We rode up Squirrel Flats today to get a look at the series of buried weak layers that we have been tracking since the beginning of March. We got mixed test results on the April Fool’s interface as well as the late March surface hoar, with some tests propagating under a large load, and others not propagating.

As far as surface problems go, we saw a lot of snow blowing around in the alpine. We also saw southerly slopes heating up in the day, with some rollerballs and a few small loose wet avalanches in the treeline elevation band in the afternoon.

Snow bridges across the river and creeks down in the Placer Valley are starting to break up, making route finding a little bit tricky just getting across the valley.

No major red flags. Cuts along small test slopes got the occasional thin slab to release at the surface. These were only 2-4" thick, and were comprised of the new snow from last night and this morning.

It was mostly sunny for most of the day, with some cloudy periods. Easterly winds were calm to light below 1500', but moderate with strong gusts above 2000'.

Crusts and wet grains on the surface to about 1500'. 2-4" new snow from last night on top of about a foot from the April Fool's storm.

The April 1 storm has settled to about 12-18" depth. This layer was sitting on top of a thin crust on easterly aspects, a thick crust on southerly slopes, and dry snow on northerlies. We didn't get a chance to dig on a west-facing slope, but it is most likely on top of a thin crust on westerlies as well. We got a propagating result on the layer in the southerly pit (ECTP 19), but not in the easterly or northerly pits (ECTN17, ECTN24).

We got another propagating result on a layer of surface hoar buried about 2' down in the east-facing pit (ECTP30). This layer propagated in one test but we could not get it to go again. We were a bit puzzled by the depth of this one. It was deeper than the April Fool's day storm, but it seemed like the 3/22 interface should have been deeper. Our best guess was this was the 3/22 layer, but the slope had seen some scouring at some point. That storm system should have dropped somewhere around 4-6' snow around the area we were digging in.

The snow was unsupportable and isothermal at lower elevations in the afternoon. There was a supportable crust in the morning, but you could stomp through it into wet snow with some effort. In our south-facing pit at 2000', the crust was just starting to melt out at around 3:00, and there was moist snow down to about a foot deep.

We saw one more fresh looking glide release over on Shark's Fin from across the arm as we were leaving Girdwood this morning. 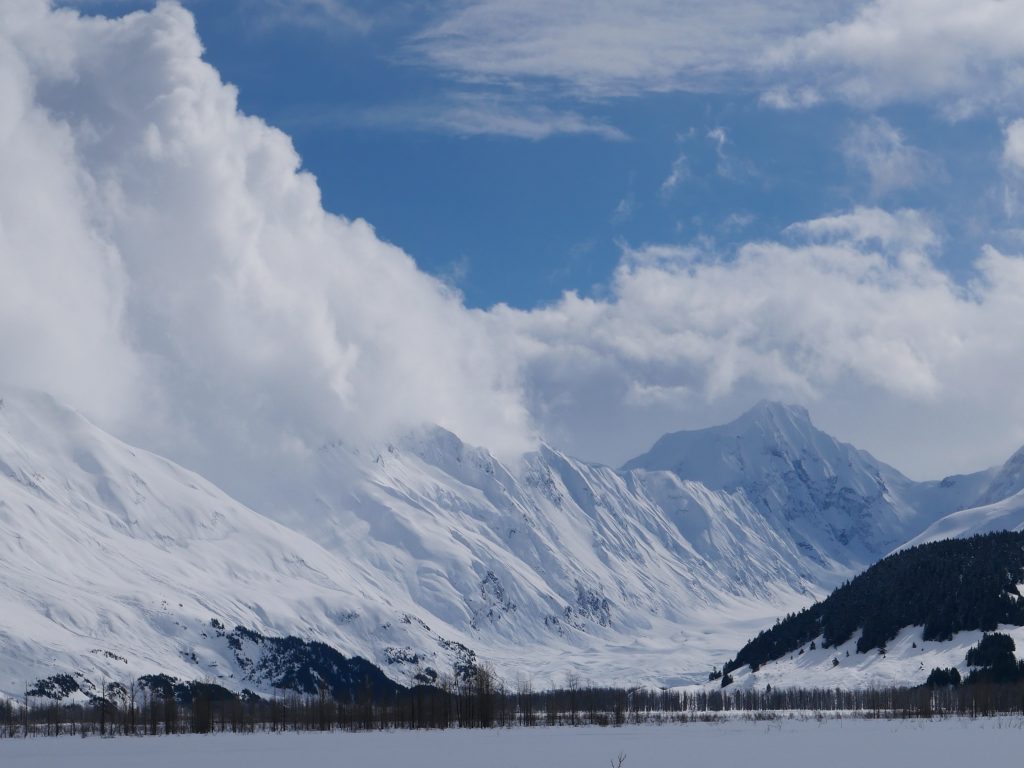 Debris at the bottom of most of the steep south-facing paths in the Skookum Valley. 04.05.2022 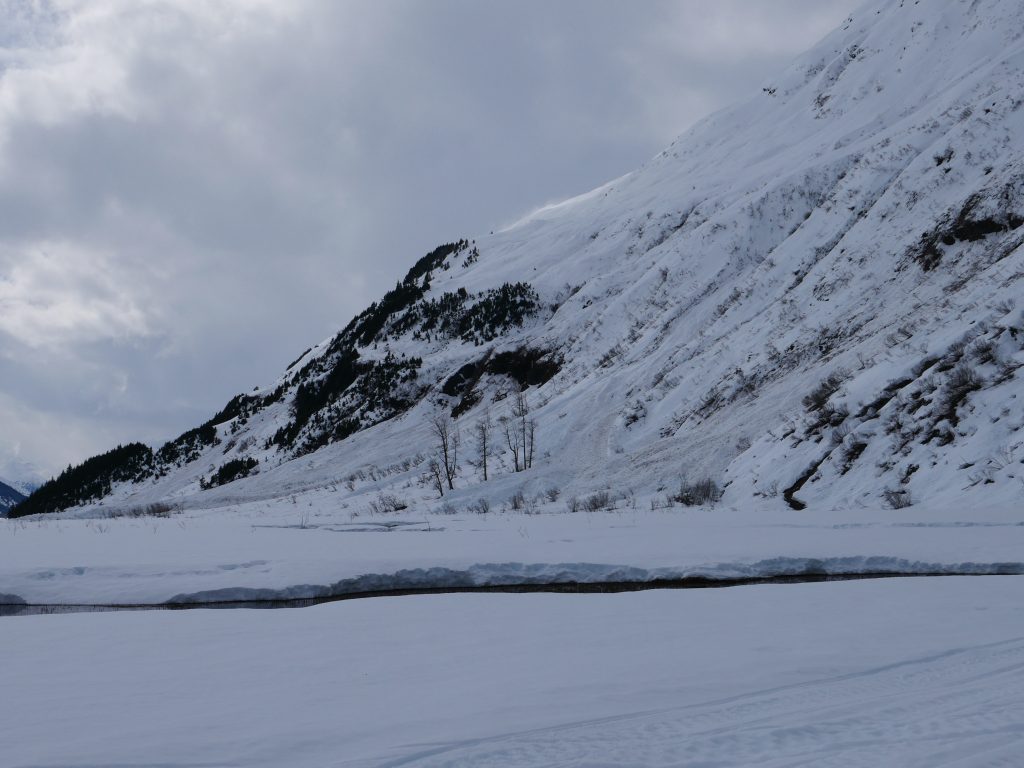 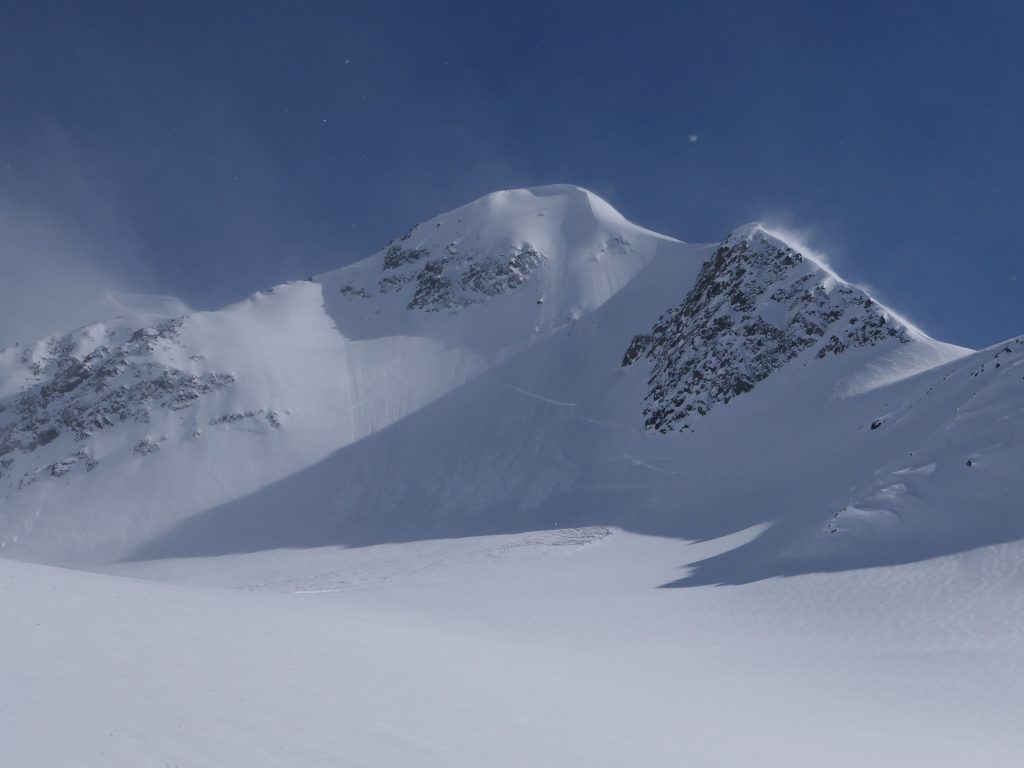 Snow blowing off the ridgeline above an older avalanche on the northwest side of Comet. 04.05.2022 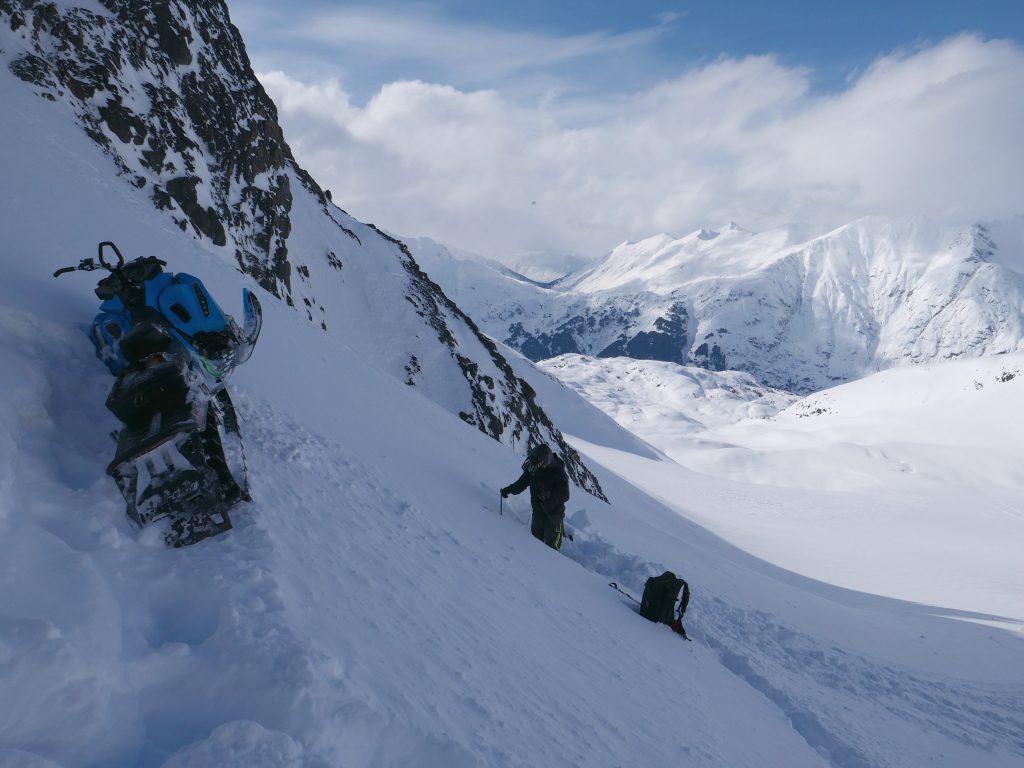 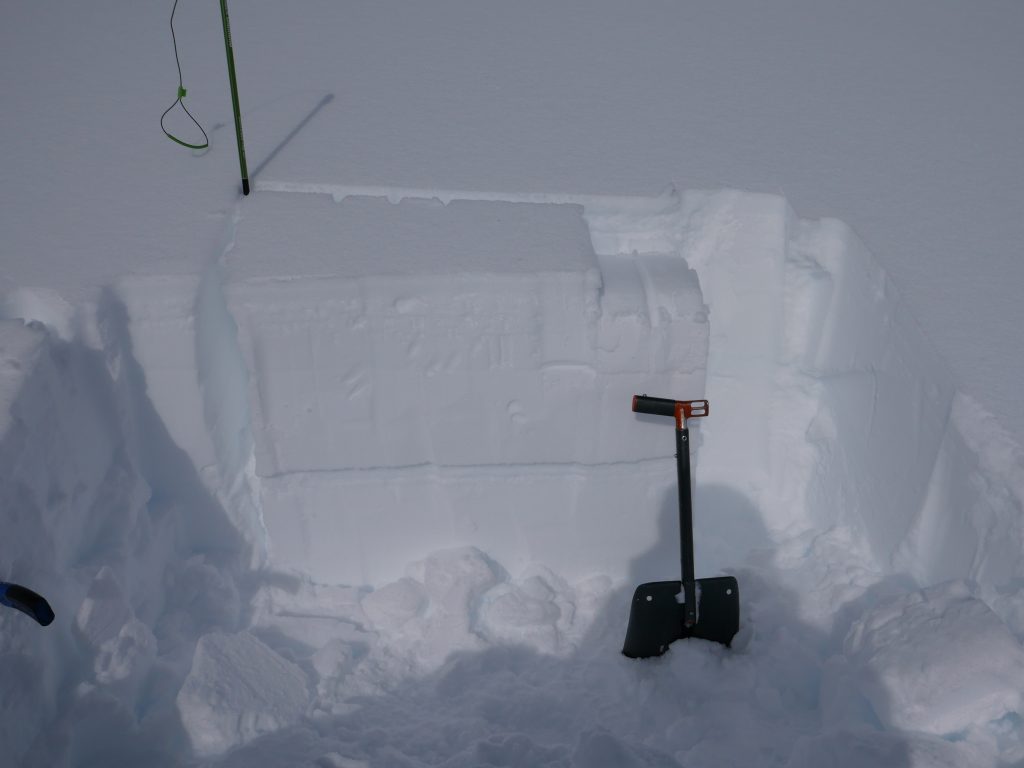 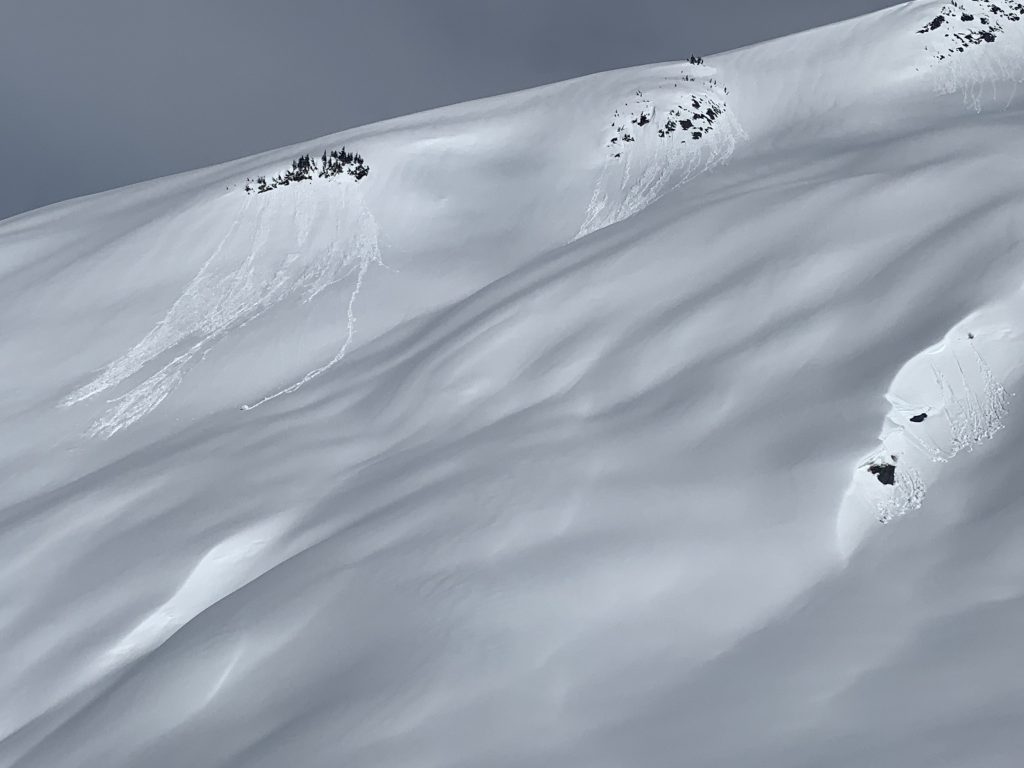 Rollerballs on a slope that was cooking in the sun this afternoon. 04.05.2022 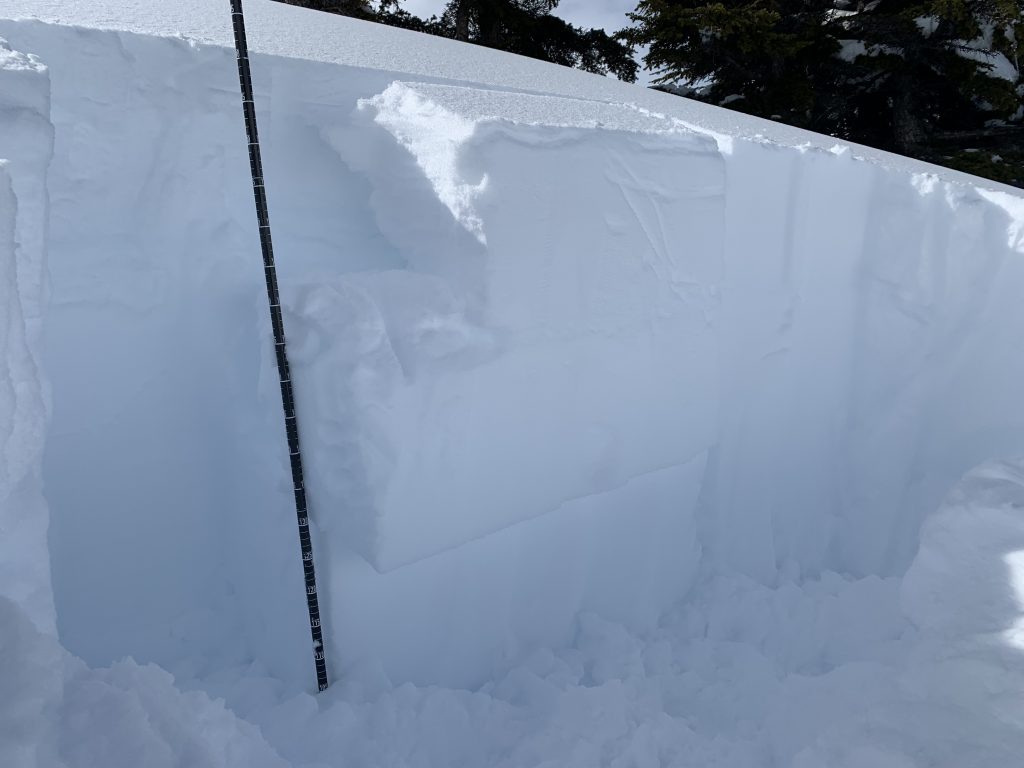 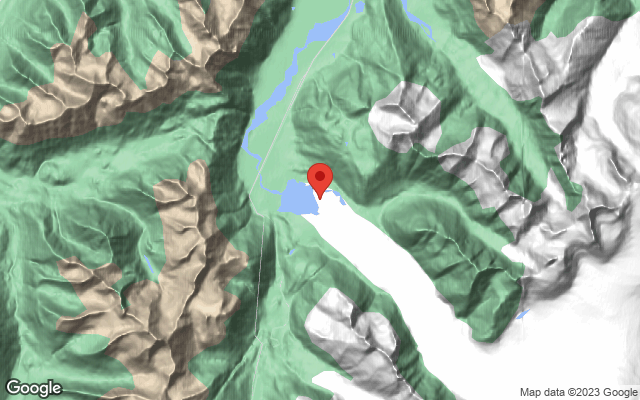