We started the morning trying to ride into Johnson Pass from the south end of the pass, but turned around early on when we realized the coverage is still to thin to get in that way. We headed to Snug Harbor to try to get some riding in, and were able to ride around the V-Max area. We saw one recent avalanche that failed on a layer of facets below a crust buried 1-2′ deep and dug a pit on a slope just around the corner from the avalanche.

**Note: This area is one of the periphery zones outside of our core advisory area. We don’t get here quite as frequently as we do Turnagain Pass or Girdwood, but we try to keep an eye on conditions because it is a high use area.

The avalanche was on a wind loaded slope. The crown was 1-2' deep and it failed just below a thin crust. There were a lot of tracks adjacent to the avalanche, so it was hard to say if it occurred naturally or if it was triggered by a snowmachine.

Skies were mostly cloudy with increasing clouds through the day and light snow by the time we were heading back to the truck. Moderate easterly winds were blowing snow around down to around 2600'. Temps were in the upper teens to mid 20's F.

I had time to dig a quick pit near the avalanche and check out the crown up close. The avalanche failed on a layer of facets just below a thin crust. Hard to say if the crust formed during Christmas or New Year's, but the avalanche looked to be a day or two old.

With active weather on the horizon, the most concerning layer will probably be the surface hoar and near-surface facets that have made for such good riding conditions these past few days. It seems this layer is present throughout our advisory area and the surrounding zones. The other problematic layer is buried deeper in the snowpack- about 3' deep in our pit. It is under a thick hard slab and it is unlikely a person would be able to trigger an avalanche on it unless they found a thin spot.

Overall, the structure has some red flags, but we did not get any alarming test results. With a big enough load, it would not be surprising to see big avalanches on any of the three weak layers mentioned here. 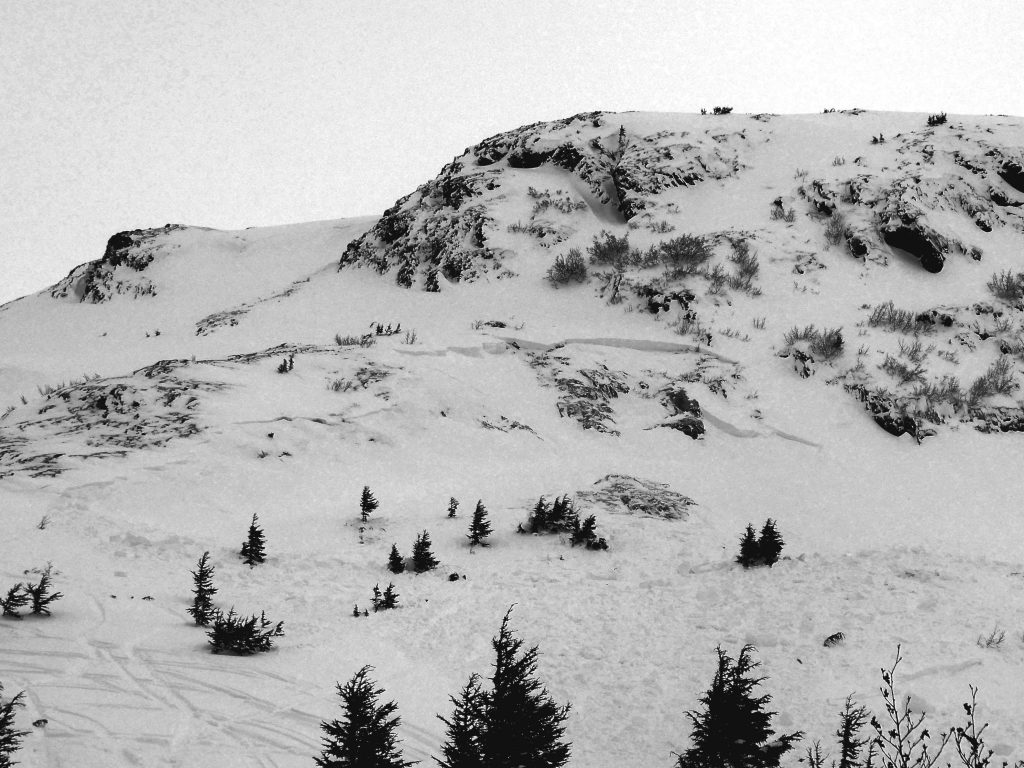 We saw this avalanche on our way in, it was on a west-northwest slope at just above 2500'. The avalanche was 1-2' deep and failed just below a thin crust. There were a lot of tracks adjacent to the avalanche, so it was hard to say if it occurred naturally or if it was triggered remotely by a snowmachine. 01.09.2023 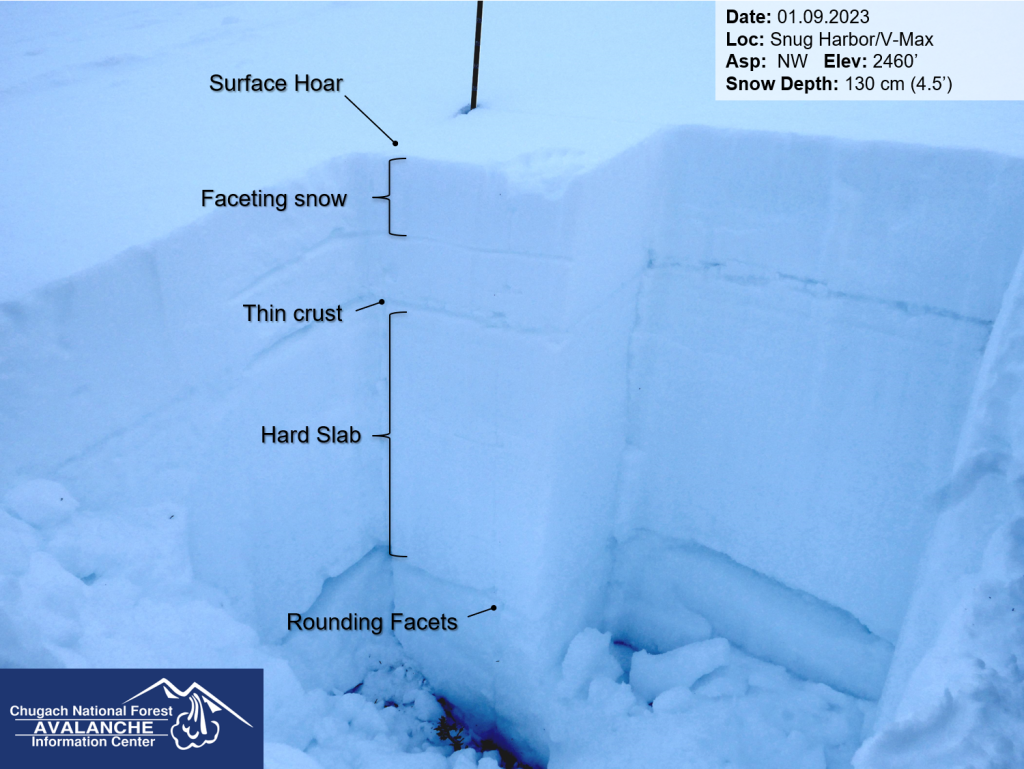 This snow pit was right around the corner from the avalanche we saw. The avalanche failed on a wind-loaded slope just below the crust. 01.09.2023 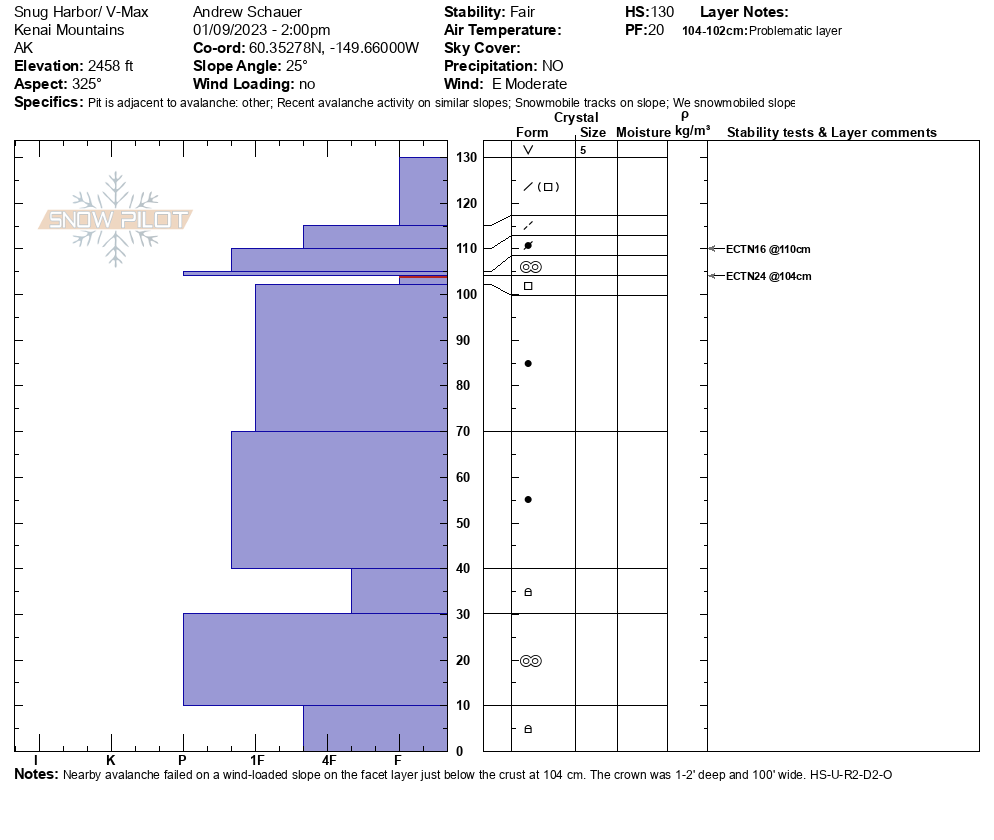 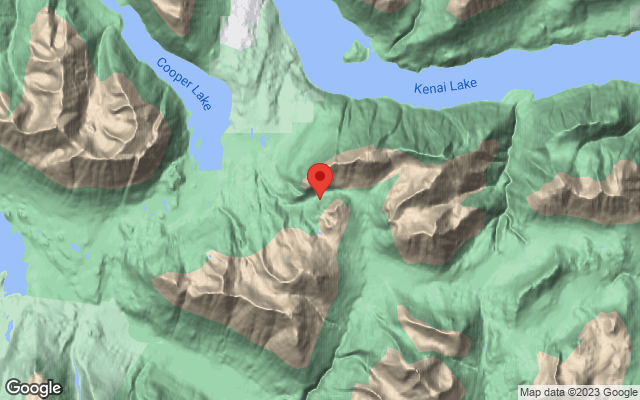