Rode from the Ingram parking lot over to the toe of the Skookum glacier and up into the bowl on the south side of the drainage. High point around 2,700′. Creek crossings are much more frozen that a week ago.

In and out sun and clouds.
Temps in the teens and winds calm in the valleys.

Soft settled powder with some surface hoar growing on top. The last storm (Dec 9-10) looked to have been around 2.5 feet that has now settled to around 1.5 feet. There are some crusts in the top couple feet at sea level due the past few storms fluctuating near rain at times. This goes away around 500'.

We dug one pit at a lower elevation location (1300') that looked to represent those steeper slopes near the top of the trees where someone might be able to trigger a slab. Total snow depth was 180cm (~6 feet). Depth to the Halloween crust was 80-90cm (3 feet). ECTX, then with the boot kick on the shovel the facets failed and propagated. Only did this one test. Indicative of a hard to trigger, but uniform weak layer.

We also noted several old large slabs that look to have released around Dec 9-10 during the last storm. These most likely failed in the facets on the steeper slopes at elevations between 2000' and 3500'. Most crowns were partially filled in by winds over the past week or so. Snow pit above (1,300') showing the facets that failed and propagated after a boot kick... Large natural slab with a crown around 2,000'. Several others seen as well littered about, but this one was the most striking. Note the unsupported slope. Another large slab seen on the other side of Skookum drainage just below the ridgeline (~3500', S aspect). A bit hard to see in photo. Looking up drainage toward Carpathian, light was a bit flat... 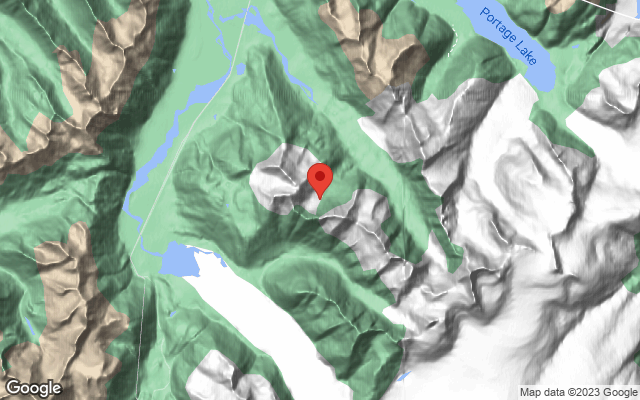