Rode up to Seattle Ridge. Headed to clean off the weather station but Tom and Luke had just finished clearing the rime and got the anemometer free (thanks guys!!). We took stock of all the recent avalanche activity from the past few days. Most of which occurred sometime on Wednesday or Thursday (4.14/15). No confirmed natural avalanches seen today in Turnagain, but there were three snowmachine triggered slabs discussed below.

Bed surface was the old hard wind affected snow that likely had some form of sun crust associated with it. You can see anti-tracks in one of the bed surfaces. Photos below.

One cornice fall along a large moat triggered by a snowmachiner.

Hot and sunny. High 40'sF in parking lot and around 35F along the ridgetops.
Very light easterly breeze at times on ridge.

North aspects: Even at elevations around 3,000' the surface was stiff and slightly moist (cream cheese feeling).
South aspects: Became wet in the top 1-4" by later in the day with warming.

We dug one pit at 2,000' near a natural avalanche. East facing, photo below. ECTN 22 at the new/old snow interface. There was colder new snow at the bottom of the slab where it released.

Despite the test result showing no signs of propagation, it was clear that the storm snow was not bonded in many areas. Especially southerly facing slopes where the slab was heating up by the intense sun and becoming more reactive.

The bottom line is the snowpack is beginning its springtime transition. The new snow from last week is the first to be affected. These storm snow slab avalanches remain a concern along with wet snow avalanches and cornice falls. 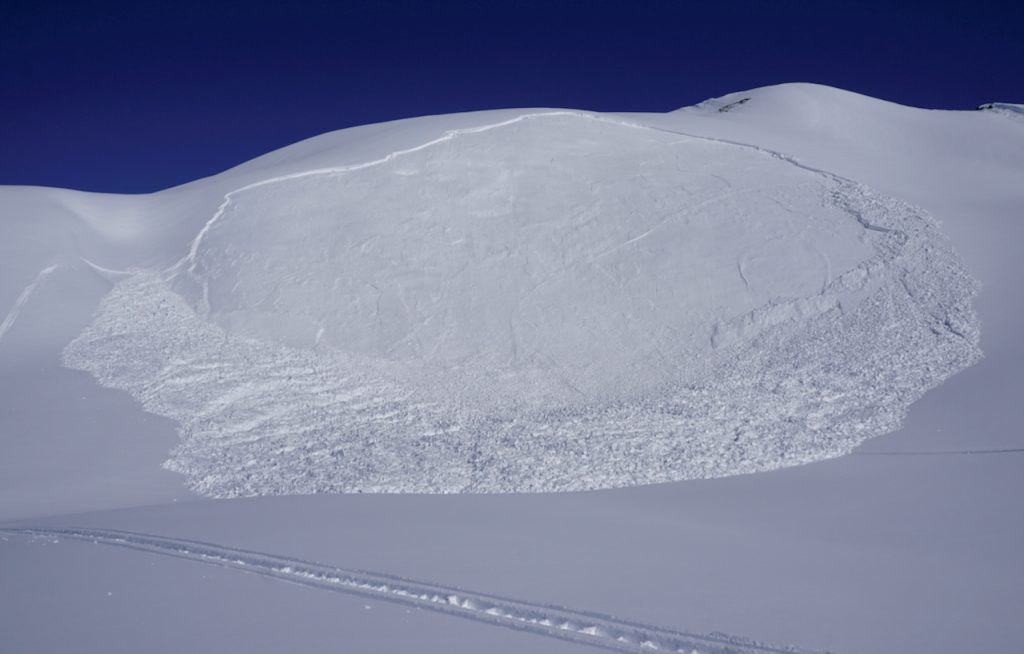 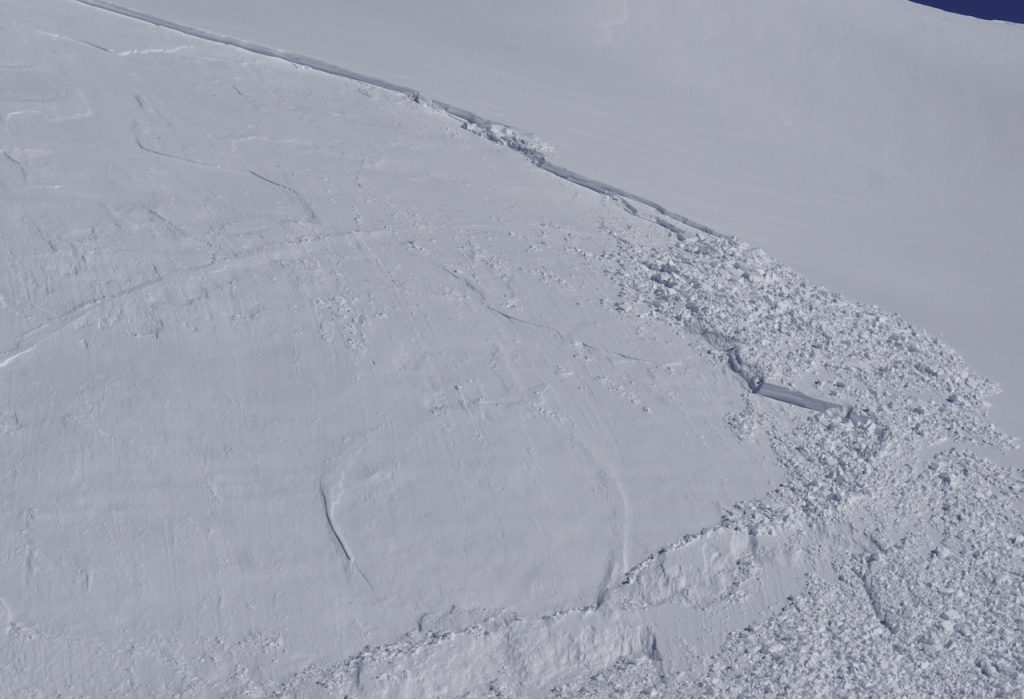 Close up of right flank of slab. Note the old tracks in the bed surface. 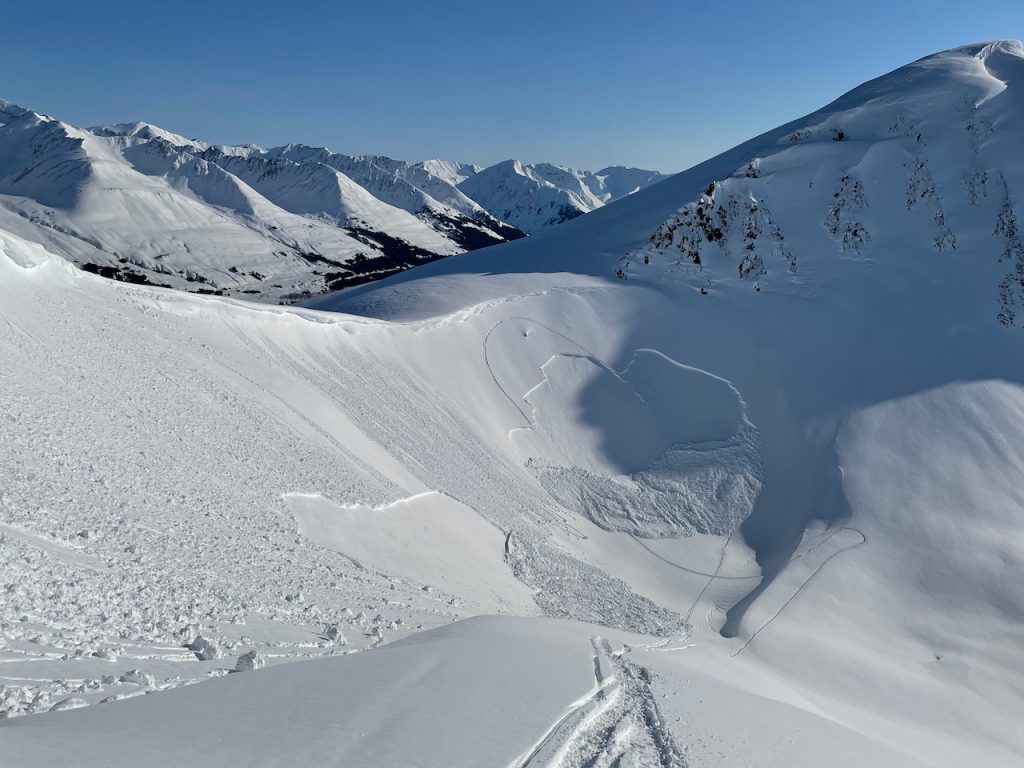 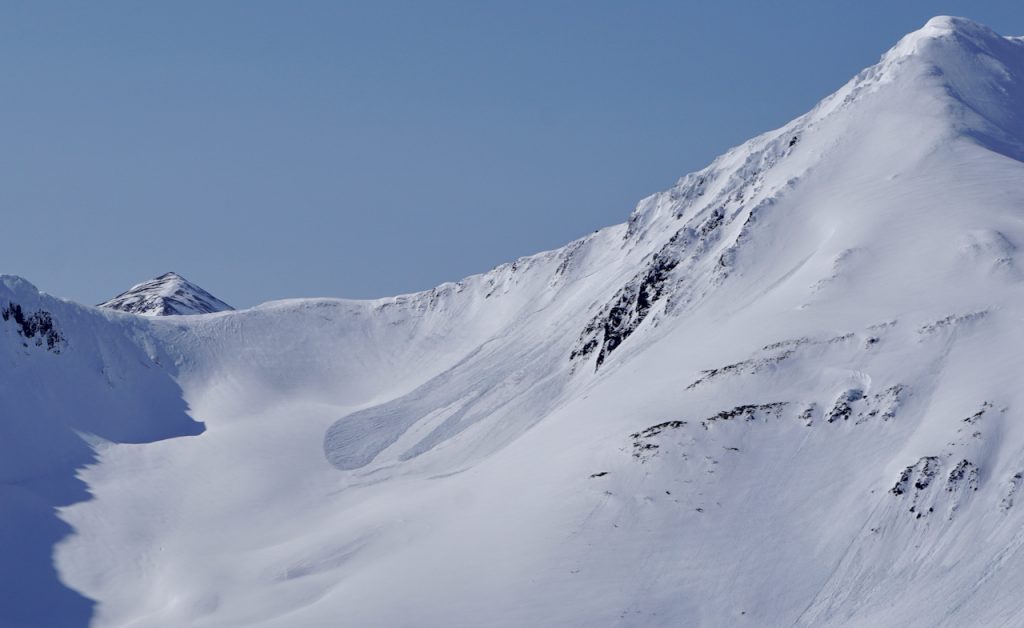 Natural wet loose/wet slab avalanche off the south side of Big Chief from one or two days prior, 4.14 or 4.15. 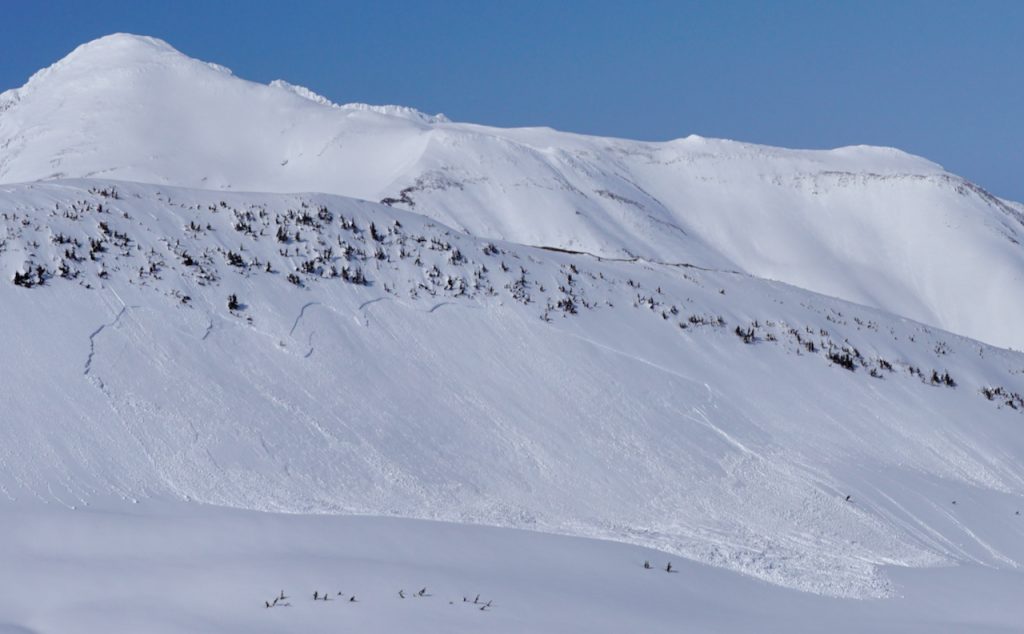 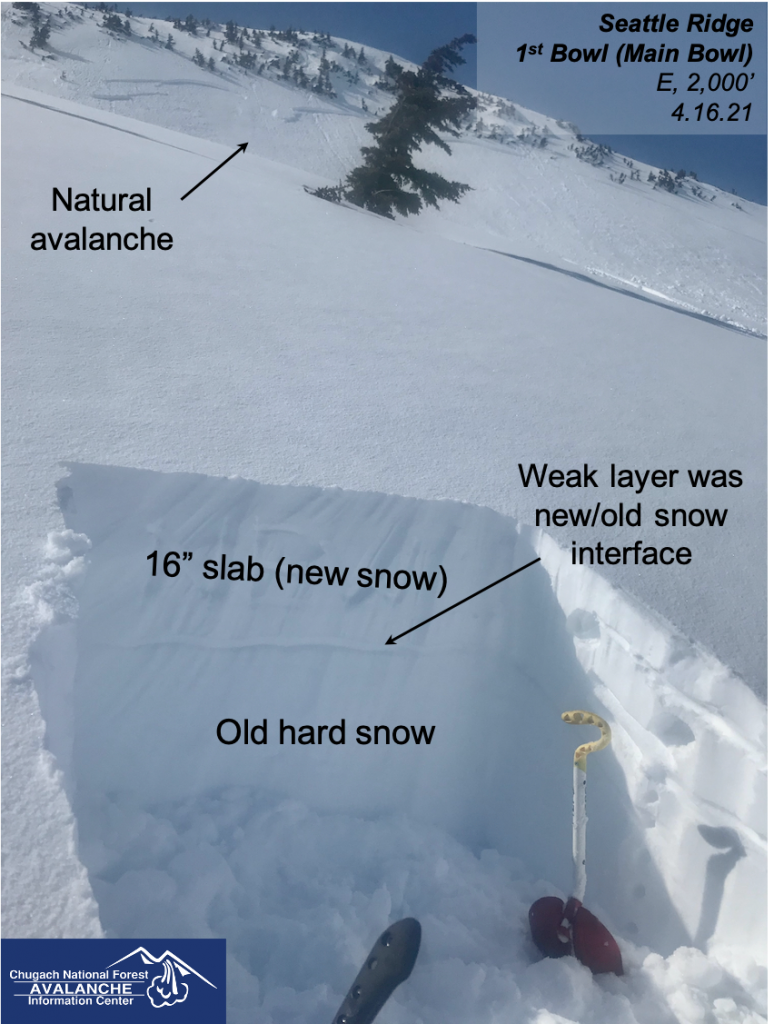 Snow pit near the toe of this slab 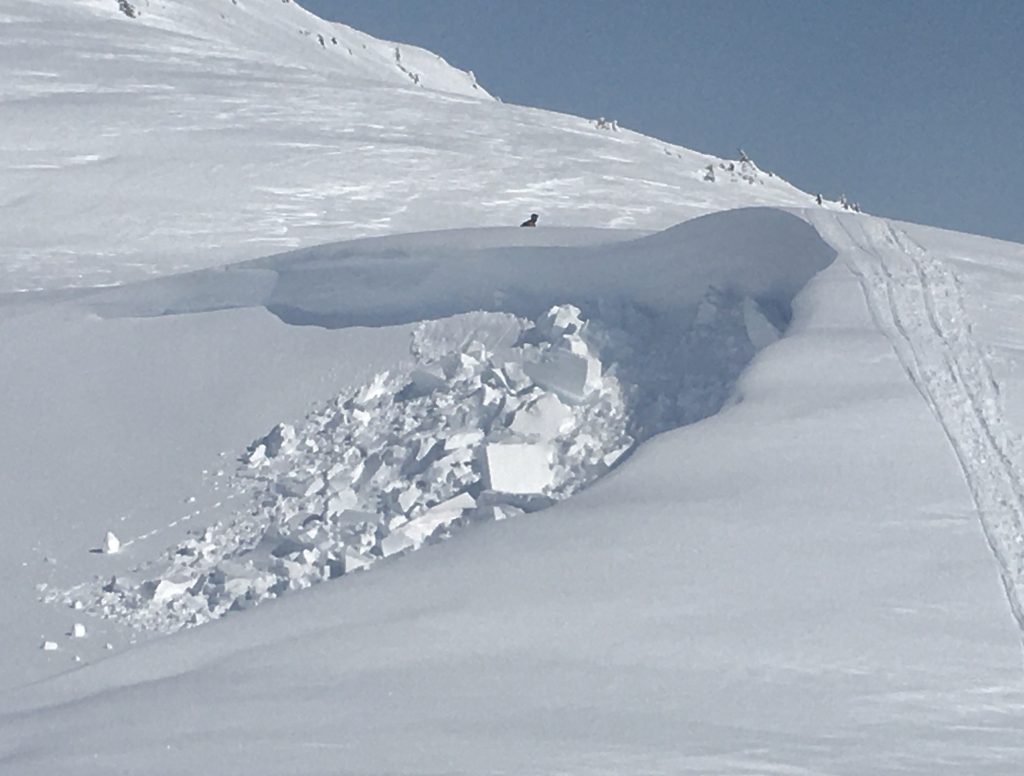 Cornice break triggered by a machiner 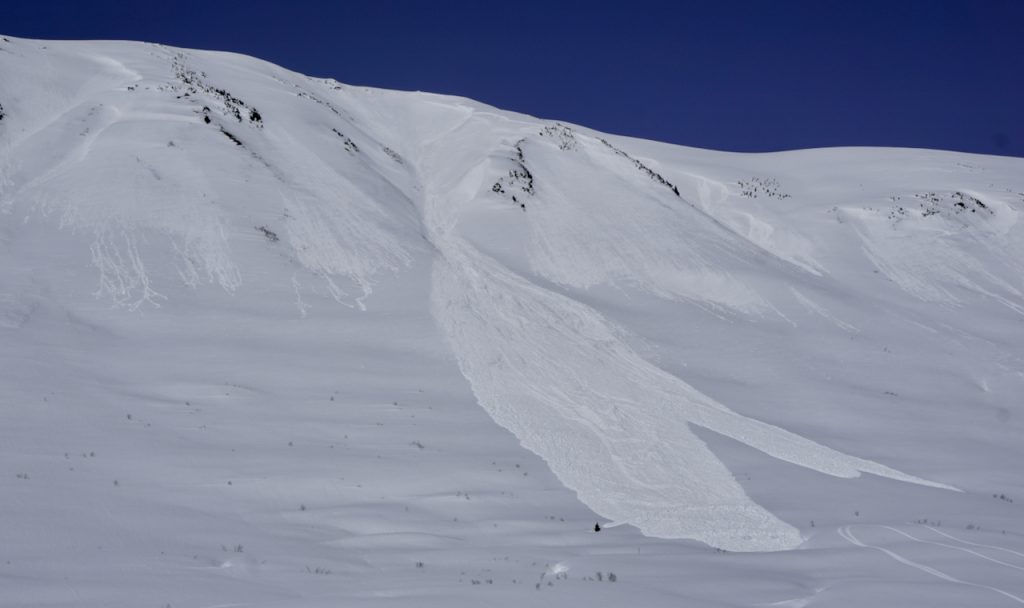 Natural storm slab that released near the ridge and entrained wet snow on the way down. Older slide from 4.14. This is the road side of Seattle. 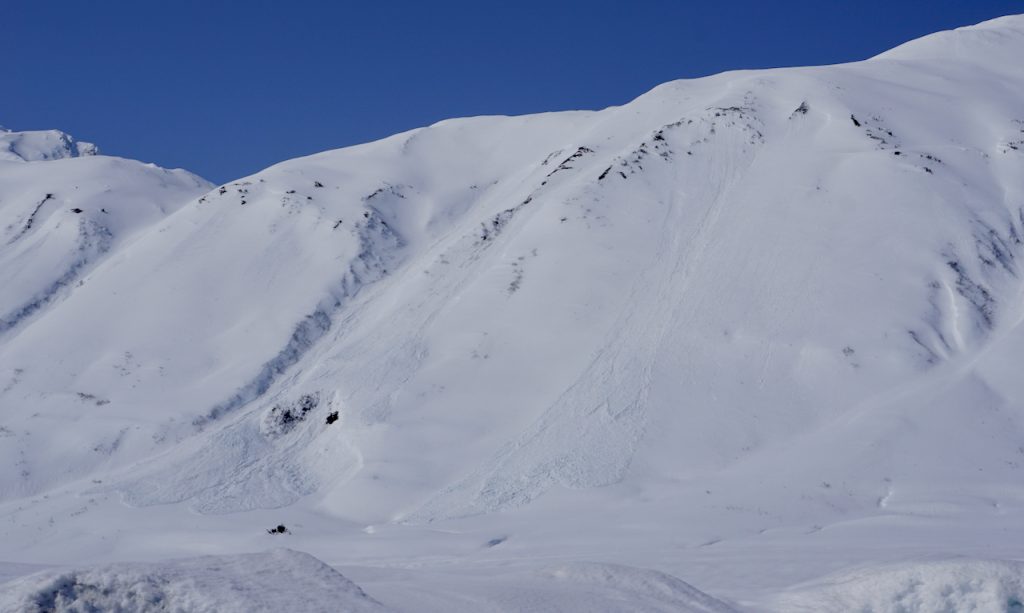 More older natural slabs/wet loose avalanches on the road side of Seattle Ridge. 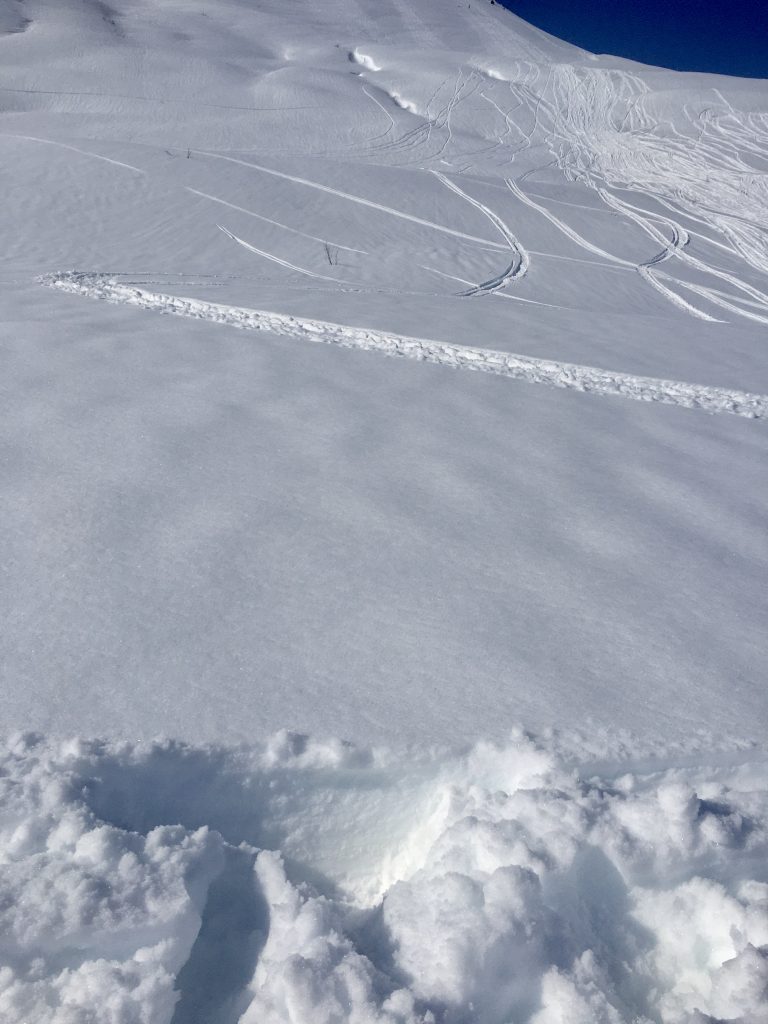 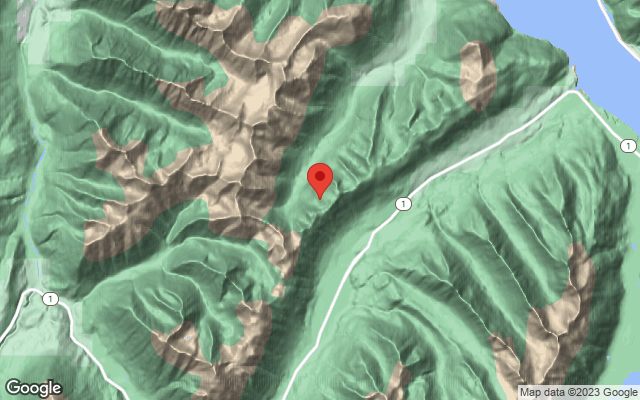