This avalanche occurred around the same time as the Repeat Offender avalanche.
It produced two sympathetic smaller avalanches (to the right in the photo) which
sent debris in the general vicinity of the original slide. No other recent,
full depth natural avalanches were observed on this day. The starting zone
appears to hold very weak snow, with a horizontal line of vegetation on a steep
rollover.

This avalanche is an example of the ‘low likelihood/high consequence’ situation
we are dealing with. The chances of relatively large natural avalanches
occurring were “possible” on this day but not likely. The amount of debris
moved as a result of this avalanche was enough to “bury or destroy a car, damage
a truck, destroy a wood frame house, or break a few trees”, and certainly bury
injure or kill a person. This illuminates the unpredictable and unmanageable
nature of deep slab instability. Choosing terrain that is low angled and not in
the runout of steeper terrain is the only way to truly avoid this problem. You
may get away with venturing onto bigger steeper terrain, but it’s a roll of the
dice. Determining where it will be more likely to trigger an avalanche is very
difficult at this point in time. 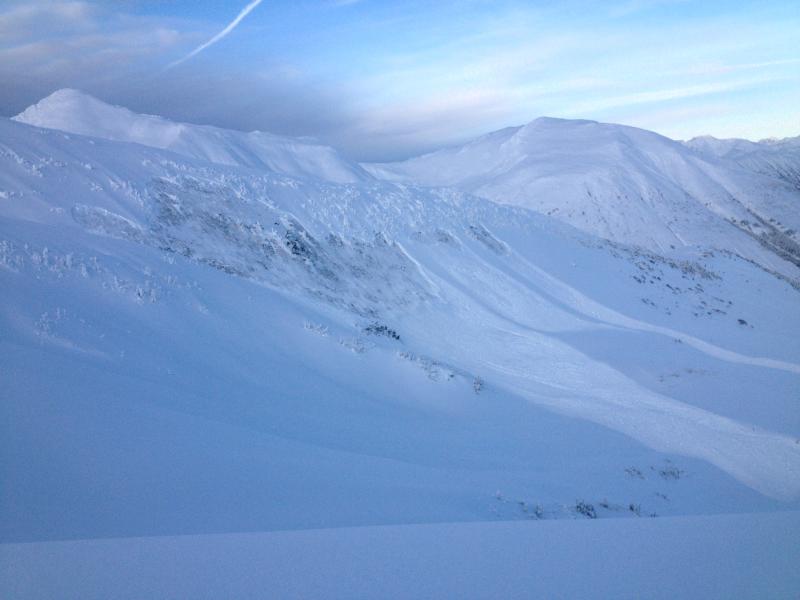