Several snowmachine triggered slab avalanches in the Seattle Creek Headwall area between Saturday and Monday (March 19-21, 2022). No one was caught that we know of in any of these. If someone has more information to add, please send and email to staff@chugachavalacnhe.org and we will update.
Thank you to the various people that were in the area for sharing their photos and information!

We have photos of two avalanches on opposite sides of the Seattle Ck Headwall and one cornice fall. We are thankful everyone was ok, it was a very active weekend for avalanches...

The numbers above are estimates of the avalanche that occurred on Monday, March 21st. It is on the far east corner of the headwall; the first photos shown below. There were several tracks on the slope before it slid - both the day before as well the day of. We do not have information on the exact trigger. This slope accesses an area called the New World and was the same slope a rider was fully buried in in 2017, he was rescued uninjured by his group. That report can be found on our accidents page.

The other avalanche is from Saturday, March 19th. It was triggered by a snowmachiner on the western side of the headwall.

We had reports of 1-2 other similar slab avalanches near the headwall but do not have photos. It is suspected that all these slides released on the March 16 buried surface hoar. This layer is generally between 12 and 16" deep in this area. It has caused many more human triggered avalanches as well further down the Seattle Creek drainage and on the westerly facing slopes of Seattle Ridge itself (documented in our observation page).

Last, a snowmachiner triggered a cornice break on the far western side of the headwall. The rider fell with his machine and the cornice several hundred feet or more. The rider was uninjured, but the snowmachine was damaged. Both rider and snowmachine were lifted out with a helicopter. 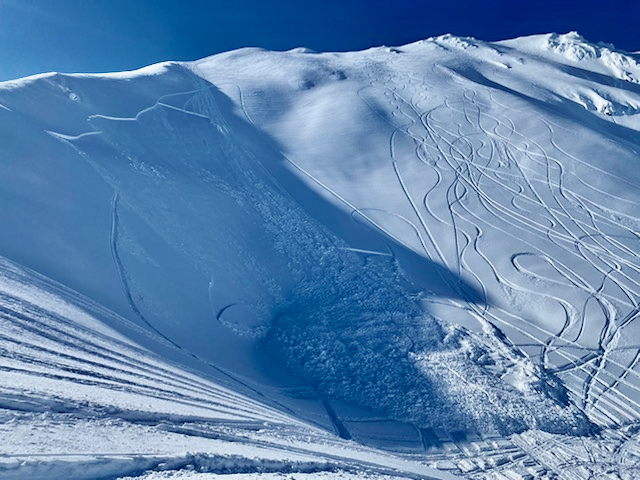 Seattle Ck Headwall avalanche that released after several tracks had been on the slope. Photo by Adam Hoke on 3.21.22. 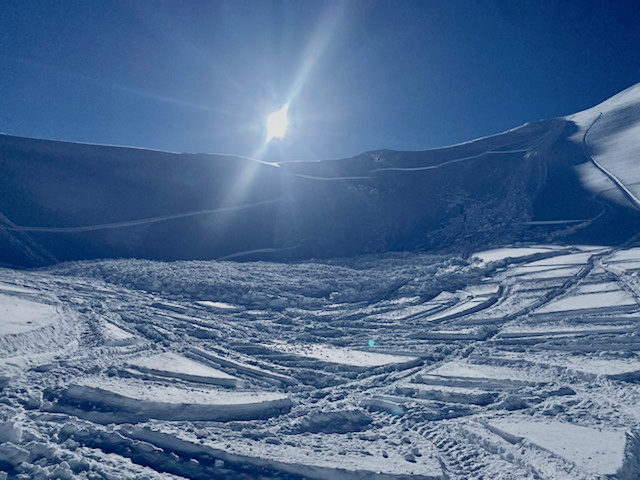 Looking up at the crown of the same avalanche mentioned above. 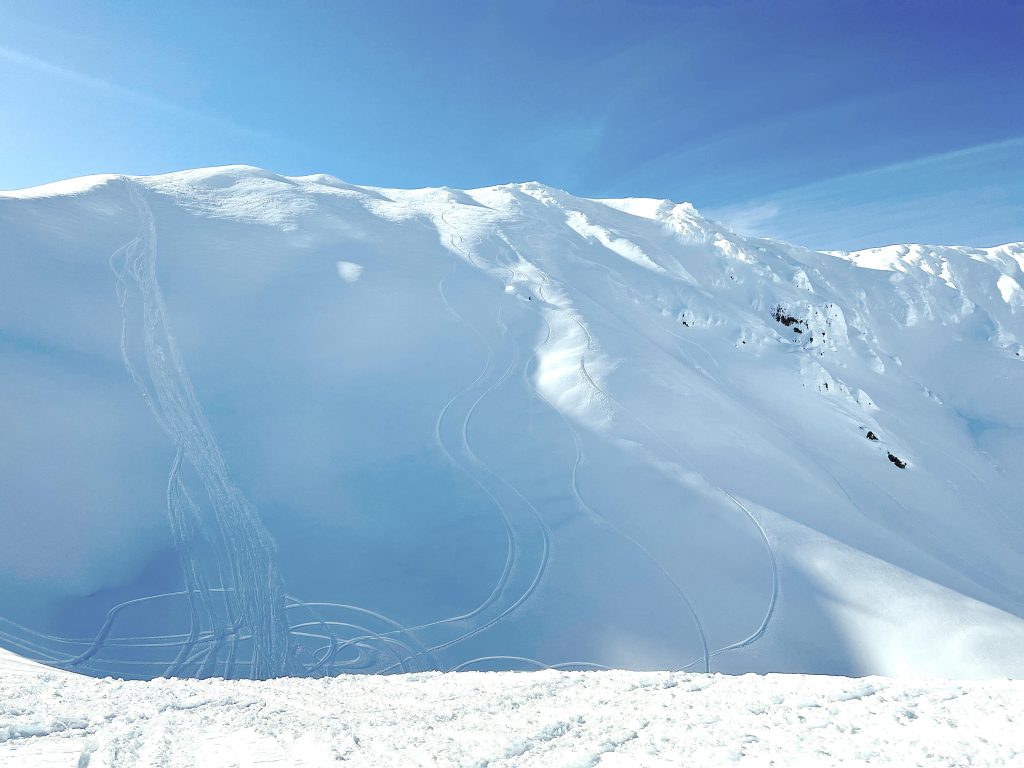 Photo of the same slope being ridden and skied many times the day before it slide. Photo by Ryan Norkoli on 3.20.22.

The other snowmachine triggered slab that occurred on Saturday, March 19th. Photo sent to us through instagram. 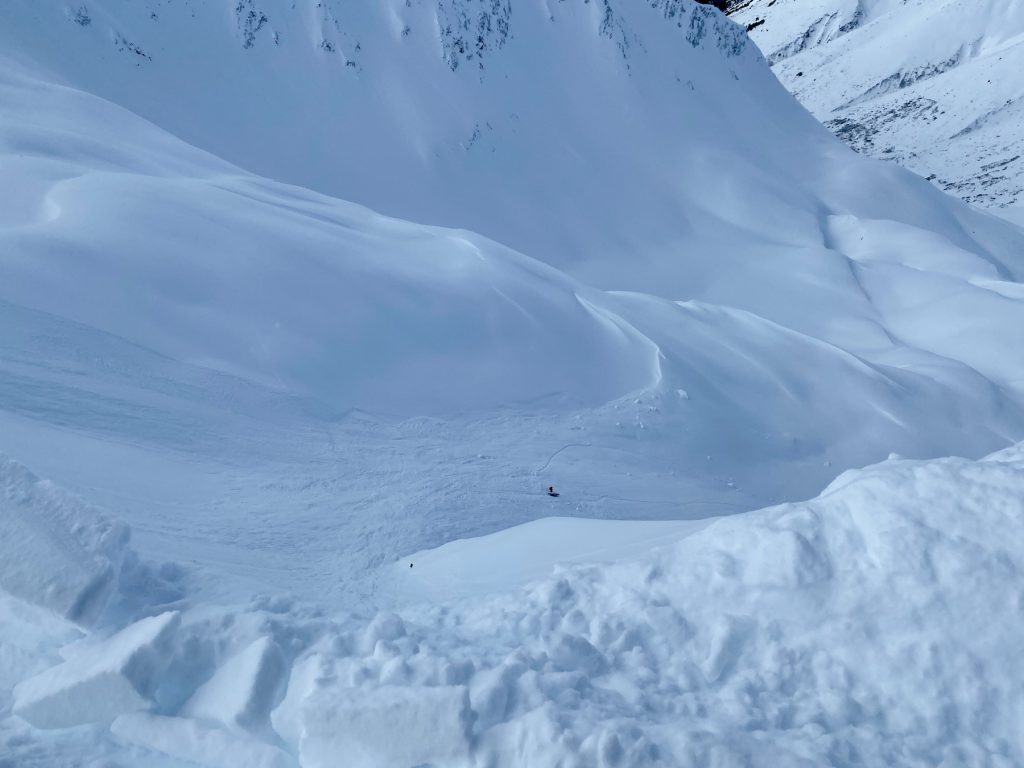 Cornice fall with rider and machine far down on the slope below. Photo by Isaac Cortez 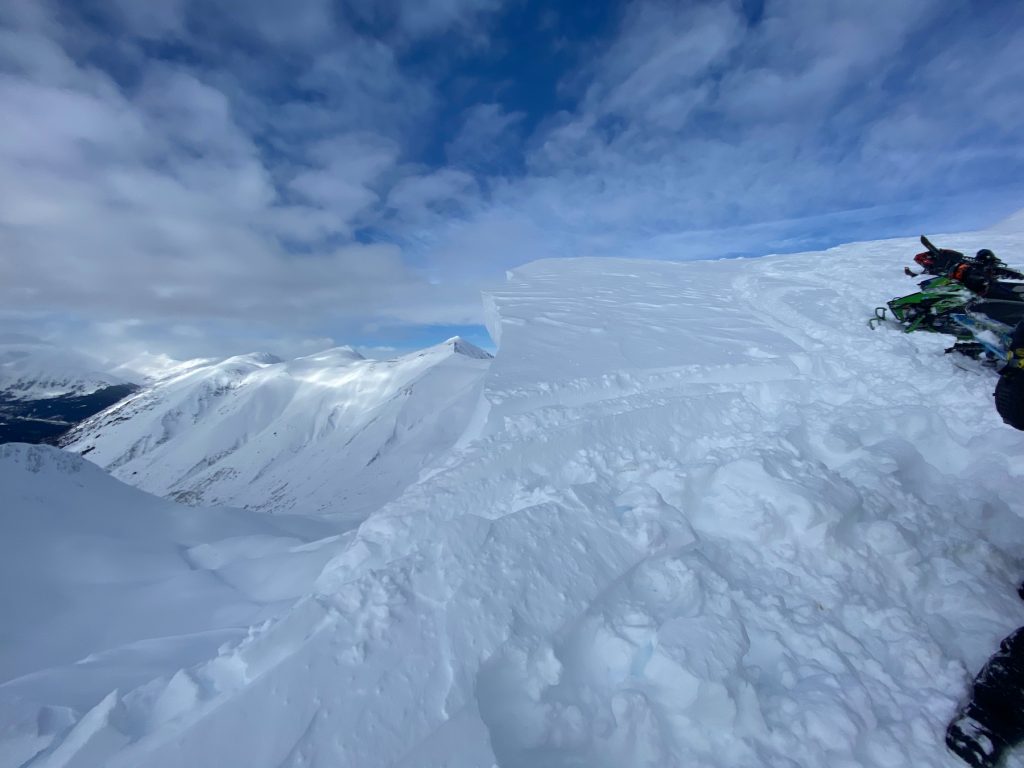 Top of ridge where the cornice broke - you can see the track turning to where the broken piece of cornice used to be. Photo by Isaac Cortez 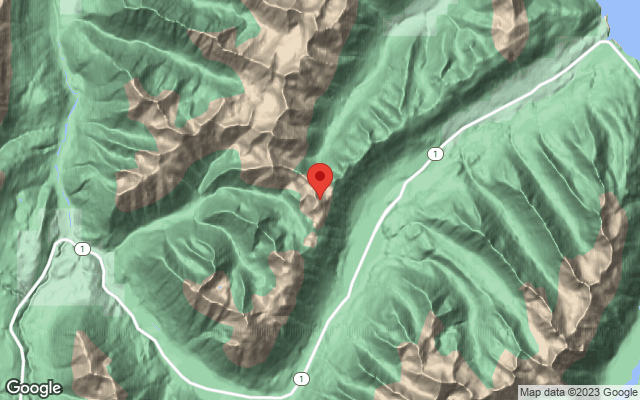