We hiked up to check out the skier-triggered avalanche from yesterday (3/21). There was a lot of wind effect, especially above treeline. After getting some data from the avalanche, we skied back to the road and went over to Magpie to get an eye on conditions.

The avalanche was triggered by a skier on 3/21. The slab was a 1-finger hard wind slab about a foot deep, sitting on top of 2mm facets, which were on top of a thin crust. The skier was able to safely ski off the slab, and nobody was caught, carried, or buried.

Thanks to the group involved for sharing the following account anonymously:

"Our group of 3 was attempting to circumnavigate Ragged Top yesterday. We crested into the upper bowl area without any issues, but started to experience localized whumping on the south face in small convexities where there was wind deposited snow. We altered our approach and ascended the SW shoulder to within a few hundred feet of the summit. After looking over into the NW face, we determined that we had already experienced a few “red flags” and didn’t have enough time or beta on the route and decided to turn around and just ski back to the car. We had no issues skiing the upper S face off Ragged Top. We skinned back up and out of the upper bowl to the top of the Ragged Bowl area. We observed some cross loading and deposits of snow from the recent wind in the bowl. I hiked just a little further north on the ridgeline to take some pictures of the other two in my group. Our first skier dropped and skied great snow for the first few hundred vertical feet. He then kicked off a small wind slab that traveled 50-100ft and stopped. Thin slab, maybe 6”, comprised of the transported snow and had very low energy in the slide. I informed the next member of our group about the small slide and he managed to avoid any problem snow areas, though we all experienced an increasing sun crust on the lower SE facing aspects. I then determined my line and saw that there was thin coverage over rocks at the top where I was standing. I dropped, trying not to initiate a heavy turn and to get my speed up quickly. I saw the small pocket of thin snow crack below my skis. I continued to ski quickly and pulled out of the obvious path as soon as possible and continued down the full run at speed. The small wind pocket produced a secondary fracture in the same general area on the thin, wind affected snow. That slide continued down the gully and picked up further snow mass from either side of the gully as it descended. I was at the bottom and well out of the way long before the slide reached the flat spot at the base of Ragged Bowl. We skied down through the trees back to the vehicle with any further issues."

Mostly sunny skies in the morning with high clouds moving in by mid-afternoon. Winds were calm with the occasional light breeze out of the south. Temperatures warmed just barely enough to see some loose wet activity starting at the rocks in the Magpie cirque.

From the crown (el. 4000', E aspect, 39 degree slope):
Surface was 2 inches of soft snow on top of a stiff (1-finger hard) wind slab that was about 10" thick. The weak layer was a layer of facets about 2" thick, which was sitting on a thin sun crust.

The east-facing slopes on Magpie had a similar structure, with facets on top of a sun crust, but less wind effect. Some northeast slopes did have the same 1-finger hard wind slab, while others still had soft snow. 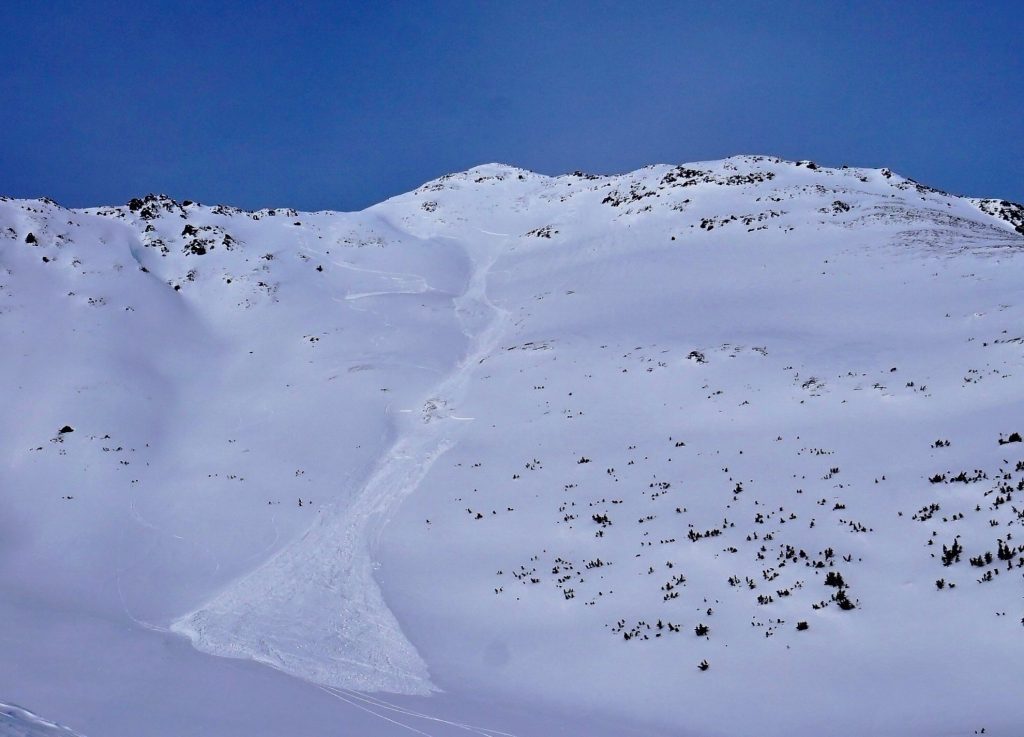 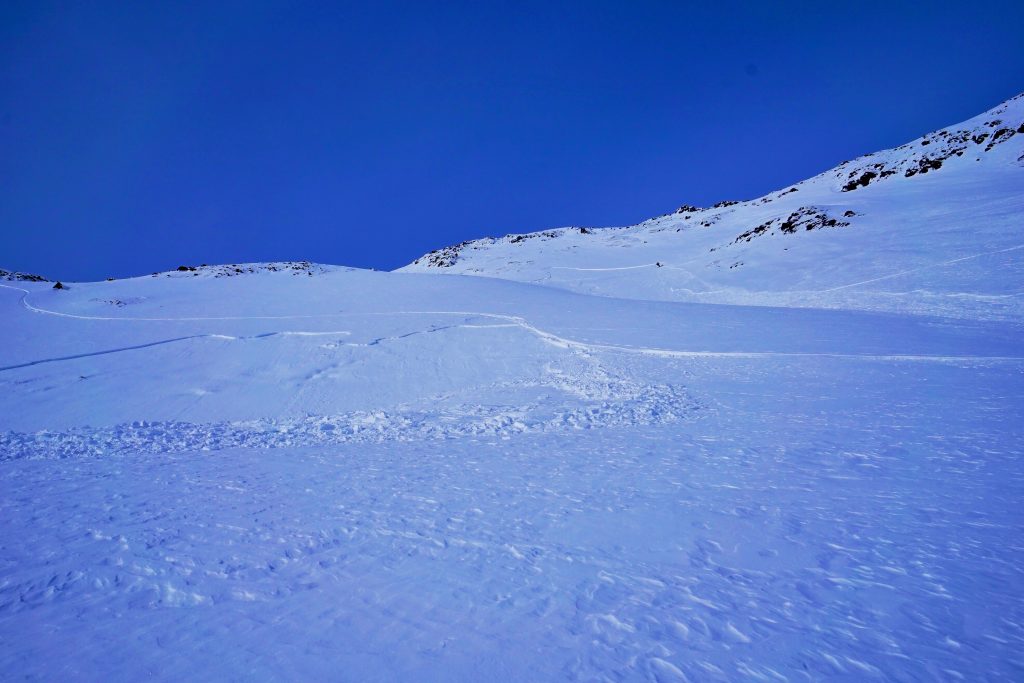 Looking up mid-slope, with the smaller slab (foreground) triggered by the first skier in the group, and a portion of the crown of the wider slab in the background. Photo: Karsen Cullen. 03.22.2021 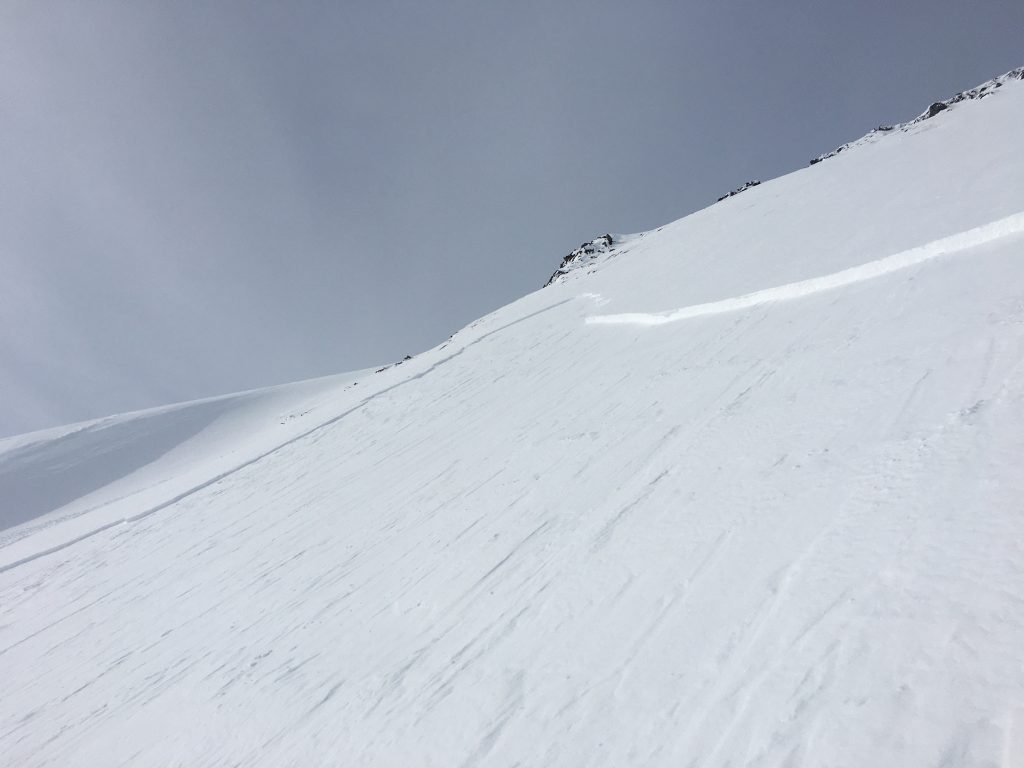 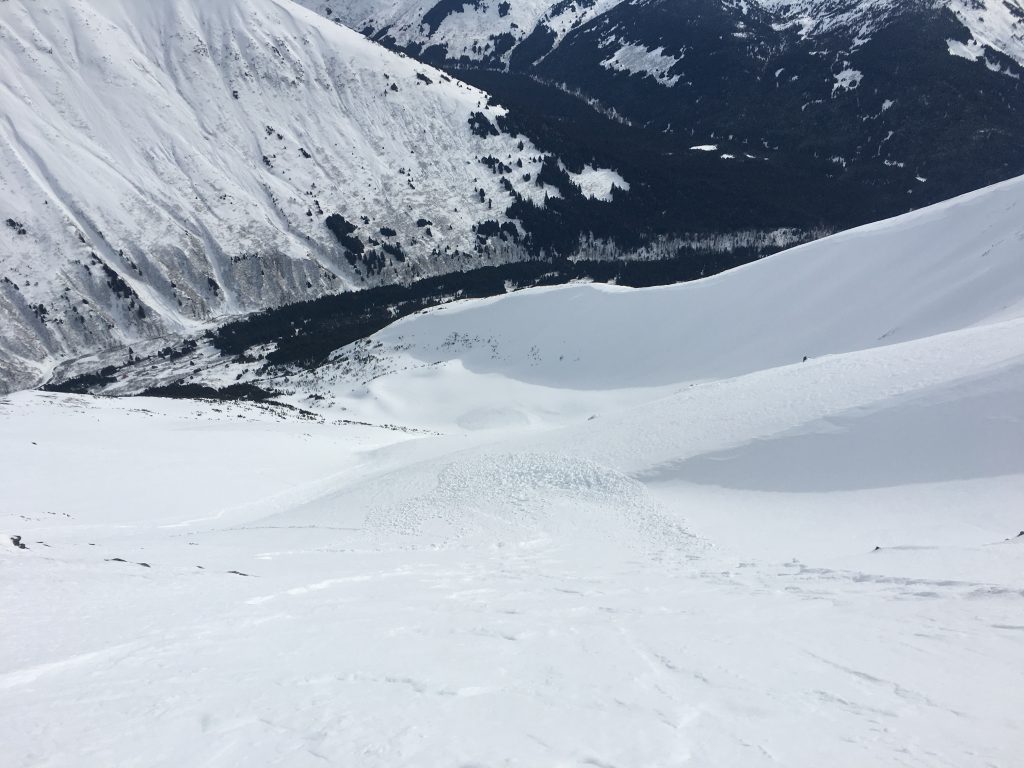 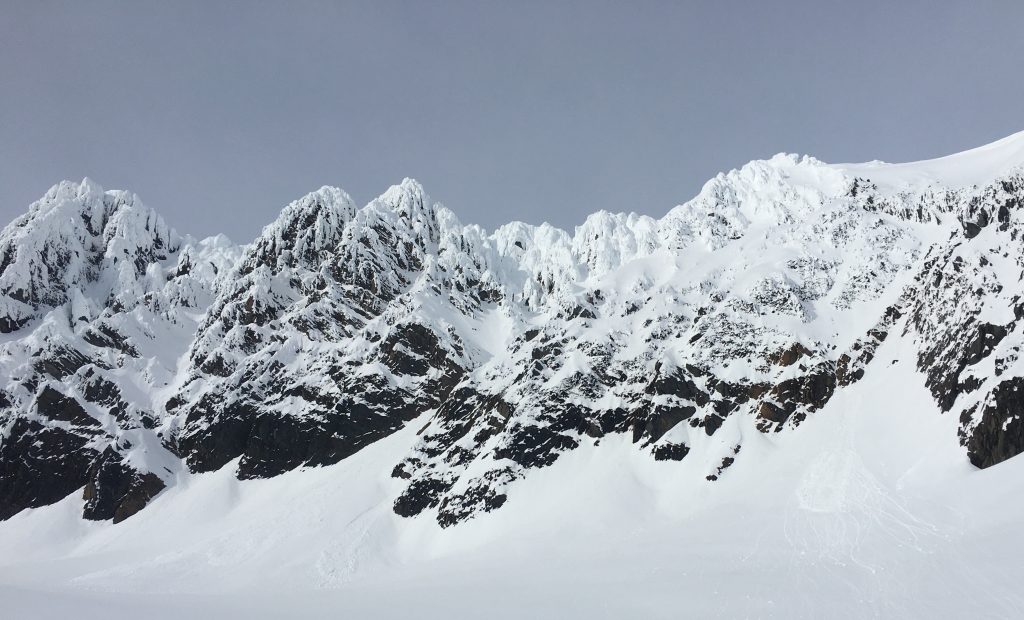