On Saturday March 16 toured from Johnson Pass parking lot up Pete’s South.
Rode steep NF terrain on Pete’s South ended run at base of climb to the bench
between Pete’s South and Pete’s North. Snow on NF aspect of Pete’s North was
surprisingly stiff due to extended exposure to wind (upper SF of Pete’s South
definitely had better snow#. While skinning up the bench I noticed a punchy
wind slab under the mid-week’s new snow while breaking trail to the main up-
track in the shadow of Pete’s South. Hand shears and jumping on the cut
corners of switchbacks would release small contained slabs on the steep shaded
westerly aspects below the bench #likely result of down valley wind#. The
upper layer of the snow pack was 8-10 cm of new decomposing snow #loose/fist#
from middle of last week on top of a 3 cm stiff strong wind slab #firm/finger#
on top of a 1 cm layer of surface hoar. Took note of the buried surface hoar
below the thin stiff slab for consideration after the next storm.

We attained the bench and followed a group just ahead of us up to the sub peak
of Pete’s North immediately North of the bench on SF terrain. The group ahead
of us descended SF terrain back to the bench. One of our party descended the
steep appealing SW ramp that ties in with the lower westerly slopes of the
bench. He rode the ramp aggressively arcing big wide turns staying in the
falling line and released some heavy sluff on 45 degree terrain. His sluff
pulled out a 60′-80′ wide section #15 cm deep# of the mini slab previously
observed below the bench. The skier safely exited the slope with a good volume
of snow moving just behind him. The volume of snow released may not have been
enough to bury a skier without a terrain trap but it definitely would have been
enough to take someone for a ride. Last rider in the group descended the same
slope through the defused zone and debris, releasing only minor sluff.
Descended down drainage to highway without event. 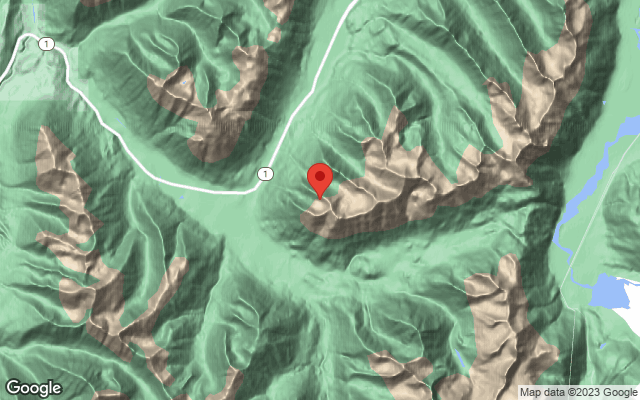