Mostly obscured skies covered Turnagain today with 1-2 inches of snow. Wind was
blowing in the annoying range above treeline and affecting the slopes. Wind
loading off the ridgeline was prevalent but wind slabs were showing minimal
cracking and no collapsing on the Pete’s North ridge. Below treeline winds were
light and soft settled powder made for great riding.

We tested slopes today by cutting several cornices, one of which was subaru size
(Ok, almost…), that did not produce any avalanches or signs of instability –
good news. Of course, we made absolutely sure no one was below, or even near in
anyway, the area in question!!

The pack seems to be settling and gaining strength well as a whole.

To check on the shallow locations around Trunagain a pit was dug in a area only
150cm deep, at 3000′ on a SW aspect – 30 deg. The pack was thin here due to wind
scouring – average pack depth in the Turnagain area is now around 3-4 meters. We
found both the January facets (5-10cm of 4finger hardness) around 90 cm above
the ground and depth hoar (10-15cm of fist hard) about 60cm above the ground. We
did get an ECTP 24 Q1 at the depth hoar layer and nothing at the January faceted
layer.

Though the pit results above show poor results at the depth hoar layer, these
are isolated areas, usually near scoured ridges. We have not seen, to date, any
avalanches failing within the older snow. The one exception is the Class 4 slide
in the Girdwood Valley on Feb 14th. 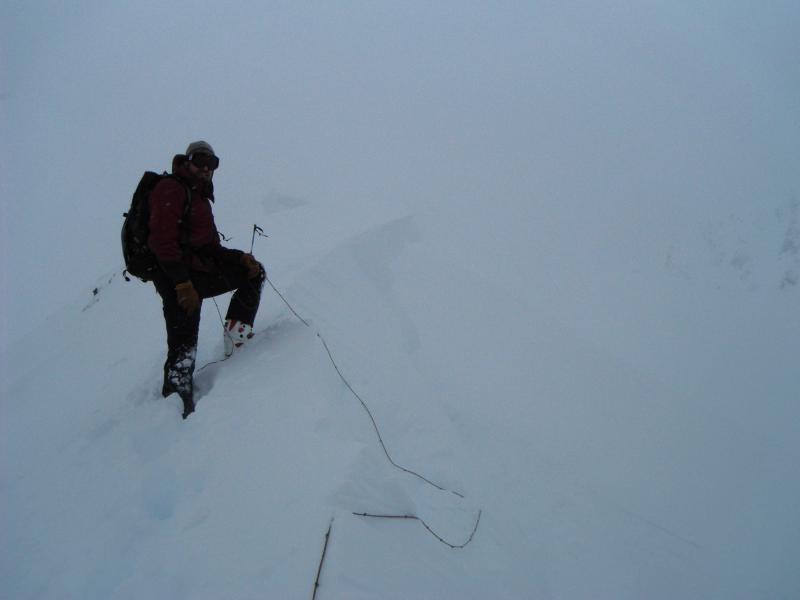 Looking for facets in shallow areas in the pack - we found em! You can see the slab clearly with the weak faceted layer scooped away below