Pit results synopsis and how it relates to likelihood and consequences of
avalanches: It is getting very difficult to initiate a fracture in many areas.
This is due to a very thick slab that is very strong on its own. Once a
fracture, or crack occurs, the ability for an avalanche to become large is high.
The general structure of the snowpack is poor, in that there is a weak layer
that is very loose at the bottom. To put it in very simple terms: the
likelihood of triggering an avalanche is very low, but the consequences are very
high.

In order for an avalanche to be initiated, a person would have to hit a very
thin spot in the slab. Knowing with certainty where these spots are and aren’t
is difficult. Warming temps and new loading might encourage fracturing as well.

The facets that were formed beginning in October are still large, dry and have a
lot of pore space between grains. This layer is intact; we will continue
tracking this layer over time. While it may be impervious to human triggers for
now, it is still there, lurking below. 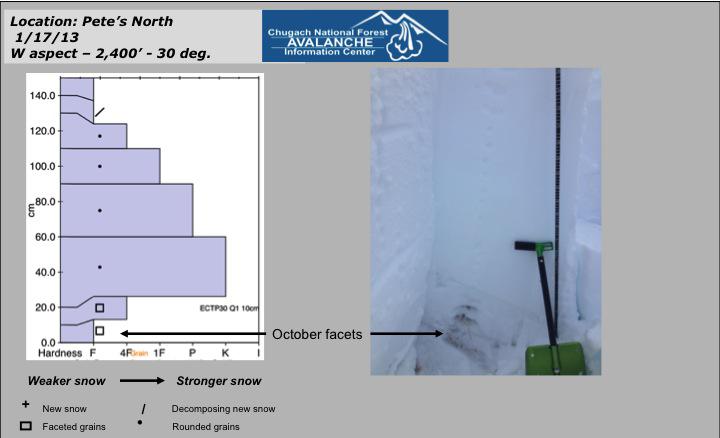