We went up Pete’s North to 2000′ to check out storm totals and hunt for buried surface hoar, which we found to be quite reactive.

We triggered two soft slab avalanches that failed on the 3/16th buried surface hoar with crown depths from 30-40cm. One failed just as we were about to start digging a pit, and another while we were descending. They both broke at our feet. We estimated the first one to be 75-100' wide and the second to be around 60'. For both avalanches, we were able walk/ski above the crown and easily get additional, substantially sized chunks to slide.
They were both on a west aspect at 2000'. We measured the slope angle at the trigger point of the first to be between 37* & 38*. They both were on relatively small terrain features so they only ran a short distance before stopping on lower angle terrain.

We triggered two avalanches. The only red flag we observed was subtle cracking a few steps before triggering the first avalanche. The snowpack at the site of the avalanches seemed quite touchy; we were able to walk/ski above the crowns and get significant portions of the slope to slide.

Stormy weather. Skies ranged were mostly obscured or overcast. There was a short window of thin cloud cover with decent visibility.
Temps at the trailhead were 33*F, with moist snow on the surface up to 1200'. Wind gusts from the north were strong enough to blow snow around at the surface and knock snow off the trees.
Snowing on and off through out the day, up to S1.

The 3/16 layer of buried surface hoar proved to be reactive to human triggers with our avalanches. It seems to be a touchy layer of concern.
We dug a pit at the site of our first avalanche (West aspect, 2000').
We found 3 layers of buried surface hoar from this month within the upper snowpack. All three layers failed in our compression tests but only the 3/16 BSH had propagating results when we performed an ECT. Depth of the layers of surface hoar and their test results below:
3/22 BSH: 20cm below the surface, 1-2mm. CT9, ECTN7.
3/16 BSH: 35cm below the surface, 3-6mm. CT11 SP, ECTP13, & ECTP15. This is the layer our avalanches failed on and seems to be the most problematic, especially with more snow forecasted.
3/2 BSH: 48cm down, 1-3mm, rounding. CT13, ECTN20. 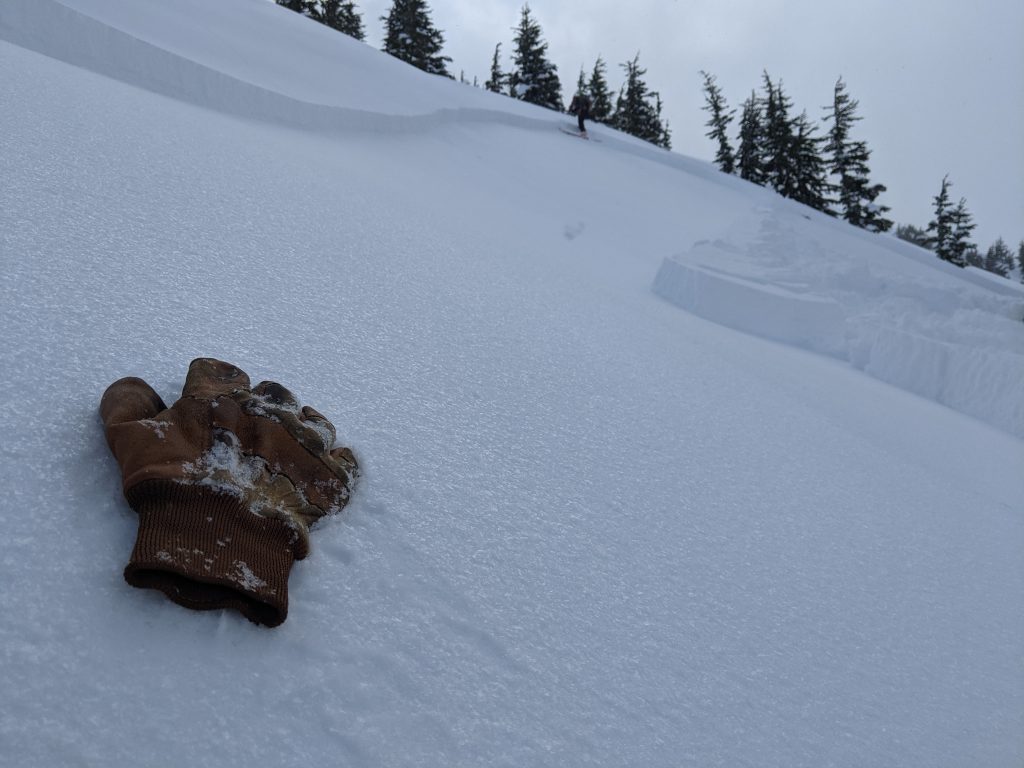 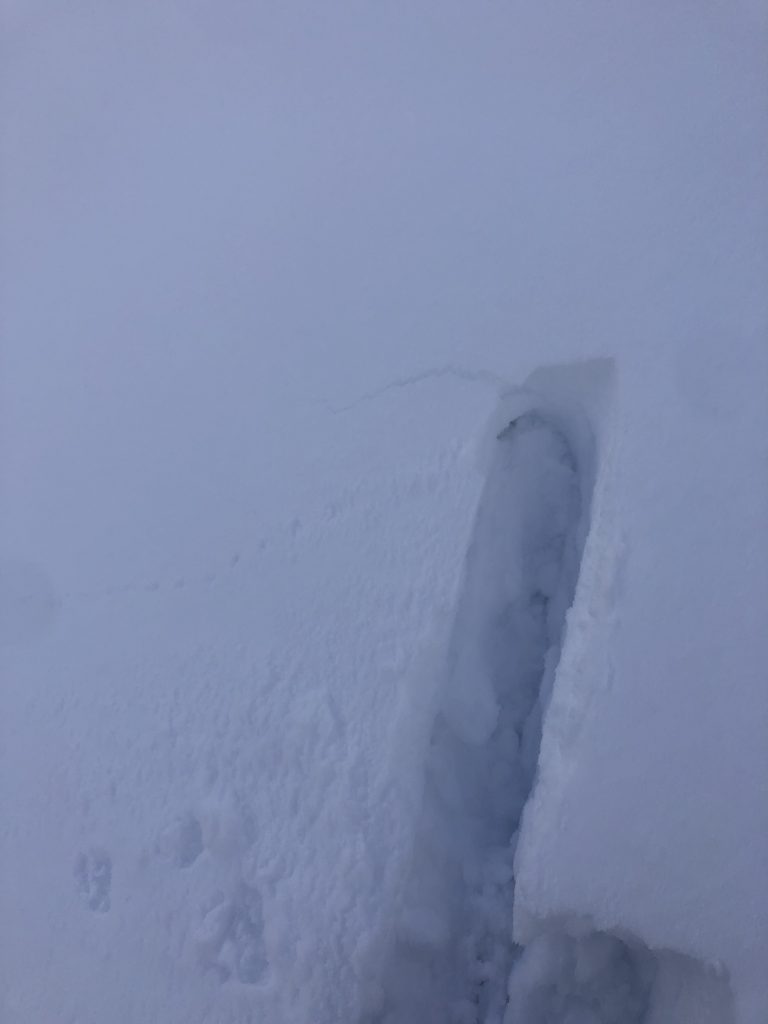 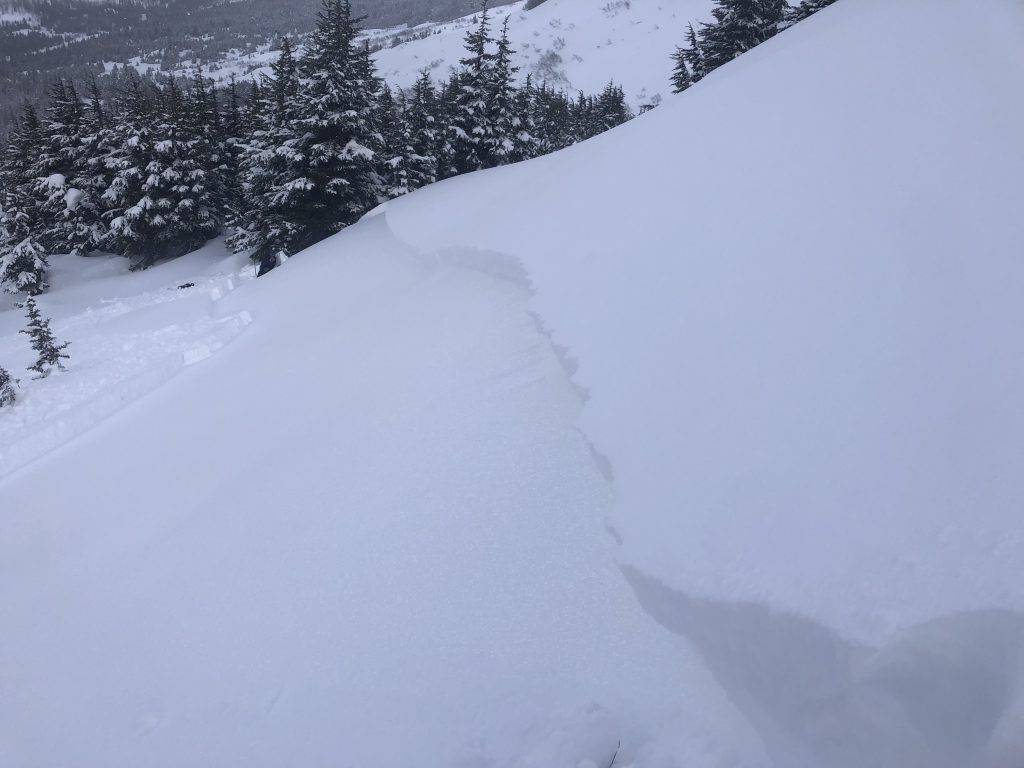 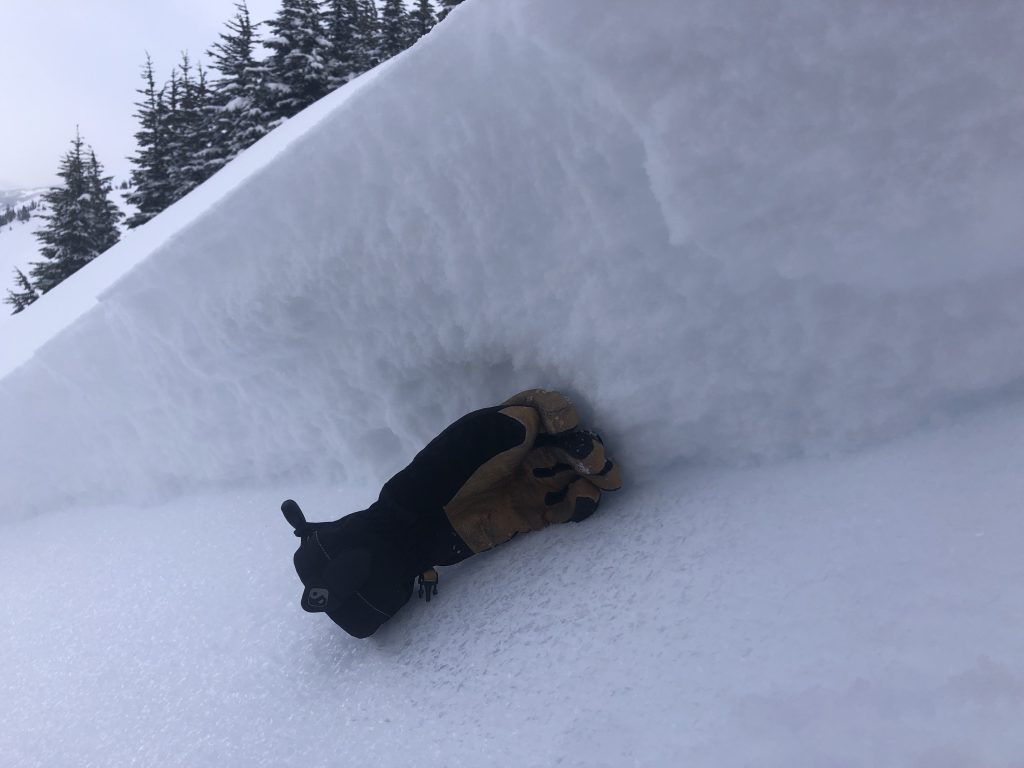 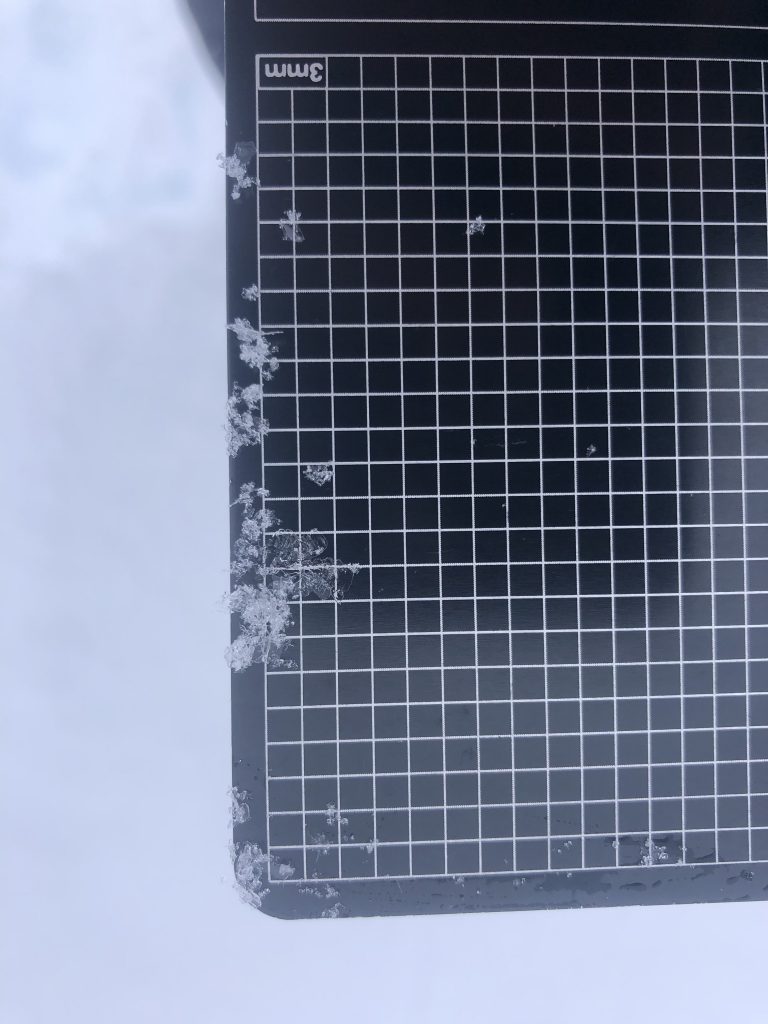 Some surface hoar grains from the bed surface. 3mm grid. 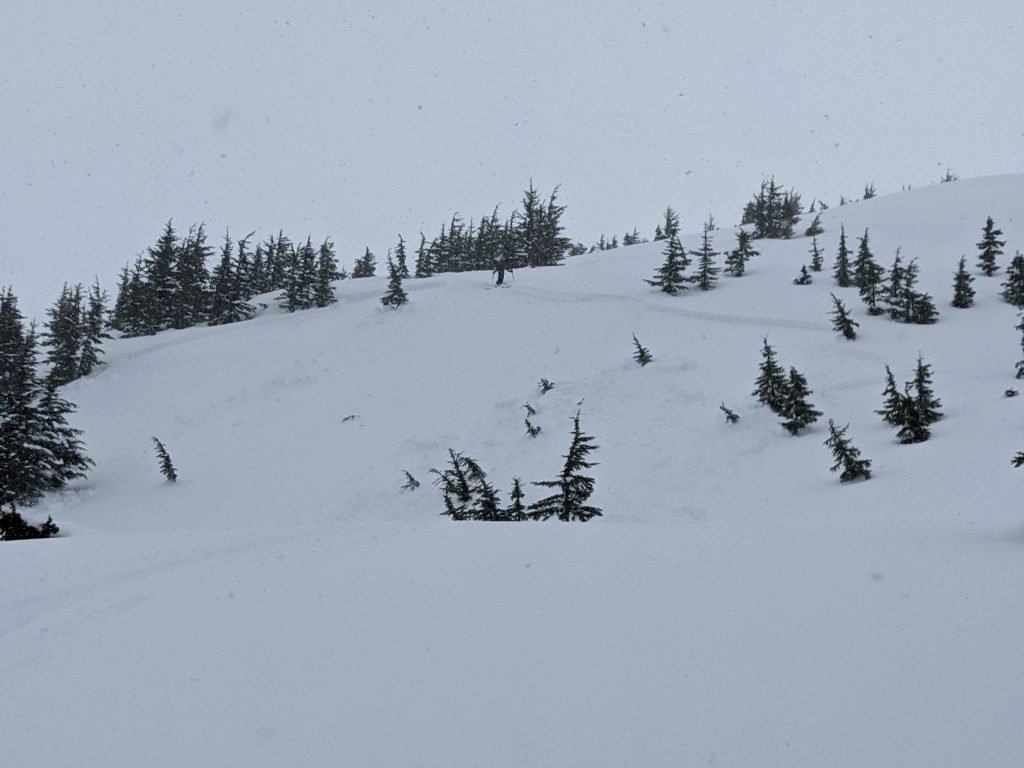 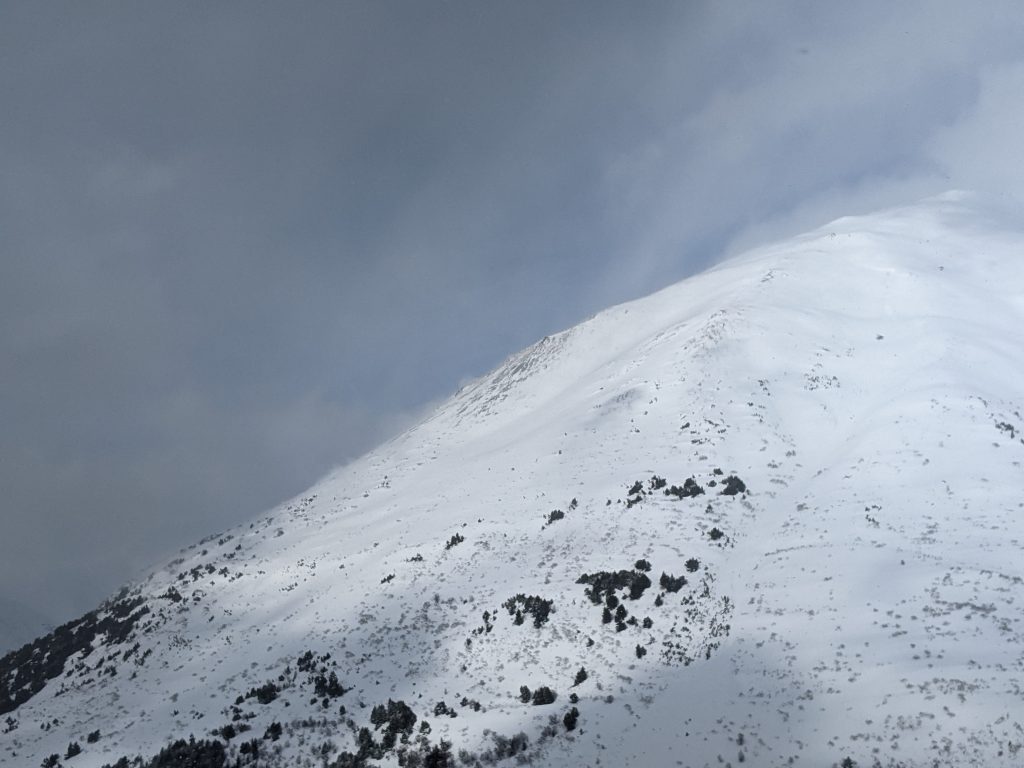 Wind transport off the southern end of Seattle Ridge. 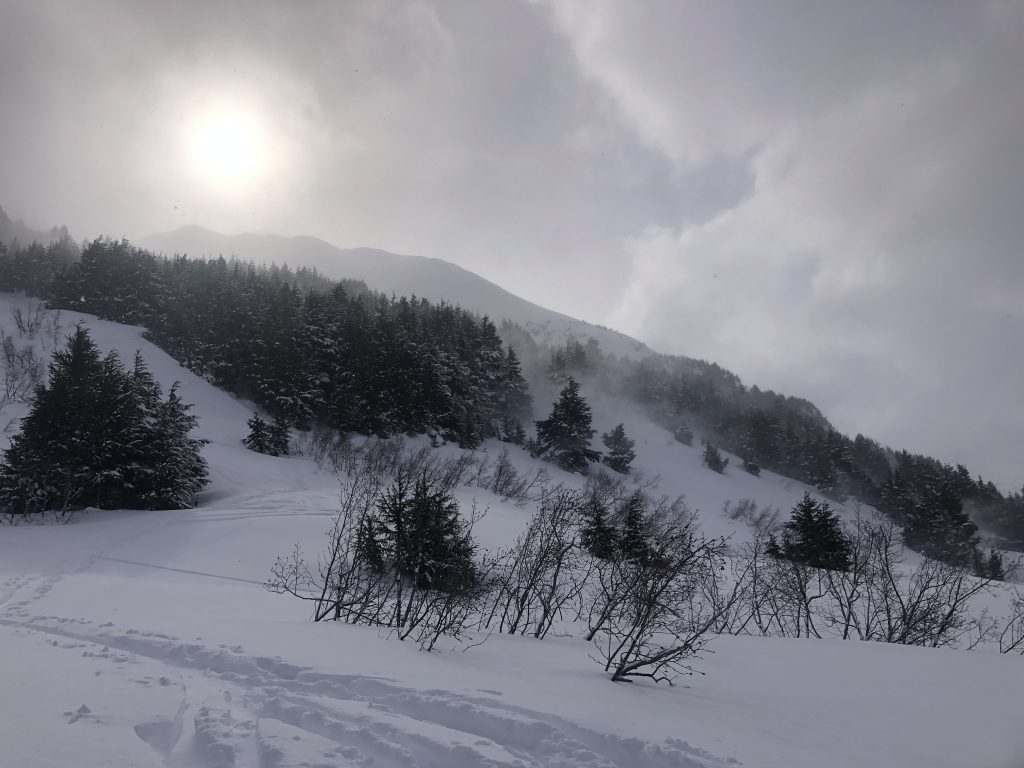 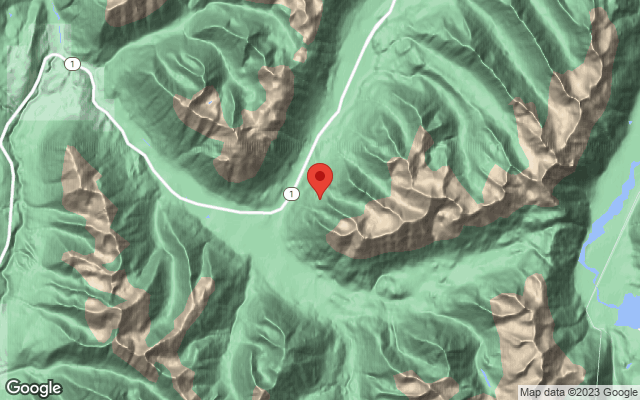