Sunburst parking lot to lowest part of sunburst ridge along the skin track. The snow was hard, punchy, sun affected…no fun for skiing. it was getting windier by the minute, but the sun was still out. Instead of heading back early we decided to keep our skins on and ski back off the sunburst ridge towards the skin track to taylor pass. Some other people seemingly experienced the same conditions (i didnt actually speak to anyone) and were headed for north magnum, hoping to find better snow.

Normally the skin track to taylor pass stays to the north (lookers left side) of the main drainage between sunburst and magnum. There were a group of 3 (skiers i think) ahead of us headed to taylor pass. i think they wanted to get a feel for snow on the north aspects, and as a result most of the skin track to taylor pass yesterday went to the south of the main drainage, right under the steeper shots on the north side of magnum. i too was curious how good the north facing snow was and eventually made my way to their skin track. soon after getting a feel for the snow my partner stated she didn’t like walking under the magnum wall and wanted to head back to a more normal route up to taylor pass. she mentioned the avalanche on the basketball court 2 weeks earlier. we crossed to the other side of the drainage and made it up to taylor pass just in time to see the first group ski down. after skiing the steeper part of taylor pass the first group headed back towards the parking lot following the skin track they had put in. the last time we saw these three they were together and beyond the avalanche path (which we didnt know existed at the time).

we skiied down within 5 minutes of the first group but stayed on the north side of the drainage the entire way back towards the parking lot. the avalanche debris was first visible to us from the bottom of our taylor pass run, in the typical spot where people wait and watch and meet up after skiing off taylor pass. the exact location is hard to describe, but it was between the basketball court and some of the more skiable north chutes nearer the west end of the north magnum ridge. the specific spot where the avalache occurred doesnt usually hold much snow, and is usually rocky. i often notice a giant vertical wind feature in that area, and this avalanche occured just to the lookers left of that. slightly more than half way from the beginning of the magnum ridge (in the west) to taylor pass is another way to describe it.

the wind had been blowing from the east quite strongly during our hike to taylor pass. there was a significant amount of snow being transported to all leeward areas. it seemed to my partner and i that this avalanche was a result of rapid snow loading. the debris came down across the skin track, and we immediately wondered if the avalanche occurred before or after the group in front of us skiied out. we could see the skin track on either side of the debris, but could not tell if the group in front of us skiied over the debris on the way out or if they had skiied first and then the avalanche covered their out tracks.

could have been natural trigger, or remote trigger by the other party. according to google earth-crown at 2900 feet, debris stops at 2500 feet. 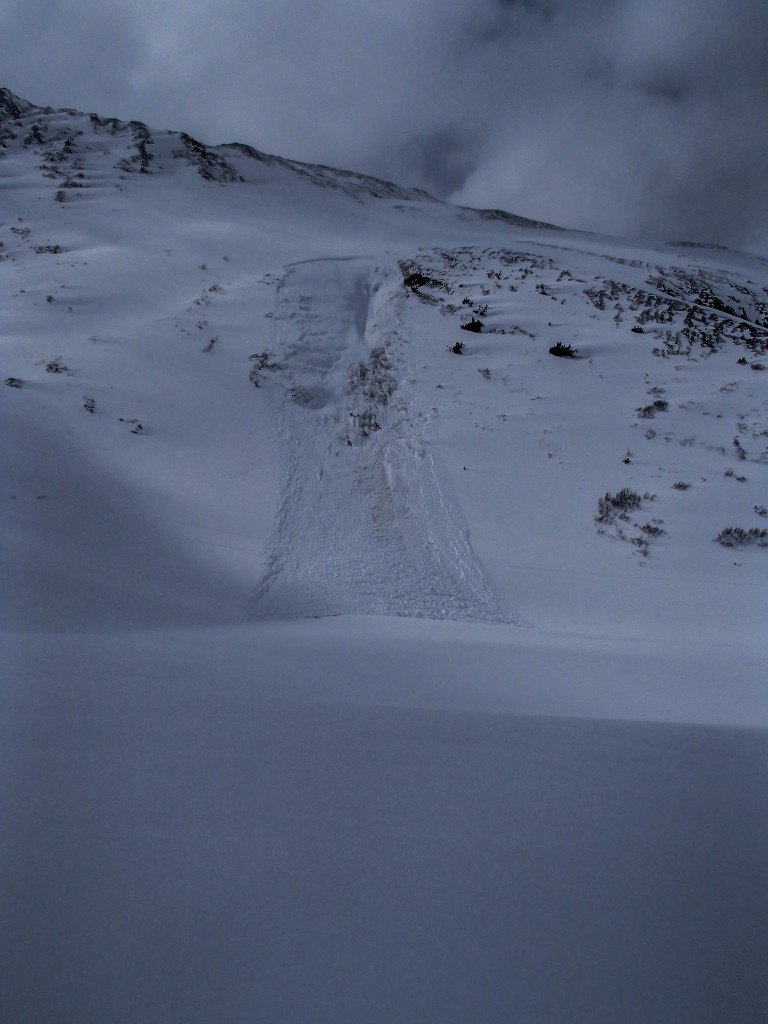 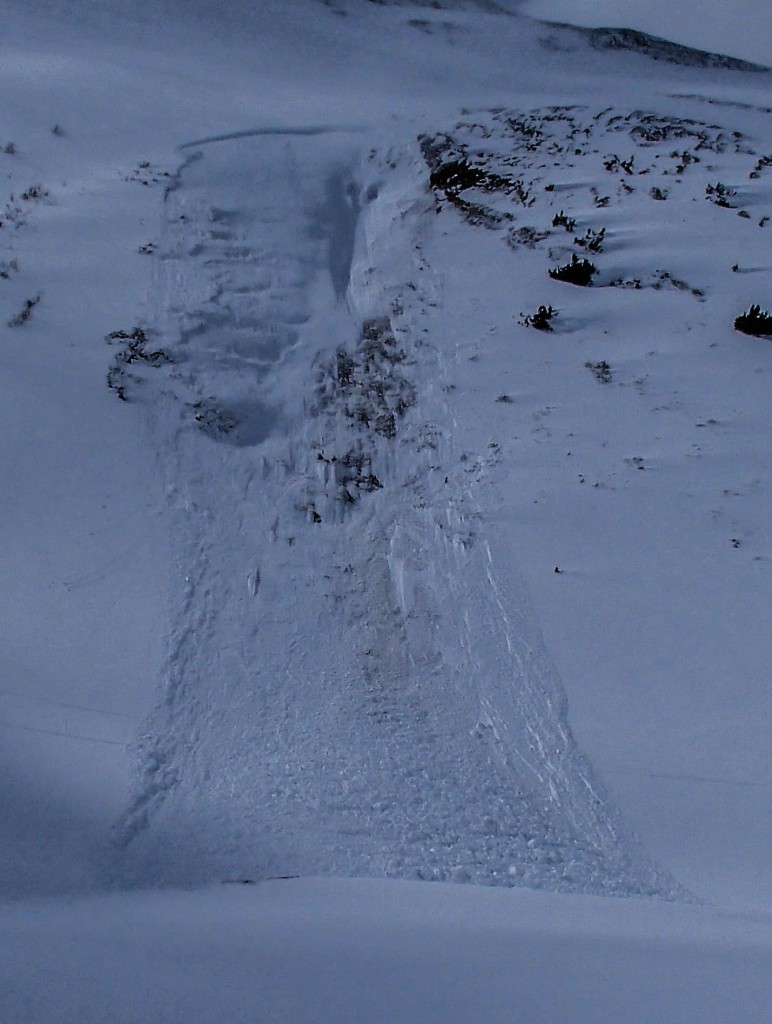 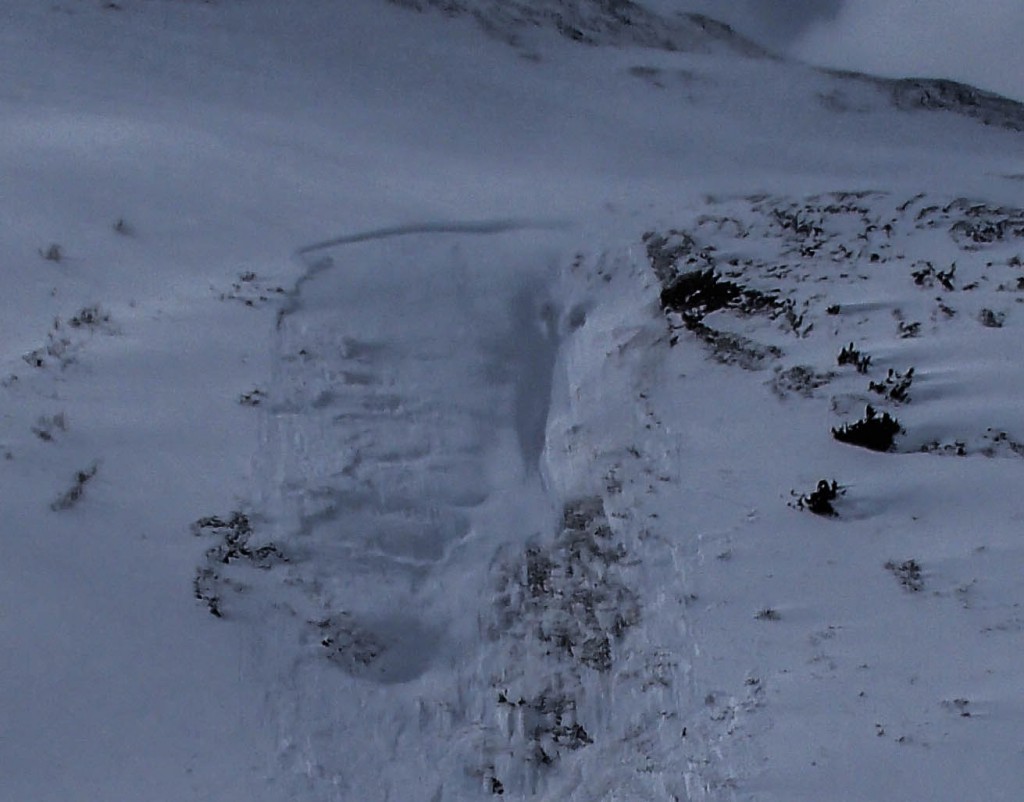 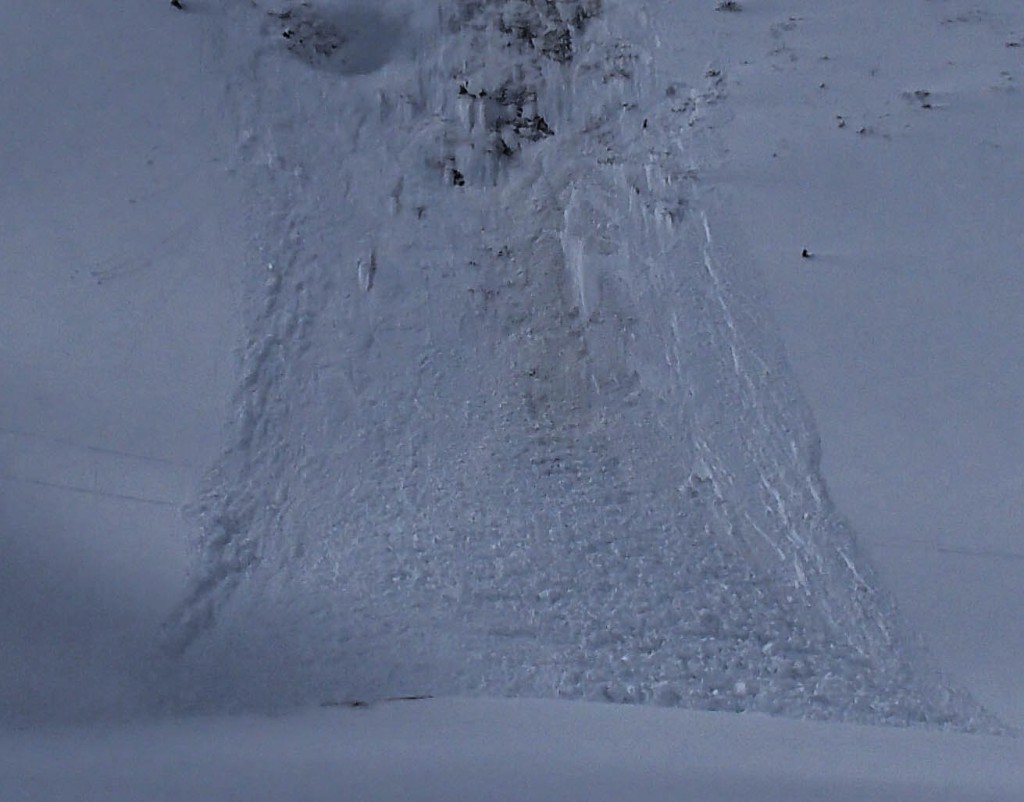 zoomed in runout zone-note skin tracks on either side 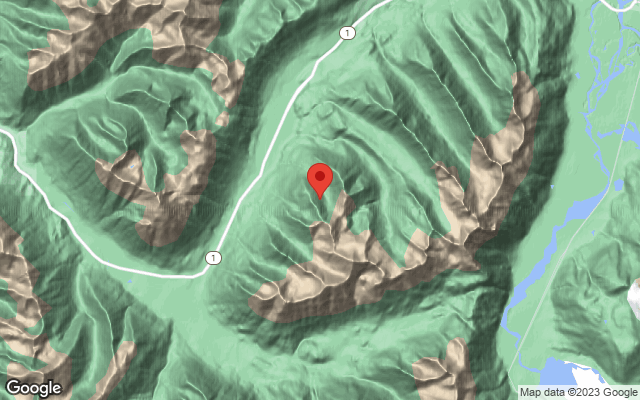