Arthur and I attempted the North couloir of West Twin Peak in Chugach State Park. The route is the gully that arcs up the left side of the face and goes almost all the way to the summit. We started from the road at 6am and reached the base of the snow field leading up to the gully at noon. We triggered an avalanche shortly after starting up the steeper portion of the route.

The avalanche was a 2.5-size slide that went 900 feet vertical and stopped on the flat valley floor. Crown varied from 18 inches to about 30 inches, and I'd estimate the start zone angle at just over 38 degrees. On the approach we were getting plenty of whoomphing on both south exposure slopes at around 3,000 feet as well as north exposure. The entire slope was cross-loaded from the snow event of the previous Monday evening through Tuesday (we were there Thursday). North face accumulation was far greater than other aspects. There were also many natural releases in the previous day or so on similar slope orientations and elevations. Boot penetration at around 3,500 feet on the north face was consistently about 20 inches for my 195-pound body with size 10.5 boots. When we made the call to head down due to the expected worsening of snow and stability, boot penetration for me was going through a firmish layer at 20 or so inches and going deeper than 36. We were still somewhat protected by terrain (being on a slight ridge formation) given that all of the natural releases were very specifically small pockets slightly west-facing from due north. Above that point we were going to lose this terrain protection and it was obvious to both of us that things were highly unstable.

The method of release was quite interesting to me. I started plunge-stepping down and got about half way to the cirque valley floor when I got a big whoomph under foot. I could hear and feel this disturbance travel all the way down to the bottom of the cirque. Then the disturbance or subsidence stepped down into another deeper layer (facets pretty much at ground level) and I could feel and hear the disturbance travel back up the slope under where I was descending. My first thought was, there it goes. As I turned around the crown fractured and released the avy while I was watching about 500 feet vertical above me. In the photos that you were sent already, you can see the leftward bend of the avalanche path (climber's left, skier's right) being deflected by the slight ridge we were on. It is not very common that you can remain quite safe yet watch a good sized avalanche rip by about 200 feet away! When the slide released, I had to shout up to my partner to look, as he told me it was quiet and he heard nothing when it released. I didn't want him to miss the show(!), but he responded exactly like I would have by being justifiably startled and running to the opposite direction--I was just hoping he didn't run far enough to drop into the slight depression to the other side of the ridge and trigger yet another slide that he would then be in! 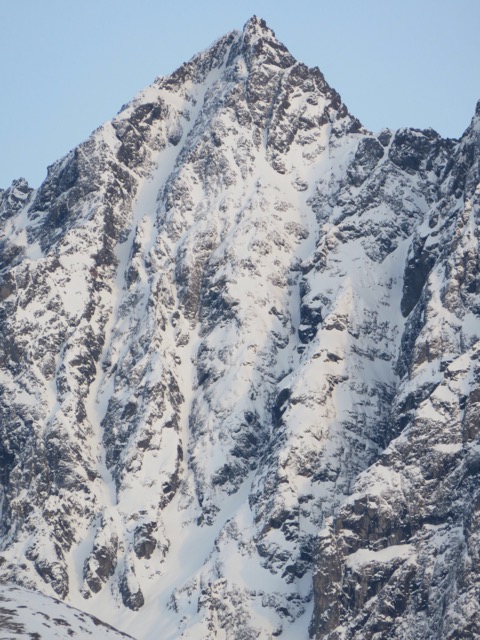 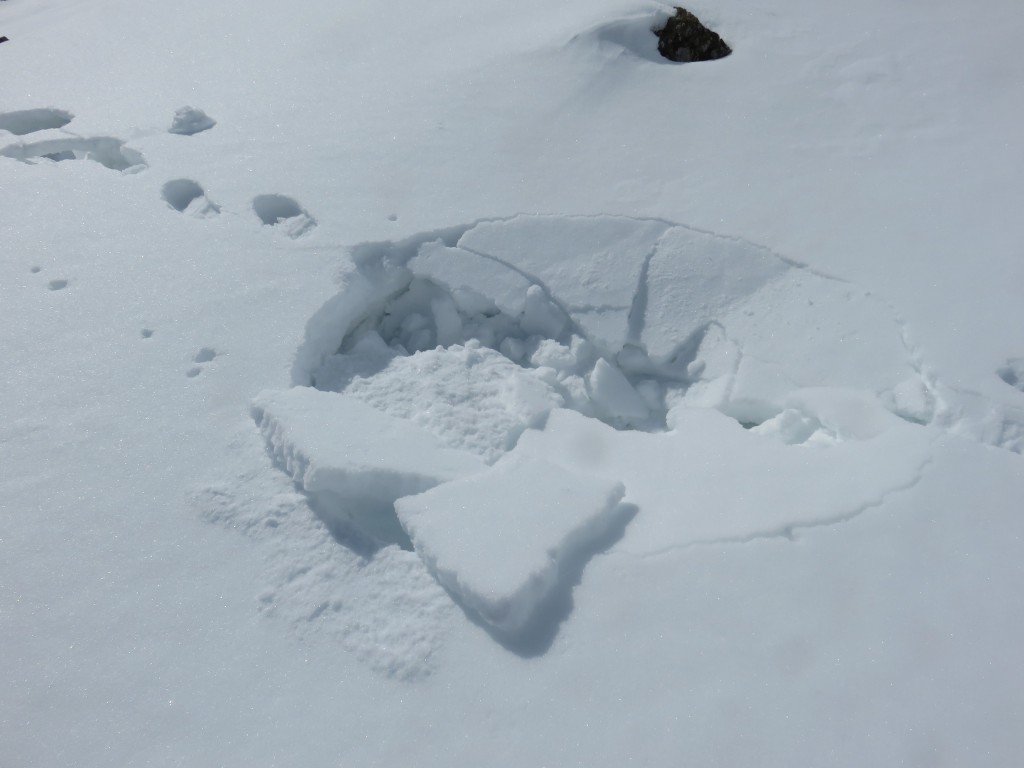 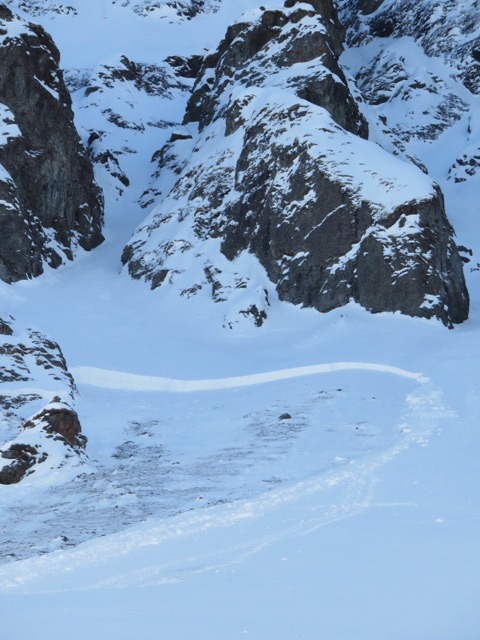 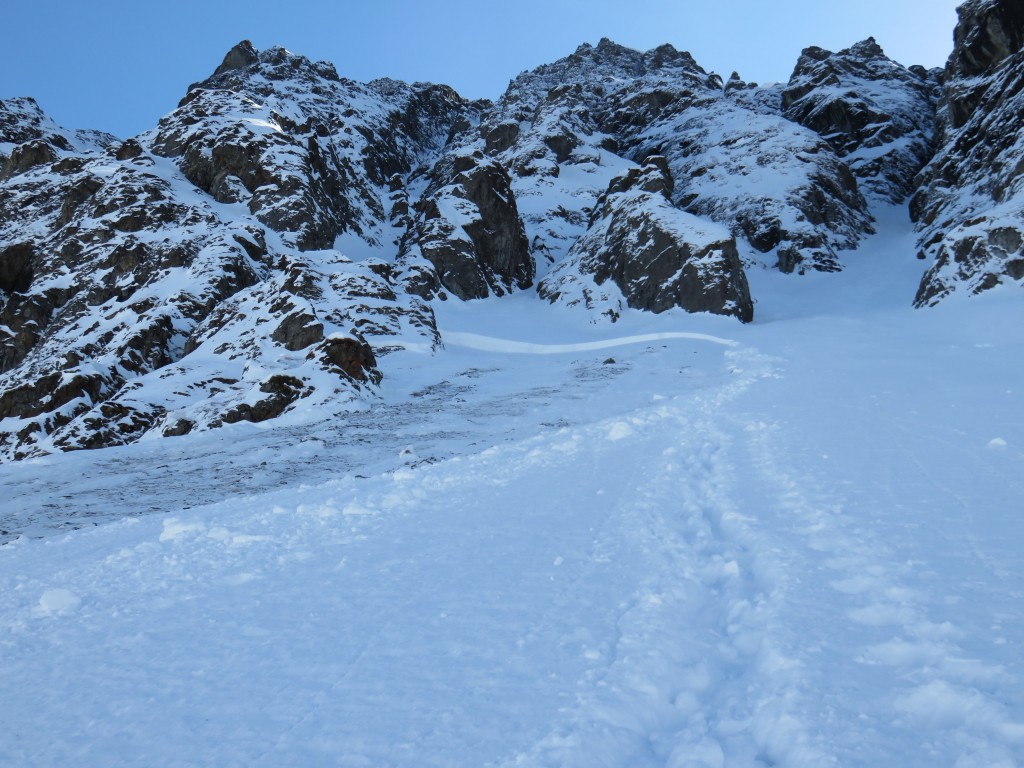 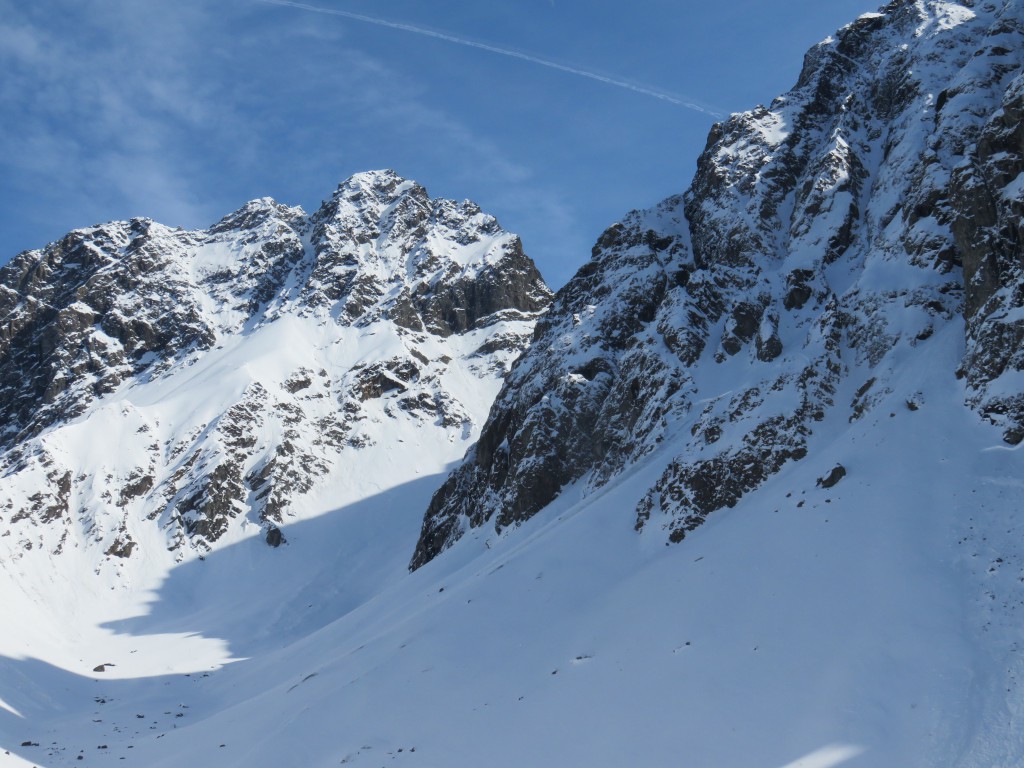 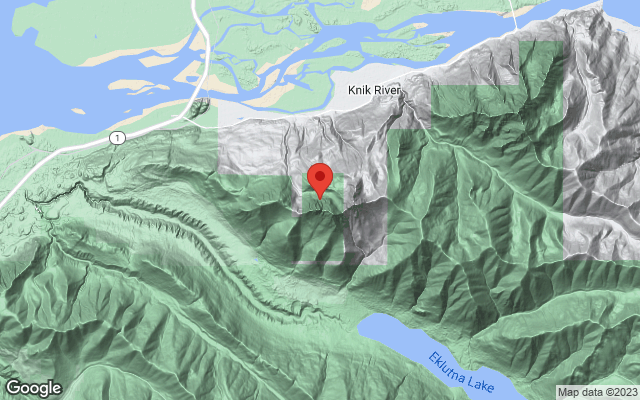