we were skiing a face w/ se-s-sw aspects and decided to ski down the skiers
right edge that was s-se facing.I was the first to drop in and about 500 ft down
from the ridge there was an old glide avalanche that had not been seen from the
top. It was opposite facing from some of the other glide avalanches on that
slope from the previous weeks. I skied up on a safe ridge around it, then
continued staying on the ridge and kicked of some small hangfire. then I got to
a lower angle safe zone and was waiting for G (or skier 2) to make his run down
to me when i heard third skier from the top yell slide!!! Then I saw a mass of
snow coming down the mountain less than 70 ft from where I was standing! Too
close for comfort. luckily i was in a pretty safe spot and got to witness the
roar of the debris crashing through the alders! it sounded like a freight train.
The slide had gone (remotely) and skier 2 was in a safe spot when it broke,

Forecaster note –
This is the same event as the two previous posts, from a slightly different perspective. It is unknown if the avalanche was triggered by the skiers or if it was coincidental to them being there. Research shows that glide avalanches are difficult to trigger by skiers, explosives, or other artificial means. They tend to release on their own schedule. 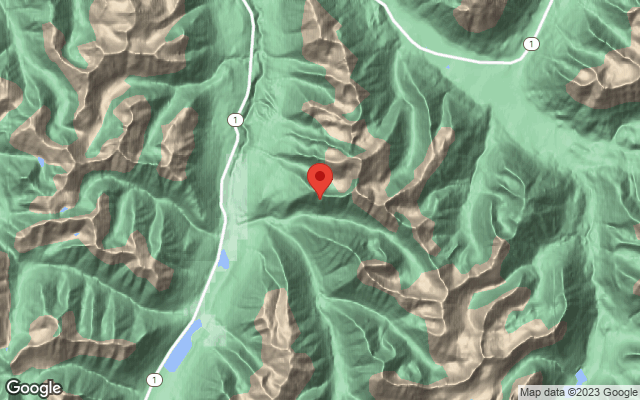