Started on the normal approach to Magnum and PMS Bowl (N along highway and into forest at first creek) from the parking lot after Sunburst. There was quite a bit of alder in the way, so we followed some tracks into the forest. Eventually we made it to PMS bowl then traversed over to Cornbiscuit and back down into the alder maze. I would not necessarily recomend this route with our current snowpack.

Temps in the parking lot were quite cold, -15 according to the truck. Up at the ridgetop temps were closer to 10. No precipitation. Winds were calm to light out of the east.

At the road level there was enough snow to skin on, but not enough to lay down the alders. In the forest there were just a few inches of snow. From about 1200' to 2800' there was a layer of surface hoar standing up on the snow surface, but near the ridgelines at higher elevations the surface hoar had been knocked down by recent winds. At these higher elevations we saw wind texture on the snow surface but the areas we travelled still had low density snow despite the winds.

The total snow depth at 2400' was 125cm with weak snow at the surface over top of a very strong base layer from the halloween storm. We could not locate the buried surface hoar that was buried by the veterans day storm at this elevation. Our stability tests showed a potential weak layer of facets above the halloween crust, which we have seen throughout the advisory area.

At 3100' the total snow depth was 175cm with a layer or buried surface hoar 15cm down. Our test results showed moderate strength (ECTN19) in the buried surface hoar, which indicates strengthening of this weak layer over the past ten days since it was buried. 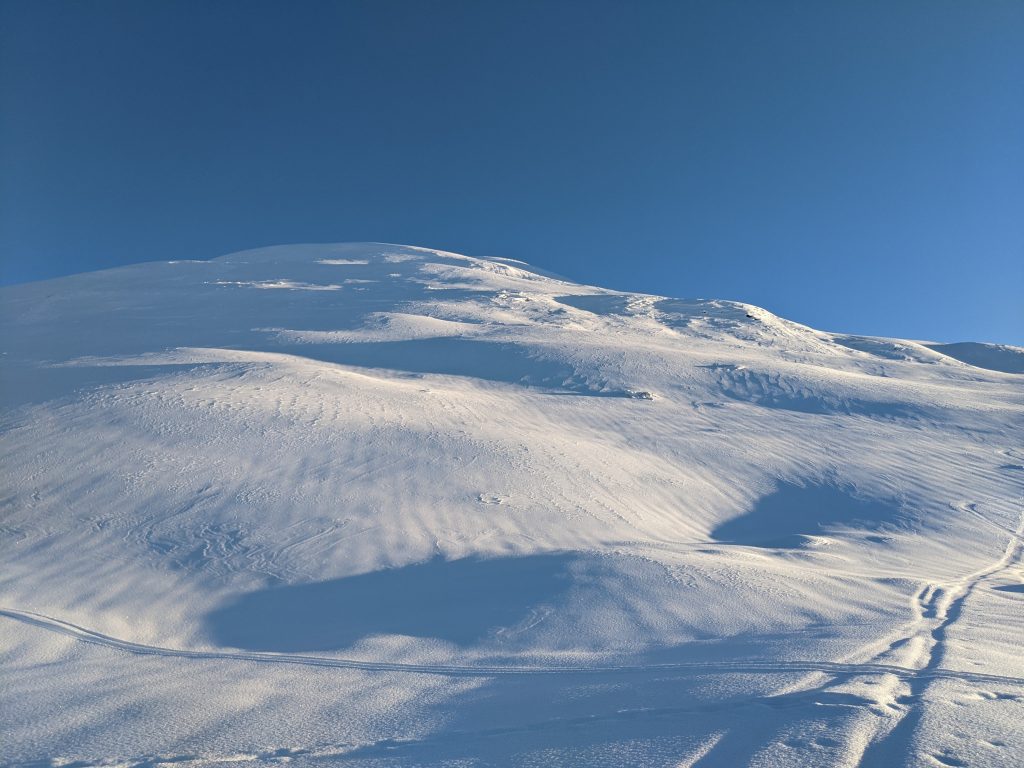 Wind texture on west aspect of Cornbiscuit. This area appeared to have a lot more wind effect than our route on the west shoulder of Magnum. 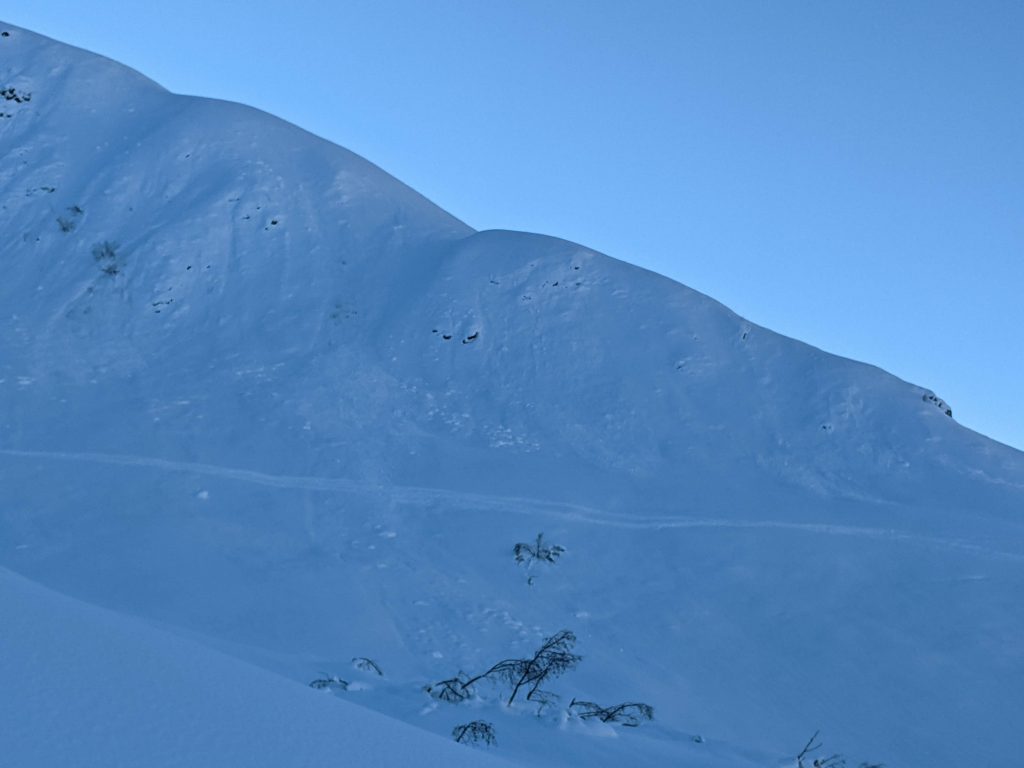 Some small wind slabs released off the north side of Cornbiscuit in the past few days. Hard to see with all the old debris, but they mostly release from cross loaded gullies. 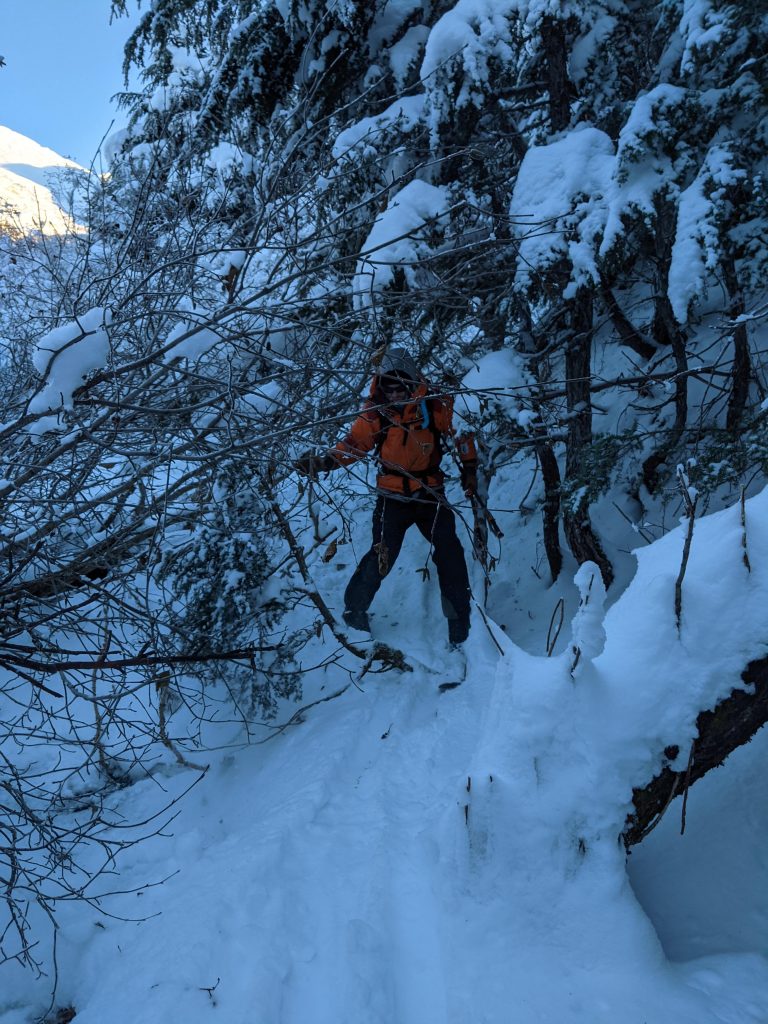 Tough conditions for the approach and exit right now. 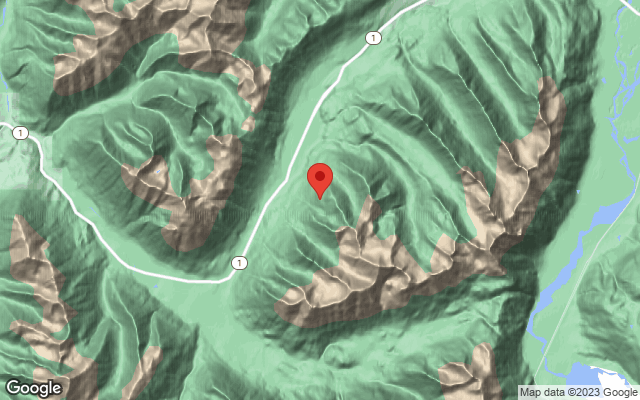