Back By Pastoral: Fresh looking cornice chunks and avalanche debris (D1.5 - 2) back along the ridgeline between where Center Ridge ends and Pastoral on a SW aspect, potentially including some short crowns but this is was far away! See picture below.

Sunburst: Natural loose avalanche activity from the day prior pictured below - running long. There were some shorter running skier triggered sluffs today on sunburst and steeper rolls of Magnum in the AM; by afternoon, the surface on W & S aspects was moist and skier triggered sluffs were just on shaded slopes.

Cornbiscuit/Superbowl: Small debris piles across most of Cornbiscuit's north aspect as represented in photo below, and some similar activity back in Superbowl.

Small portions of the cornice on Magnum's ridgeline would crack just a few feet in front of ski tips, breaking in 8-12" thick blocks, and the cornice was soft (~4 finger). A ski cut just below this cornice on a 36 degree slope produced no cracking or failure.

Few clouds, generally calm winds, and SUN.
Below freezing before noon at all elevations... rising rapidly when we left at 3 PM.

Dry snow surface at all elevations - including the road - in the AM; this changed to moist snow on S to W aspects below 2500', and moist snow to ridgelines on steeper due south slopes by 3 PM. Wet snow surface on steep, low elevation southerlies by 3 PM and in the flats by the parking lot... with a few hours of sun left to go...

Melt freeze crust was ~3" thick and very stout in clearings by the road, tapering quick with elevation to a thinner, breakable crust by 1000' with a slight dusting of snow on it. 1-3" of soft snow over a progressively thinner crust to 2000', and after that the recent snow sat on a progressively harder snow to ridgeline, with the only exception being steep due south slopes where a crust could be felt under 4-6" of fist hard snow.

Ski penetration of 3-5" above 2000', with the exception of the ridgeline which was cleared of new snow during yesterday's winds in places. The entire route only had a few spots that had received substantial winds yesterday; wind hardened snow on the surface was just present just below ridgeline and in isolated spots along the valley bottom between magnum and corn biscuit.

Hand shear tests would fail with medium pressure 8-12" down, with no surface hoar visible to the naked eye... but small surface hoar grains may have been in there. The interface for these hand shear pits was a fairly thick layer of soft snow.

See below for shallow pit structure and results about 75' below the magnum ridgeline, in a spot that has been slightly wind loaded in the past, but it lacked signs of substantial loading in the past few days. No buried surface hoar could be found in the top 12" of snowpack, including in the vicinity of a thin melt freeze crust 25cm down. There was a prominent visible layer of buried surface hoar 50cm down - suspecting the 3/2 - that propagated in an ECT at 27 taps. This layer was sitting on pencil hard rounds, and included some small rounding facets. 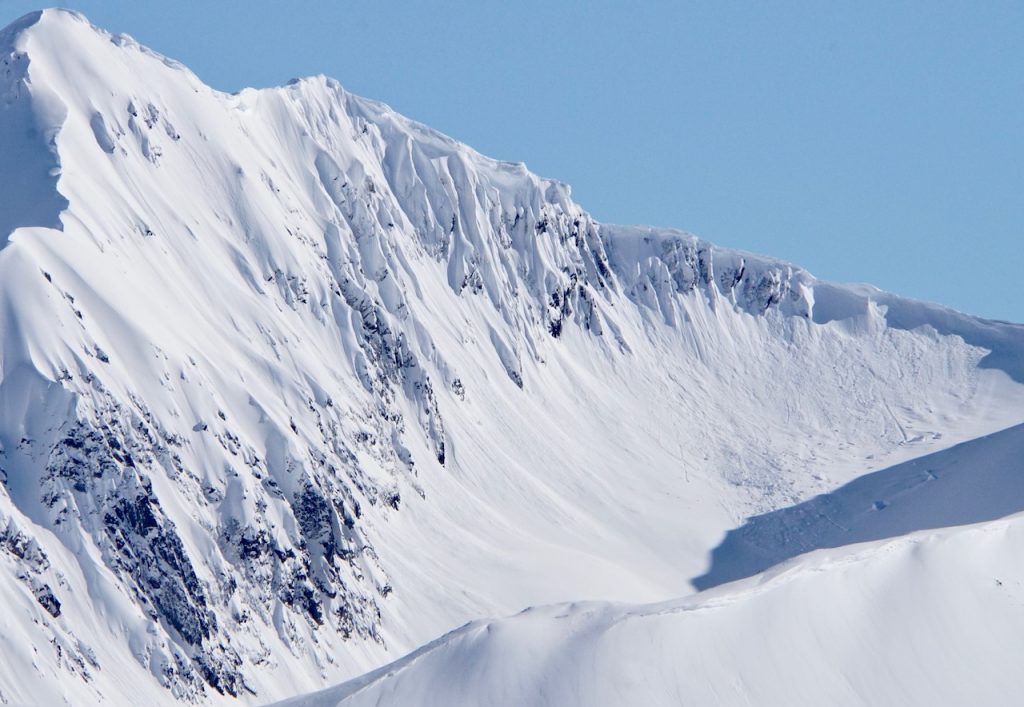 Cornice fall and debris, along with potentially a few short crowns - hard to tell so far away - back on a SW ridgeline near Pastoral. 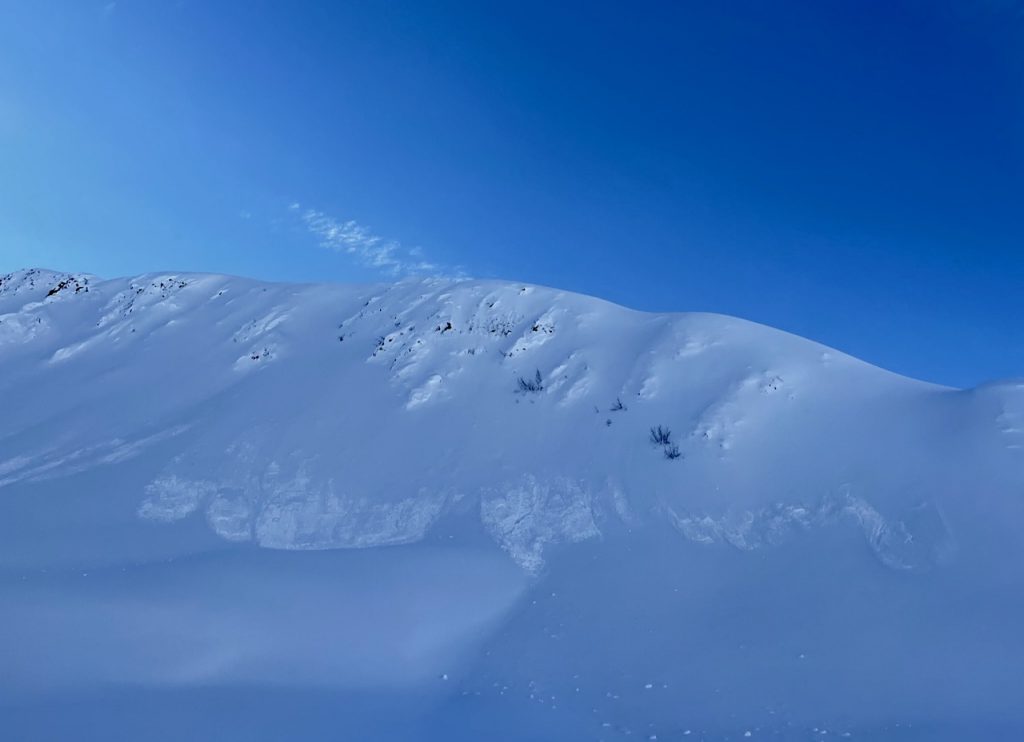 Debris from small avalanches on the N aspect of Cornbiscuit. Similar debris could be seen on shaded aspects in and by Superbowl as well. 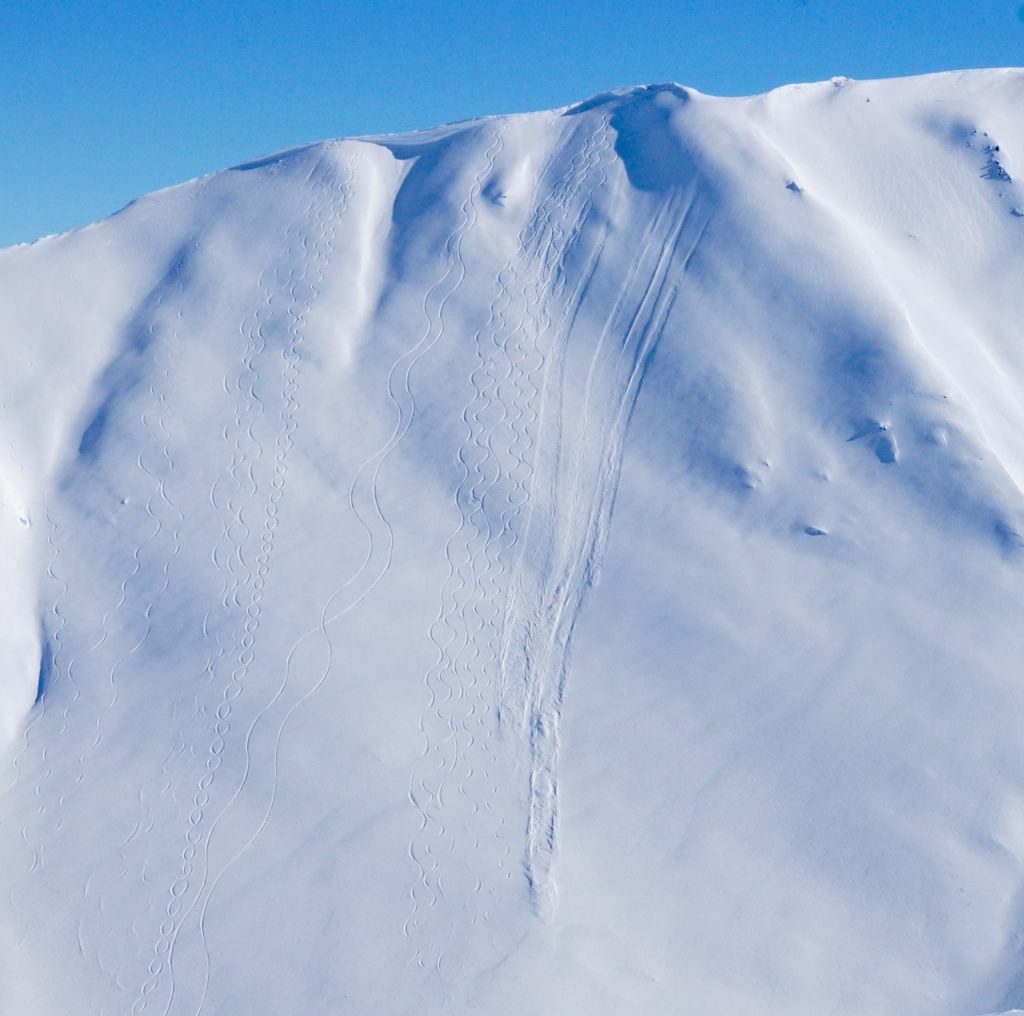 Long running loose avalanches from yesterday, that appear to be natural. Shorter dry loose sluffs today on magnum and sunburst in the AM, though by the afternoon the surface was getting hot... 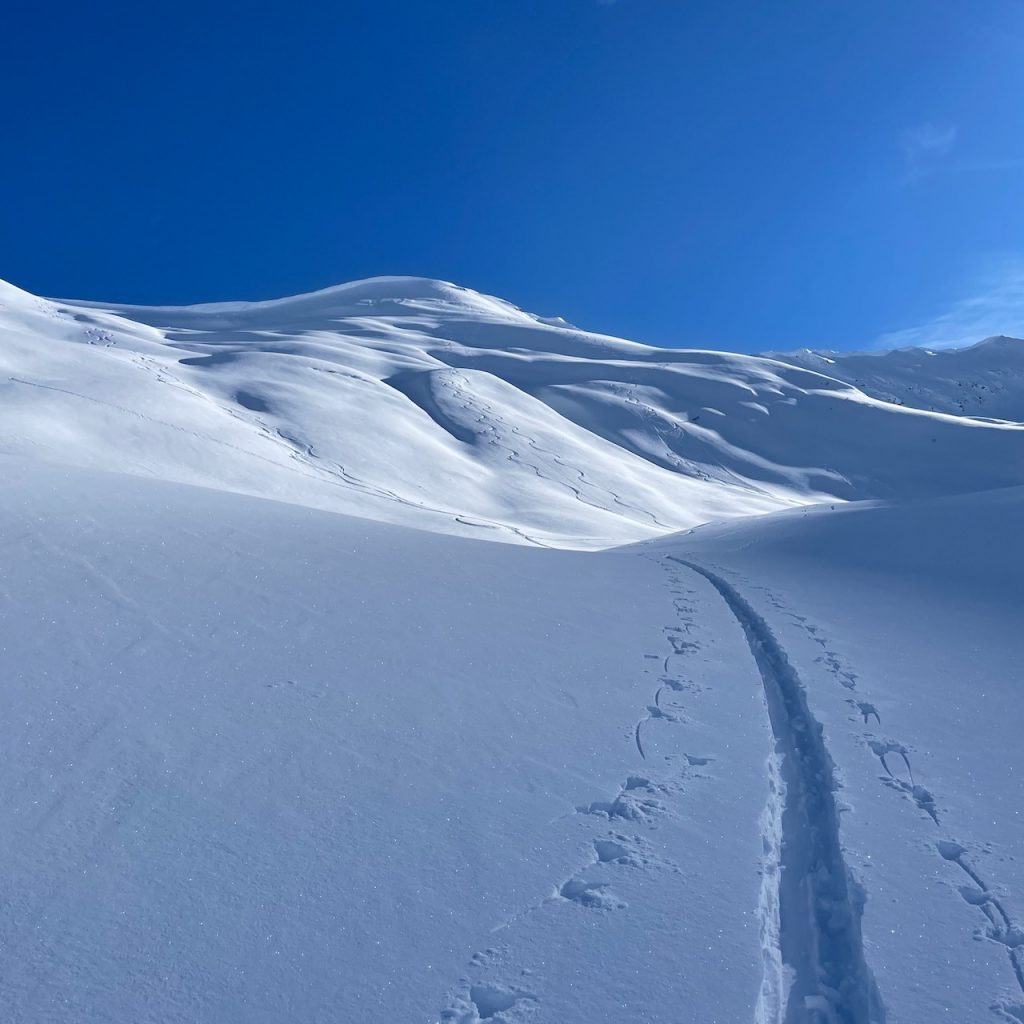 3-5" ski pen above 2000' with surprisingly little wind effect from yesterday! 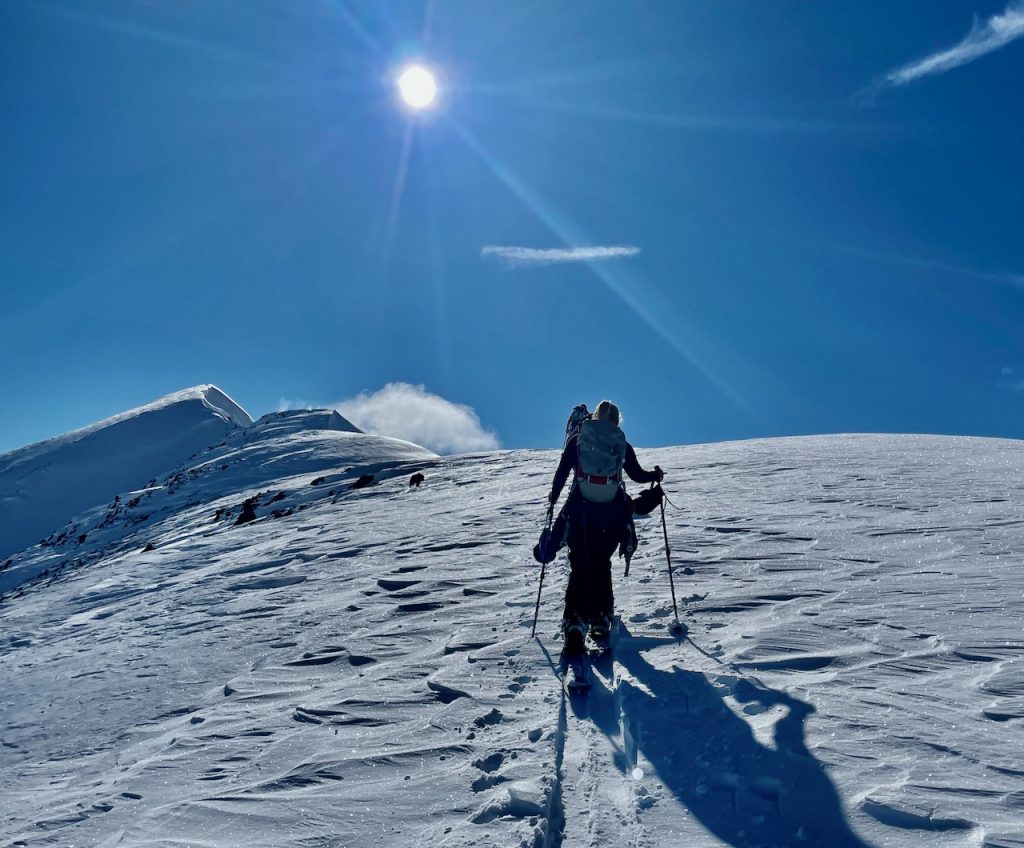 ... the ridge did get some wind, though, with the New Years Crust/rocks exposed to the left and soft recently formed cornice to the right. 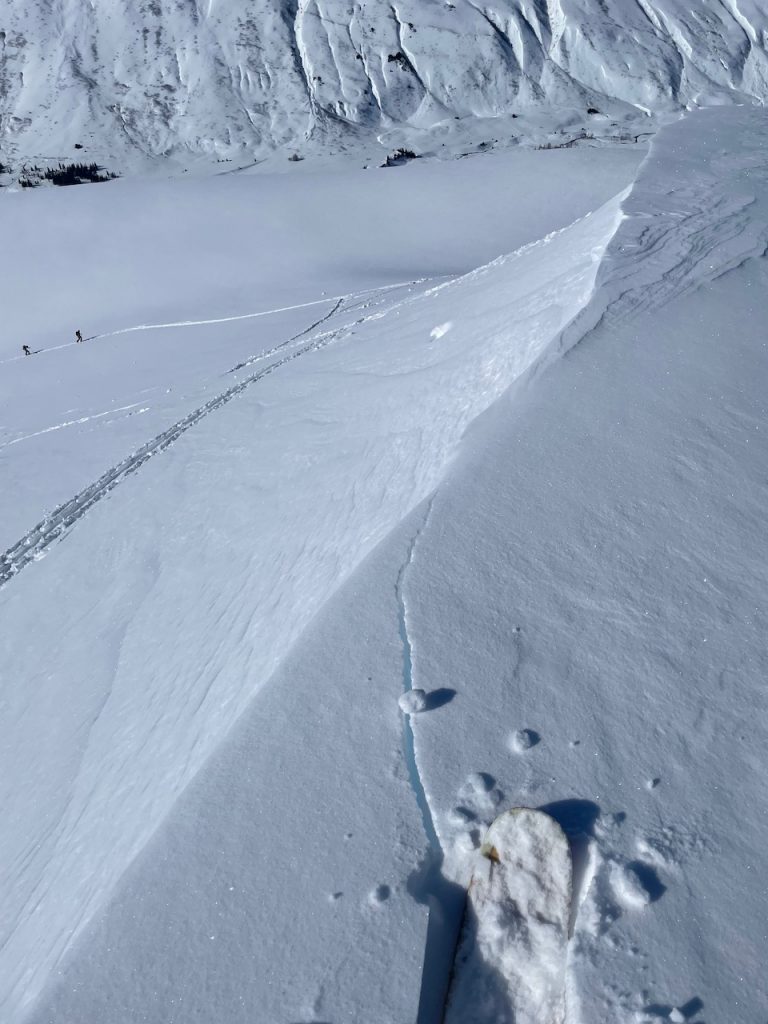 Small cracking in the recently formed cornice; ski cutting the small slope in front of the ski tip produced no results. 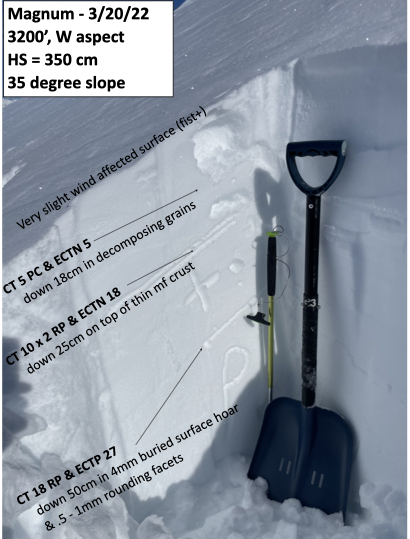 Pit results as described above. 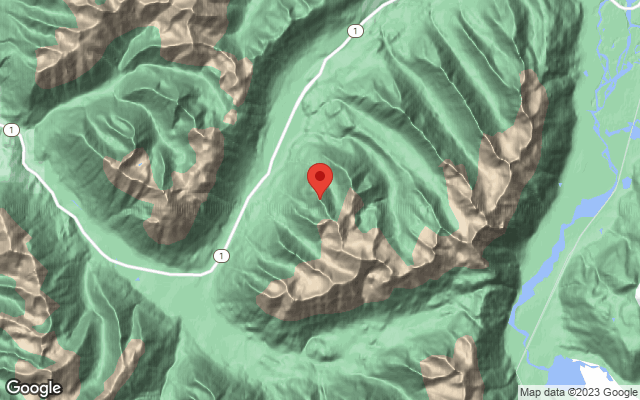