No new avalanche activity from the past 24 hours in the region, and no collapsing/cracking... including while setting the track up the usual low angle bowl. Small cornices/wind loaded features would just fail under foot... but the cornice over the low angle bowl of Magnum is quite impressive!

With better light and being closer to the N aspect dry loose avalanches on Cornbiscuit sent in yesterday's ob, the debris was fresh, naturally triggered, and likely towards the end of the 2/11 - 2/12 new snow.

Another day of all types of weather!

Despite the warm temperatures, the snow surface was basically dry at parking lot level even in the afternoon. Yesterday's warm temperatures only left a slight stiffness to the snow surface at our lowest elevation. 2-3" of snow from the 2/11 - 2/12 refresh... with some soft snow still on the surface for the entire route, including on the ridgeline. Ski penetration of 4-6" in the trees, decreasing to 1-4" above treeline.

After probing at the ridgeline - where 320+cm of snow was present - found a pit location to the north of the ridgeline by about 75'. In the vicinity of the pit, the height of snow was 80 - 120cm, with the New Years Crust just 40-50cm down from the surface. While we didn't probe the entirety of this lower angle, generally wind scoured feature, this pit was dug in a larger area of thin snowpack than we found at Pete's North or Tincan in the past two weeks. The pit featured 'summit-area-like' facets that failed in compression tests with a large noticeable drop of the block.

In addition, this pit also had a different structure surrounding the 1/25 crust than I've seen in other recent Turnagain Pass or even Summit/Girdwood pits. The crust appeared to be thicker here than elsewhere, though today it's breaking down and was quite fragile. It was surrounded by a thin (~1cm) layer of four finger hardness .5mm facets, with stout layers of wind packed particles above and below it. The crust was buried shallower here than in other pits on the pass, only 25cm down from the surface. Test results, pit structure, and facet photos below!

Overall, interesting structure with two layers of persistent grains less than a meter from the surface on a thin north aspect. 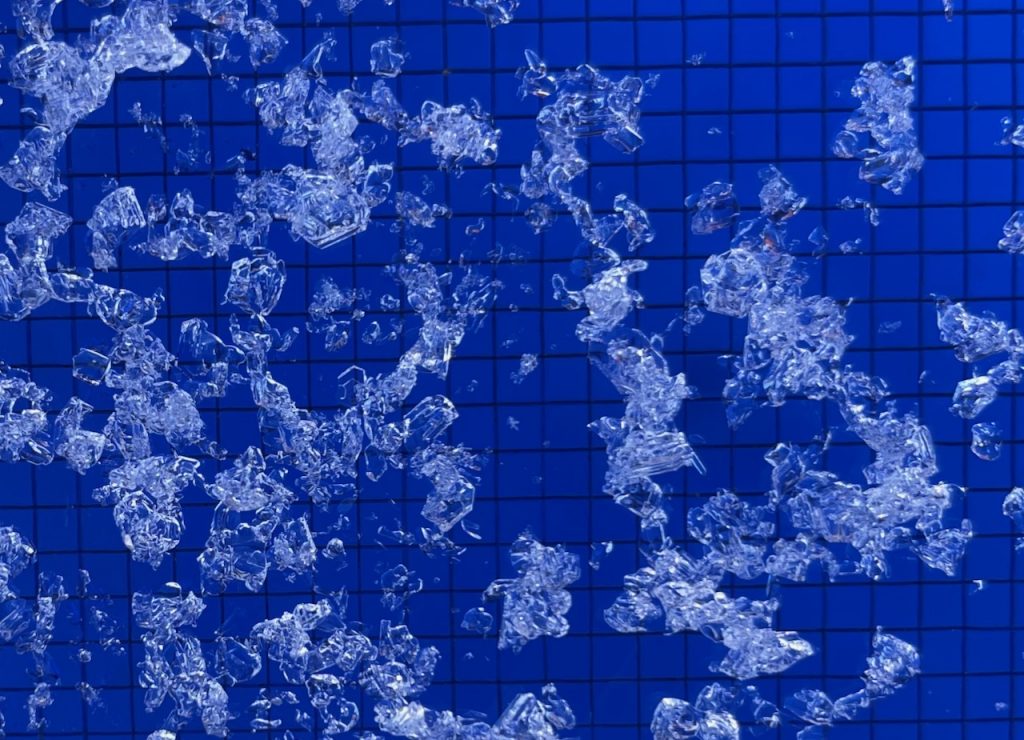 1 - 3 mm facets that failed in the pit below... these seemed like they belonged in the Summit region! 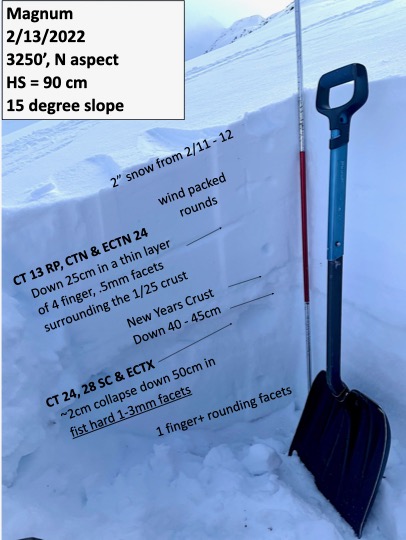 Pit structure and results discussed above. 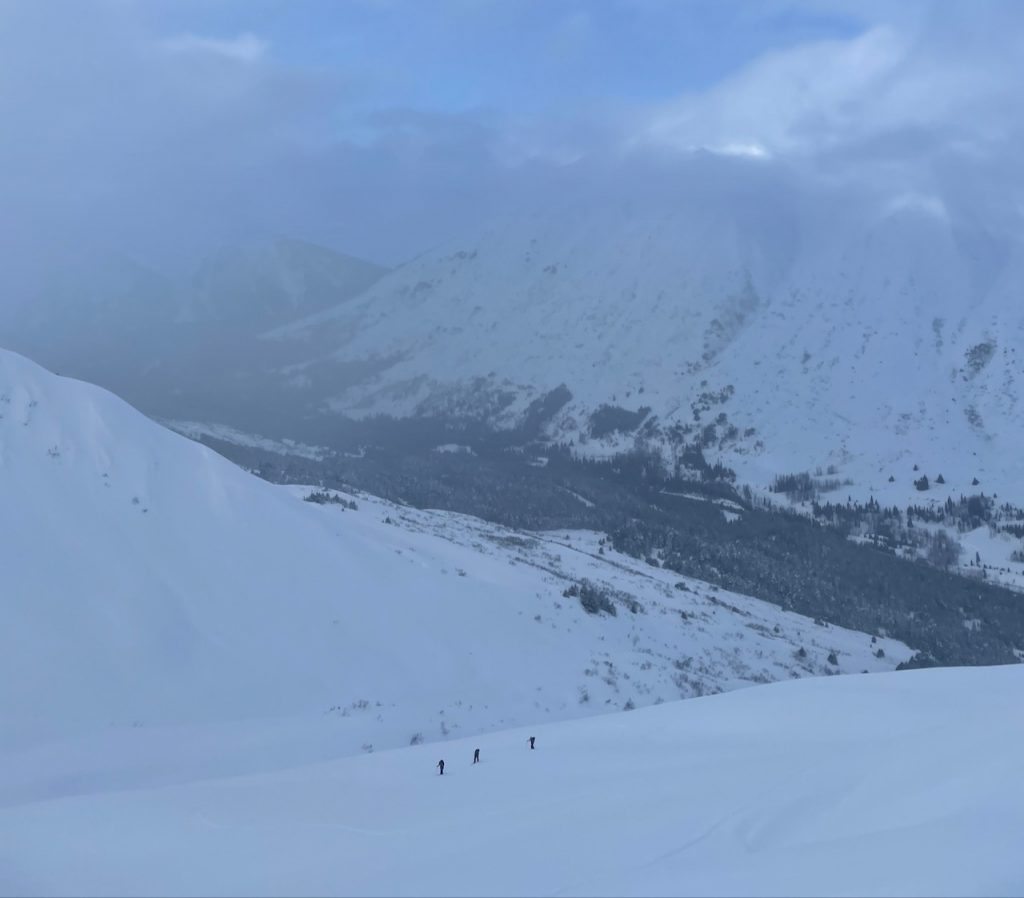 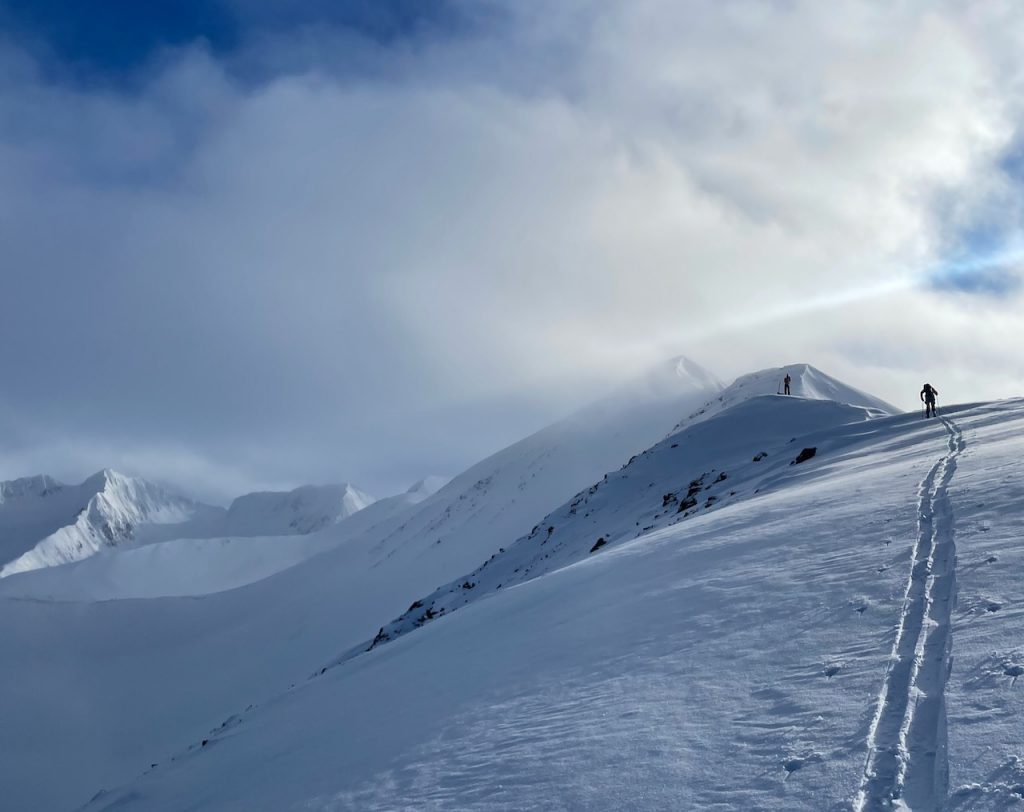 Photo of the Magnum ridge, with soft snow still present along the entire route! 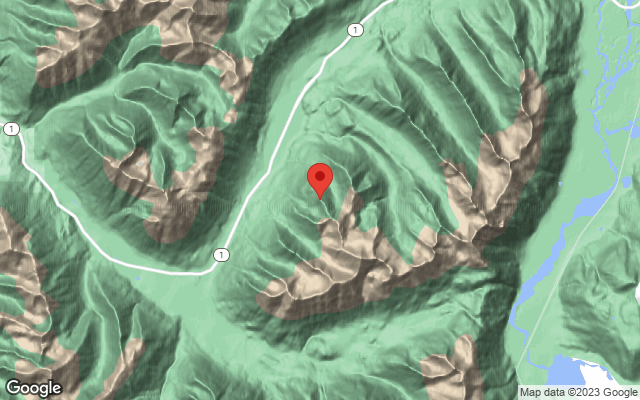