We toured up to around 3200′ on Lipps and skied a southwest aspect. We were trying to get up close to check out the crown from an avalanche reported yesterday, but we did not feel great about spending a lot of time on the steep slope with a lot of hangfire overhead. We dug on a SW aspect at 2400′ and a NW aspect at 2300′, which was very close to the toe of the debris pile from the avalanche in question.

We saw evidence of a widespread cycle since Thursday night. All of the avalanches we saw appeared to be 1-2′ deep. Some of the avalanches up the Lynx Creek drainage were several hundred feet wide. We found a layer of decomposing stellars in our snowpits that was sitting on top of the firm wind surface from 2/10. We suspect this layer was the culprit for a lot of the activity. This likely corresponds with the layer that has been reported on Seattle Ridge, as well north of Girdwood. We did not get any propagating results on the layer in our test pits.

So. Much. SUN!!! Light southeasterly winds on the ridgetop. The air temp felt cool, but the sun was having a noticeable effect on the snow surface. We were dealing with a little bit of clumping on our skins around 2:00 p.m.

6-10" soft snow from Thursday night. In some places this new snow had been drifted into slightly stiffer slabs, and on others there was about a 1" thick wind skin at the surface that barely effected ski quality.

We found similar structure in NW and SW aspects at 2300 and 2400'. The most interesting layer was a layer of decomposing stellars that was buried a little over a foot deep. This layer was not propagating in stability tests (ECTN12, ECTN18, ECTN22), but it was giving us clean shear results in CT tests (CT15 SC Q1, CT22 Q1, CT20SC Q1) and popping out of the pit with shovel shears. We suspect this was the culprit for a lot of the activity in Turnagain Pass yesterday. The layer likely corresponds with the problem layer described in the Seattle Ridge observation from today, as well as some concerning reports from north of Girdwood.

We didn't get any results stomping on steep wind-loaded test slopes, and skied some slopes in the mid- 30's with no concerning results. We did see some small skier-triggered loose avalanches over on Cornbiscuit in the afternoon. 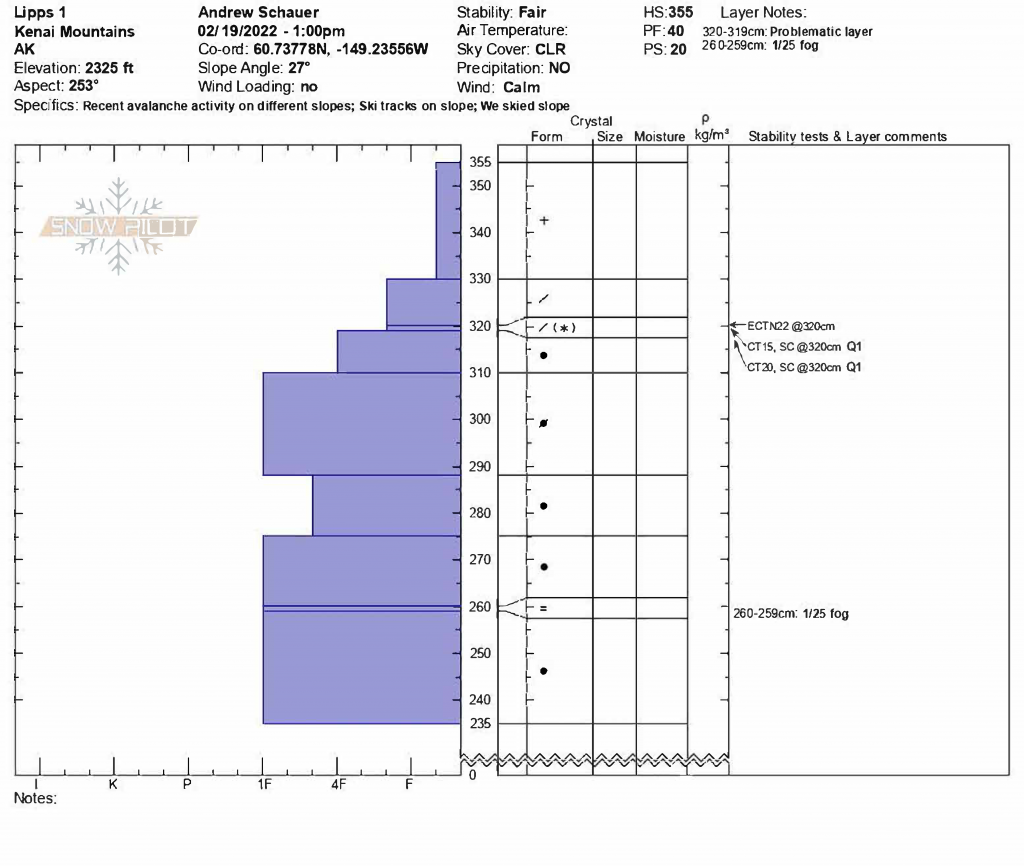 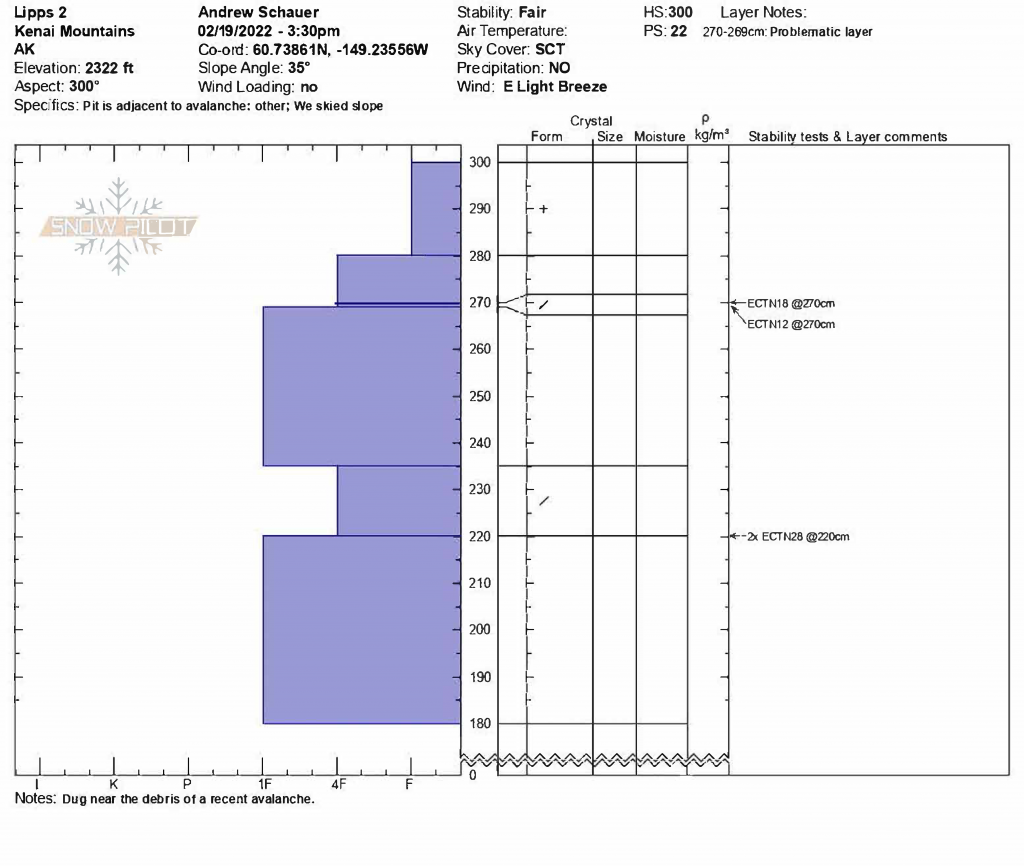 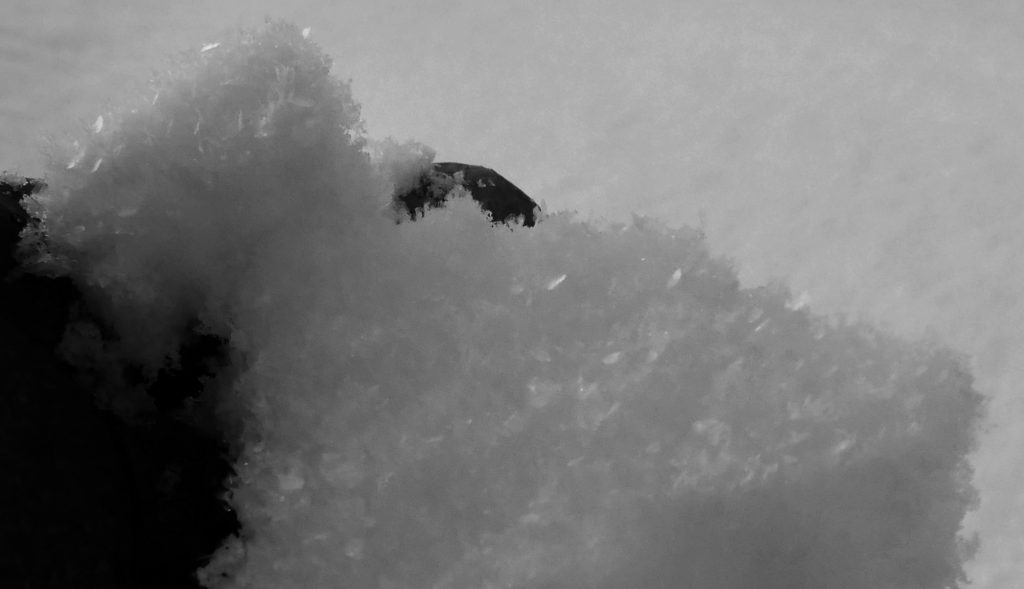 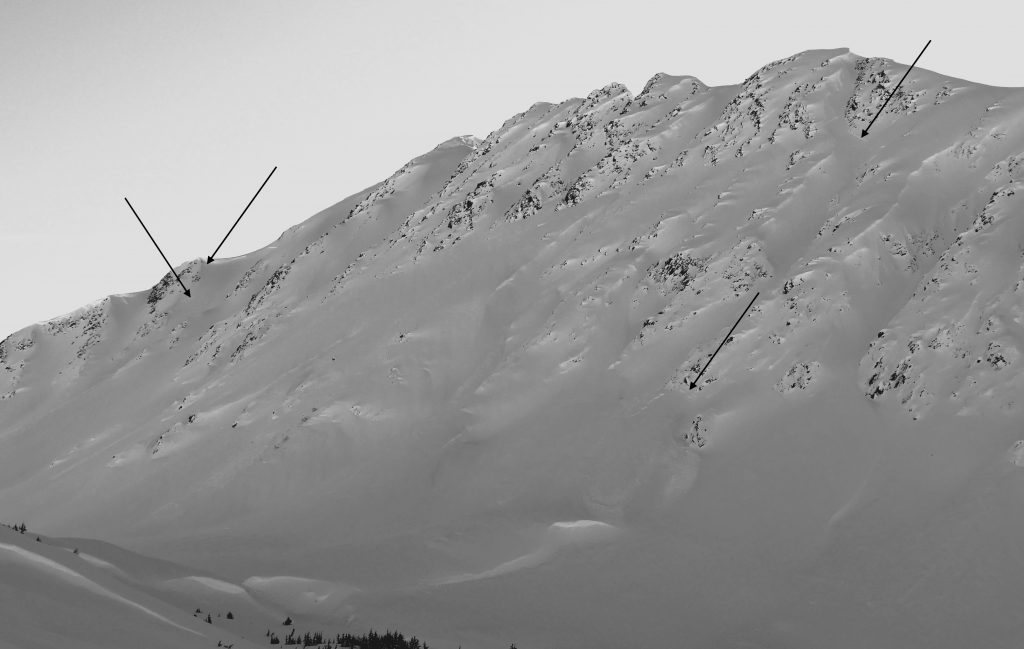 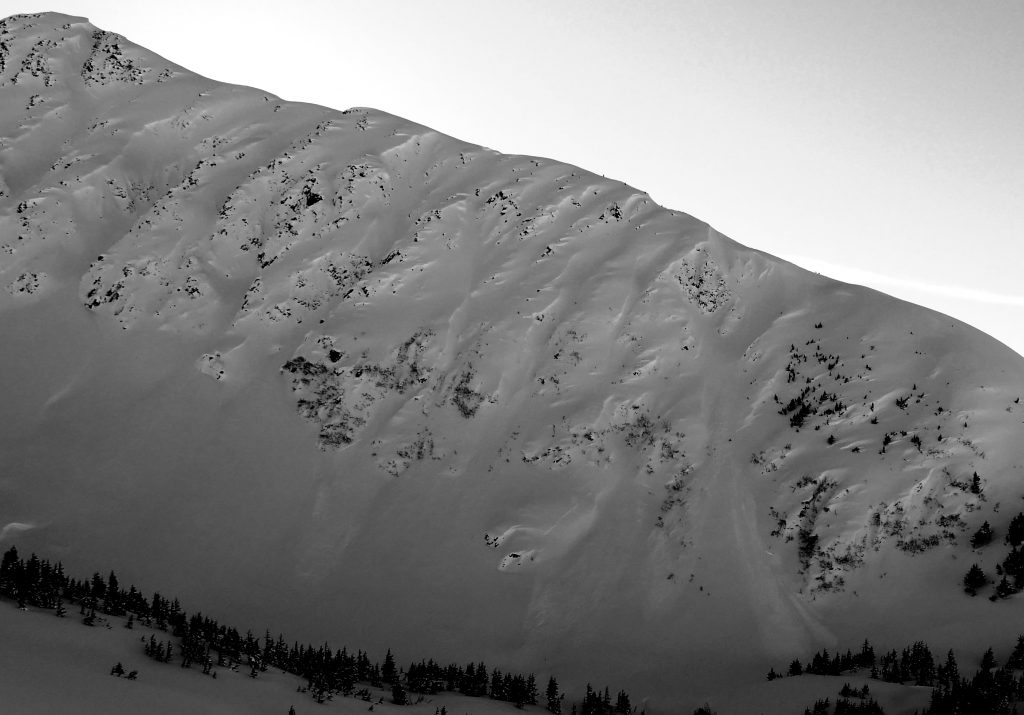 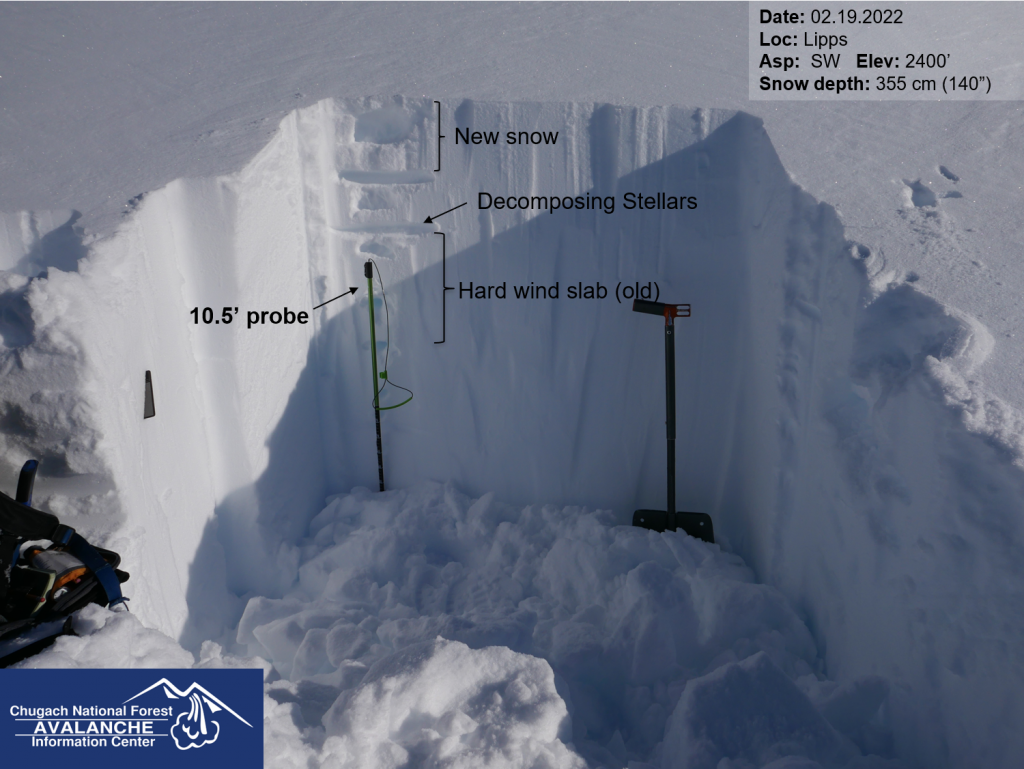 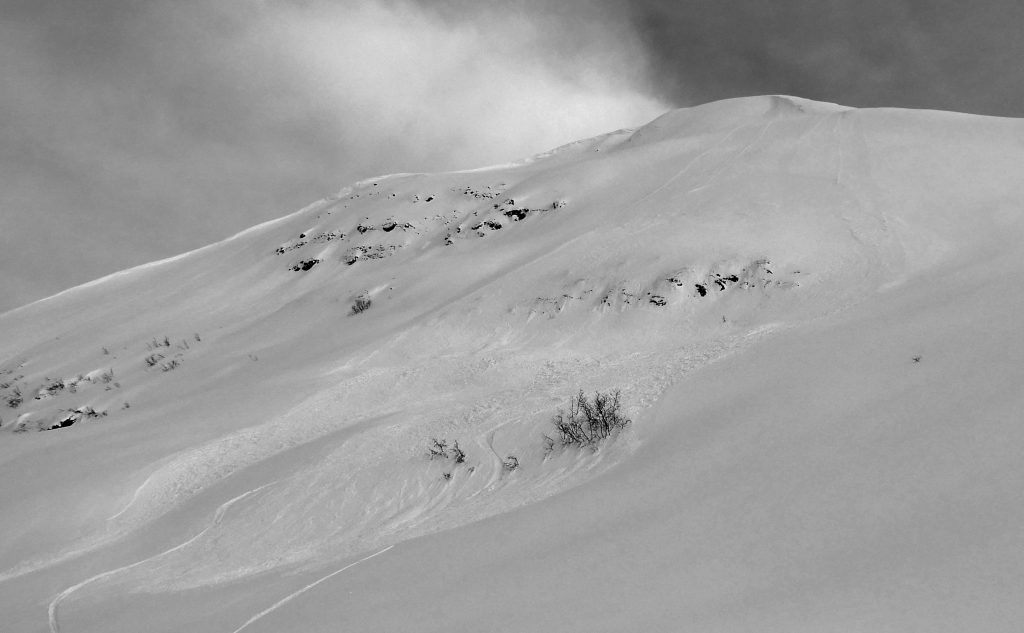 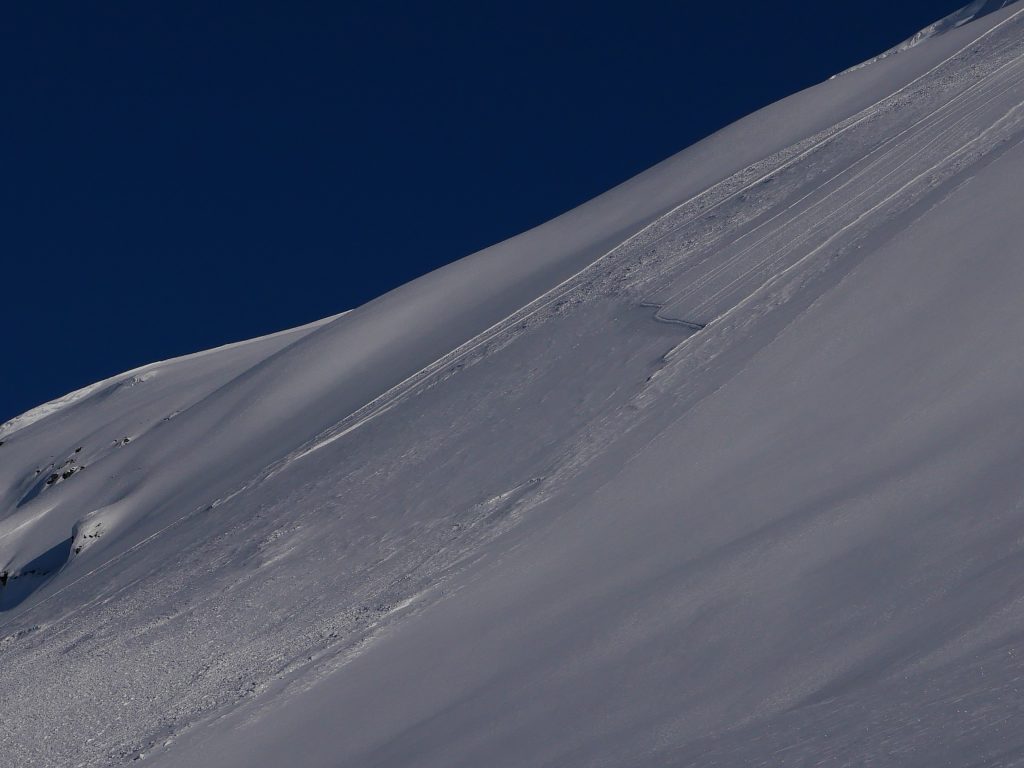 Crown of the avalanche we were hoping to get to. The avalanche was not huge, but it was big enough to bury a person and it seemed to be a similar depth to most of the rest of the activity around Turnagain Pass. It had been partially blown in after it released. Likely depth 1-2', triggered by loose snow avalanches releasing up slope. 02.19.2022 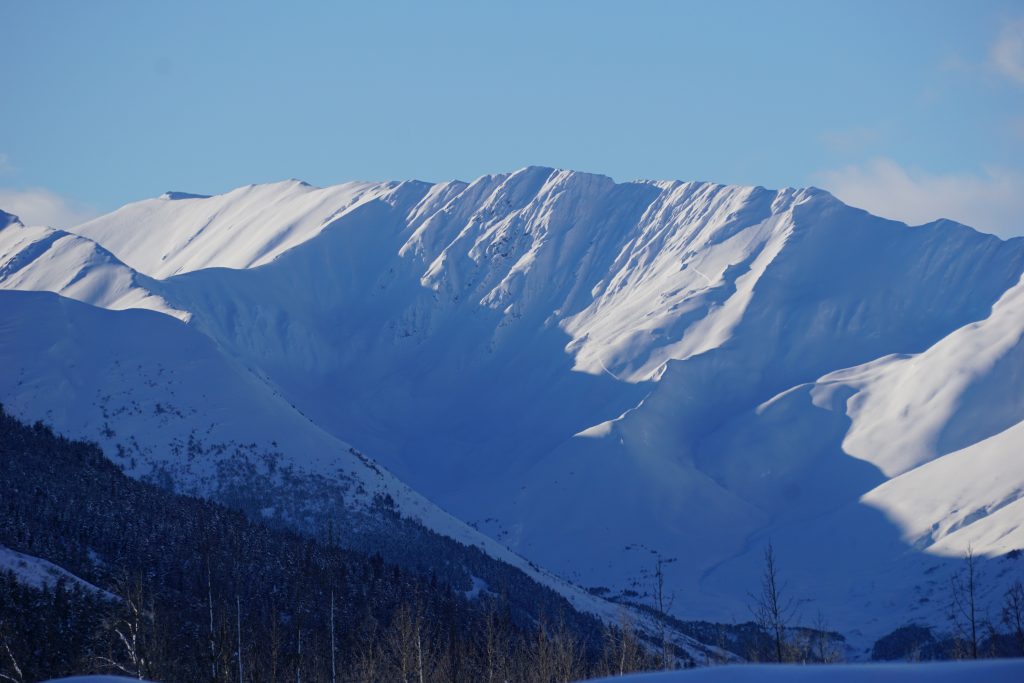 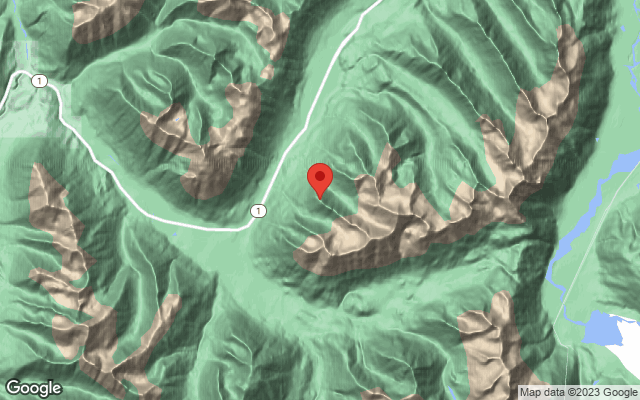