We had been skiing Harp Mountain regularly for the preceding several weeks in fine, stable conditions, and on Thursday we were hoping to catch what we’d come to perceive as a casual evening lap. The Arctic Valley weather station recorded consistent below freezing temperatures since the warming trend in town. Based on the weather data and our recent experience on Harp we wrongly committed to the notion that despite the recent sustained high winds, the snow might be fine.

We skinned around the fence (see forecaster comments below on access to the State Park land from Hiland Rd) at the end of Hiland Road to access the terrain just north of Back Bowl, and continued up the face. We were primarily focused on skinning up and skiing down before dark, and brushed off the marginal snow conditions as potentially frustrating but not dangerous. Intermittent boilerplate, breakable crust, and windblown powder characterized the snow surface. We switchbacked straight up the bowl, stopping just below the ridge. Adrian traversed south across a snow-free rib to set up for our descent while I ate a snack and waited north of the rib for his report.

Immediately after crossing the rib Adrian triggered a wind slab avalanche. The slab detached at a ~2-4 foot thick crown, and both he and his dog Susie became entrained in the debris. The slab propagated across the northeast facing slope along a ~1 km crown (see updated avalanche details/measurement below.) I tried to maintain sight of Adrian in the debris as he slid ~1000 feet down and into the prominent terrain trap gully at the north margin of the west-facing bowl.

I pulled my skins off and made 2 or 3 turns onto the bed surface of the slide before I heard Adrian yelling: “I’m alive! I’m ok!”. He was on the surface, uninjured, missing one ski and both poles when the avalanche stopped moving. Susie, Adrian’s dog, had also been caught in the slide but was not accounted for.

I skied down to Adrian and we began switchbacking the debris field looking for Susie. We descended another ~1000 feet to the toe of the debris, which reached nearly to Hiland Rd. We switched our beacons to search during our descent on the off chance that skiers may have ascended our track behind us. When we returned to the road there was a new car and skin track merging with our own. We flagged down a car and Adrian, with residents of the house at the end of the road, contacted the state troopers and began preparing for a search. I skinned back up to start searching by headlamp. I encountered the driver of the car about 10 mintues from the road, setting up camp south of the avalanche path.

Susie was not recovered. All people were uninjured and accounted for and the report was closed with the troopers.

“If there was a house in that path I think it would be in splinters. The crown is maybe a 100 vertical feet below the ridge and the toe of the debris is in the woods, maybe 100 yards from Hiland Rd. If it’s measured as horizontal distance I think it had to have run at least 5000 ft.

We returned yesterday (Feb.26) and found his (Adrian) body print and ski poles and probed for susie. The debris was deeper than our probes, but looked to be much deeper in other parts of the field. At its deepest there must be well over 10 feet piled up. Those pictures are from yesterday(Feb.26.)”

Yesterday(Feb.26) we observed a roughly 10-20 m zone of flagged trees and scoured surface surrounding the debris margin below the confluence of terrain trap gullies. We also noted that the knoll (indicated on the map) had been completely overrun by the avalanche, and was covered by up to 1 m of debris. I think this is important because I have considered the knoll a safe spot to stop skiing and watch my partners descend in the past.

Some rough quantitative estimates using the path measurement tool in Google Earth: I estimate that I was carried ~550 m downslope, and the distance from the crown to the toe is ~1500 m. To reiterate Bryan’s comment, probing between my recovered poles and below where I stopped, the debris/snow was >280 cm deep in probably 60% of the ~30 x 5 m grid we searched.” 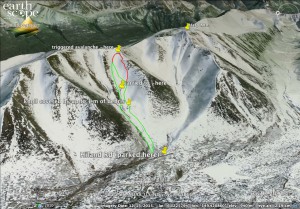 Adrian (the skier caught in the slide) was not wearing an airbag. He described trying to get off of the slab, but fell on to his back and watched his dog disappear in the moving snow below him. He describes the moments in the slide as follows: "I went from thrashing, swimming, fighting, kicking to putting my hands straight up as I was buried to my face. I continued struggling, but I think when the slide rolled me over into the terrain trap, I was sort of torpedoed up to my waist out of the snow. I saw where I was, where I was going, saw the powder blast in the trees below and began thrashing, fighting, swimming, kicking even harder until my legs and skis were above the snow. My left ski popped off and instantly disappeared in the moving snow, my right ski stayed on. I was close to the bare tundra surface of the rib at the north margin of the bowl and tried to thrash my way to it as the snow slowed and stopped. When the slide stopped I was sitting at the surface, my left leg partially buried, snow covering me to my shoulders, small blocks over my lap. I immediately began screaming "I'm alive" over and over."

We want to extend a big 'Thank You' to Bryan and Adrian for sharing such a detailed description of the events leading up to, during, and following the avalanche. By sharing the circumstances of what happened is an extremely helpful learning opportunity for us all. We are deeply sorry for your loss of Sussie. CNFAIC staff-

*We were recently informed that there is only one legal access to State Park land at the end of Hiland Road at the
cul-de-sac. The fence described in this report is private property and does have a 'no trespassing' sign place. For future access to this area please use the cul-de-sac access point. This information was relayed and acknowledged by the two skiers involved in the accident.

High winds, Temperature at or near freezing. 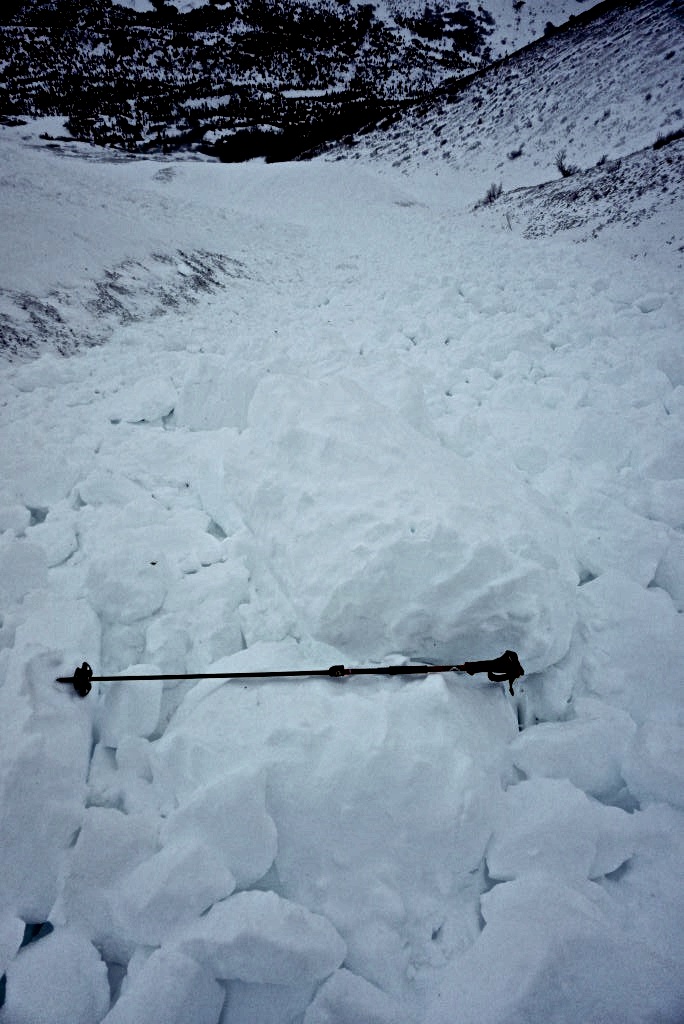 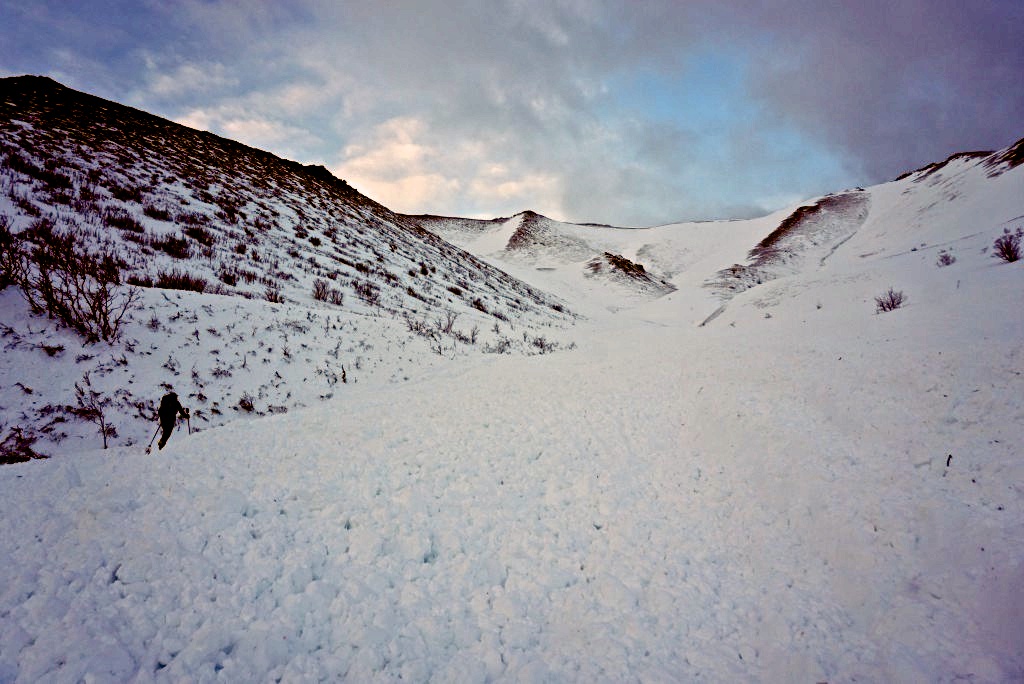 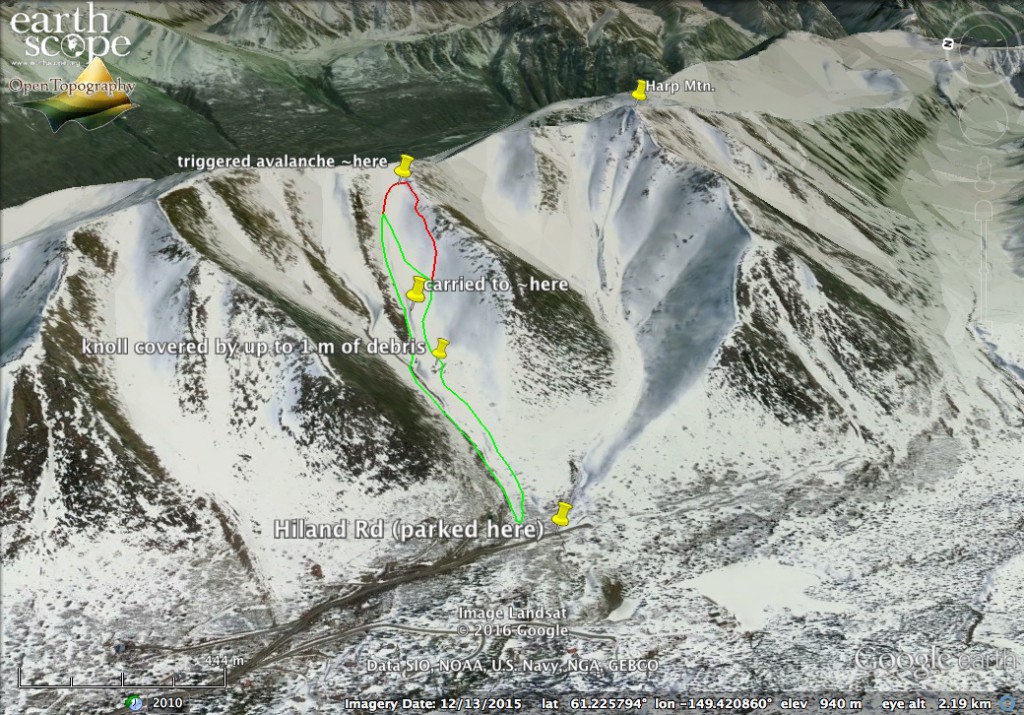 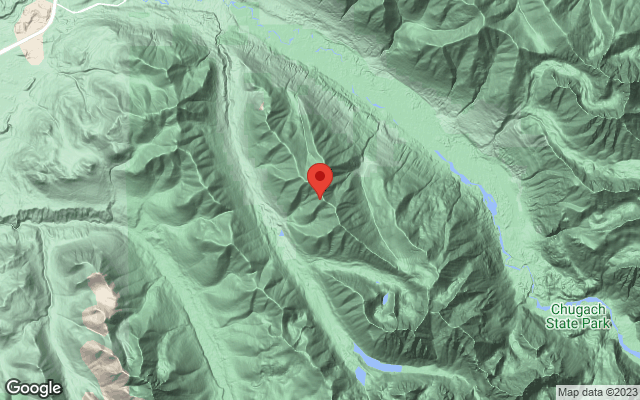