Toured up to the crown of a large recent avalanche that ran down to crow creek and powder blasted a nearby house. We dug a set of pits on the way up to evaluate whether it was safe to approach the crown. After completing a crown profile we descended on the bed surface.

On our approach we skinned across the debris pile from another avalanche that was just as big or maybe bigger than the avalanche we went to investigate. The crown had filled in, but it looked like the avalanche started up at the top of Surprise Bowl and ran far down into the bottom of Glacier Gulch (the gulley where the common skin track ascends). The avalanche ran an estimated 3000′ vertical, with debris piling up at least 15′ deep. The path of the avalanche was about a mile long on the map.

A natural avalanche from Monday around 11pm. The crown averaged 3' deep and was pretty consistent, with a few deeper pockets that were closer to 5' deep. We called it a HS (hardslab) - N (natural trigger) - D3 (destructive size) - R4 (relative size) - O (old snow bed surface)

Light flurries in the afternoon with calm to light winds. Cloud cover was broken to overcast. Temperatures were mild and felt warm at lower elevation when we descended.

Settled snow with up to 12+" deep ski penetration in protected areas.

We dug a set of snow pits at 2300' to evaluate the snowpack before approaching the crown. There were several thin crusts in the upper 50 cm of the snowpack that we thought might have weak snow above or below with potential to create propagation, but we didn't find any propagating results in our ECT tests. The New Years crust was buried about 120 cm deep and was 10+ cm thick and strong in this location. Below the New Years Crust were a layer of fist plus facets from November (down ~130 cm). This layer did not propagate in an ECT, but had a short cut length of 25 cm in our PST and a notable collapse in the weak layer when it failed.

We then tiptoed over the to crown crossing a few slopes that appeared to have produced natural avalanches during the Monday/Tuesday storm. The crown was about 3' deep on the flank at ~3000' where we accessed the bed surface. Overall, the snowpack structure was similar to our lower pits but the New Years Crust was not as thick or strong (see snowpit profiles in photos for details). The avalanche failed on the November facets that we had the short PST cut length on in our lower pits. 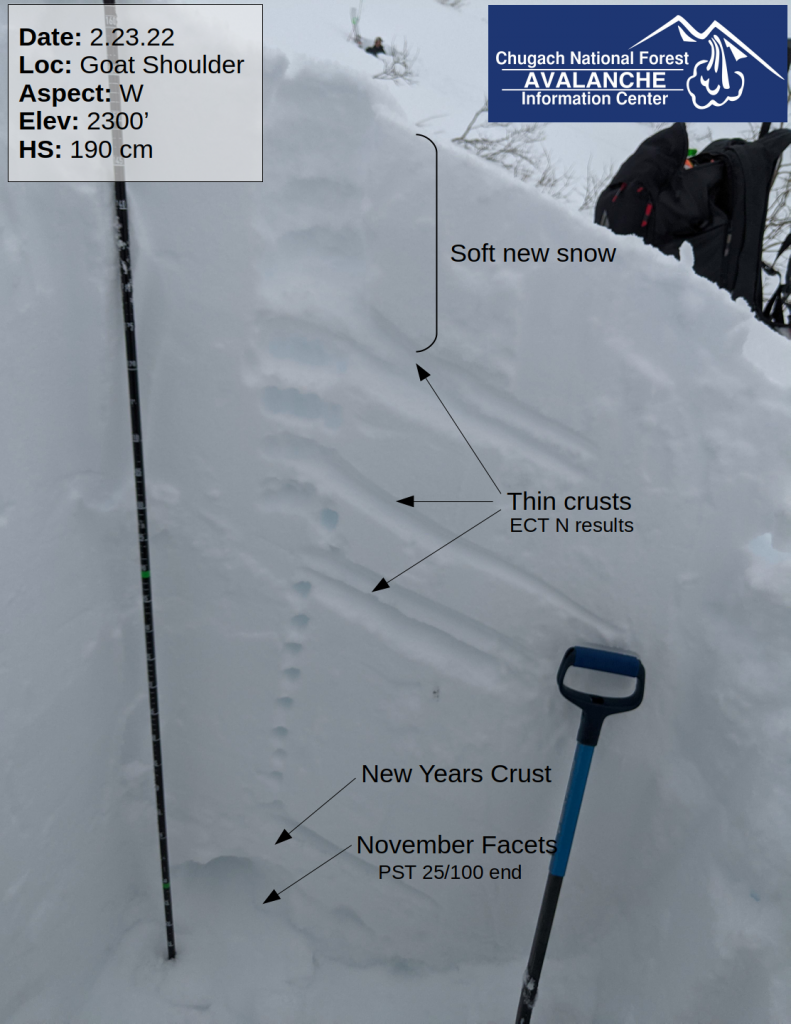 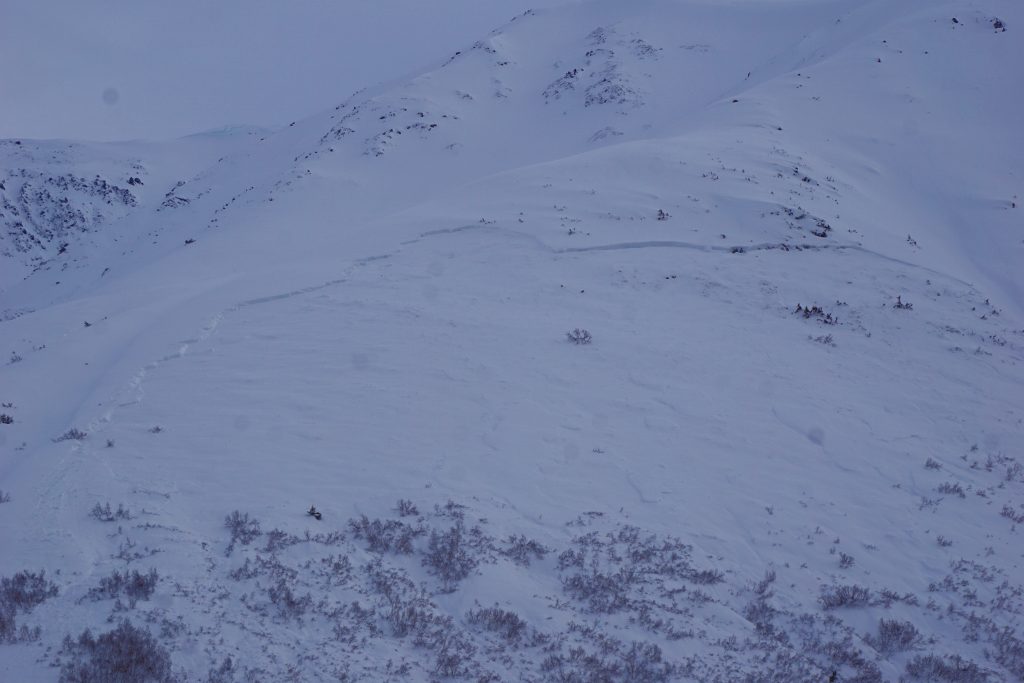 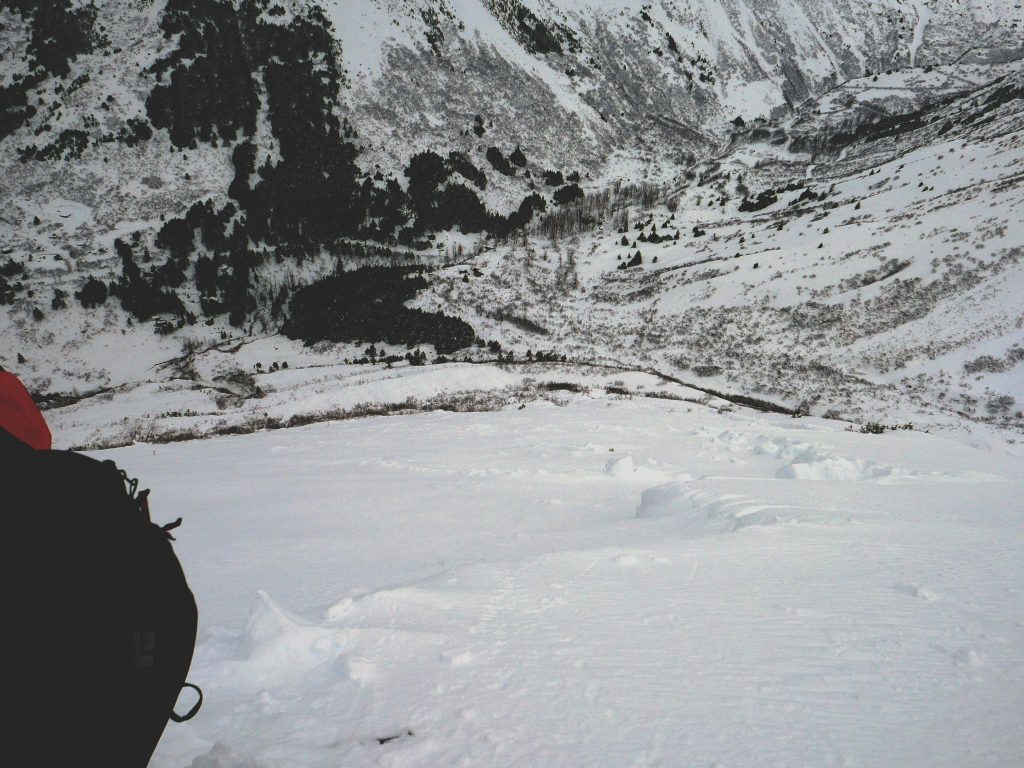 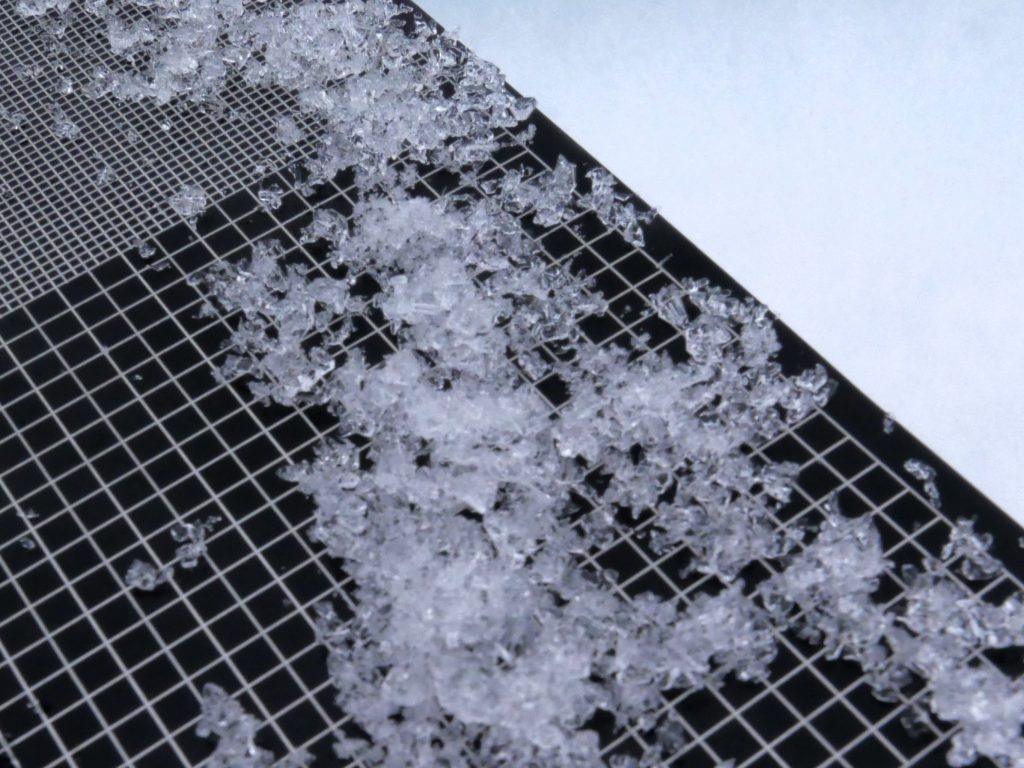 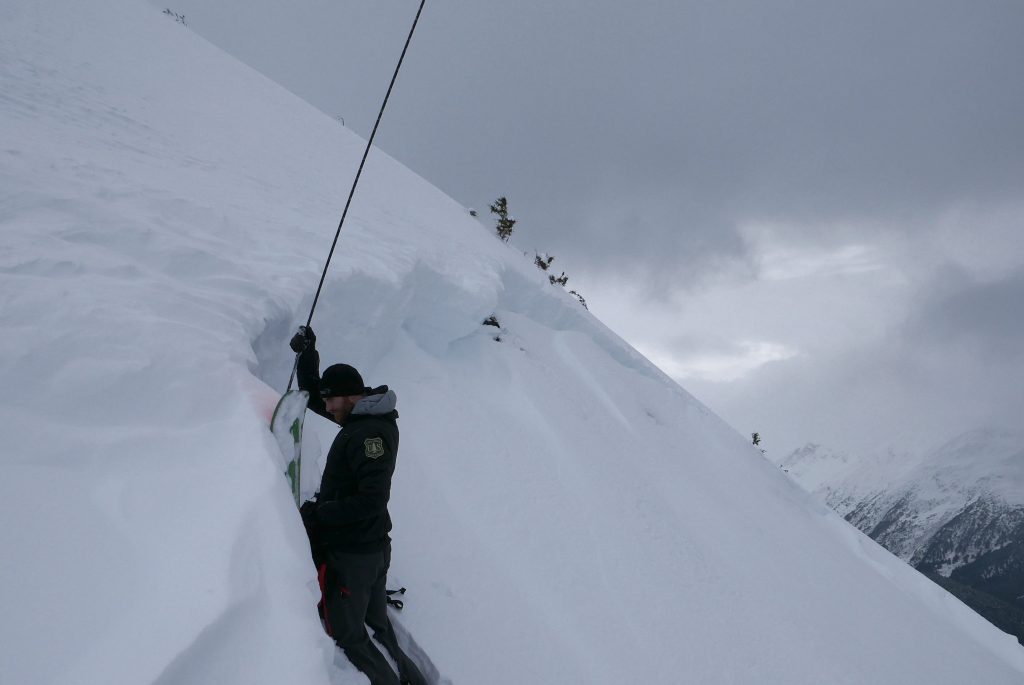 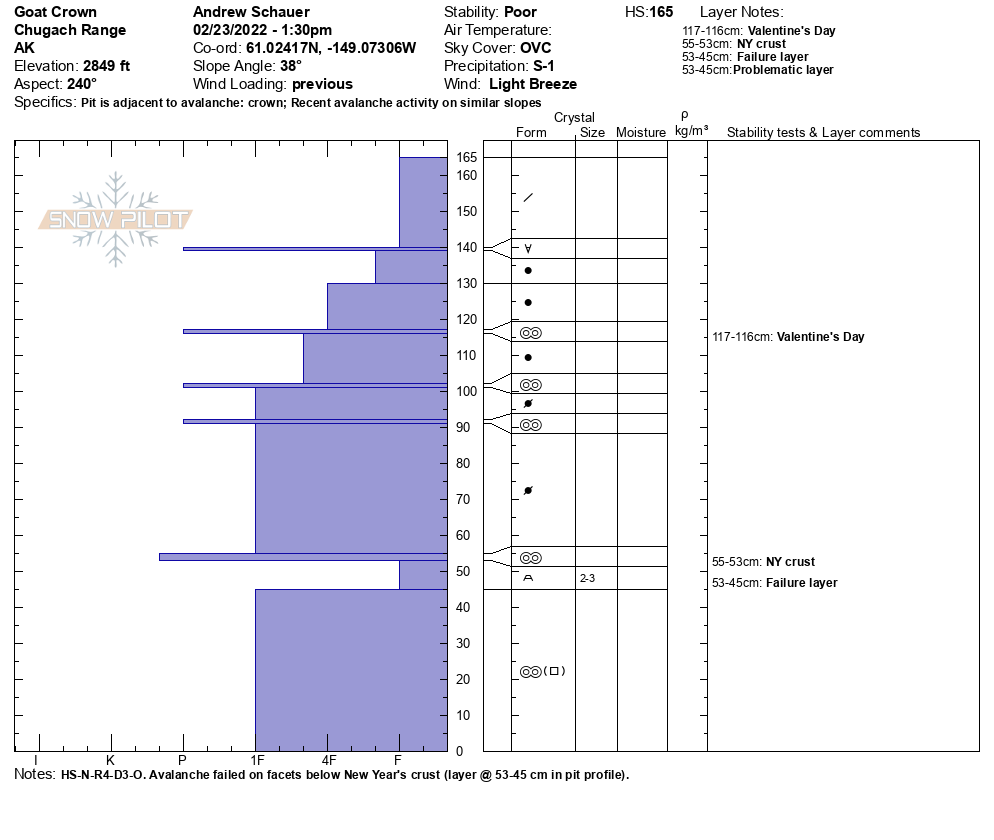 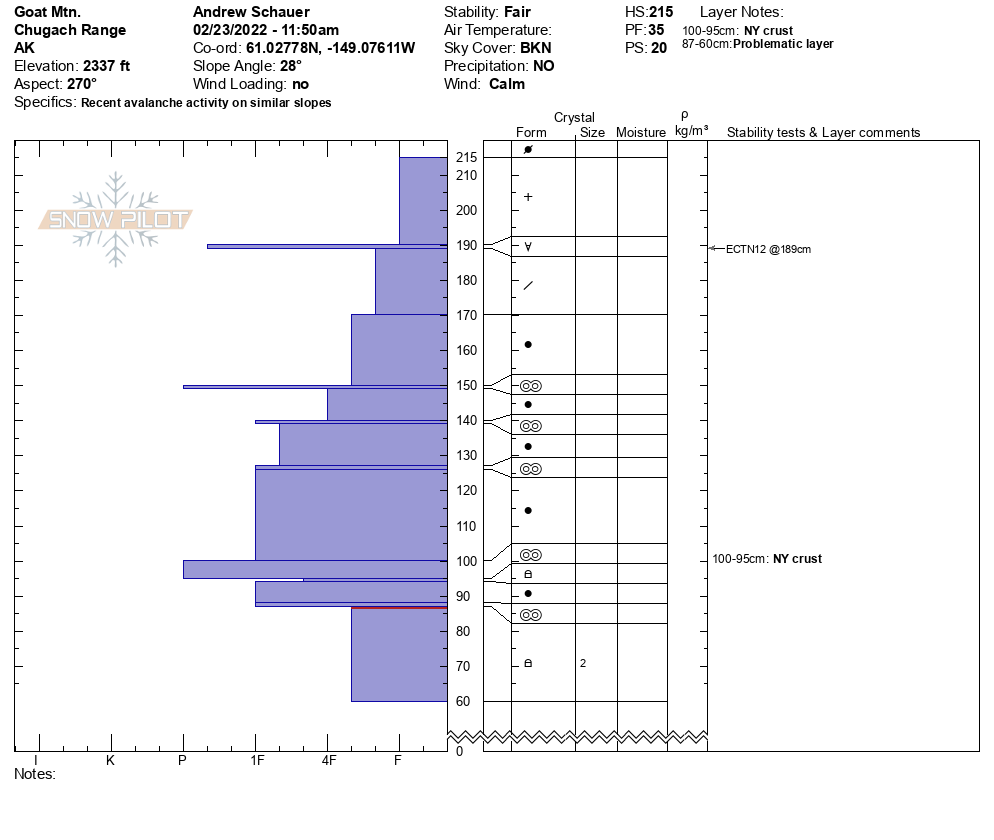 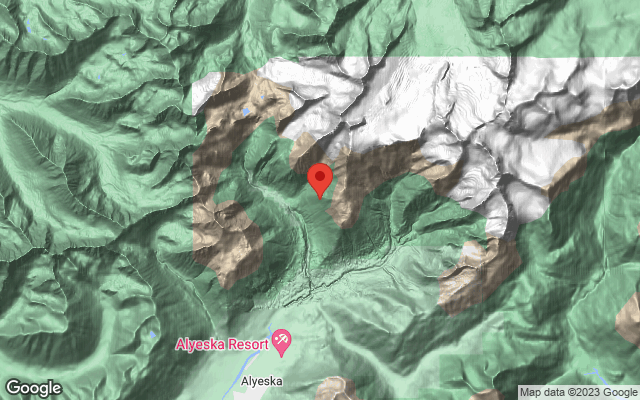