CNFAIC and ADOT&PF had a joint mission today to inspect the South facing start zones above the Seward Highway just South of Girdwood.

Weather:
Valley fog that gave way to brilliant sunny skies. Winds were calm and temperatures in the upper 20’s F.

Obvious Signs of Instability:
None

Snow Surface Conditions:
3-6mm surface hoar was seen forming on 2-6″ of varying degrees of loose weak faceting snow – this is from 1,500′ to 3,000′ (high point). The amount of near surface facet growth was variable and mostly confined to the few inches below the top 2″ of snow from Wed/Thur. At mid elevations (~1,500-2,500′) the pack is thin and a stout melt freeze crust sits under the loose snow. Here the facets are advanced and striated (see photo). At the higher elevations where the pack was thicker, the facet growth was not nearly as advanced. We saw this exact set up on Sunburst yesterday as well.

Sun Effect ?
Yes ! Can you believe it – Sun crust 1-2cm thick existed on due Southerly slopes with as low of a slope angle as 30 degrees (See photo). Often during this time of year with the sun so low, a steeper south slope is needed to receive enough shortwave radiation input to melt the surface snow. However, our top 2″ of snow is low density and relatively new. This is the easiest type of snow for the sun to affect and melt. Nonetheless, it was widespread enough to have to hunt for shade lines on the descent…

Radiation Recrystallization ?
Likely. This is a complex “near surface faceting” phenomenon that occurs on clear days when the sun creates a thin 1ish cm layer of melted snow 1-2cm below the surface – but not the surface itself – this is key. Meaning, incoming shortwave radiation is scattered when it first hits the snow, most of it is reflected back toward the sky but some is reflected deeper in the pack with a max absorption zone around 1cm, in yesterday’s case, below the surface. When this occurs a very steep temperature gradient results and high speed facet growth can take place. This is in the millimeter order of magnitude. What does this mean other than cool snow geek stuff? Well, crusty snow conditions to avoid and if it is widespread enough (not very likely) it can be a quick growing weak layer and bed surface combination for future snowfall events (also, not very likely right now…).

Snowpack:
We only dug in one place today at ~2,400′ SW aspect. Under the loose surface layers, the pack was strong and composed of a hard melt-freeze layer. Total snow depth was 120cm – did not dig to ground, the melt-freeze was remarkably hard and over 30cm thick. 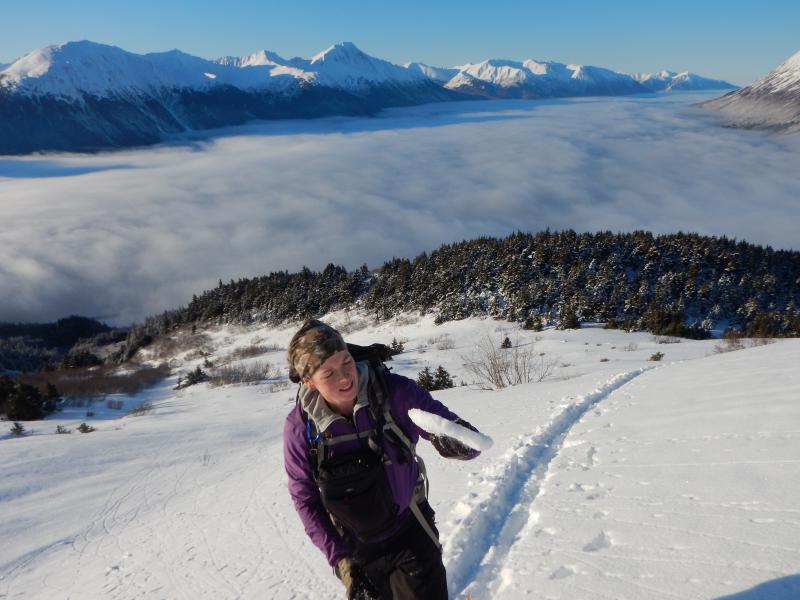 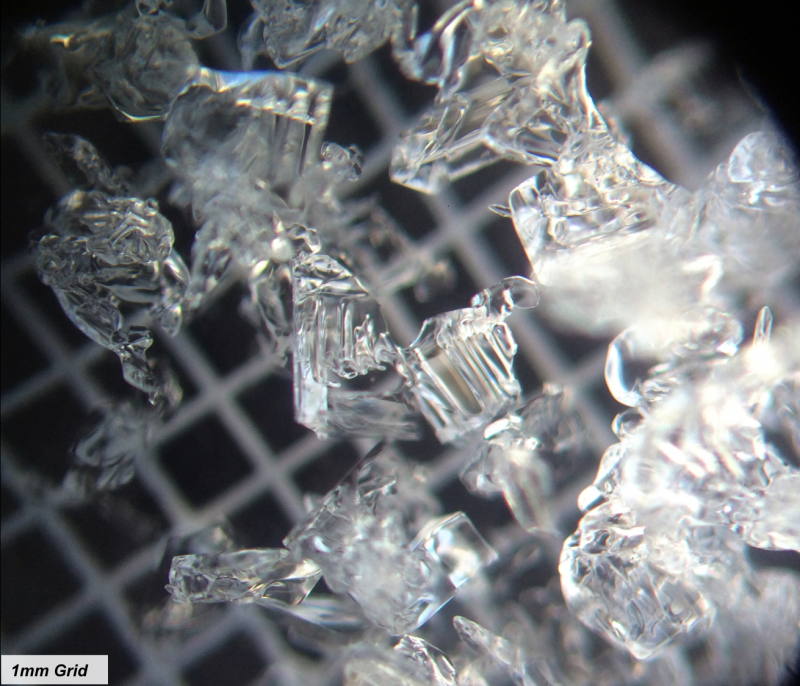 1-2mm chained facets 3" below the surface and 1" above the melt-freeze crust. ~2,000' South aspect in a thin snowpack zone 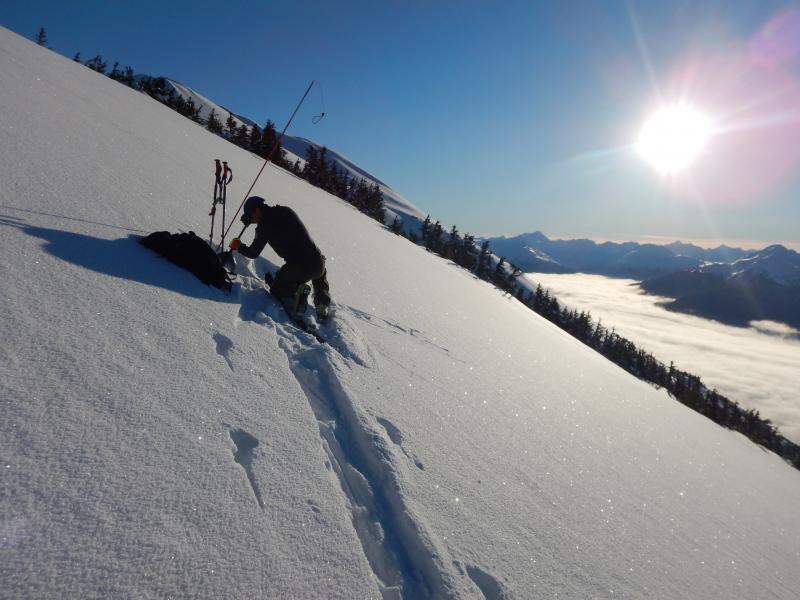 Digging in at ~2,400'. The surface snow is by far the most interesting right now as the pack is strong. 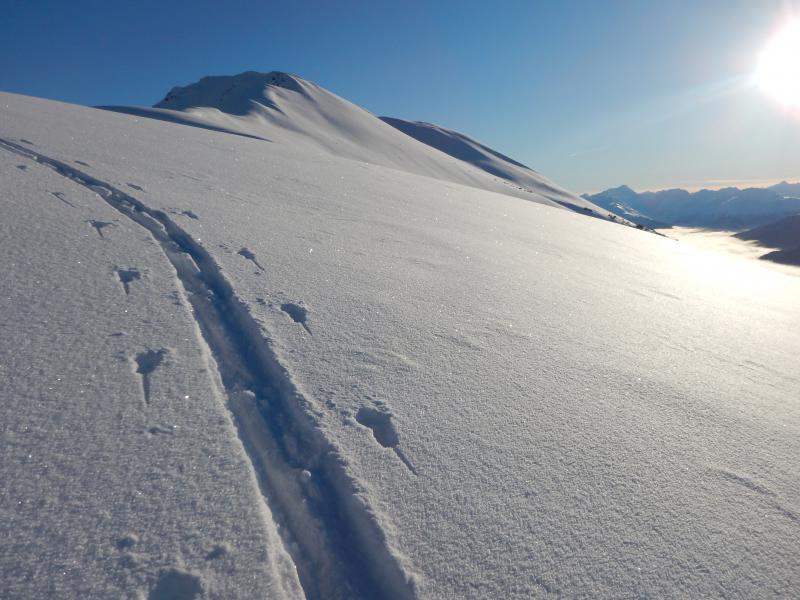 Still good snow to be had up high 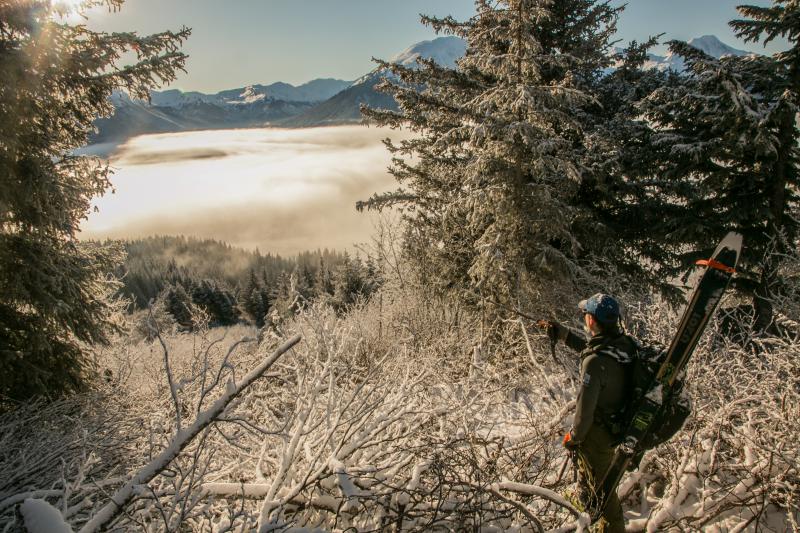