Toured to about 2900′ on Fresno ridge, stopping to dig pits at 1950′ and 2620′. The snow surface from the road up to treeline was variable, with some wind loaded pockets but mostly soft snow on the surface. There was around 4-6″ from the most recent round of snow earlier in the week sitting on top of multiple layers of facets and buried surface hoar. Once above treeline, it was obvious the area has seen a lot of wind. Surfaces were wind slabs of varying hardness, sitting on top of facets. We got one large collapse traversing a mellow slope that had been previously wind loaded.

We got one large collapse at around 2700' on a previously wind loaded slope. We think the problem layer is at the top of the thick layer of facets that formed above the Halloween crust. This would have been the Veteran's day storm interface, which still was harboring buried surface hoar in our pits, but may also just be a subtle difference between two layers of facets on other slopes.

Variable. There was 4-6" soft snow on the surface below treeline. There were a lot of small pockets that had a thin wind slab (or in some cases more of a wind skin) just below the surface that was nearly impossible to recognize before skiing or skinning across the slope. The wind had hit hard above treeline, with various surfaces. Some were scoured down to the Halloween crust, others had been loaded with a firm wind slab at the surface.

Four pits total, two at 1950' and two at 2620'. Depth increased with elevation, but the main features were similar at and below treeline:

-4-6" new(ish) snow at the surface
-10-12" faceted snow below the new snow
-Pencil to knife hard crust below the facets.
(More details in attached snowpit profiles)
-A mix of crusts and facets below the Halloween crust surface.

With total snow depth of only about 2' at 1950' elevation, and around 3' at 2620' elevation, the pack here is much thinner than the Turnagain Pass and Girdwood areas. The other big difference in Summit compared to Turnagain is that there is more going on in the lower half of the snowpack. This includes a layer of facets just below the Halloween crust surface. Main concern for the day would have been triggering something on those facets above the Halloween crust on a slope with a wind slab on top. Going forward, there are multiple layers of weak facets in the upper half of the snowpack that could become a problem with another loading event (wind or snow). 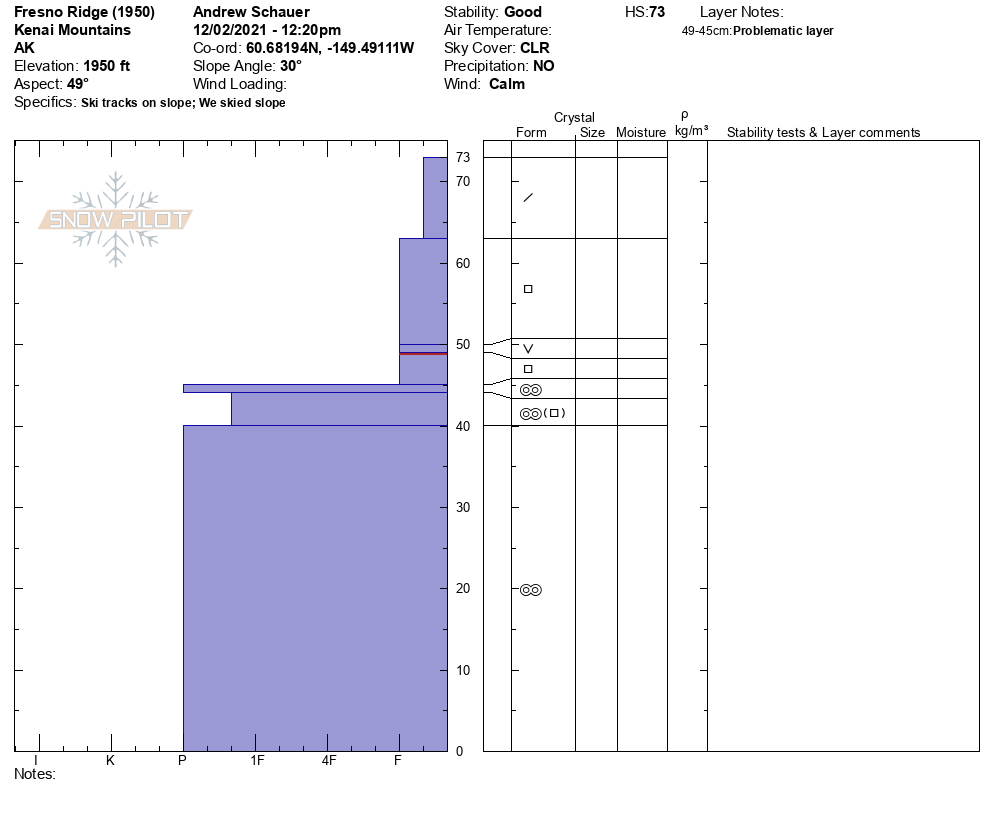 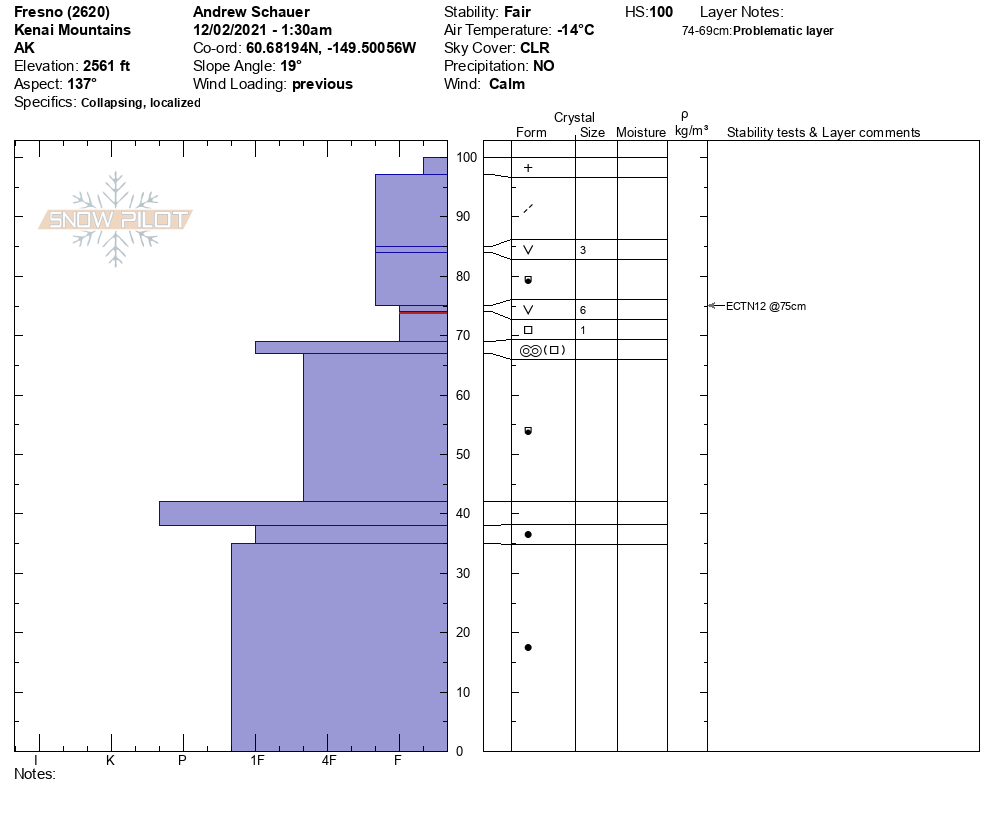 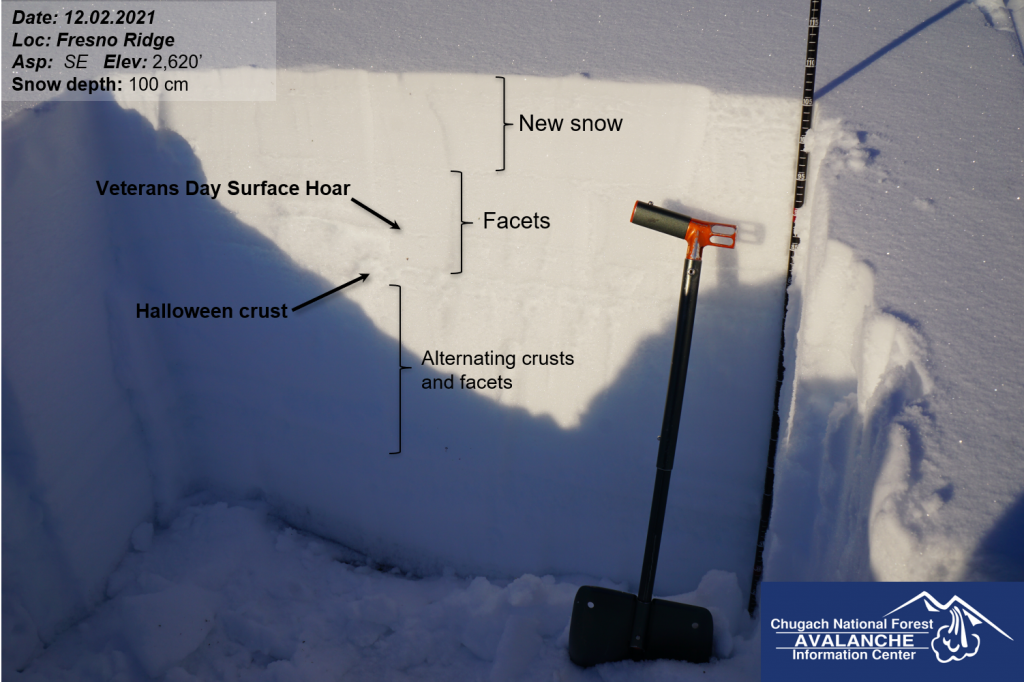 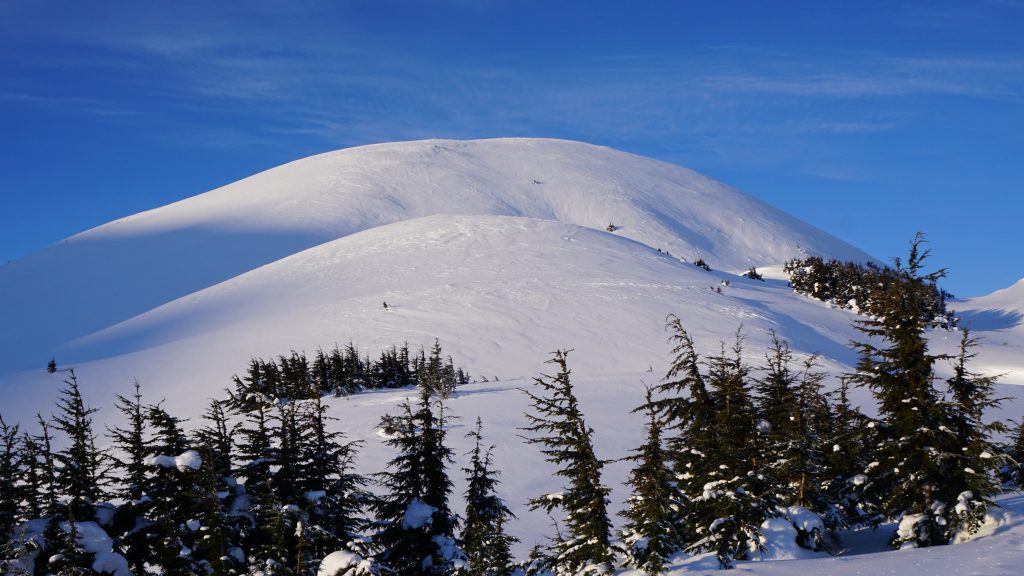