We ascended an East facing sub-ridge of Frenso and turned around due to increasing strong winds and shooting cracks. While we were taking off our skins before descent an avalanche released on a prominent East facing slope and funneled into a gully just North of our location. We descended our general route and regrouped around ~1600′. As we looked at the previous avalanche, a second natural released from the upper portion of the same gully, SE aspect. A large powder cloud caused us to move quickly down slope a few more hundred yards. When it stopped most of the debris funneled into the gully, but a portion may have crossed a small section of our skin track where debris crested onto the sub-ridge. This detail is unconfirmed. Both of these avalanches were much larger than we had expected. The second avalanche appeared to have entrained into old snow near the ground.

In hindsight we minimized the potential size of the avalanche hazard and the amount of snow being transported. Our route was not ideal for the conditions we encountered. We estimated that some of the gusts we experienced just before turning around were 40-50mph and likely much stronger near ridge tops. We were all familiar with this route and had previously measured slope angles to be less than 30 degrees where we intended to go. However we underestimated the overhead hazard and how far and fast a cold snow avalanche could run in the terrain we were in. 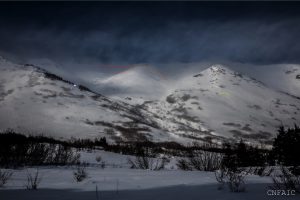 We witnessed three natural avalanches triggered by strong winds during our tour. The first was a small D1.5, 50' crown and ran 150' and released mid slope. The other two were much larger and starting zones were near ridge tops.

1500' - 6-8" loose snow in protected areas and wind stiffened snow everywhere else
Variable surfaces above 2000' - windslabs average 8-10" thick and pillowed up to 15" thick, exposed crusts and anti-tracks

Dug hand pits and found 5-8" of snow sitting on near surface facets on a firm curst. Above 2000' this snow was more reactive and slabs were 8-15" and sitting on facets on a crust. This crust was thin less than a cm, breakable. In some places this crust was blown clean and buried surface hoar was found within this crust, and suspect it was the MLK layer. We did not dig any test pits due to deteriorating conditions. 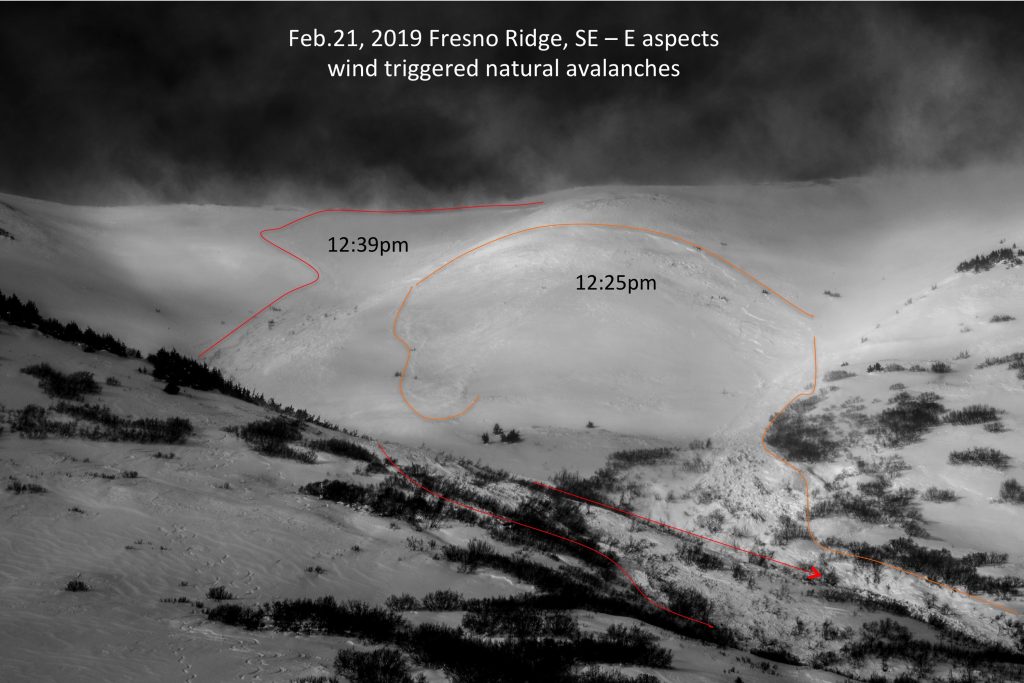 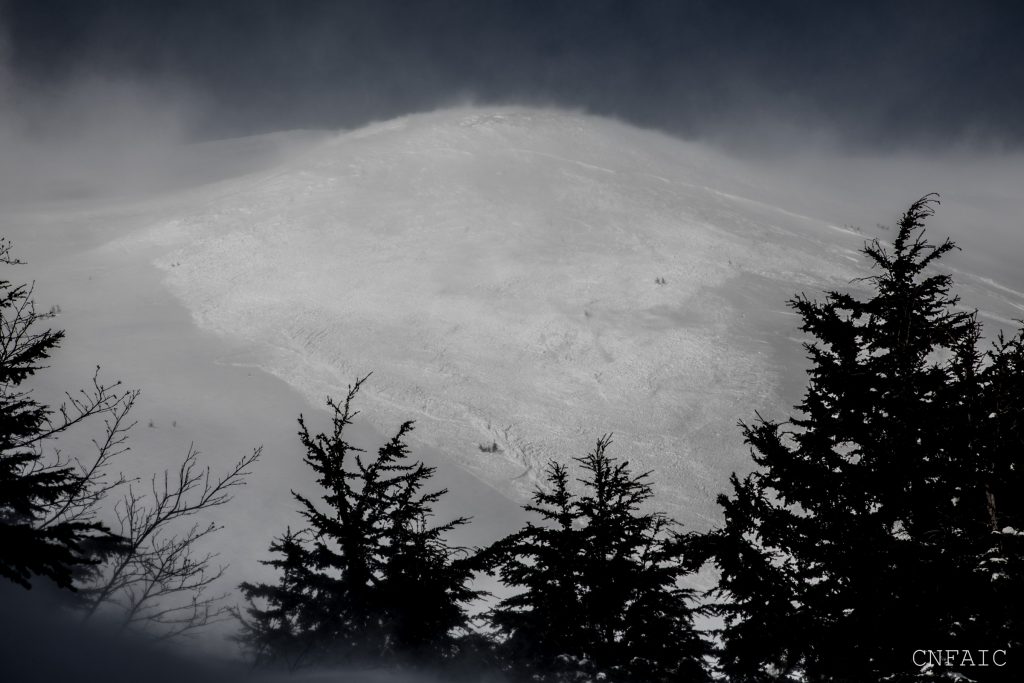 A view of the first avalanche crown from our transition spot. 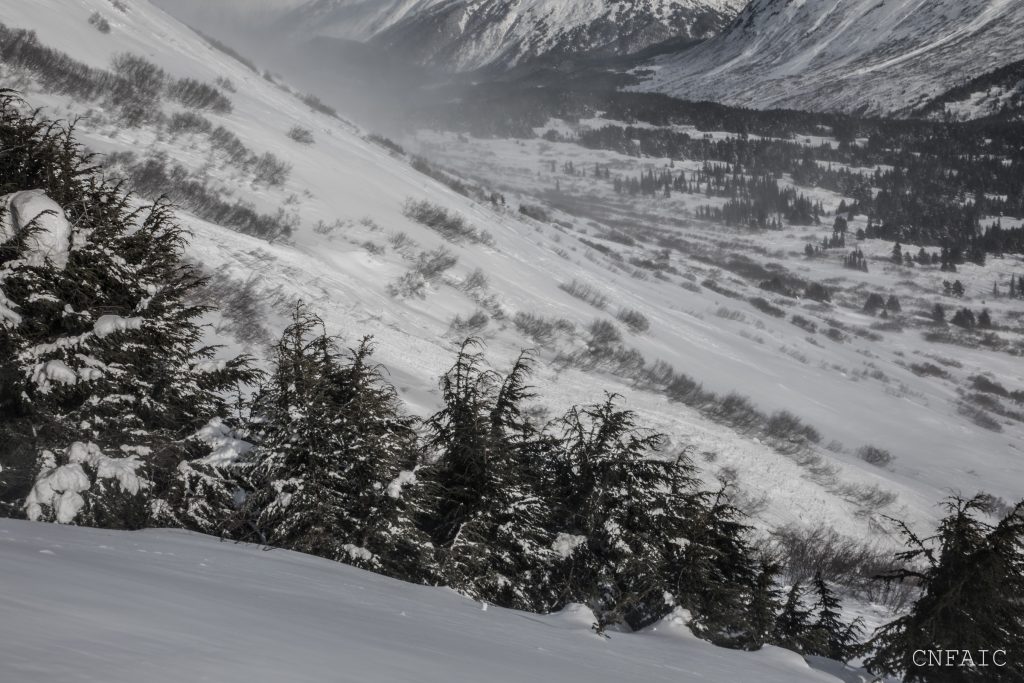 A view of the debris from the first avalanche at our transition spot. 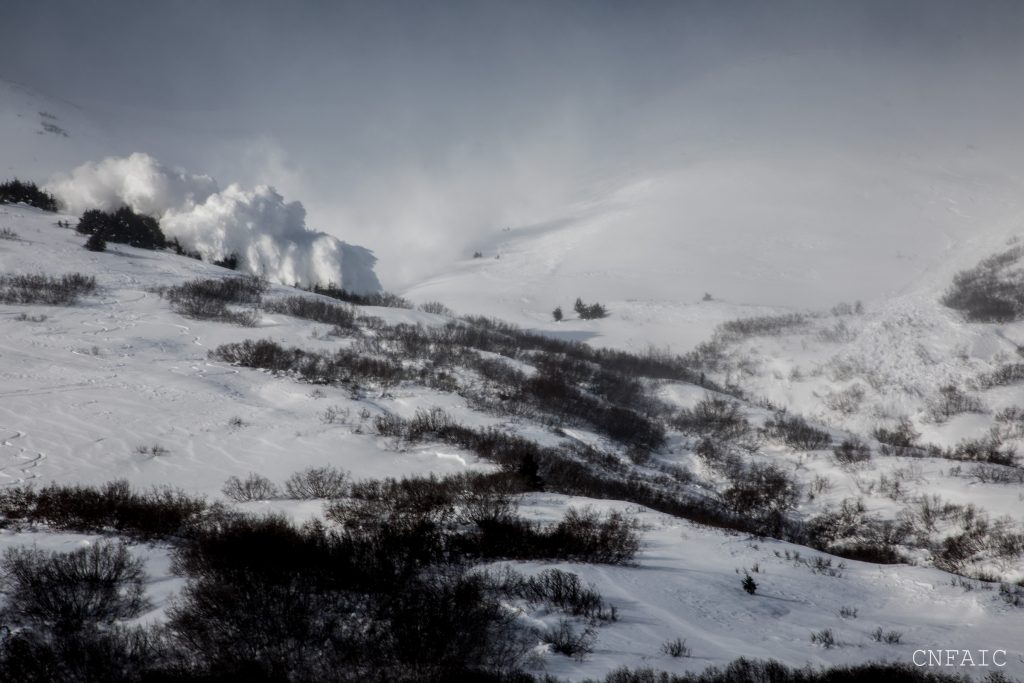 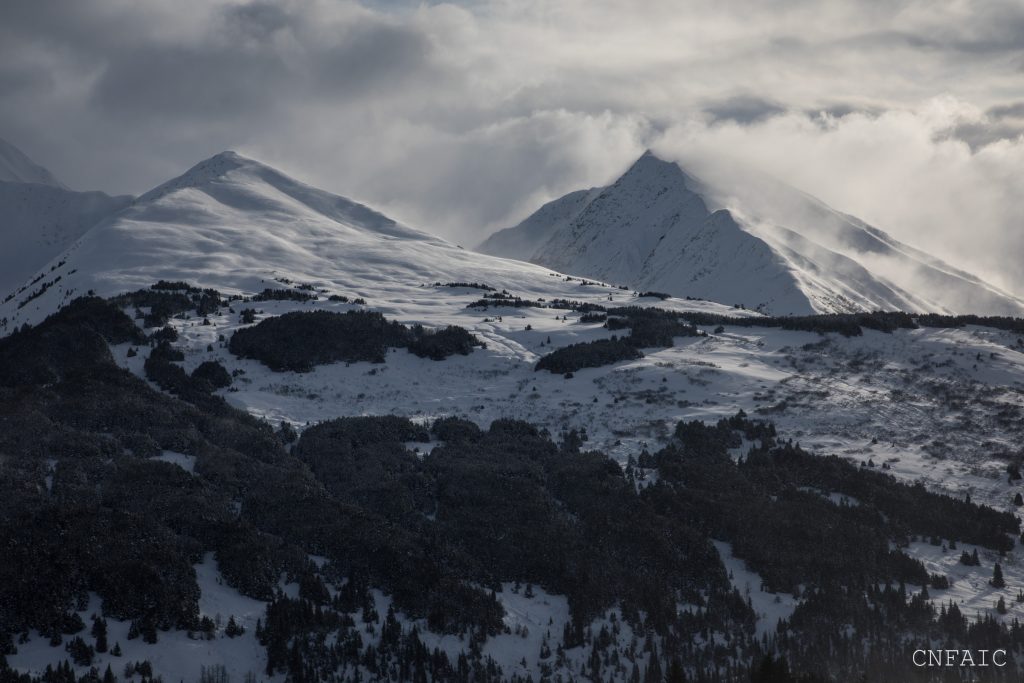 Winds blowing off of Manitoba and Spirit Walker 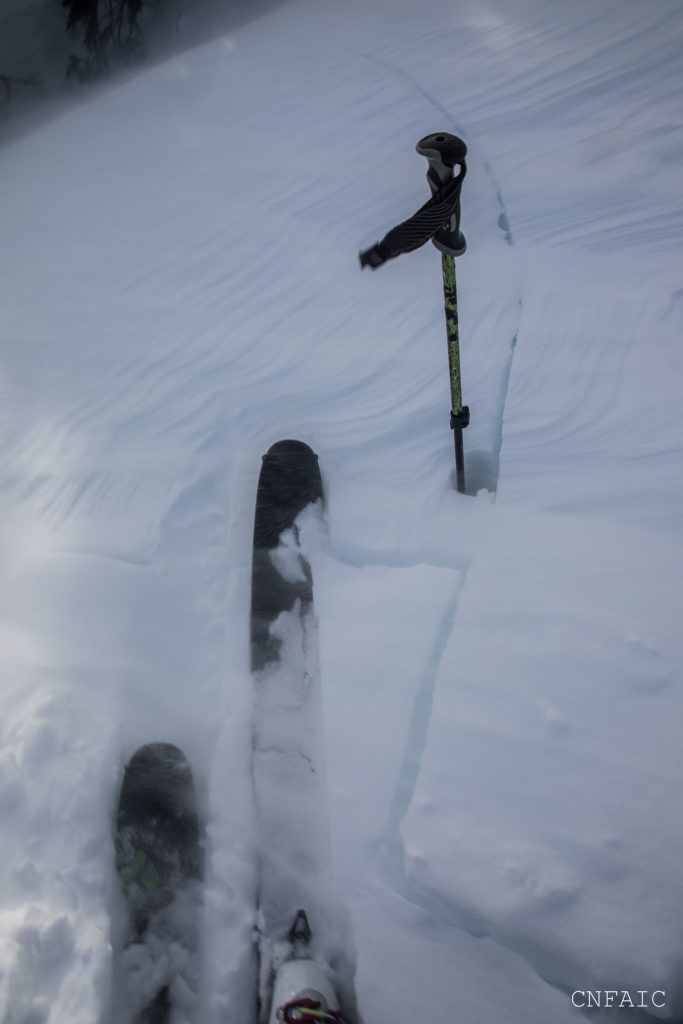 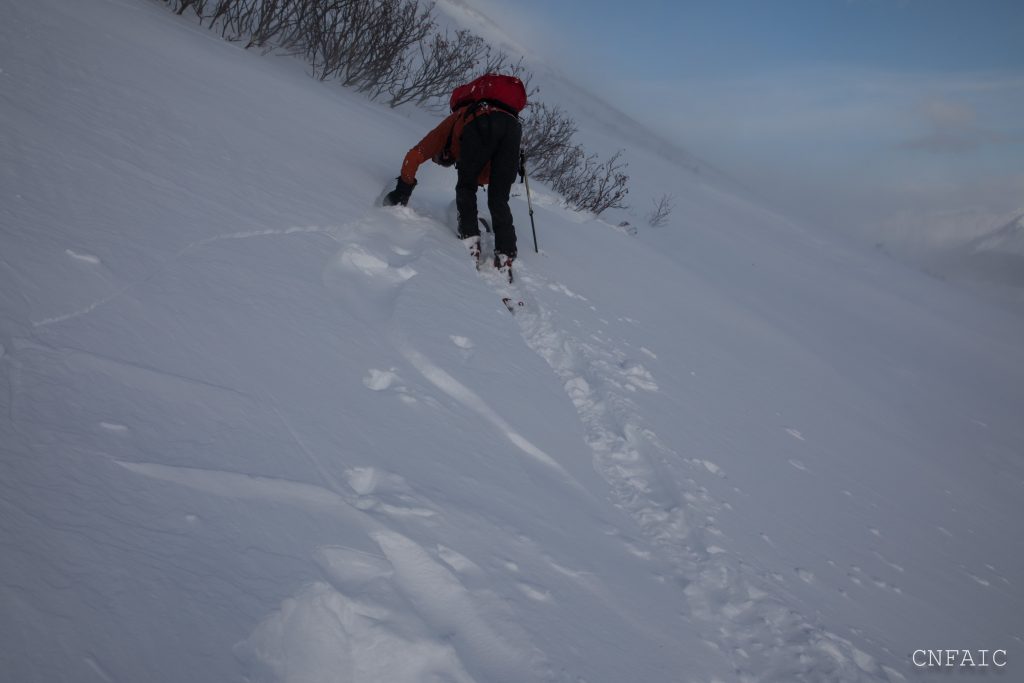 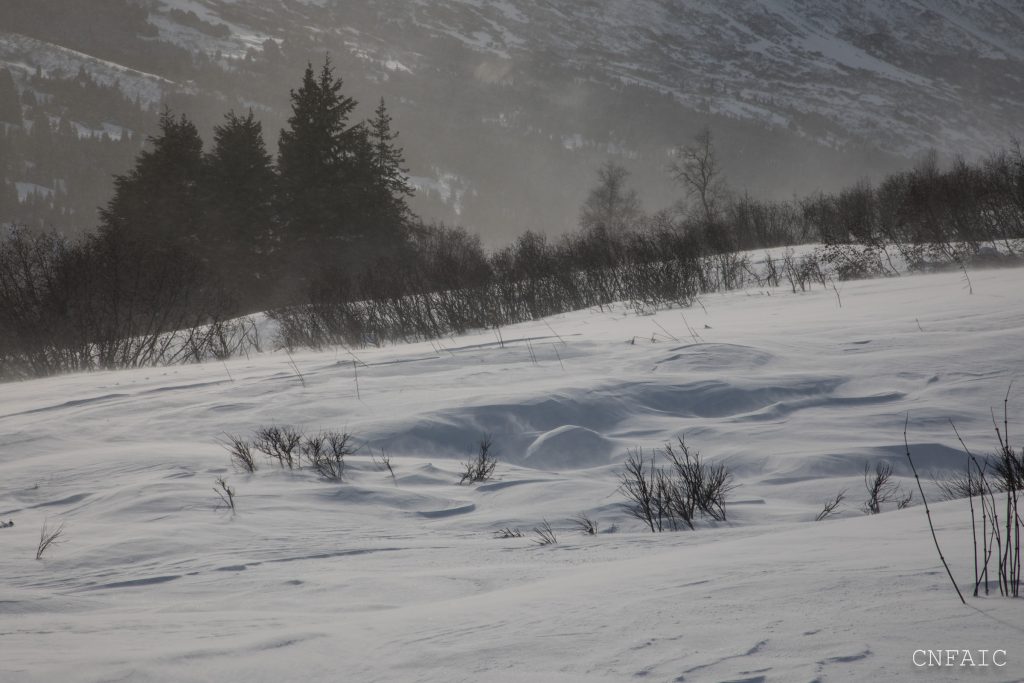 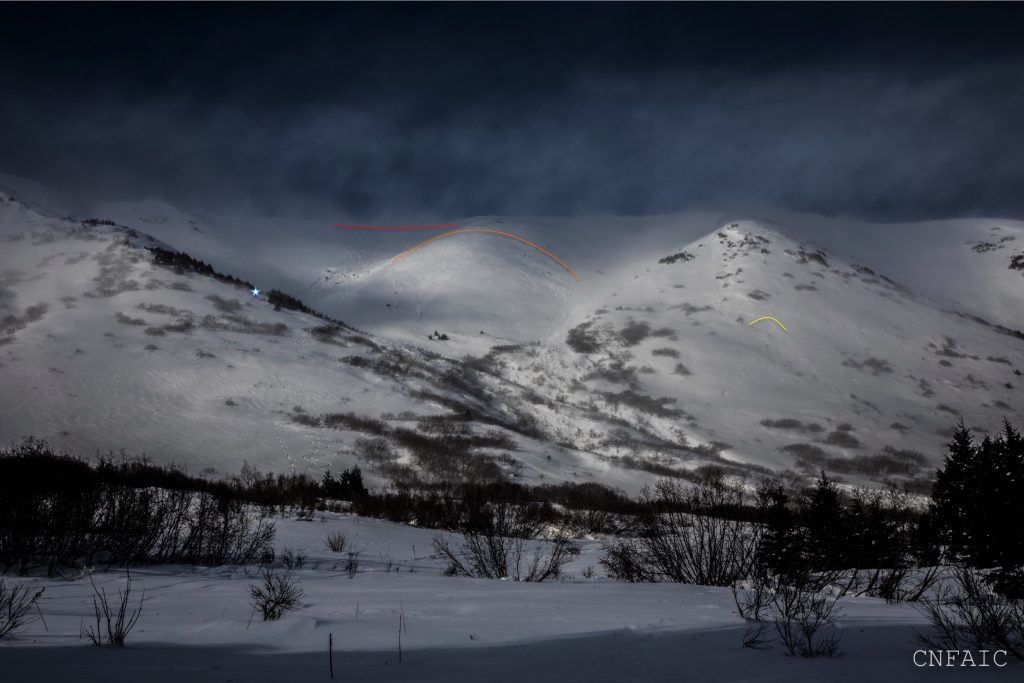 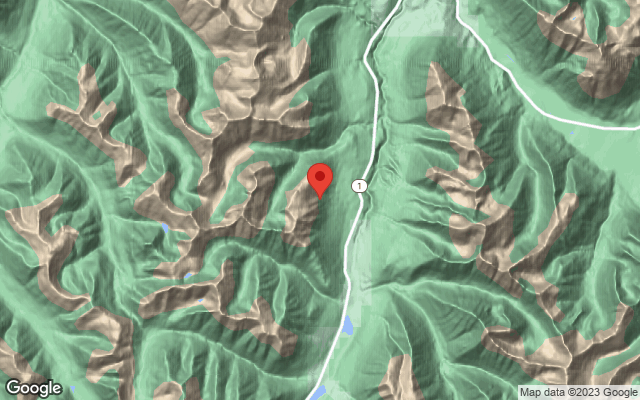