Final Report:  Information in this report was provided by the rescuer, Chugach State Park rangers and CNFAIC staff.

Type: Hard Slab
Problem/Character: Wind Slab
Crown Thickness: 2-3 feet
Width: 300 feet
Vertical Run: 200 feet
Trigger: Foot penetration most likely*
Weak Layer: Hardness change
Aspect: NW
Elevation: 2,500 feet
Debris: 3-8 feet deep
Note: Much of the avalanche site was blown in with snow due to strong winds not only at the time of the avalanche but for the following day during our investigation. We were unable to find the burial site due to the wind blown snow covering much of the debris.

WEATHER and SNOWPACK:
Intermittent snow showers and light winds during the week before the avalanche added between 4-8″ of new snow to the area. On the day before the avalanche, easterly winds recorded at the Glen Alps Near Anchorage weather station (2192′) rose to 10-20 mph with gusts in the 30’s mph as a warm storm was moving in. On the day of the slide, easterly wind increased to 30-35 mph with gusts near 50 mph. Additionally, a light rain/snow mix was falling and temperatures were warming into the mid-upper 30’s F at the avalanche site. The site is suspected to have seen stronger winds than the data from the weather station that sits ~300′ lower in elevation. These winds transported the new snow along with any additional loose older snow and built large drifts, wind slabs and cornices. Furthermore, the warming temperatures are believed to have encouraged this process by allowing the snow to bond together easier. The slide was triggered at the peak of the high winds and likely when the slope was the most unstable. The following day, severe wind effect was present and total snow depth in the area varied from no snow (scoured ground) to large hard wind drifts 6 feet or more thick.
Much of the avalanche site was blown in with snow due to strong winds not only at the time of the avalanche but for the following day during our investigation. We were unable to find the burial site due to the wind blown snow covering much of the debris.

Historical Significance: This avalanche path has slid earlier this season at least once as can be seen in a photo below from two days before the slide. The path is a common repeat offender for wind slab avalanches and cornice falls. It is in a notoriously windy area and sits on the lee side of the prevailing winds. There have been many close calls with people being caught in this path and one fatality in 2006 when a snowshoer was killed.

Time frame – rare successful rescue after 1 hour burial: A party of three hikers returned the following day to speak to Chugach State Park rangers and confirmed they saw the avalanche and the debris at 1:17pm but did not see any evidence of a person buried underneath. This helps to confirm that the hiker was indeed buried for a minimum of 1 hour and a maximum of 1.5 hours. 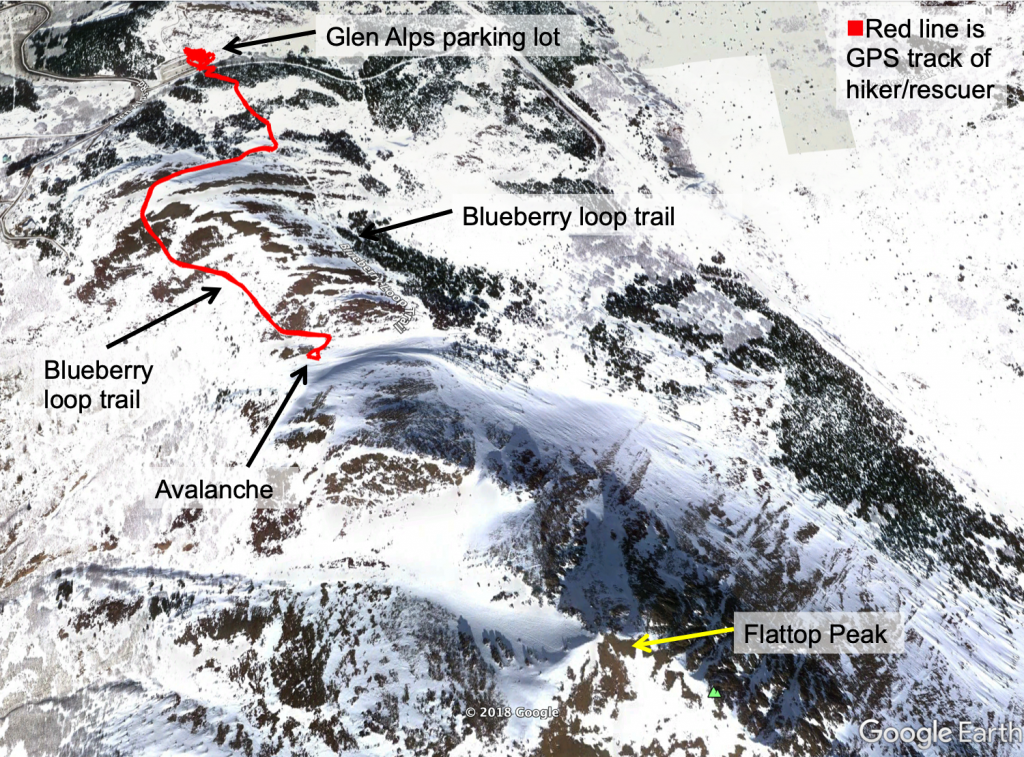 Google Earth image of location of avalanche, wider angle to show reference. The red line is the hiker/rescuer's GPS track. 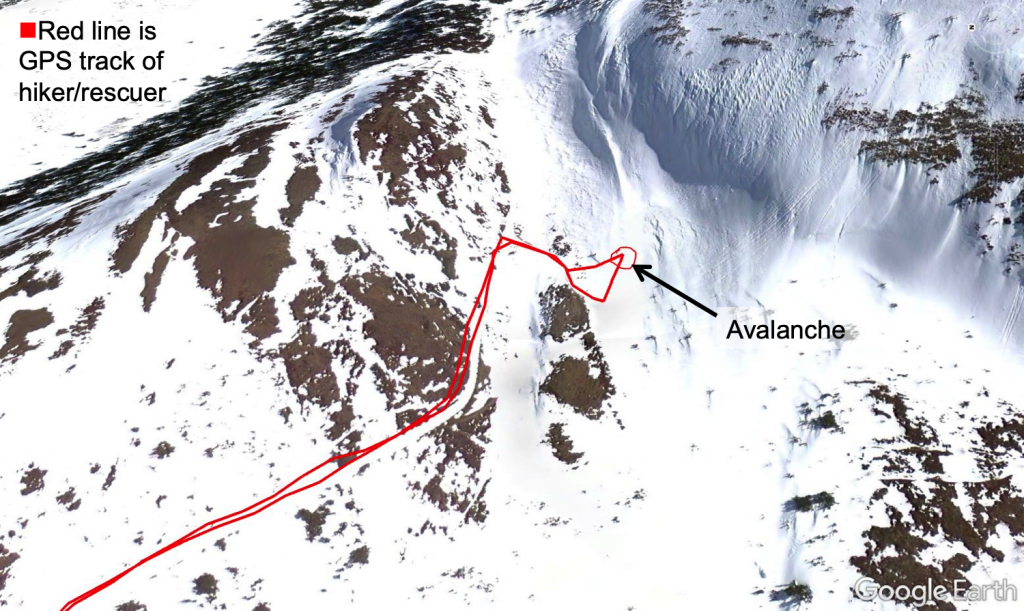 Closer up Google Earth image of location of avalanche. The red line is the hiker/rescuer's GPS track. 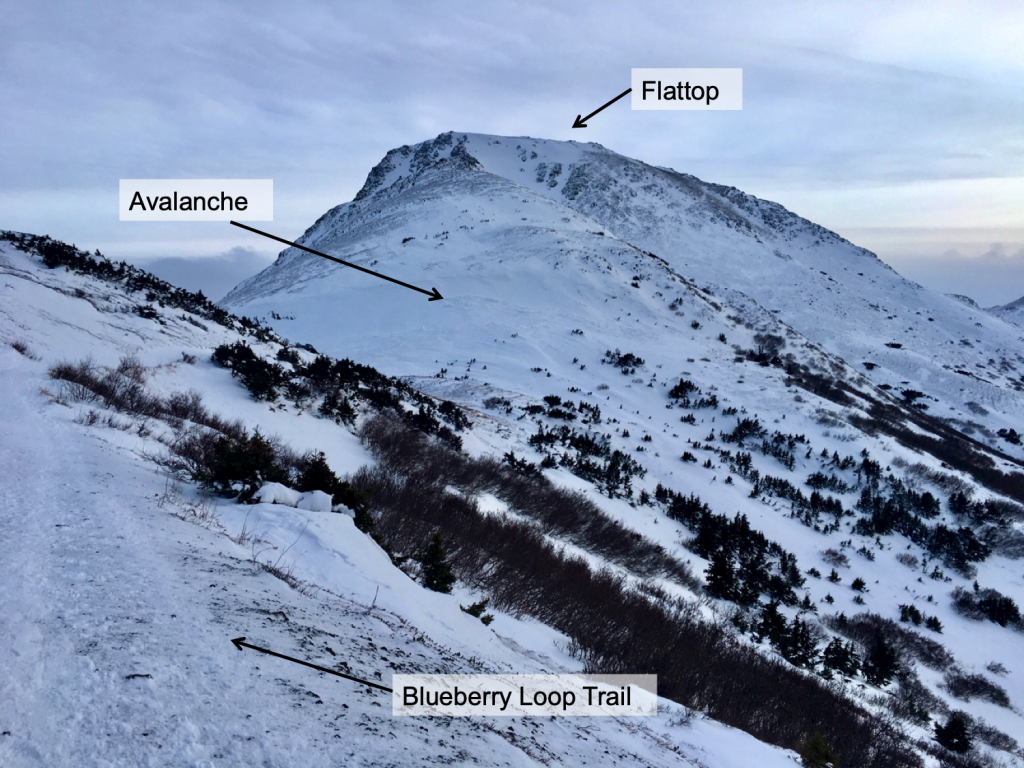 Wide view of Flattop and the avalanche from the Blueberry Loop Trail. 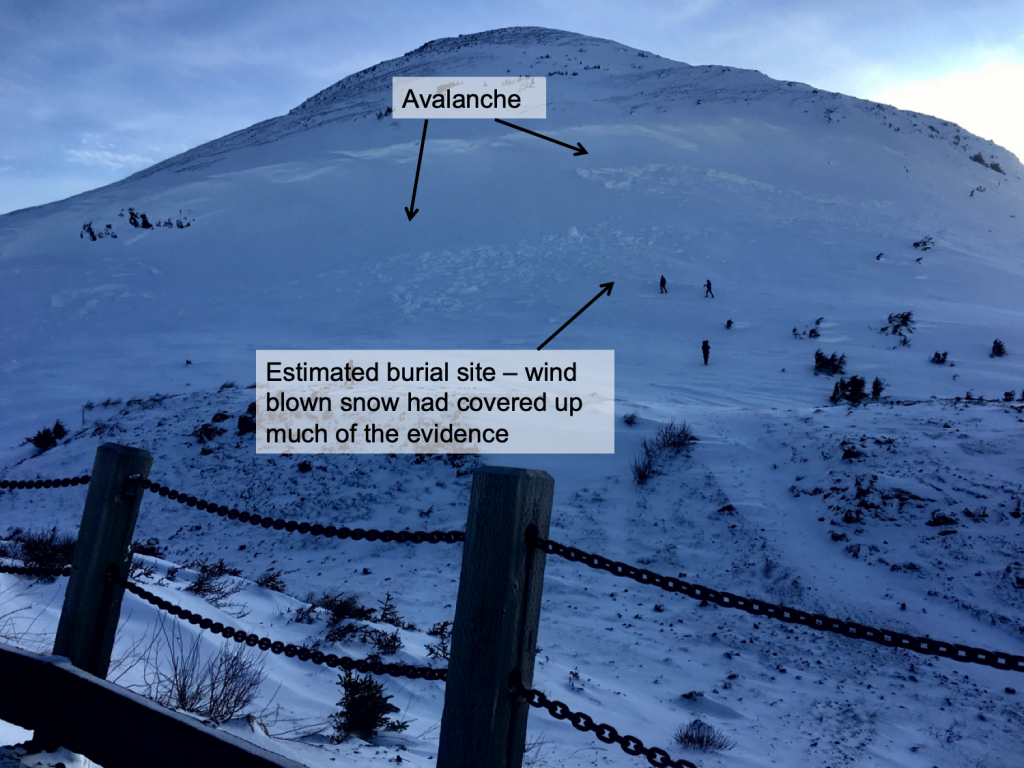 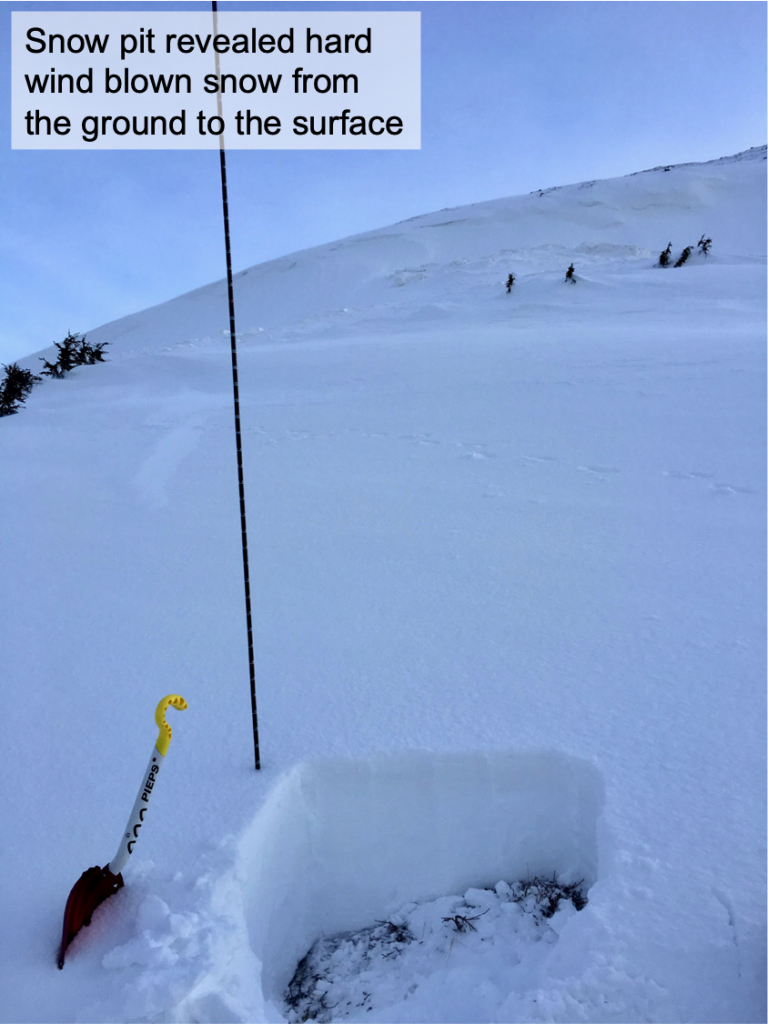 Snow pit revealed a series of hard wind blown snow layers that were bonded well together. 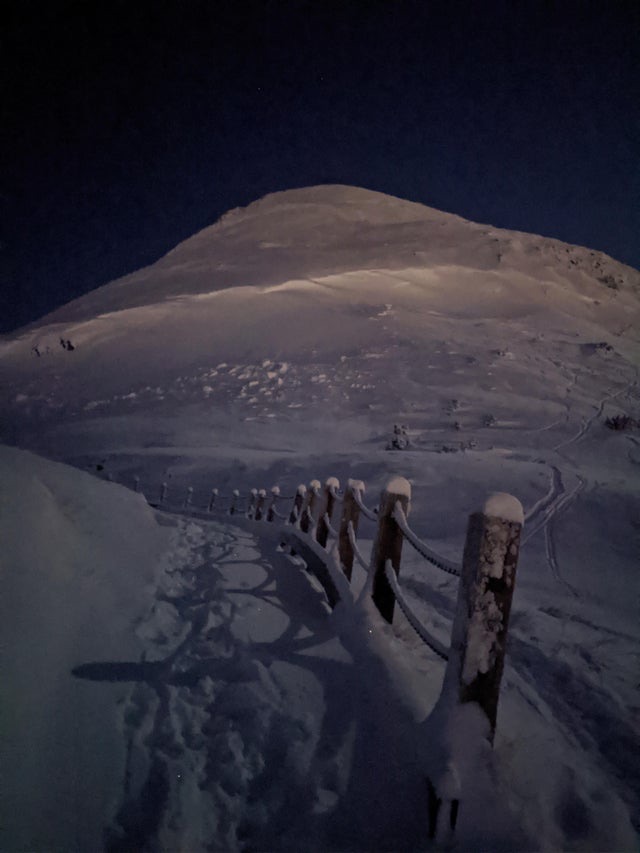 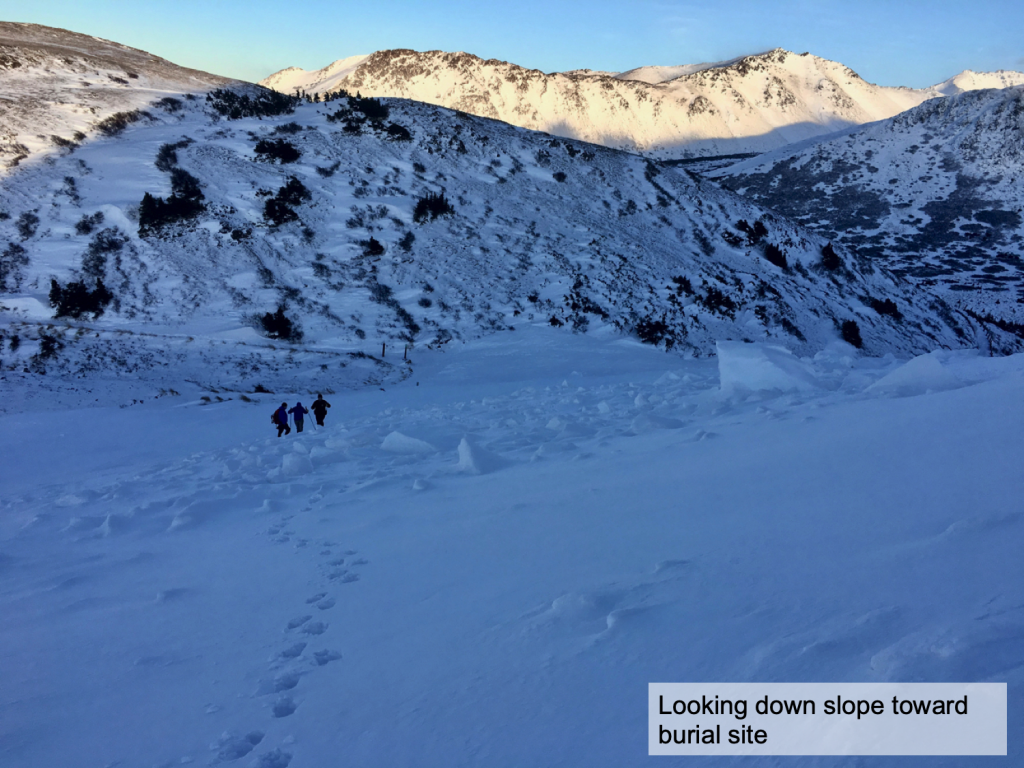 Looking down over the debris from near the top of slope. 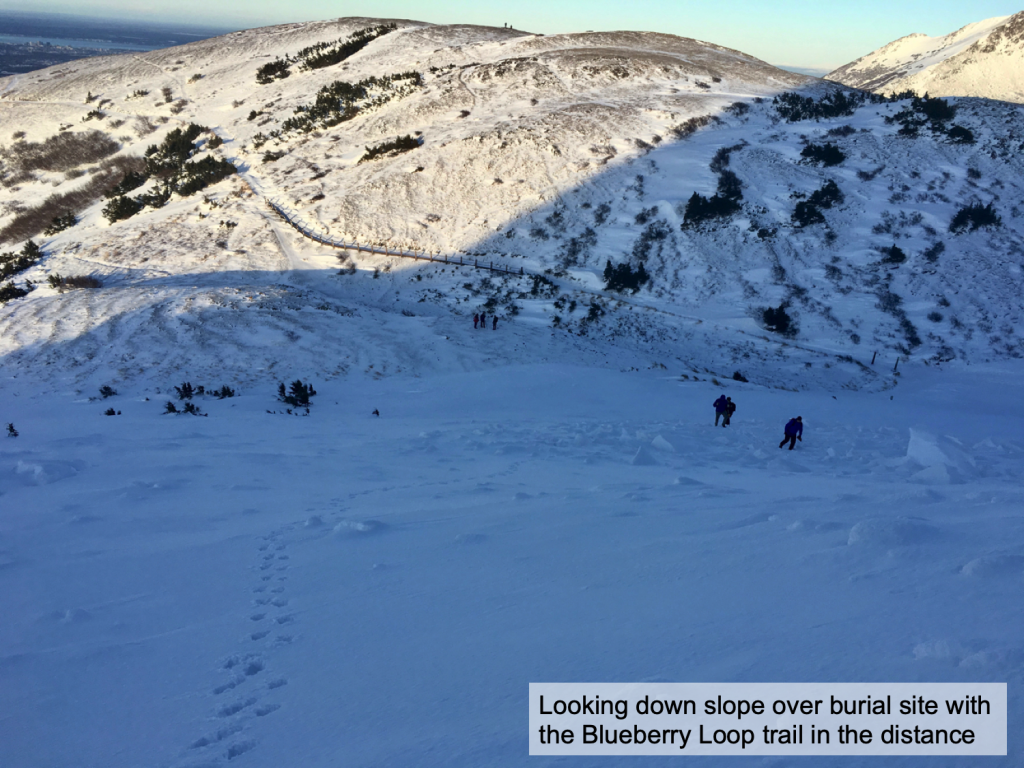 Looking down over the debris with the Blueberry Loop Trail. 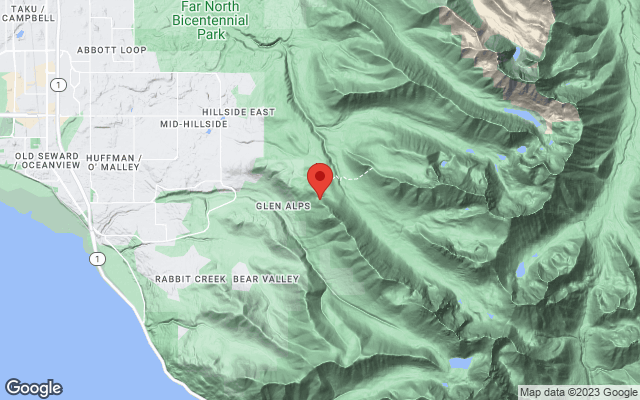