Eddie’s – starting at 10 AM from the lower parking lot, reaching up to 2500′ three times, and
returning to the parking lot at 4 PM.

Clear skies without wind at 10 AM; a high bank of clouds moved in throughout the day, ending
with most of the sky covered. Winds were calm throughout the day at Eddie’s, though at 4 PM a
large amount of snow was being transported by ~East winds from peaks across the arm near
Portage. 18f at 1:30 PM at 1500′.

At 2000′ on a steep (~40 degree), NW facing rollover, an ~75′ fracture wrapped around the top
of the rollover where a small wind slab had formed, releasing a soft slab ranging from 4-8″
thick, approximately 2-3′ in length, along the entire fracture. This slab ran down to the base of
the rollover, pushing loose snow. A photo is included below.

Cornices remain over SW aspects, as were present last weekend.

Other than the 2000′ rollover described above, no cracking, whoomphing, or avalanche activity
observed.

At the top of the 2500′ Eddie’s ‘bowl,’ a quick pit was dug on a flat, exposed area to find the
late-January melt-freeze crust. The layer was found 60cm below the surface, failing a simple
compression test under hard pressure (26 taps), with a Q2, resistant planar fracture. The
snowpack was deeper than 230cm at this location.

Fracture and resulting micro soft slab at 2000', as mentioned above. 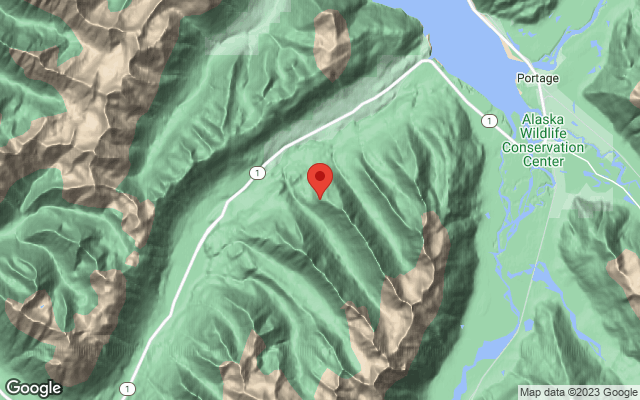