Route:
Eddies, starting at the lower lot and heading up to the top of the northwest facing bowl (~2300’), along the usual West to Northwest facing skin track.

Weather:
Temps from 10-20f, partly clouds, calm except for light winds from the East at the top of the route.

~14” of new snow, bonding well with the layer directly below. 80cm total snowpack observed at alderline (1200’). The depth of the new snow seemed consistent to the top of the route, with no obvious wind effect during the last storm up to 2300’. However, our skis were able to find rocks on steeper rollovers in the NW facing bowl on the way down.

Collapsing at the trailhead swamp shook alders – 100’ away – causing them to lose snow and stand back up! However, no other collapsing was observed during the day.

Cracking (~8 feet long) observed on a small test slope within the trees, at ~1000’ in elevation. No cracking was observed above the alders.

No observed avalanche activity on Eddie’s, or on neighboring slopes.

At the lower pit, located on a NW, 30-degree slope just above the alders at 1200’, total snow depth was 80cm. 60 cm of fist to four-finger hardness snow rested on top of a crust, with large facets below. No noticeable crust or hardness change separated the new snow from the old snow in the top 60cm, but the crust 60cm down was thick, and of pencil hardness.

Two compression tests at this 1200’ pit location failed in a sudden collapse, 60 cm down, under medium pressure (11 to 20 taps from the elbow), failing on the pencil hard crust/four finger facet combination that made up the bottom 20cm of the snowpack. An extended column test yielded a similar result, without propagation.

At the upper pit – located on a NW, 20-degree slope at 2300’ – total snow depth was also 80cm, with
approximately 36cm of new snow from the past storm. Unlike the lower pit, there was a distinct hardness change from fist to four-finger at the new/old snow interface, 36cm from the top. Additionally, the crust 60cm down from the top was not as thick or hard; it was 1-finger hardness as opposed to pencil.

Two basic compression tests saw failures at the crust 60cm down, in a sudden collapse, again under
medium pressure. Some surface hoar was seen above this crust. In addition, the new snow/old snow
interface – 36cm down from the surface – failed in a resistant planar fracture under medium pressure as well.

Unlike the lower pit, the extended column test at the upper pit location propagated, 60 cm down at the crust layer, in a sudden collapse under medium pressure. 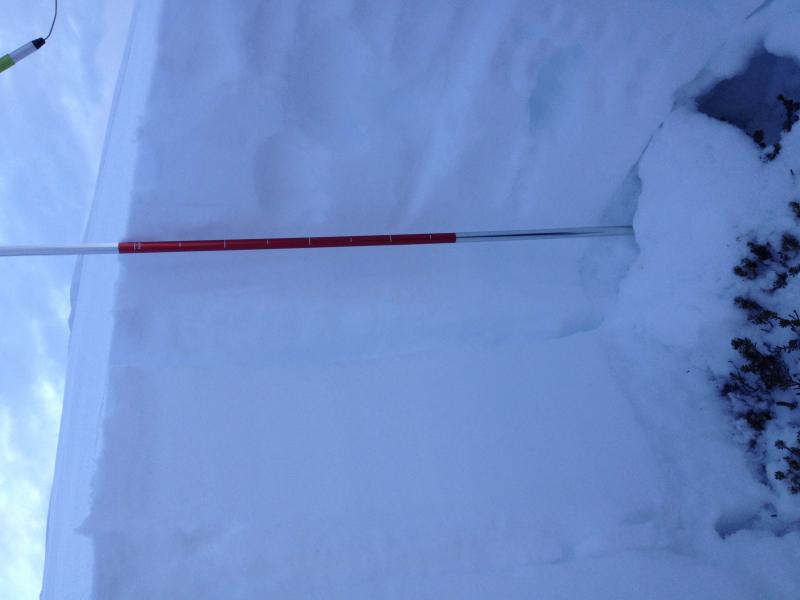 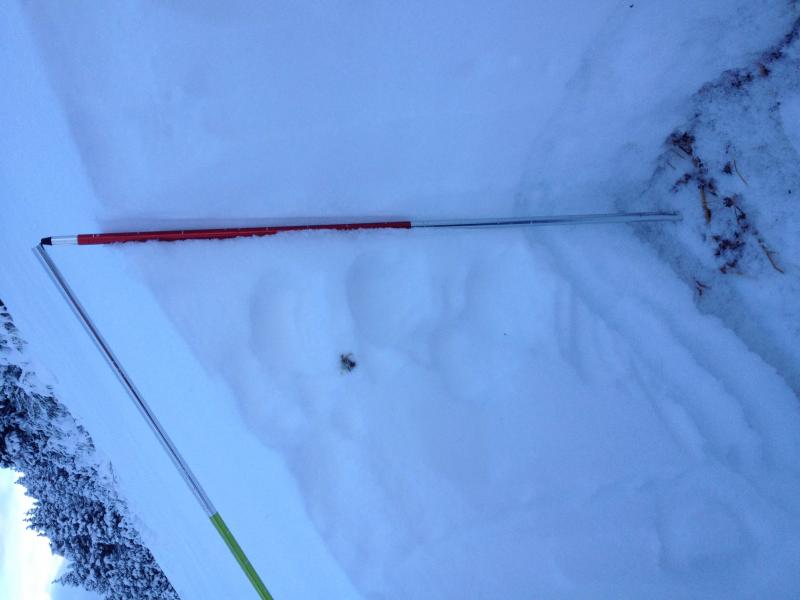 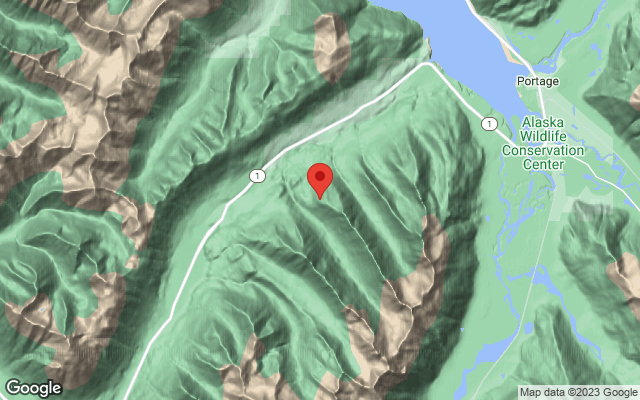