While we weren't certain that we saw fresh crowns on neighboring peaks, we suspected a few small ones on Wolverine when the light was good. Constant wind transport for the past 24 hours may have filled in crowns from overnight as well... We had one confirmed small windslab sighting on a southern aspect of Raggedtop near treeline in the Girdwood Valley on the drive home... and it was hard to pick it out even with good light!

Temps in the 20s - noticeably colder up high - with few clouds, and WINDY.
Above 1000' to our high point (2100') light winds occasionally gusting moderate from the Southwest.
Occasional light snow transport from these winds between 1000' and 2000'.
Ridgetop winds were producing moderate to short periods of intense snow transport throughout the day on neighboring ridges and peaks.

The outflow winds have done a number on the NW face of Eddies, with winds coming from the SW. Above alder line (~1100') the winds in the past 24 hours have scoured aspects facing more westerly, and deposited some slabs - 15+" thick in places - on the more northerly aspects of this generally NW face. These fresh windslabs would fail on isolation or under easy force in hasty hand shear tests. Cracking was fairly short - up to 5' long - for us on the route.

Looking above treeline across the valley on neighboring peaks, the 24+ hours of winds have certainly moved things around as pictured below.

We dug at a semi-sheltered location at 2050' - pit results and structure is below. While we had test failures in three layers at this location, the most notable was just above the thick melt freeze crust/melt form complex that was formed last weekend. Small facets failed 35cm down with a surprising amount of pop just above this crust, and while the ECT did not propagate the full length of the block before the block cracked, it did propagate most of the way across the extended column. In addition, a layer of 3-5mm buried surface hoar (covered the evening of the 11/24) was visible in the pit wall, 15cm down. It was surrounded by fist hard decomposing particles at this location. 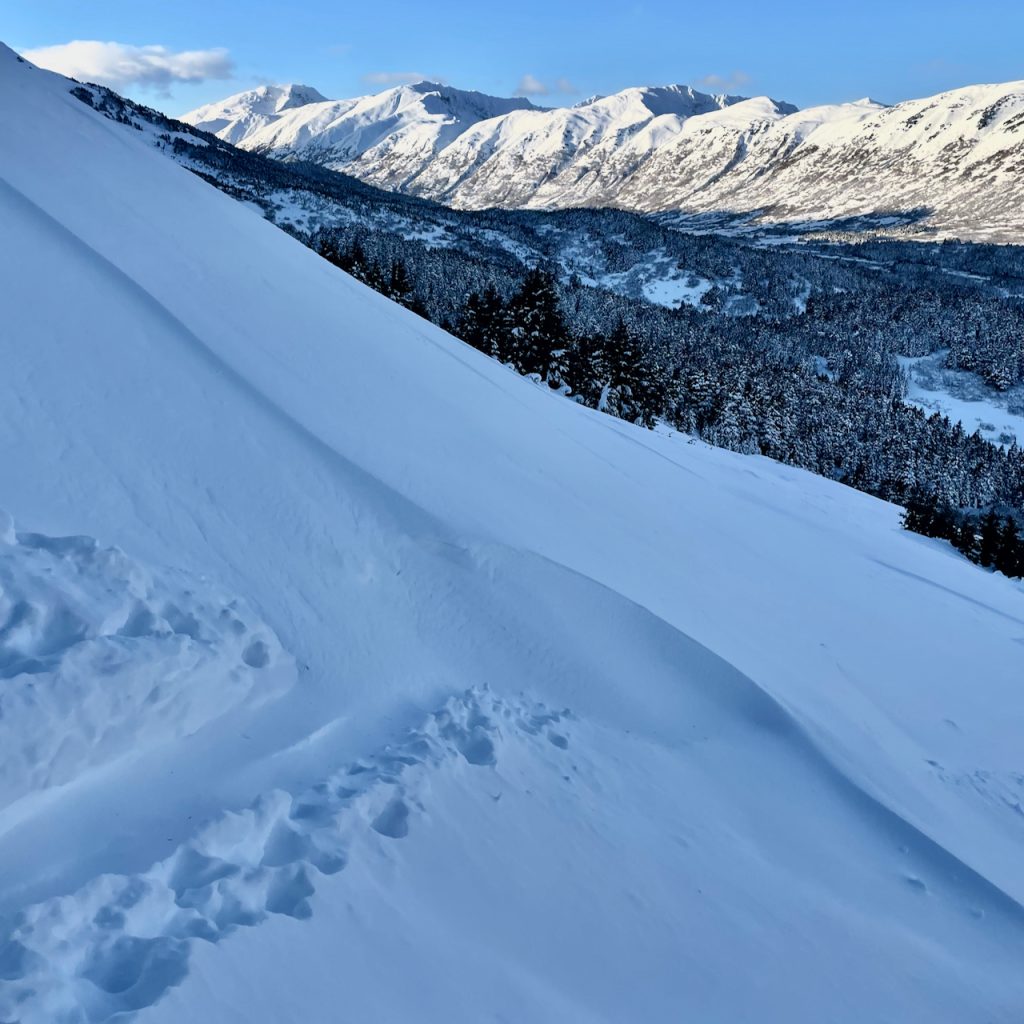 Wind transport from the last 24 hours covered up a prior skin track (and then some!) on this NNW aspect of Eddies at 1500', with a 15"+ thick slab. 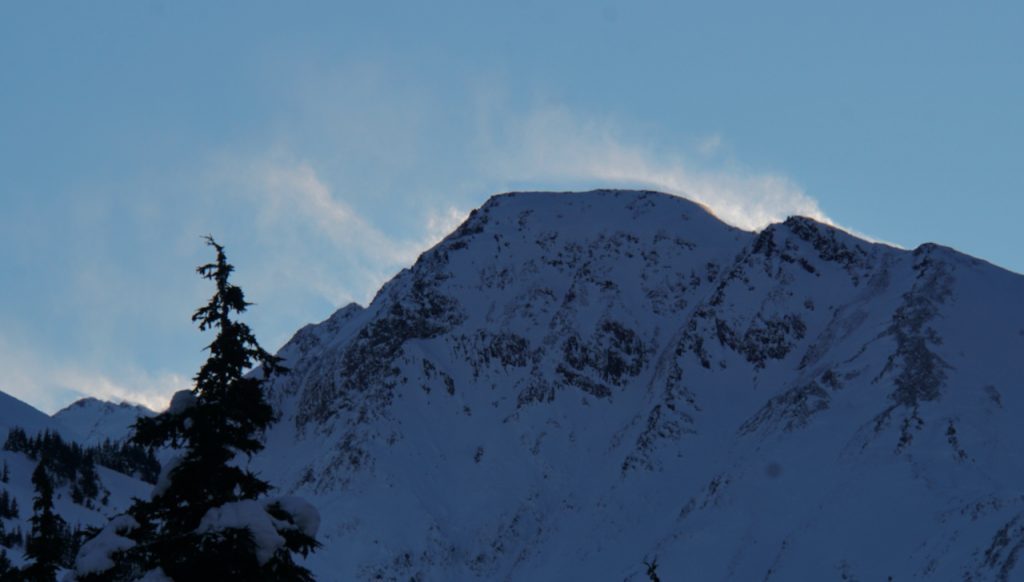 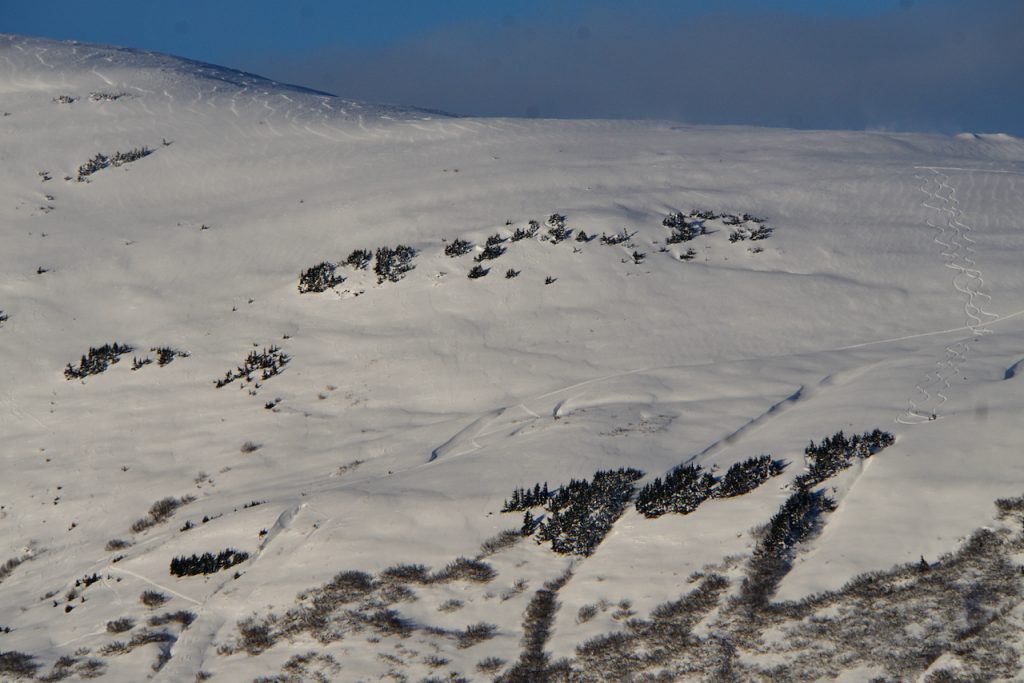 Wind effect could be seen even far in the distance, as shown here on the Seattle Ridge uptrack. 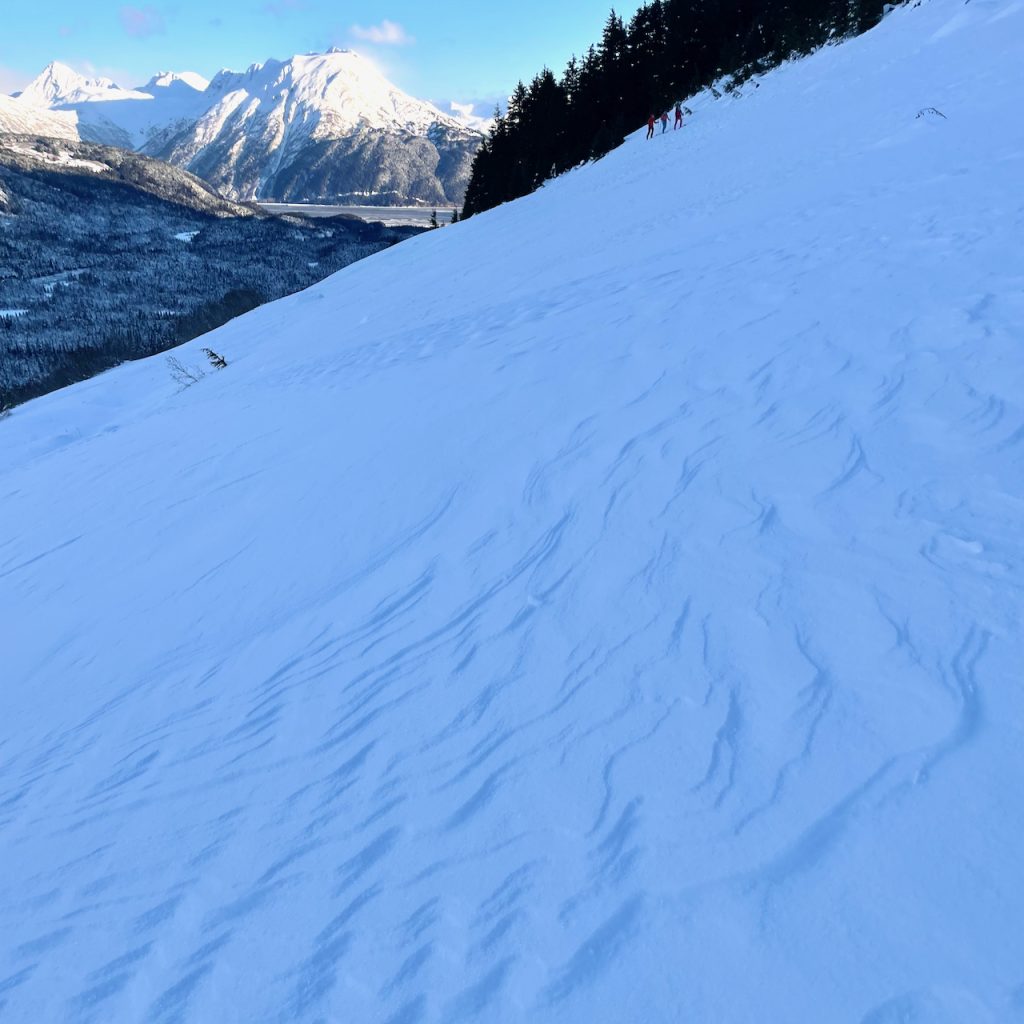 Surface texture just above the alders on Eddies. 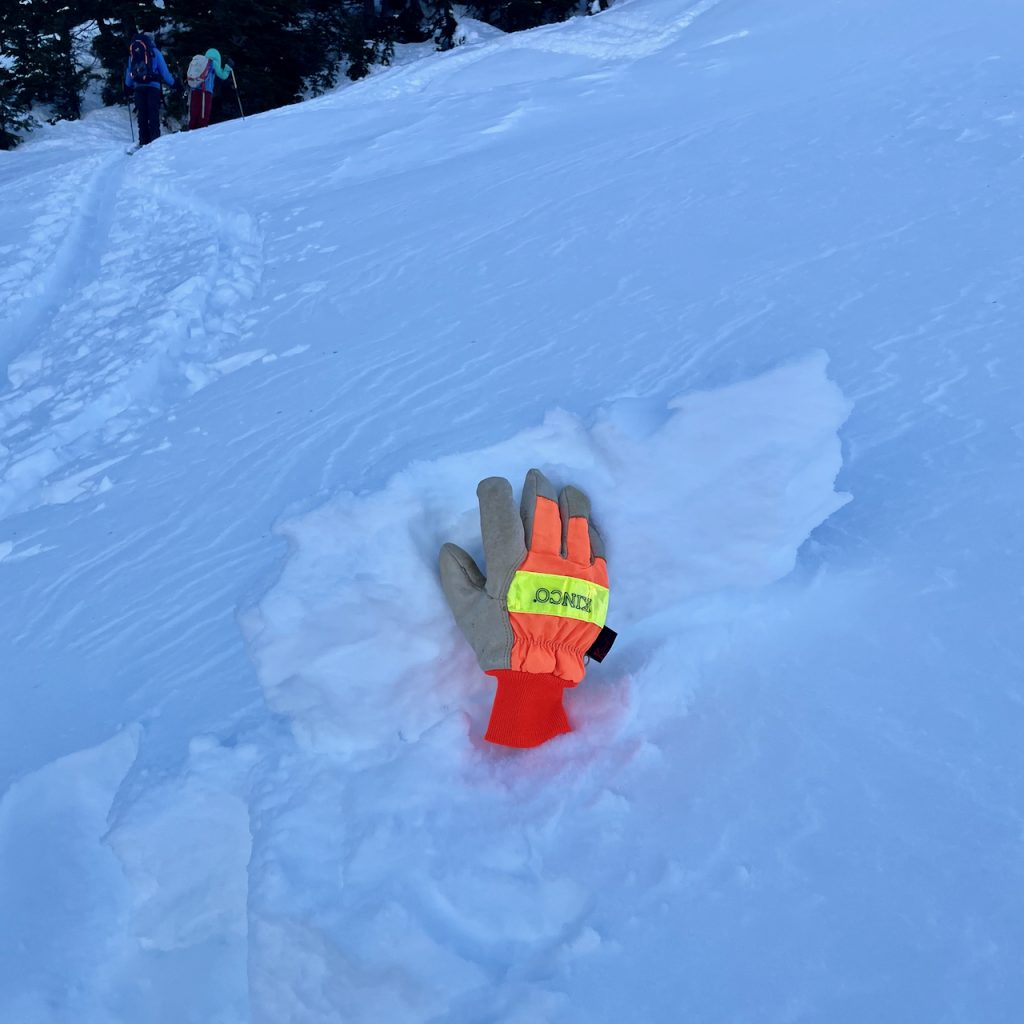 Hasty hand pits like this one would find the fresh windslab - ranging from a few inches to 15+ inches thick - failing either on isolation or with easy force. 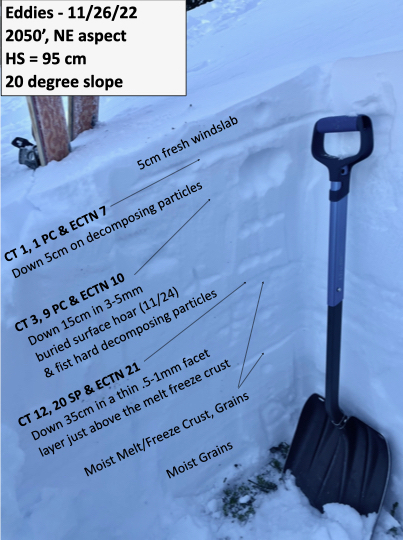 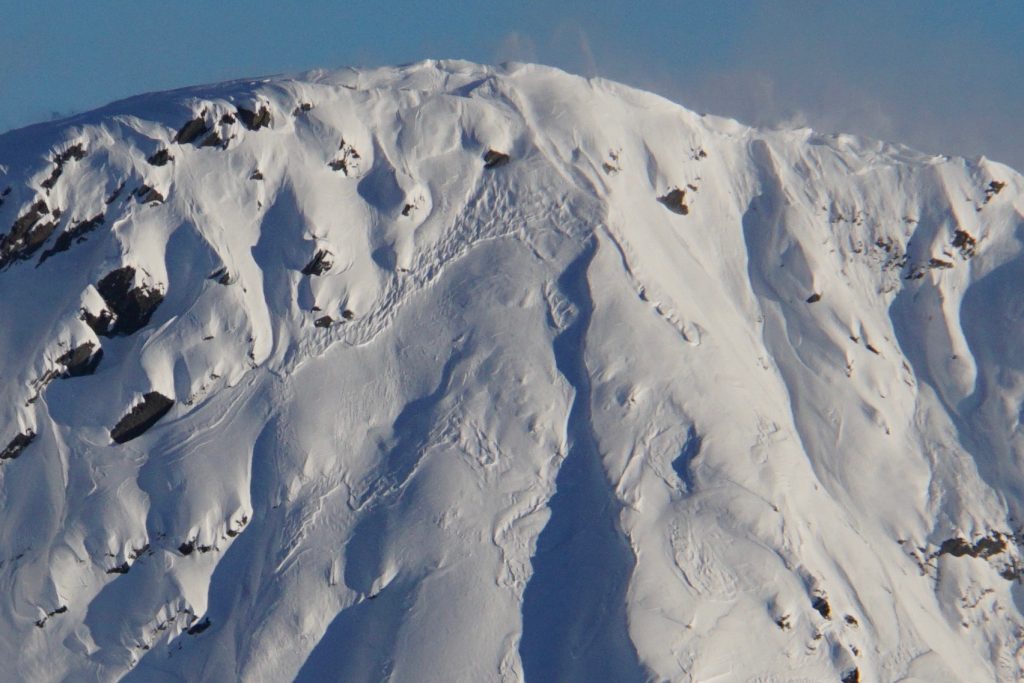 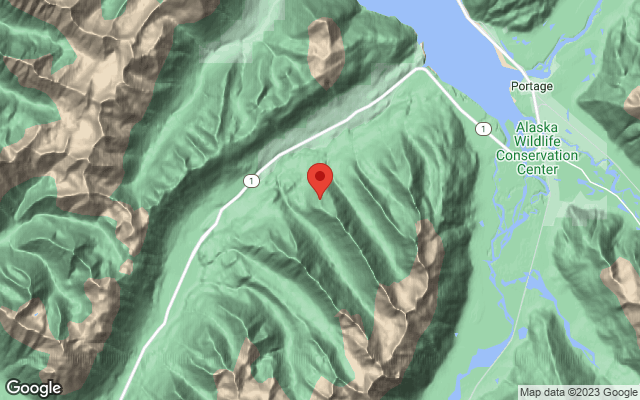