Location: East and South faces of Fresno to 2700'

Our group had a couple large whumphs around 2600' just before entering the alpine. Very poor snowpack structure was present throughout our tour.

Cool, calm, clear, and sunny in the morning. Temperatures warmed to the 20s F in the sun during the day. Light winds picked up through treeline and the alpine in the afternoon.

Snow surface was highly variable. Below treeline up into treeline varied from hard supportable wind slab at the top, to breakable wind crust, to soft sastrugi, and even loose facets. Some areas had been scoured down to the decomposing Feb 13-15th rain crust. Into the alpine the surface varied from loose facets to wind slab ranging from knife hard to just a thin skin. Sun crust was present on steeper (35+ degree) South facing slopes. The snow surface was not showing any signs of sun effect while we were out.

The Feb 13-15th rain crust that is present mid snowpack has deteriorated to the point where it is no longer supportable. It has gotten very thin and nearly gone by ~1500'.

We dug our first snowpits at ~2600' after triggering several large whoomphs.

Pit 1: 2550', SE Aspect, 23 degree slope, HS:80cm
Found the Feb 9th buried surface hoar ~15cm down from the surface. The surface hoar was unreactive and beginning to facet. The bottom of the snowpack is still large rotten grains of depth hoar. Test yielded failures on a layer of near surface facets (2mm in size) just below the buried surface hoar and on the depth hoar (3-5mm in size) at the base of the snowpack.
Results on near surface facets were CT10,CT7, and ECTP11. Results on the depth hoar were CT15, CT18, and ECTN

Our next pits were dug just a little further uphill, but into the alpine where there were more substantial wind slabs.

Pit 3: 2750', S Aspect, 28 degree slope, HS:130cm
Found alternating layers of old wind slab and facets. This makes a lot of sense with the weather history in the area alternating between snowfall, temperature fluctuations, and high winds. Tests yielded failures at wind slab facet interfaces within the top half of the snowpack.
From the top of the snowpack working down results were CTV, ECTP1. CT14, ECTN18. CT23, ECTP24.

Pit 4: 2700', SE Aspect, 22 degree slope, HS:115cm
The snow depth in the area around the pit ranged from 180cm down to 70cm. The surface in this pit was a ~20cm thick knife hard wind slab sitting over 1F hard facets (1-2mm in size). This upside down set up resulted in repeated failures upon isolation. As in our snowpits at lower elevations the bottom of the snowpack was made up of large (3-5mm) depth hoar. Test results yielded failures at the wind slab facet interface 20cm down from the surface, at a layer of large facets (1-2mm in size) 40cm down from the surface, and in the depth hoar at the bottom of the snowpack.
Results at the wind slab facet interface were CTV (occurred in 3 separate column tests) and ECTPV. Results at the large facet layer of large facets were CT21 and ECTP28. Results in the depth hoar were CT23. 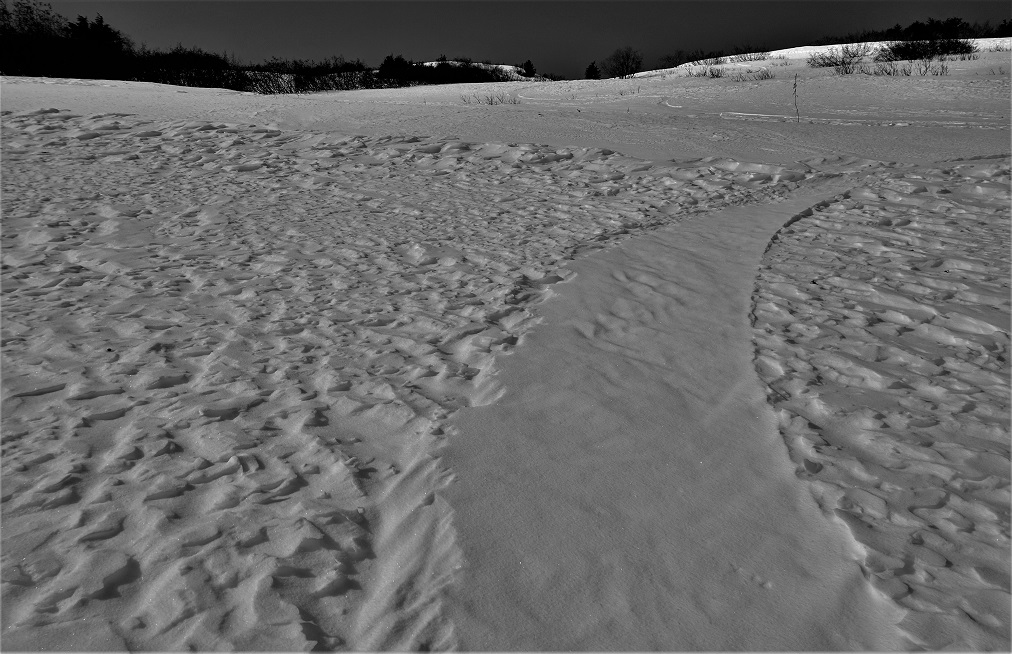 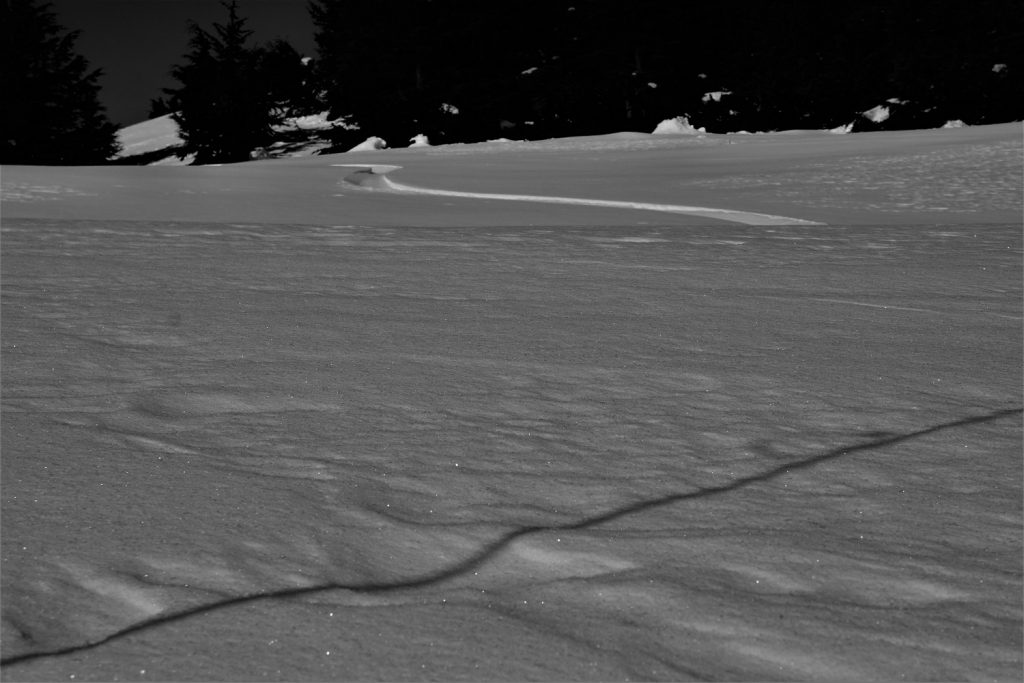 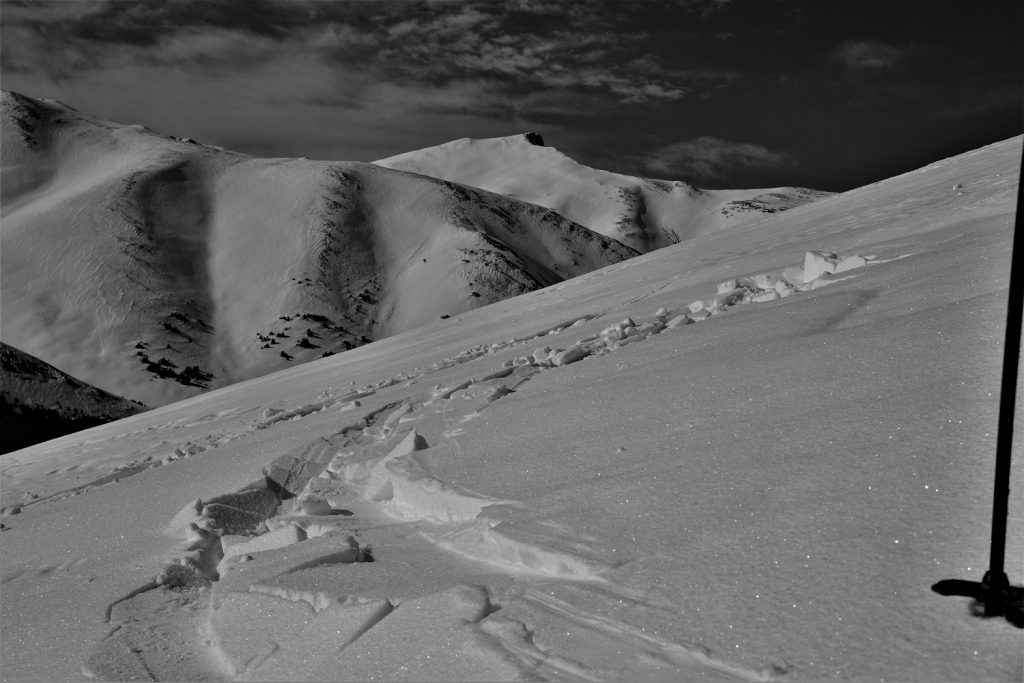 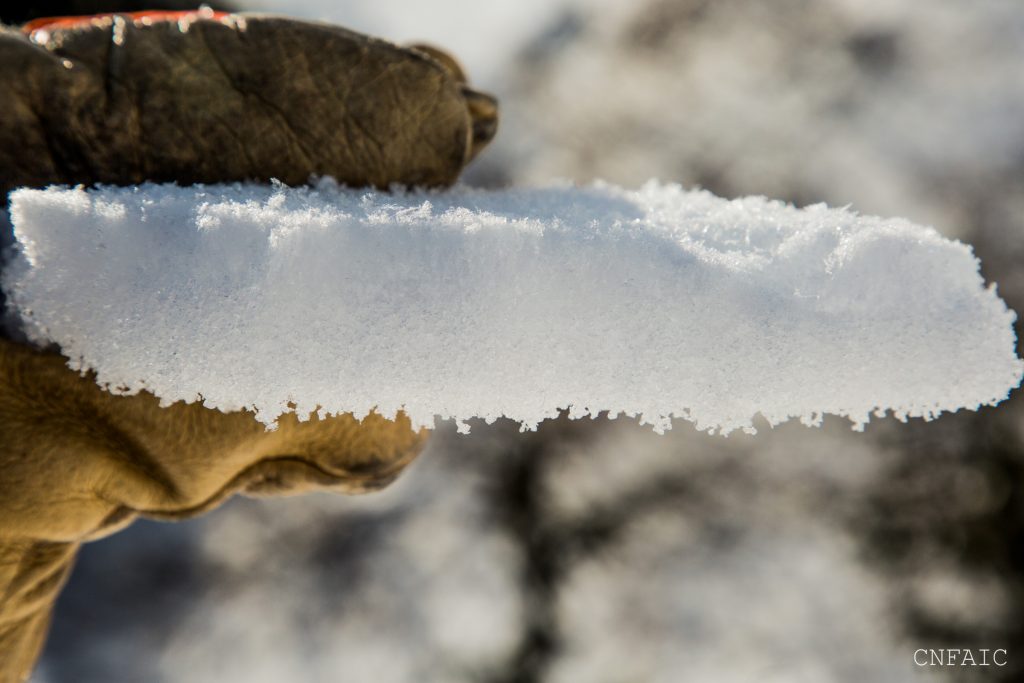 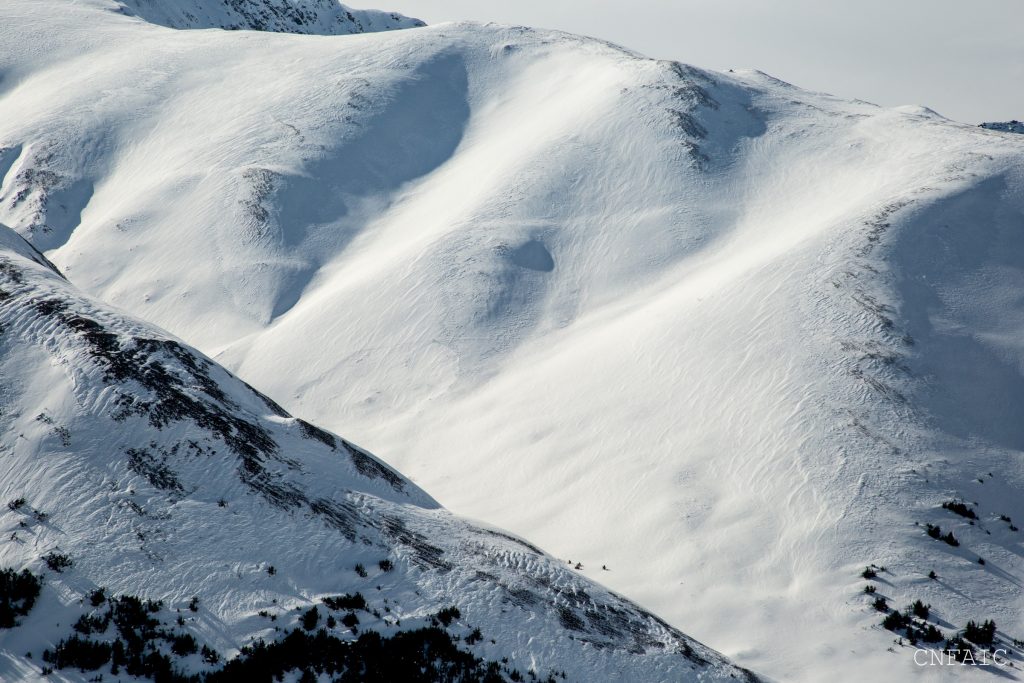 Wind texture and old avalanche debris on an adjacent mountain. 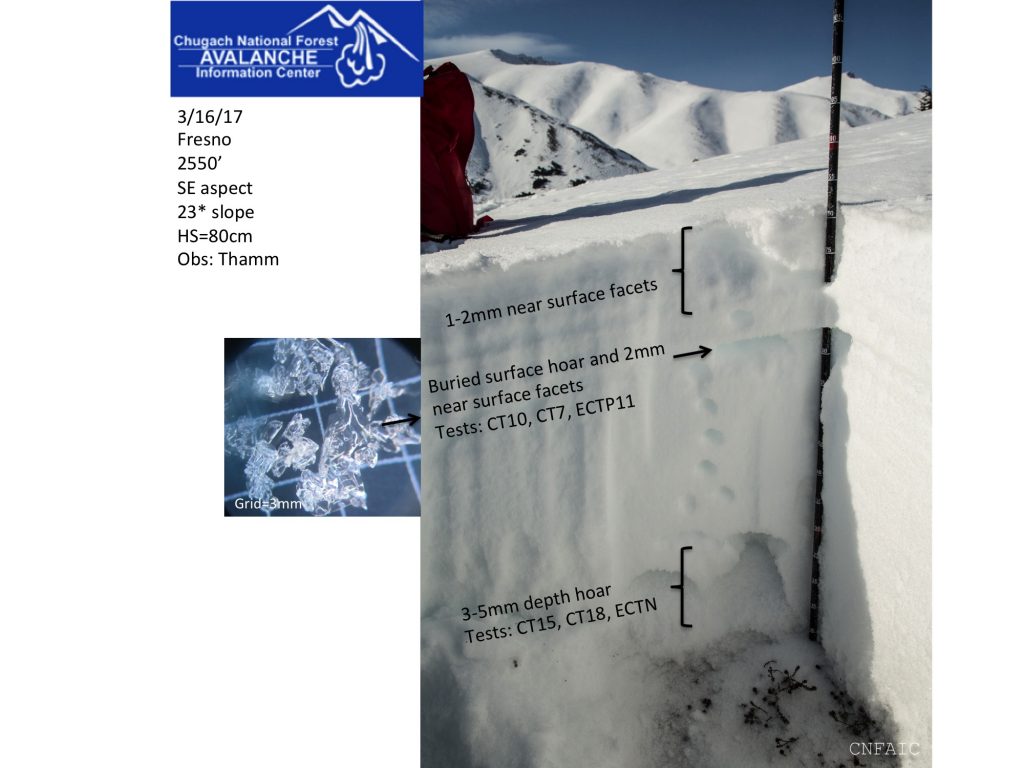 Profile and write up of Pit 1 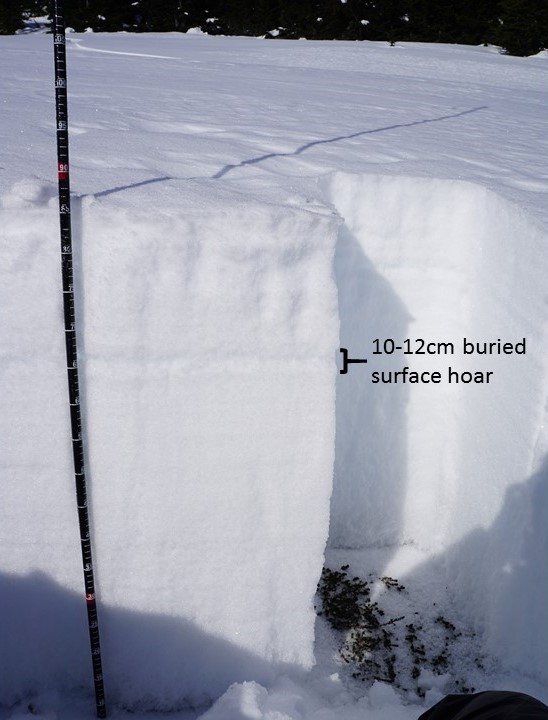 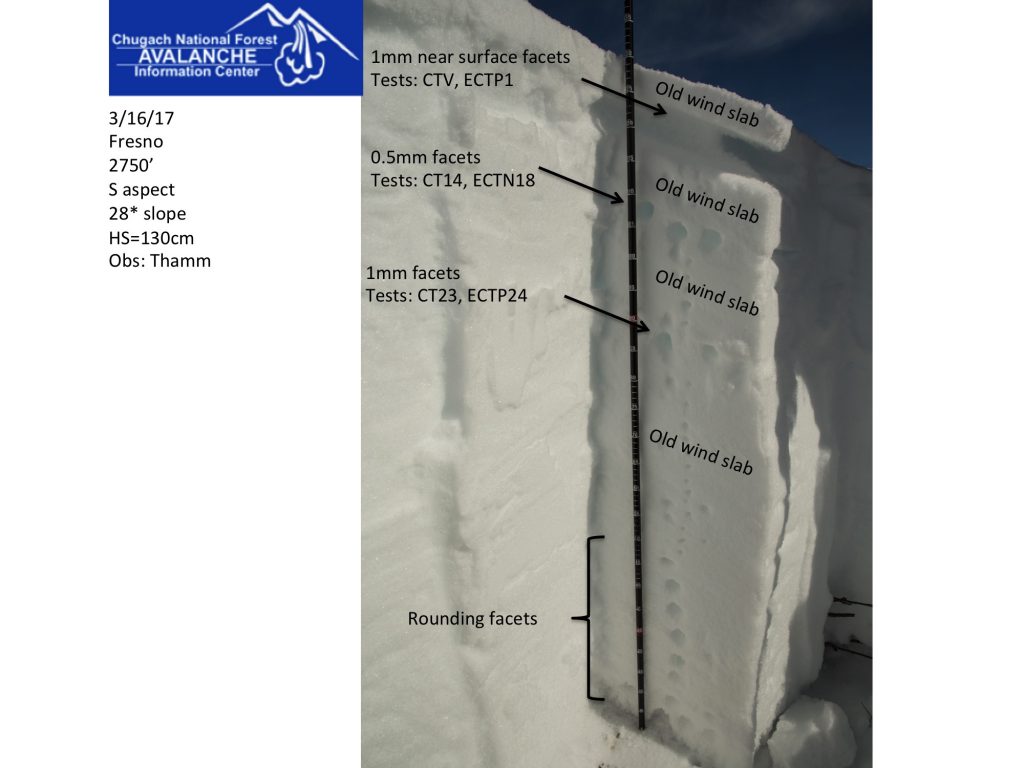 Profile and write up of Pit 3 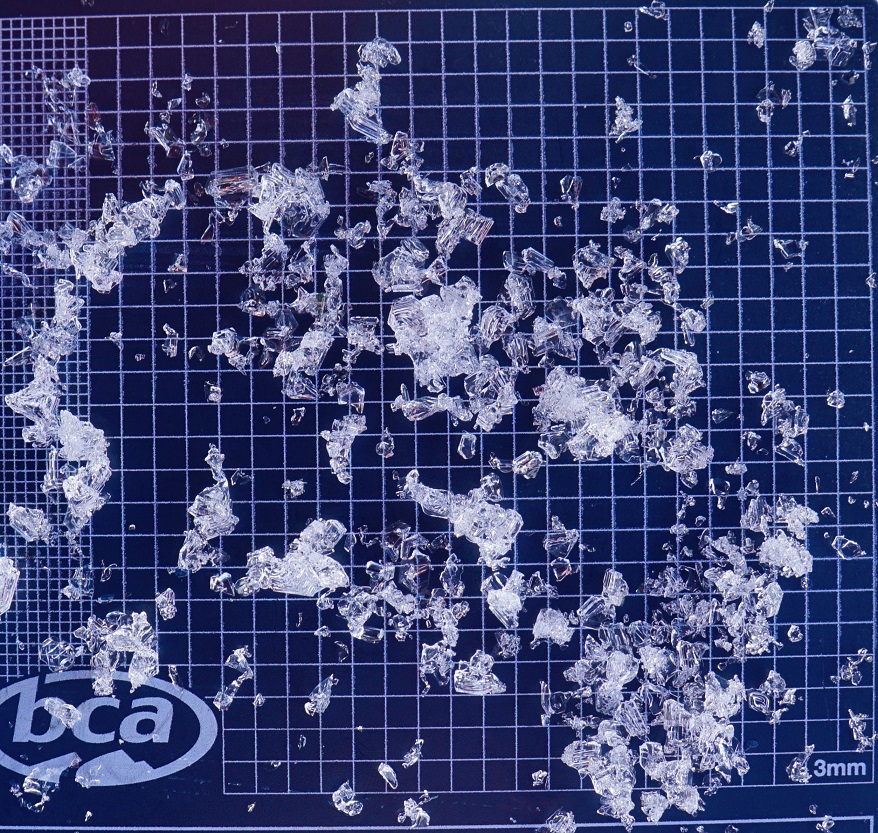 3-5mm depth hoar from the bottom of the snowpack 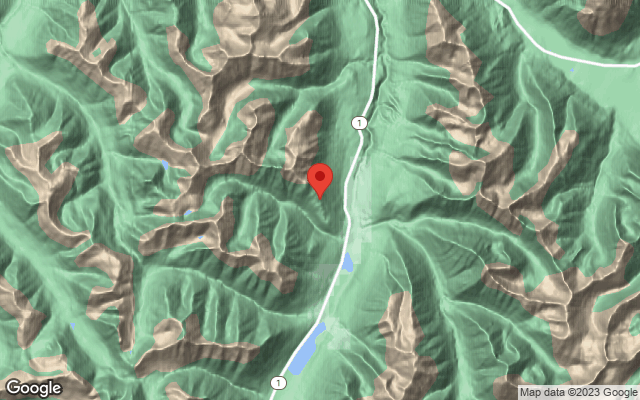