Just a few notes on ski conditions in the
Crow Pass area.

1. The Crow Pass area glaciers have changed dramatically from the sunny, hot,
and dry summer of 2013. Crevasses, randklufts, and bergschrunds have opened up
significantly – in addition to the formation of new crevasses small and large.

The crevasses on the Jewel and Milk Glaciers in the vicinity of popular early
season ski runs have opened up considerably, and there also seems to be many
more small, new crevasses. Specifically, a popular north facing snowfield run
from the ridge leading up to Goat Mtn down to the Milk Glacier seems to be so
heavily crevassed that this run is pretty much ruined (at least without
significant exposure). Crevasses close to the most popular Jewel glacier run
have grown quite large, creeping closer and closer to the popular skiing – with
some small, new cracks very close. In the past week or two the smaller cracks
have been pretty much filled in by snow with some of the larger cracks filled in
but still with obvious depressions – others remain open to some degree. Snow
bridges appear to be superficial and weak as of 10/23. The randkluft and
bergschrund in the Jewel glacier/Summit Mtn area has opened up dramatically
since last season.

2. There is a HUGE avalanche crown on a NW facing snowfield above the
Raven-Milk confluence below Goat Mtn’s northerly ridge. Estimated from a
distance to be D3.5, R4. This seems like it failed in older, dryer snow (from
perhaps over a month ago) that was overlain by heavier, wetter snow and more
recent dry snow with heavy wind deposit. The crown appeared to be hundreds, if
not well over a 1000, feet wide with an avg depth of a few feet. However, I
could not see the stauchwall and runout. It appears to be an anomaly.

3. Current conditions, as of Oct. 23, consist of very dry, low density powder
on top of a rain/melt freeze crust. In protected areas the dry power is several
inches deep and the scratchy crust below not noticeable while skiing. In other
areas the crust is only dusted over and the turns are icy.

4. Some faceting in this dry surface snow occurred during the brief clear and
cold from 10/22 pm – 10/24 am. Along with the icy crust it may provide a good
weak layer and bed surface for slides to occur on the new snow we’re likely to
get 10/24-25. 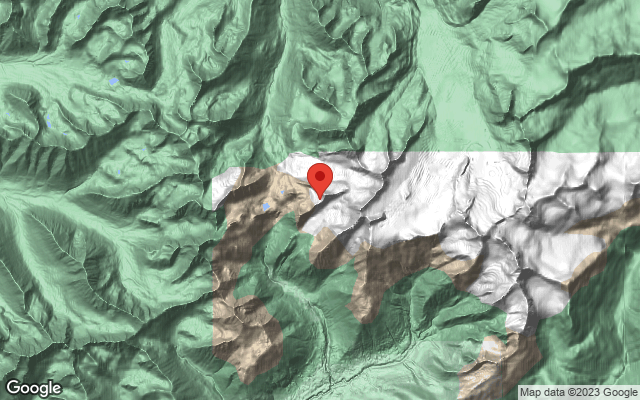