Light to moderate wind transport off peaks near Notch/Alyeska midday

One rogue ~4' diameter "rollerball" rolled down an east aspect at 2600' during obscured skies... no cornice overhead, and the best guess is that it was a tree bomb? But there weren't many in the area, nor were they generally that large!

Broken -> high overcasts skies in the AM, transitioning to overcast/obscured by valley fog in the afternoon.
Calm winds, though moderate wind transport seen back by notch/Alyeska mid-morning - see photo below.
Warm... above freezing at the road, and right around freezing at our high point of 2700'

2-3" of moist new snow present to our high point on an east aspect of 2700'. Surface snow was dry but on the edge of moist on a steep north aspect at 2400' on our descent mid-afternoon. The sun is definitely working East -> South -> West aspects these days, as evidenced by the series of melt freeze crusts found in our pits described further below, and recent wet loose avalanches observed starting at 3500' on Goat. The warm temperatures that made today's new snow moist may well leave a crust below 2000' for the days ahead, depending on overnight temps.

In a search for either the 3/2 or 3/16 buried surface hoar, we dug pits on E/SE aspects and N aspects near treeline, while also taking a look at the different structure in the top 12" of the snowpack - the entirety of new snow that has fallen here this March - on aspects that get direct sun versus shaded slopes. We found buried surface hoar 10cm deep in the north aspect snowpits only... this layer was buried on 3/16.

The 3/2 interface - 25cm deep - was visible in pit walls, but only decomposing snow grains could be seen at this layer. That said, the 3/2 buried surface hoar isn't showing up consistently in all pits region wide, including on Turnagain Pass... just this week, some observations have found it upright and intact, while other observers haven't seen it at all. So the absence of it in these two specific pits doesn't mean it doesn't exist elsewhere in the Girdwood valley.

No propagation in stability test results. 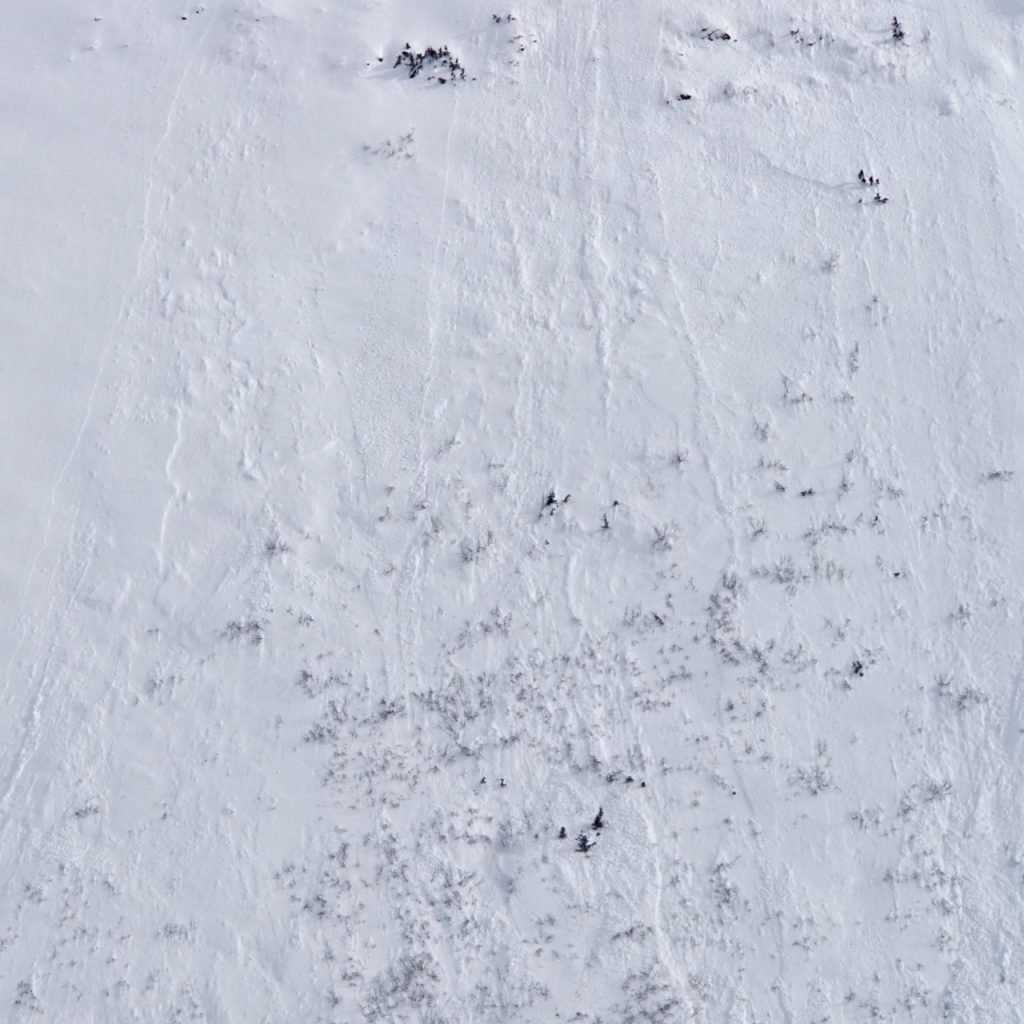 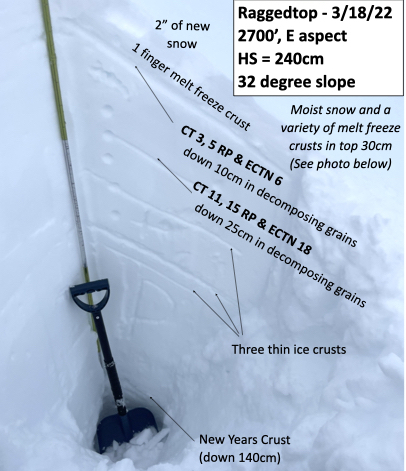 Test results and structure on an East aspect. The next photo shows the complexity of the moist melt freeze crusts in the top foot of the snowpack, which aren't depicted well in this overview photo. 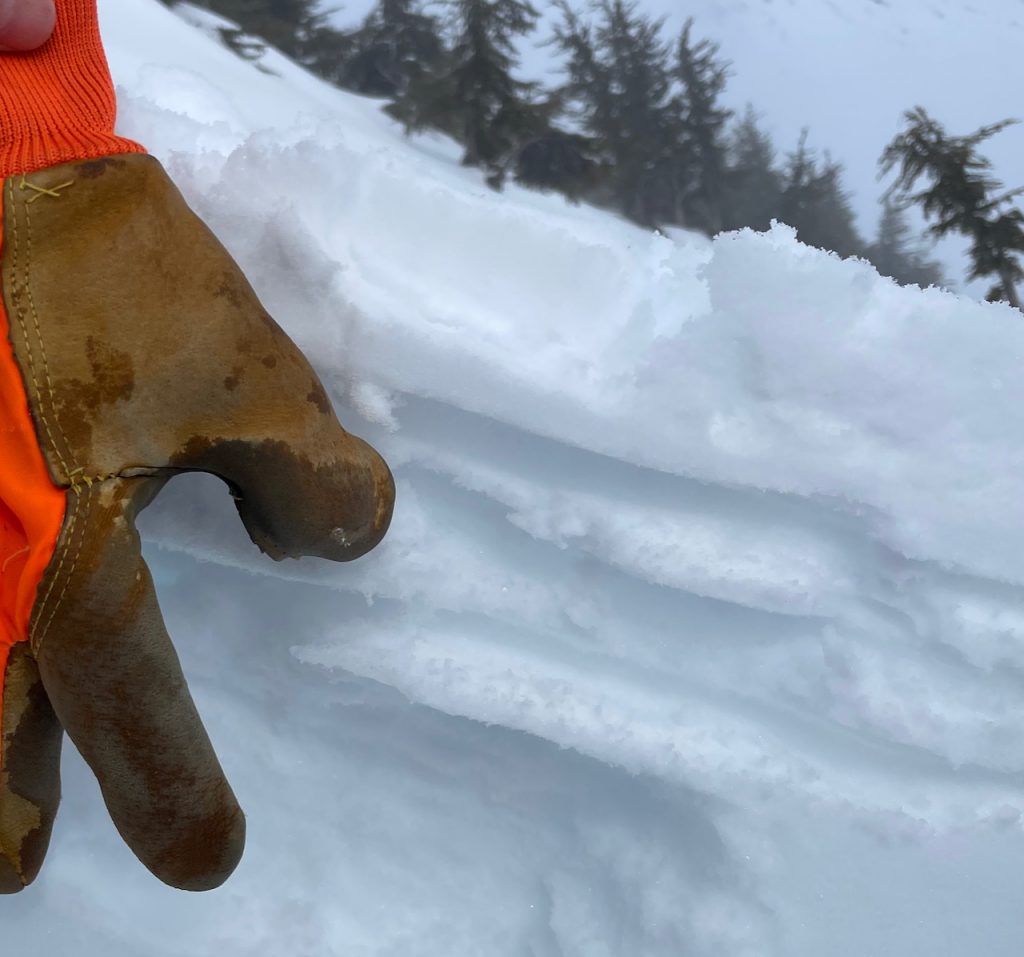 6cm of new, moist soft snow sat on a series of melt freeze crusts - 4 in this photo - at the East aspect pit above. The top two are thicker melt freeze crusts, while the lower two are much thinner. These crusts were not present in the lower elevation north pits below. 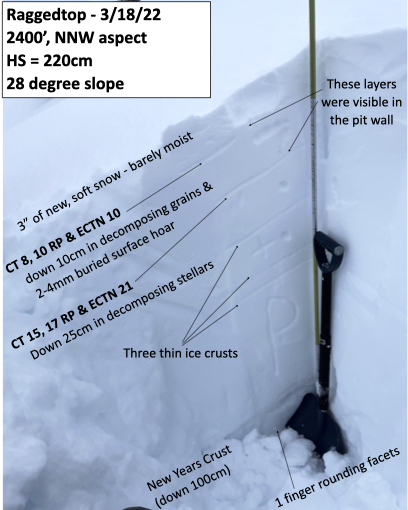 Test results and structure at our lower elevation, northerly pit location. While the two upper layers that had stability test results were visible to the naked eye in the pit wall, only the top one had buried surface hoar. 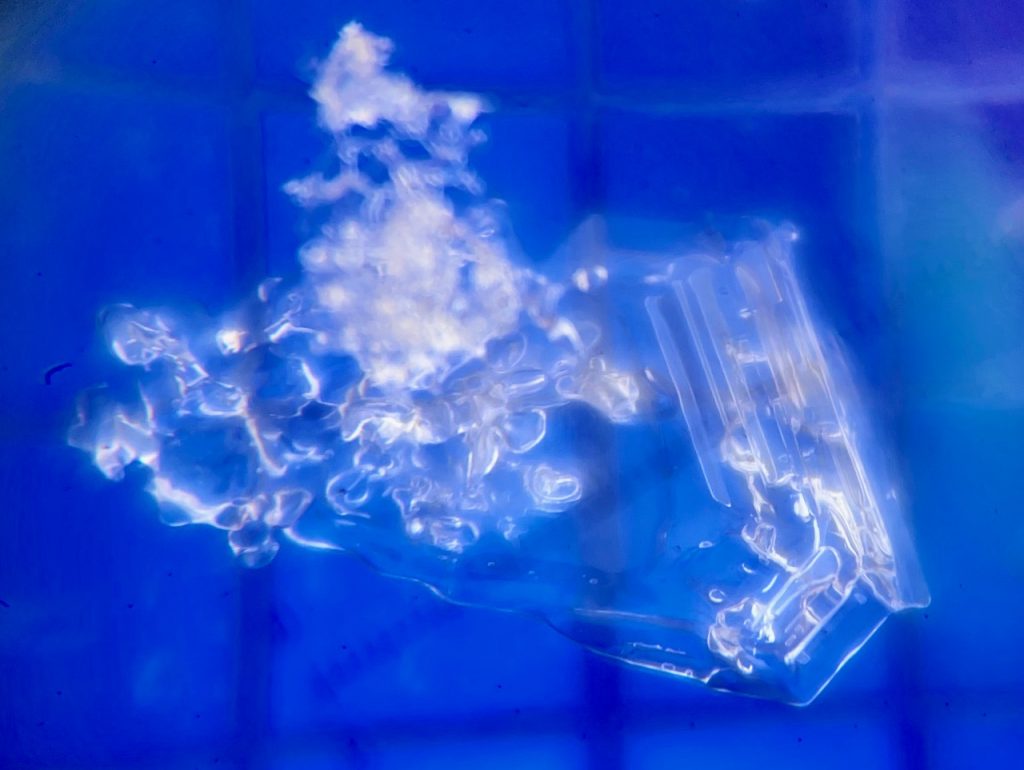 A grain of the 3/16 buried surface hoar, on a 2mm grid. This layer was 10cm down, covered by snow on 3/16. Buried surface hoar wasn't the predominant grain type in this layer - there was more decomposing new snow present at the interface than grains like the one pictured above. 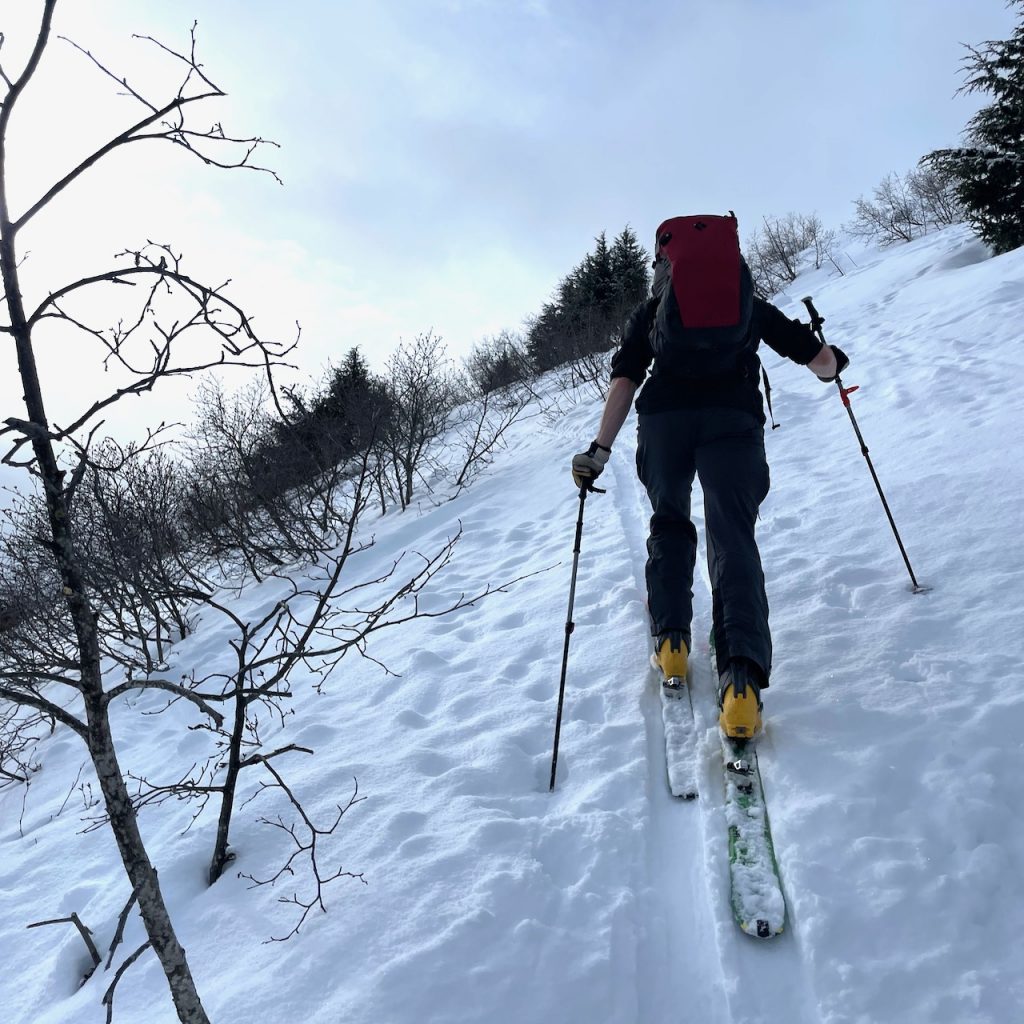 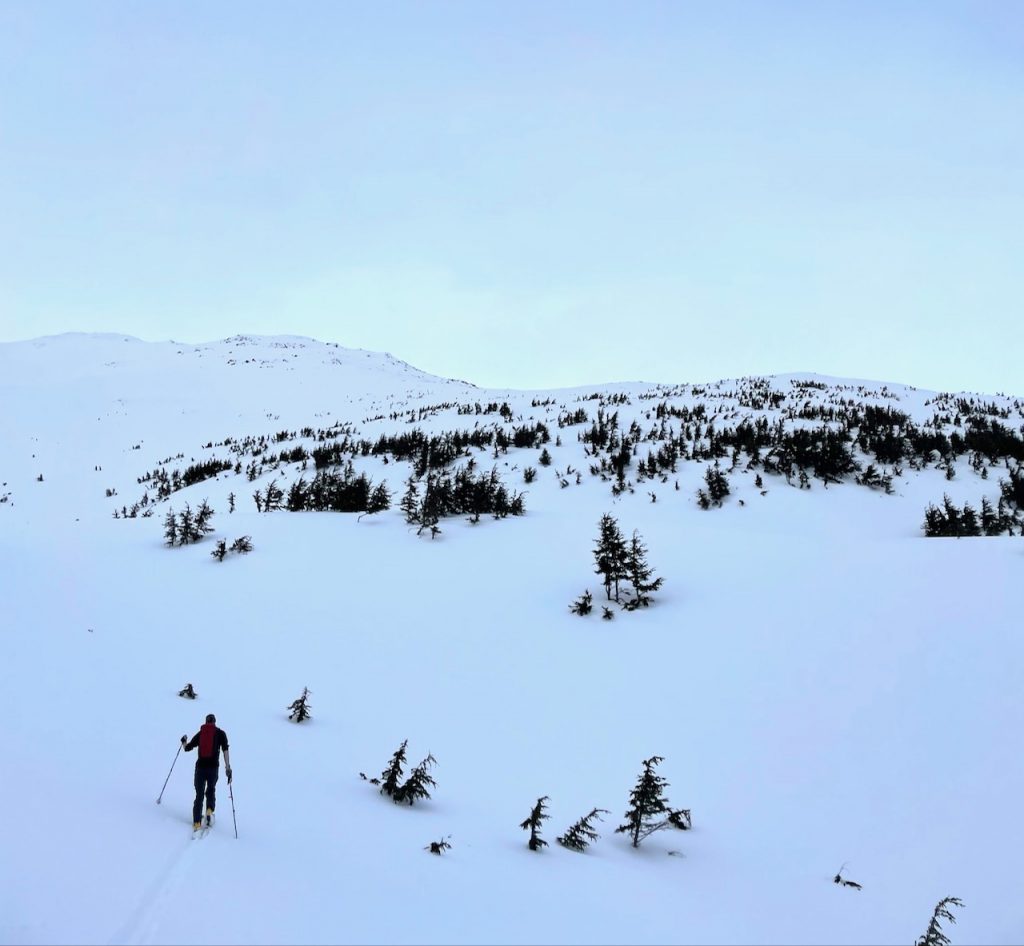 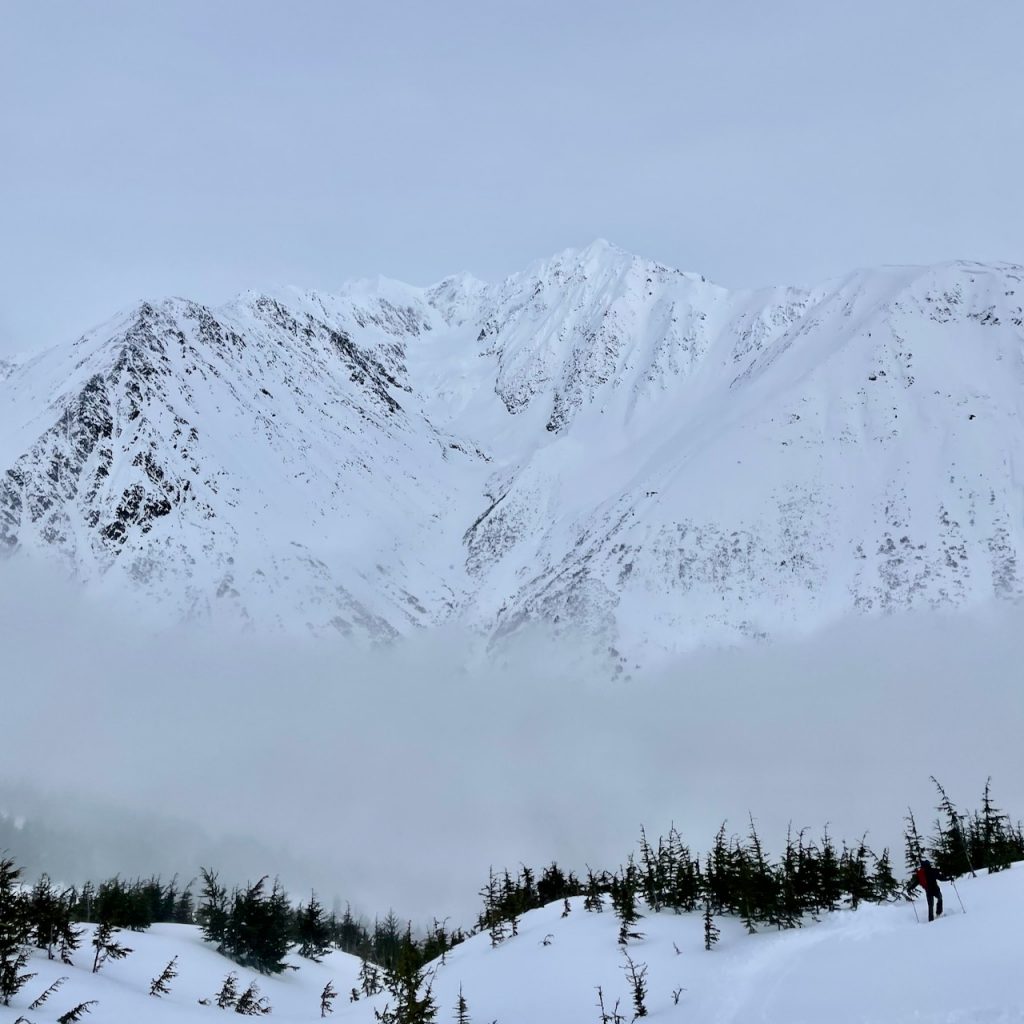 By mid afternoon - valley fog rolled in, occasionally obscuring the sky up to treeline. 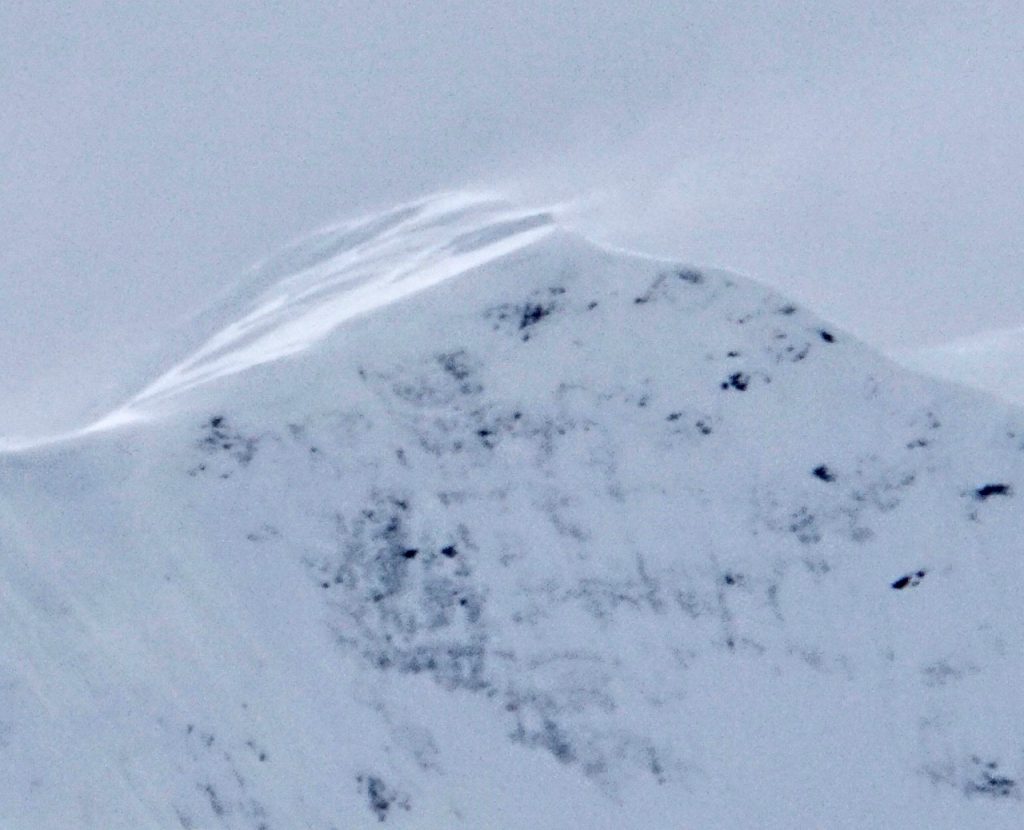 Midday some light to moderate snow transport was seen off peaks near Notch. 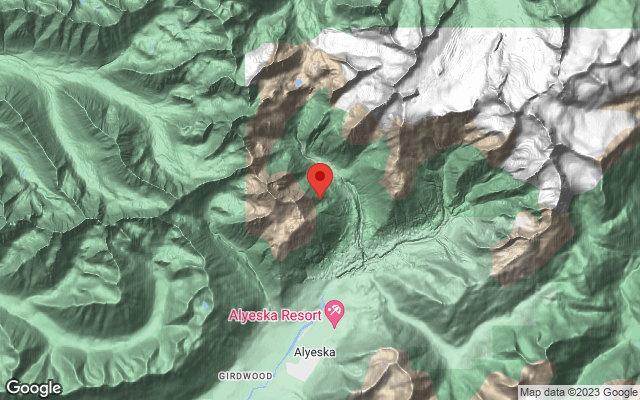