Account of hikers threatened by avalanche on their way to see the ice caves. Thank you to Shiloh Powell for sharing her story and photos. We are very glad all in the area were ok and out of the path. Note: the debris did not run over their turnaround location but the powder blast came close.

"Today was the day we outran an avalanche. This has been officially crossed off our bucket list.
No- seriously. This happened today!
We set out on an adventure back to Byron Glacier to check out the ice caves. The weather was not ideal and was worsening by the minute. We decided to give it a go anyway knowing we could always turn around if it got too sketchy. We are both pretty savvy and careful. Onward we went.
So we parked the car, got our gear on and set out hiking.
It was wet and windy and a little chilly. Probably 38 degrees or so with some spots of sun pushing through the overcast. We hiked for a while and encountered several other hikers who were grinning ear to ear saying how beautiful the caves were.
We were around 3/4 way to the caves and stoked- feeling like we were totally gonna make it. We pressed on.
Then I heard something. The hair on the back of my neck stood up and it stopped me in my tracks. I stopped and shouted "Shhh.. listen!"
Then I heard it..and in a second realized what it was.
It sounded like a freight train.
The sound was coming off the mountain directly above us. I looked up and saw a giant WALL of snow just below the cloud line and it was moving fast! It was like half of the mountain had broke free from itself and it was coming down the mountain- right at us.
I yelled at her then- in the most guttural tone I have ever heard come from my mouth.
"A V A L A N C H E!! RUN!!"

I scrambled..my eyes scanning the terrain ahead of us- I was moving as fast as I could through the treacherous footing of the snow and slush. There were person sized 'post holes' in the snow leading to gaping breaks in the terrain where the sun had warmed and eroded the snow pack and people had pushed through the snow before us. I did my best to avoid all of these leg breakers while running as fast as I could- glancing over my left shoulder to gauge the width and volume of the mass of snow that was bearing down on us. The snow was still coming, and it was getting wider, gaining more volume and moving faster. We were still running.
"KEEP RUNNING! KEEP GOING!"
I yelled back again. We kept running. We were moving toward higher ground in the rocks and scree that are just before the last stretch of trail before you drop in to the valley where the ice caves are.
We were gaining elevation quick and had covered several hundred yards by the time the mountain slowed and eventually stopped moving toward us. We finally came to a part in the rocks and I looked back, it was slowing down and that we might have made it to safety. (for the moment) We stopped then. We looked up at the mountain and it was still moving slightly... but the snow was settling. It was over.

It was the craziest- most incredible thing I have EVER seen. Absolutely terrifying and thrilling all at once.
There was a small group of hikers that were coming our direction from the ice caves and had seen the entire avalanche happen as we ran for our lives. One of the guys in that group says to me in an excited tone" "Did you capture it?"
I'm like.. "DID I CAPTURE IT? YOU MEAN LIKE VIDEO IT? NO!! I WAS RUNNING FOR MY LIFE!"
Did you not SEE us running away from the avalanche?
I had to laugh because the humor was just too much in that instant. My knees were absolutely shaking and I doubled over in relief.. just happy to be alive. I looked over and we took a look around at our surroundings. I looked up the mountain ahead of us, and could see another very fresh snow slide that had recently occurred. We agreed that even though we were super close to the ice caves- we would turn around and move as quickly and as quietly as we could back the way we had come. It was not worth the risk of death to see the caves today. The weather was worsening. It had been snowing earlier and the snow turned to large chunks of sleet that were falling on us. It made visibility really poor and it was super wet and heavy. This type of wet weather only increased the avalanche danger on what were already very unstable snow conditions on the mountains all around us. We encountered a dozen or so hikers on our way out who were headed in. We warned each of them about what had happened. So we are both safe and sound at home and are grateful to be warm and dry. And alive!

Oh- an those warning signs that the US Forest Service posts about avalanche danger? Please don't be like us and walk right past them. Please read them and follow the directives as outlined. Avalanche danger is VERY real. Now is not the time for back country exploring without proper training, exit plans and survival gear.
Amber and I plan to return to Portage to make this hike again this summer, when there is no more threat of Avalanche." 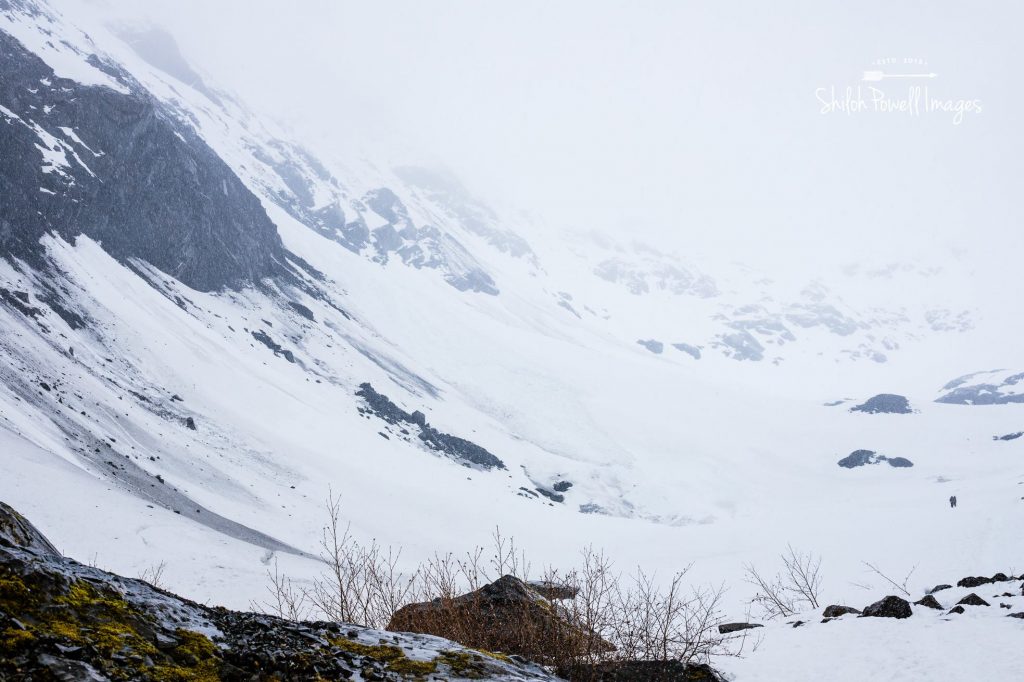 Ice caves with avalanche debris above them on the left and hikers on right in valley bottom. 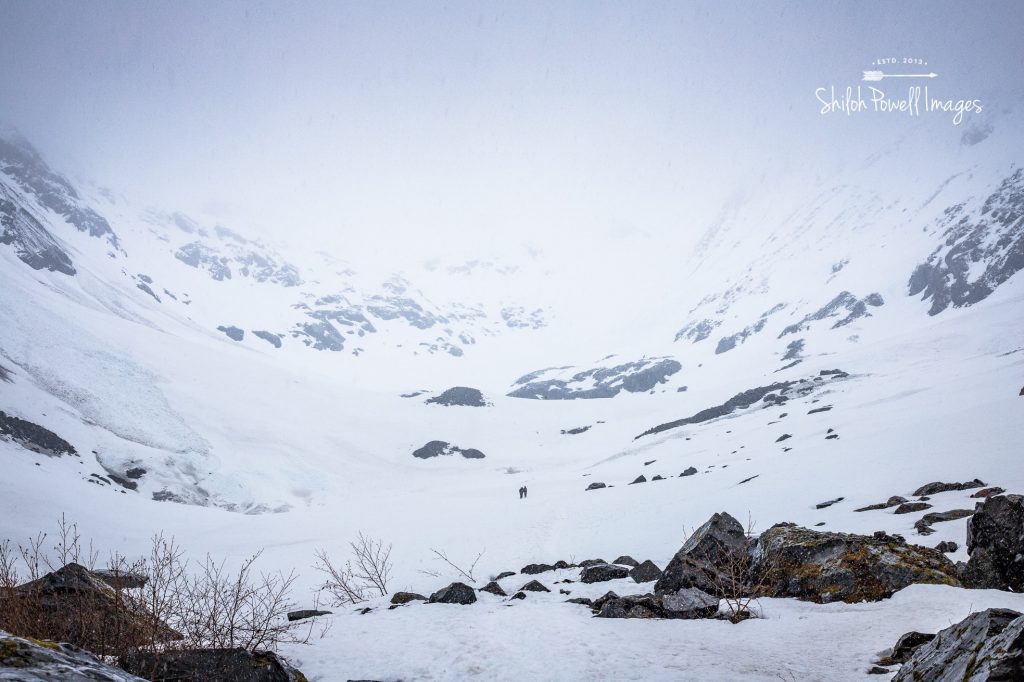 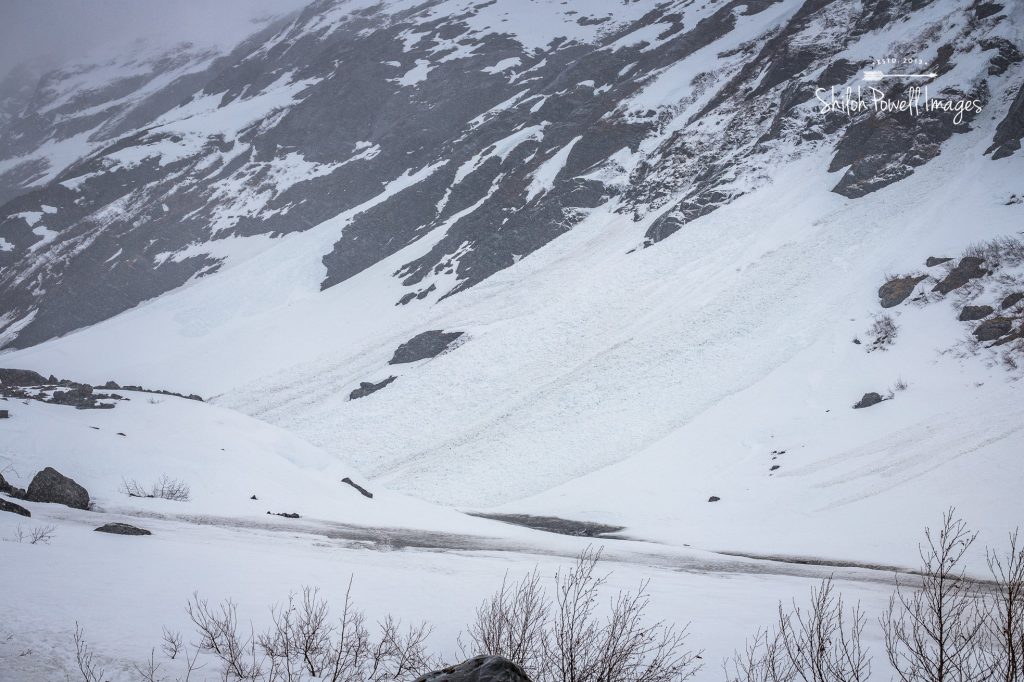 Avalanche activity on the East facing slopes as well 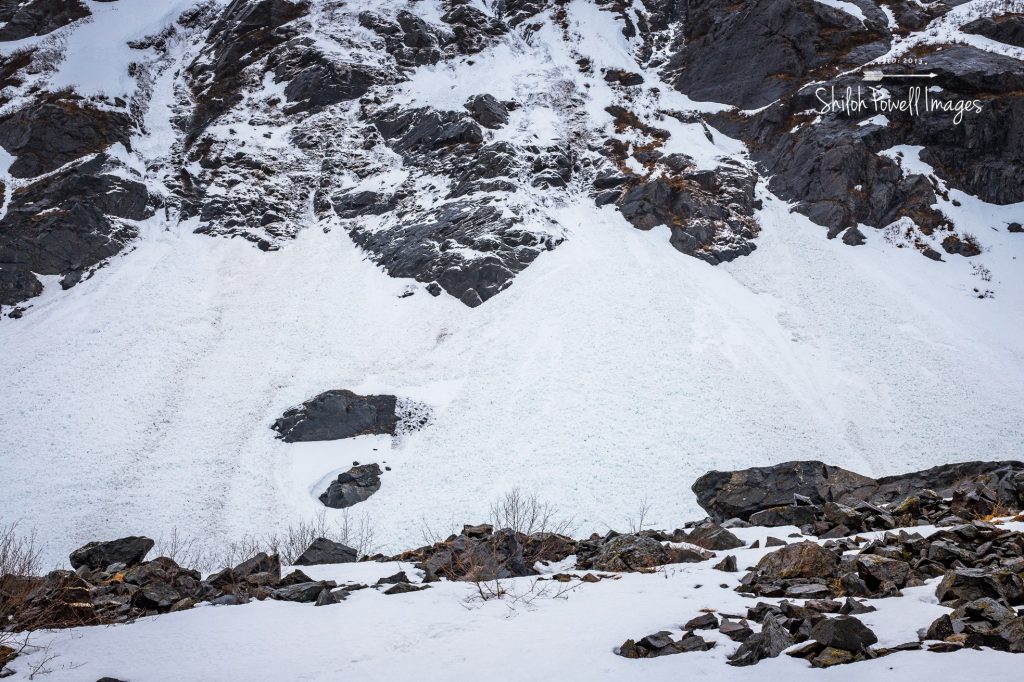 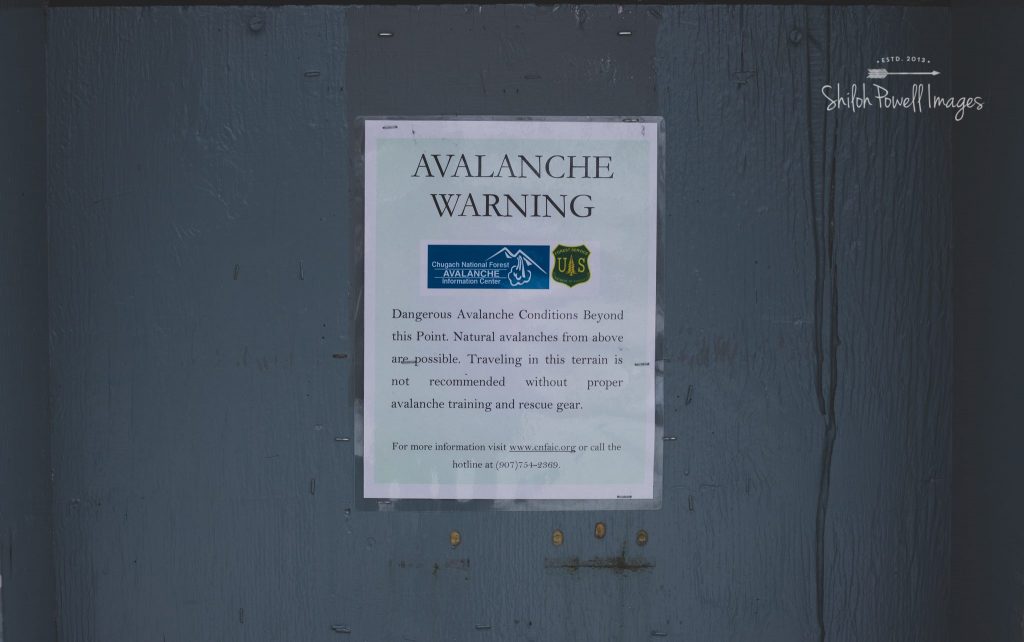 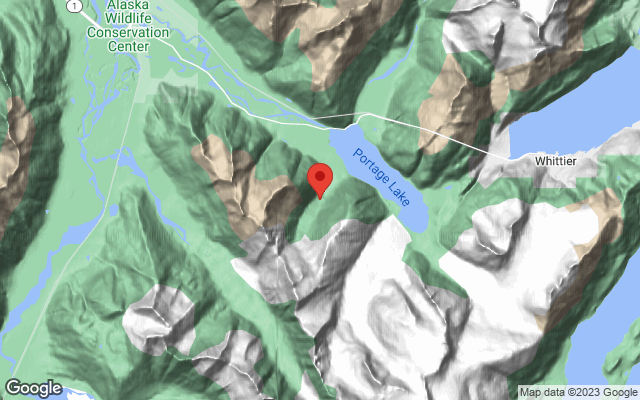