Up-track towards Hatch/April Bowl, stopping at a bench below $1000 run. (Pin is at pit location)

Visibility was in and out all day, but we saw the following avalanches from the past 24 hours:

Marmot: Multiple small crowns on SW aspect of Marmot - see photo below - likely from one slide that initiated near the peak. Several smaller crowns just to the south on the same aspect.

Skyscraper: Small crown on a SE aspect off the ridgeline towards Nixon's Nose - photo below.

4068': Small cornice fall it looked like over a North aspect, but light was flat.

One IMPRESSIVE WHUMPH at the pit location. This was the sort of whumph where you notice a deformation of the snowpack and hear the propagation travel away from you... One additional fairly meh whumph in the creek bottom near the parking lot.

Chased the promise of suckerholes today and had an hour of almost success midday with barely broken skies... but generally overcast or obscured.
Warm - 34 degrees at the parking lot (2900') - and probably not much below freezing up to 3900'...
Brief period of light snow in the afternoon at 3900'. Occasional light SE winds. 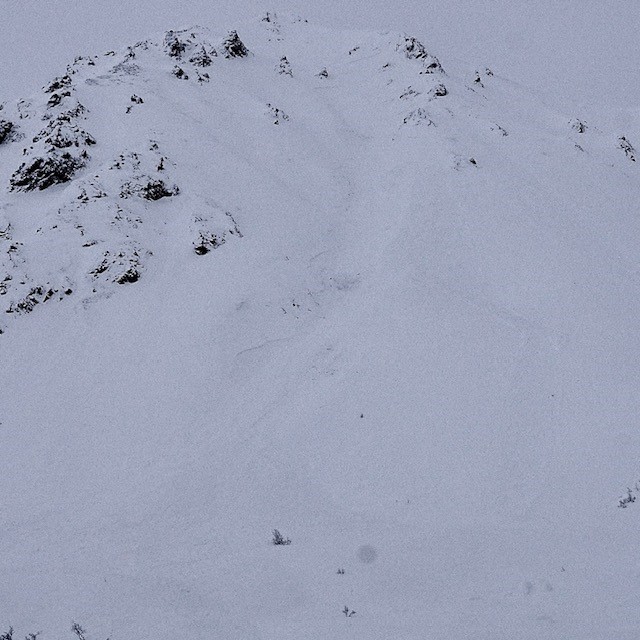 Crowns on Marmot SW face, from a slide that initiated near the top - similar small crowns were on the same slope to lookers right, between this gully and the next. 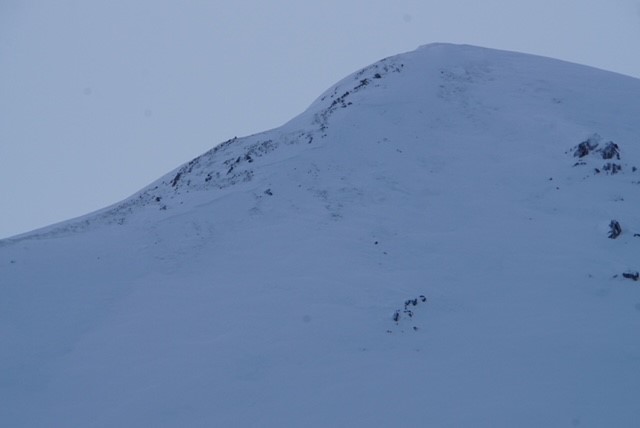 Small crowns off the ridge of Skyscraper, heading towards Nixon's Nose 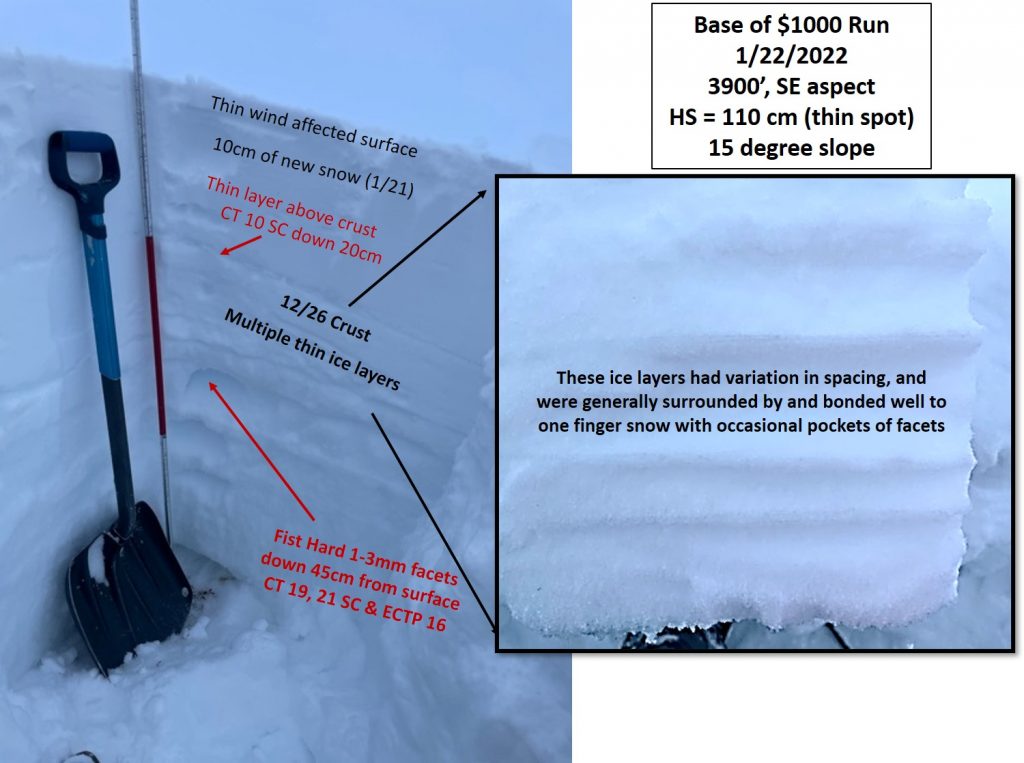 Pit at the site of the impressive whumph; while the 12/26 crust is not buried as deep here, the place where the collapse initiated had 45cm of snow over the crust. (This location had collapsed in the whumph before tests were conducted.) 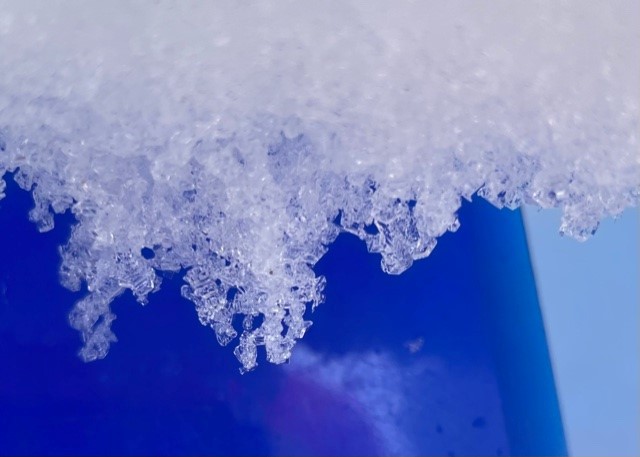 The suspected weak layer was a fairly thick layer of fist hard, very loose 1-3mm facets, delicately chained together. In this photo, the bottom half of the layer was carefully removed, leaving chains dangling! 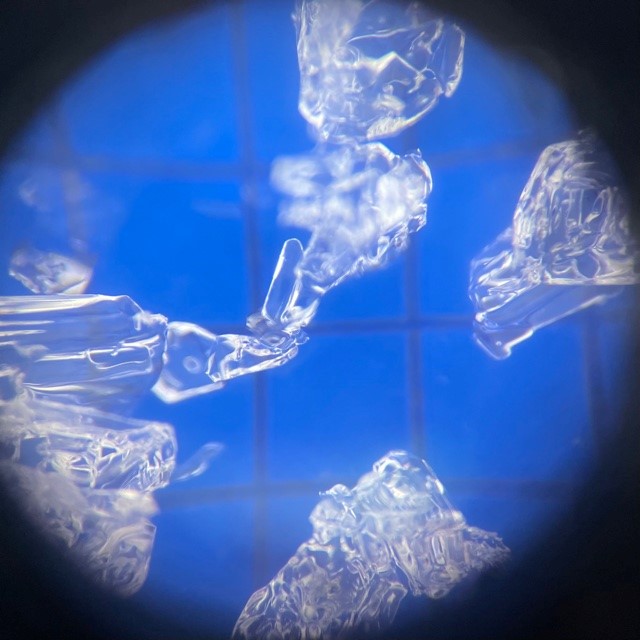 Chained facets through the scope. 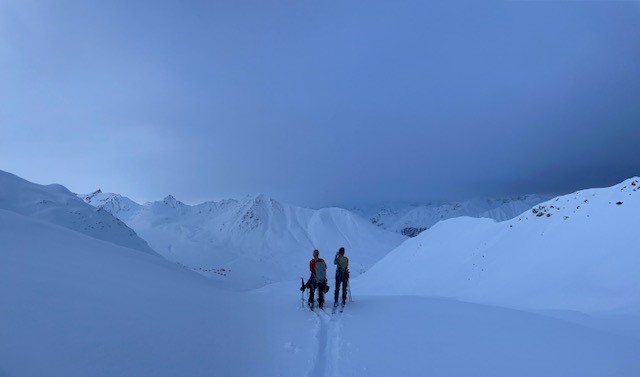 Pit location... and sky conditions when there was some limited visibility/light! 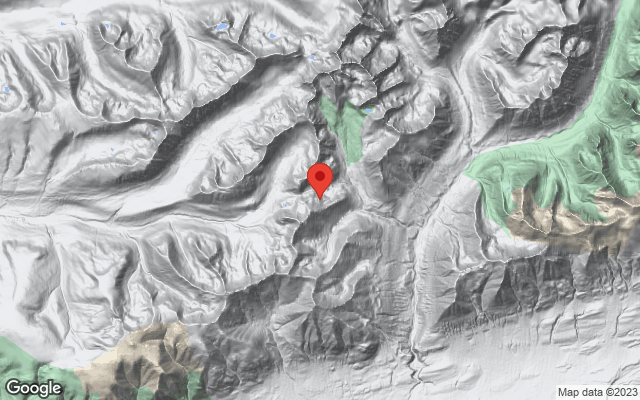