This weekend we skied between pass level and 4,700 feet ASL. We skied or skinned through all aspects of the compass. Generally we observed great stability with two exceptions.

One note on ski conditions: Granddaddy Couloir is extremely thin near the top. To the point that many members of our group side stepped down the choke.

On Saturday morning I triggered a small slab avalanche in Gold Pan upon entering a run under a cornice. I was the third person on the slope and the two before me did not trigger anything although their tracks were just skier's right of the area that slid. The slab broke at my skis and propagated about 20 feet. It quickly came to a stop as the slope flattened out below. Given its location under a cornice, it was probably a soft wind pocket deposited immediately under the ridge line. It was low consequence, but would have been potentially dangerous in steeper, complex terrain.

The other sign of instability I observed was in the basin SE of the Pastoral Peak. The snow on south facing terrain in this basin was noticeably heavier. On a skintrack up a SSW aspect between 3,500 and 4,000 feet many corners of the switchback broke off and one crack extended about 10 feet out from my skis. This instability was limited to the top 4-6 inches of the snow which were heavier than the underlying layer. To avoid this, we skied a slightly more westerly aspect that appeared to not have this layer - no signs of instability were observed on the descent. I actually think this layer may have been from sun affect. 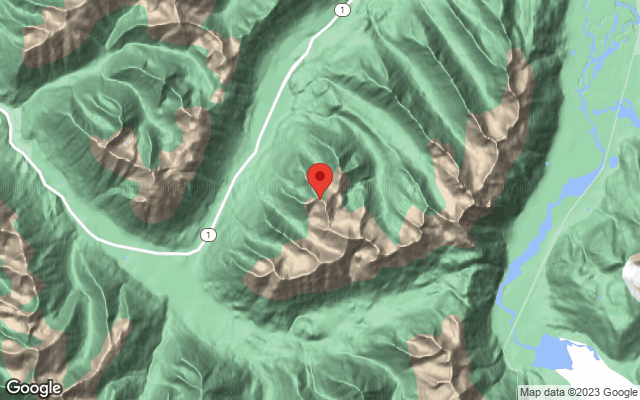