The avalanche danger is MODERATE across the Advisory area this morning but will rise to CONSIDERABLE  above 2000′ on South (SE-SW) aspects due to the possibility of wet loose avalanches and glide avalanches in the afternoon. With warm temperatures and direct sunshine on steep, solar aspects triggering a large, dangerous deep slab avalanche in the Alpine is also still a concern. Give cornices and glide cracks a wide berth. Pay attention to changing surface conditions and avoid solar aspects later in the day.

PORTAGE VALLEY:  There is a still a chance that direct sunshine and afternoon warming could initiate wet loose avalanches that run to lower elevations or cause cornices to fall. Due to steep avalanche terrain directly above Byron Glacier Trail – this summer trail is not recommended.

SUMMIT LAKE (& INTERIOR EASTERN KENAI MTS): The snowpack in this zone is shallow and has many weak layers. Human triggered slab avalanches remain possible in upper elevation terrain with direct sunshine and warming temperatures. In addition, look for wet loose avalanches and changing surface conditions in the afternoon.

SEWARD/LOST LAKE: Similar to Turnagain – Human triggered avalanches will be possible today with warm temperatures and direct sunshine. Extra caution especially on steep, solar aspects in the Alpine is recommended.

Wet loose avalanches are a concern today on solar aspects due to above freezing temperatures and cloudy skies trapping in the warmth. Many weather stations have remained above freezing for the last two days including Seattle Ridge. Yesterday light to moderate winds helped to keep surfaces cooler, but today’s winds are expected to decrease to calm this afternoon. Lack of wind combined with radiation from the sun could play a bigger role in heating up South (SE – SW) facing aspects in the afternoon and evening. Also thin cloud cover today has the potential to trap more heat and “greenhouse” the snow. All of these subtle factors are impossible to fully forecast and evaluating the snowpack as you travel is essential. Today it will be important to pay close attention to surface conditions. If you are sinking in on your skis or trenching on your machine or punching through with your boots it’s a good idea to get off the slope. In the Alpine drier snow may feel like mashed potatoes as it heats up. Be on the lookout for roller balls or small avalanches initiating from rocks. On slopes steeper than 35 degrees you could initiate a small avalanche that entrains a larger volume of snow as it picks up momentum. Plan your route to avoid travel on or under steep, solar slopes later in the day and recognize that the greenhouse effect could warm shaded aspects in the Alpine as well. Choose terrain carefully! 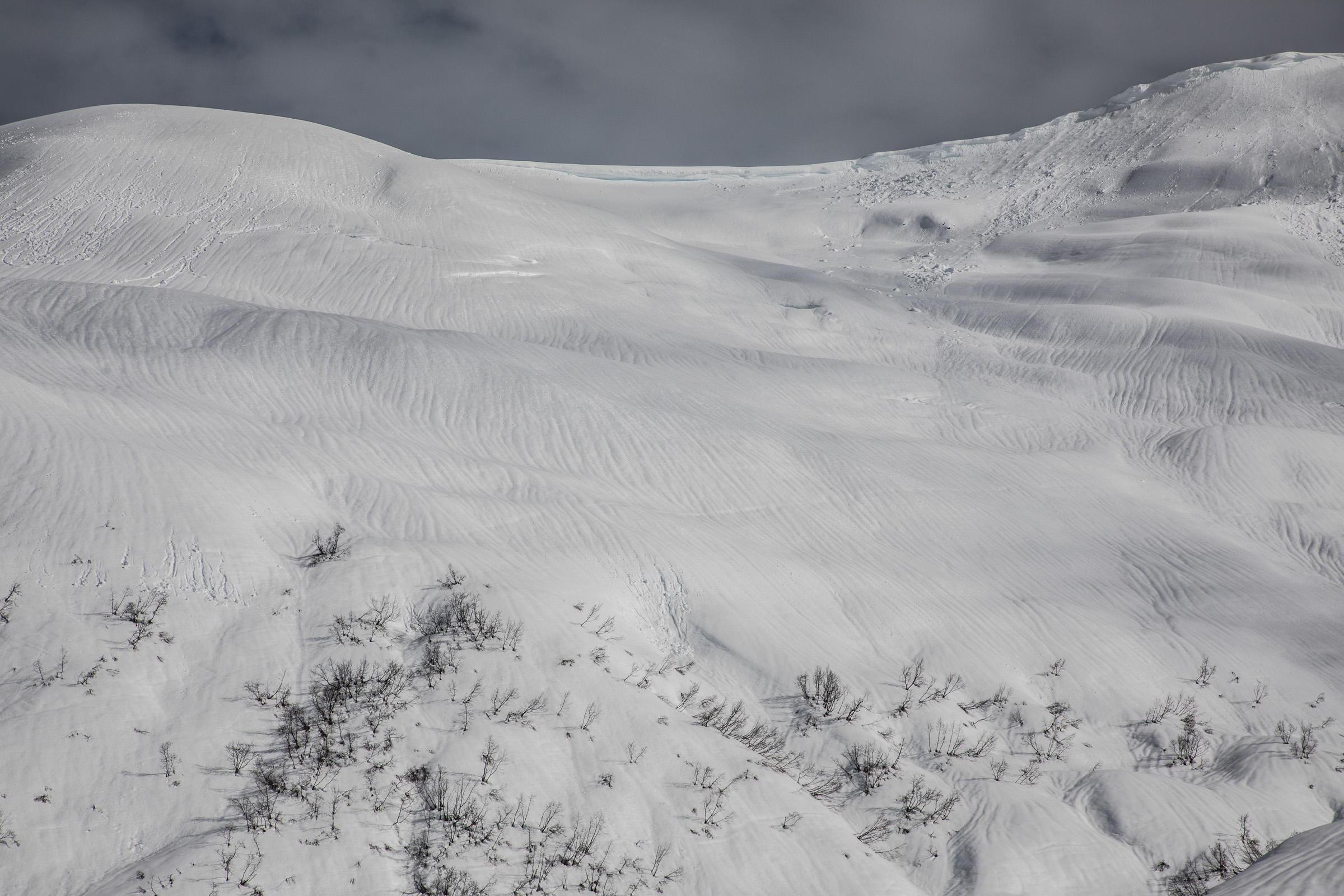 Southwest facing slopes of Magnum presents a variety of avalanche issues including a large cornice, glide cracks widening, and the potential for triggering wet loose avalanche with warming later in the day.

Avalanche Problem 2
Deep Persistent Slabs
Deep Persistent Slab avalanches are the release of a thick cohesive layer of hard snow (a slab), when the bond breaks between the slab and an underlying persistent weak layer deep in the snowpack. The most common persistent weak layers involved in deep, persistent slabs are depth hoar or facets surrounding a deeply buried crust. Deep Persistent Slabs are typically hard to trigger, are very destructive and dangerous due to the large mass of snow involved, and can persist for months once developed. They are often triggered from areas where the snow is shallow and weak, and are particularly difficult to forecast for and manage.
Likelihood of Avalanches
Terms such as "unlikely", "likely", and "certain" are used to define the scale, with the chance of triggering or observing avalanches increasing as we move up the scale. For our purposes, "Unlikely" means that few avalanches could be triggered in avalanche terrain and natural avalanches are not expected. "Certain" means that humans will be able to trigger avalanches on many slopes, and natural avalanches are expected.
Size of Avalanches
Avalanche size is defined by the largest potential avalanche, or expected range of sizes related to the problem in question. Assigned size is a qualitative estimate based on the destructive classification system and requires specialists to estimate the harm avalanches may cause to hypothetical objects located in the avalanche track (AAA 2016, CAA 2014). Under this schema, "Small" avalanches are not large enough to bury humans and are relatively harmless unless they carry people over cliffs or through trees or rocks. Moving up the scale, avalanches become "Large" enough to bury, injure, or kill people. "Very Large" avalanches may bury or destroy vehicles or houses, and "Historic" avalanches are massive events capable of altering the landscape.

Two days ago a very large natural slab avalanche was reported north of Girdwood high in the alpine around 4500’. A wide crown was described as very deep. Evidence of deeper instabilities is visible all over the mountains following a widespread wet slab avalanche cycle that ended on Monday. Now the deeper instability is more of concern in the alpine above 3000’, above where it rained last week. This colder snow in the Alpine is now getting warmed by direct sunshine and rising temperatures during the day, but the potential for triggering a deep slab exists on all aspects. This is a very difficult avalanche problem to evaluate due how deeply buried (5-10+’) the old snow (faceted) interface lies. As we move away from a two week storm cycle that created this problem, a lot uncertainly remains for triggering this kind of avalanche. Signs of instability won’t necessarily be present and it could be the 1st or 10th skier or rider on a slope that triggers a very large destructive avalanche. Use good travel protocol and think about consequences if a slope does slide. In addition, if traveling in the alpine look for areas that are more wind-loaded, watch for cracking and listen/feel for hollow snow indicating wind slabs in upper elevation terrain.

South of Turnagain in Summit Lake and areas in the interior Kenai Peninsula have a very poor snow structure with variety of old weak layers in the mid pack (facets and buried surface hoar.) Triggering a persistent slab 2-3’ deep as slopes warm in the afternoon sun is possible in the alpine.

CORNICES: Cornices are very large and warm air temperatures and direct sunshine could destabilize them today. A cornice fall has the potential to trigger a very large avalanche on the slope below and could break farther back than expected. Give them a wide berth. 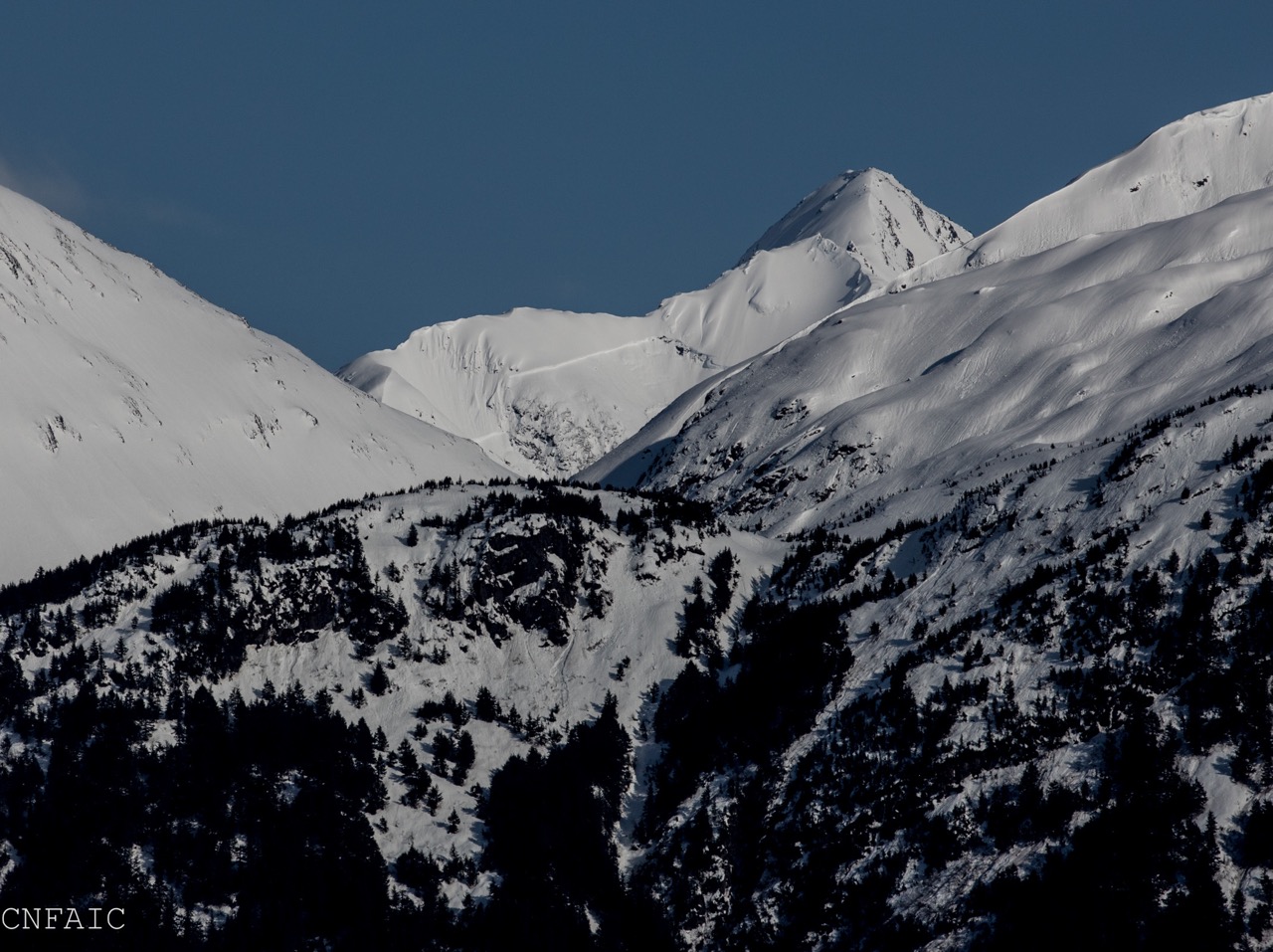 This crown was visible on Monday in the Twentymile zone and is a good example of how deep a slab might release.

Many glide cracks have avalanched over the last week including several yesterday on the Southeast slopes of Seattle Ridge. One of these glide avalanches pulled out a slab along with it. Above freezing temps and solar warming today may allow for more glides to release naturally. Glides are very unpredictable and fail at the ground pulling out the entire season’s snowpack. Many cracks are opening up in popular terrain and avoidance is strongly recommended. Plan your routes to avoid spending any time below existing glide cracks. 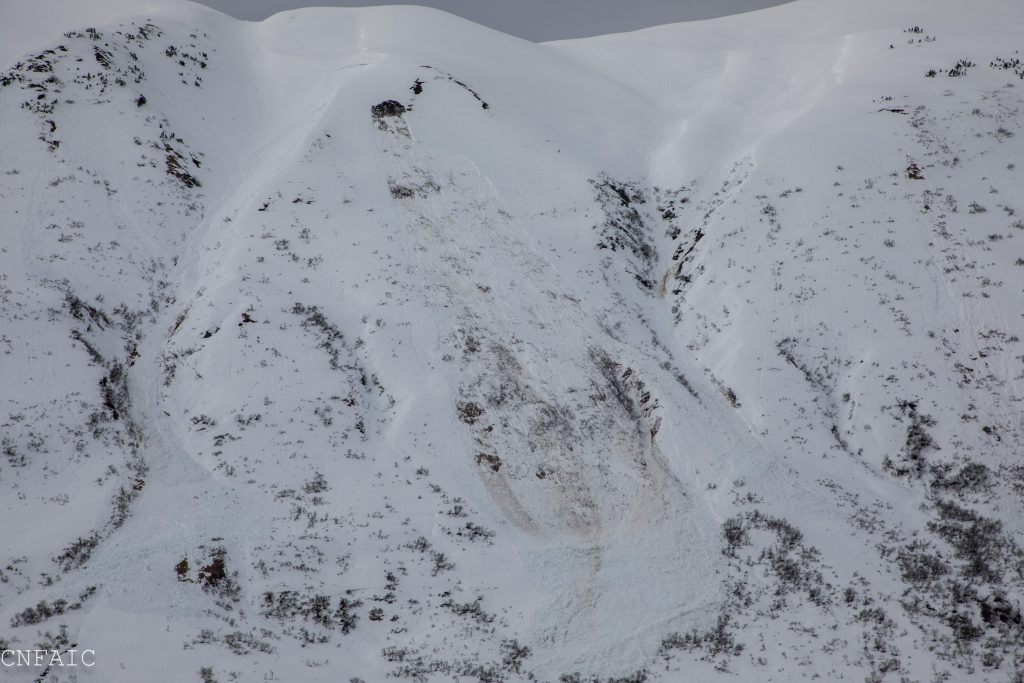 One of several glide avalanches that released yesterday on the SE face of Seattle Ridge. This one also initiated a slab with it. Keep in mind this elevation band did not freeze overnight and may see more activity with daily warming and sun today.

Yesterday: Skies ranged from cloudy to hazy with the sun poking through on occasion. Temperatures reached the mid 50Fs near sea level, mid 40Fs in the mid elevations and mid 30Fs in the upper elevations. Overnight temps at sea level and in the mid elevations remained above freezing. Seattle Ridge weather station has also remained above freezing overnight, but Sunburst and Summit Lake dipped into the upper 20Fs. Ridgetop winds were 8-10mph with gusts 15-20mph from the East all day and overnight.

Today: Skies could range from partly cloudy to mostly cloudy with a chance of scattered showers near coastal areas. No accumulation is expected. Daytime temperatures are expected to reach the mid 40Fs in the mid and lower elevations. In the alpine temps could reach the upper 30Fs. Ridge top winds from the NE will be light (5-15mph) but are expected to decrease into the afternoon.

Tomorrow: High pressure will continue tomorrow and into the weekend. Some cloud cover is expected through tomorrow. Temperatures are expected to remain in the 30Fs to mid 40Fs with light and variable winds. No precipitation is expected.