A generally  LOW  avalanche danger remains for Turnagain, Girdwood and Portage areas. Although triggering a slab avalanche is unlikely, watch for sluffs on steep shaded slopes. Avoid travel under glide cracks and give cornices a wide berth.

Today will be another day of Normal Caution (LOW danger). Clearing skies, temperatures generally in the 20Fs and calm winds should not have much impact on avalanche hazard.  With afternoon sunshine and as valley temperatures rise above freezing, low elevation solar aspects may see a little surface heating.

“Don’t mess with the brown frown!” i.e. avoid travel under glide cracks. Late last week and into the weekend we saw several glide cracks release into avalanches in the Girdwood Valley and at Turnagain Pass. Although many of these slides are on the smaller side and in areas not commonly traveled, one released Friday, March 1st on Seattle Ridge. As far as the older glide cracks we’ve been monitoring in popular areas such as Magnum, Lipps, Cornbiscuit, these do not appear to be moving as quickly. PSA: Help us keep track of these cracks and send us a photo!

Things to keep in mind if you are headed into the backcountry:

Surface conditions? A stout sun crust has been found on southerly facing slopes. Otherwise, 4-8″ or so of soft re-crystalized (near surface faceted snow) sits over a firmer base on shaded aspects and some sastrugi, old wind crust and/or rime crust can be found along ridgelines. In anticipation of the next storm, we are closely mapping the surface conditions as well as watching for new surface hoar growth. 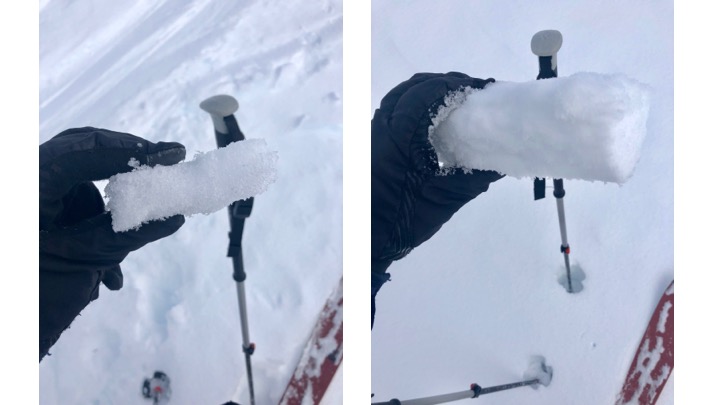 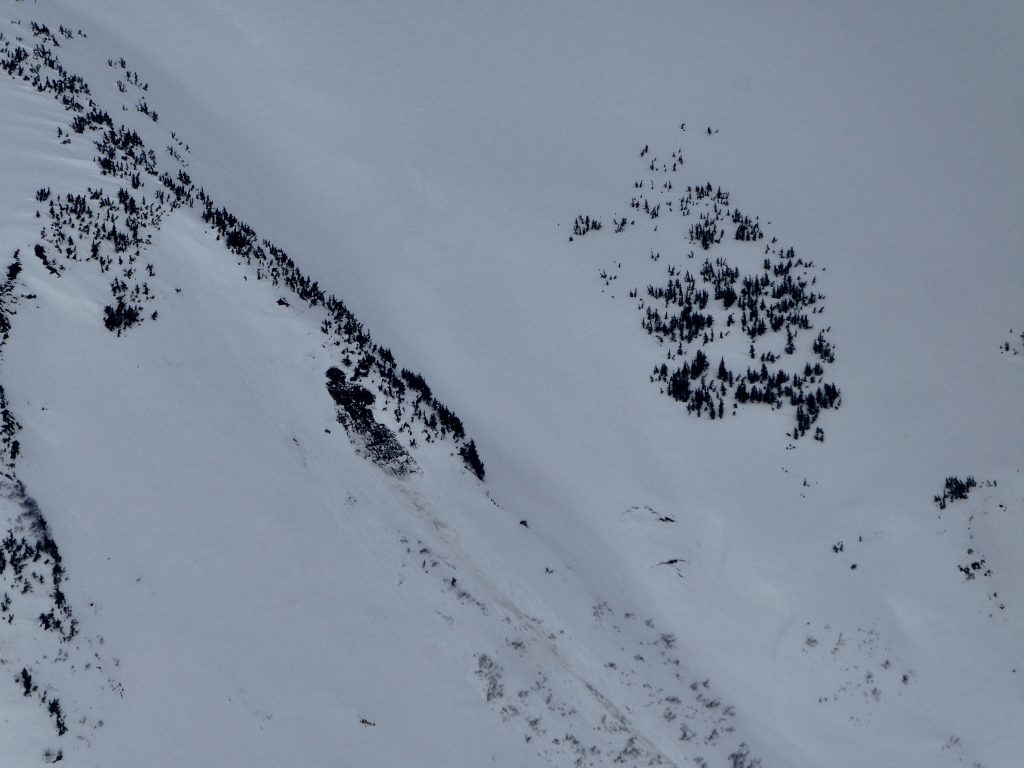 Closer view of the Seattle Ridge glide avalanche that occurred on March 1st and glide cracks to the right, 3-3-19. Photo: Allen Dahl

South of Turnagain – Summit Lake and Silvertip zones:  For anyone traveling in this area note that a shallow snowpack with a generally poor structure exists. A variety of old weak layers (facets and buried surface hoar) sit in the mid and base of the snowpack. It is uncertain as to how reactive these layers are at this point and if they could produce a slab avalanche. Assessing the slab as well as the weak layer is important. The most suspect place to trigger an avalanche is steep terrain with old, hard wind slabs sitting on weak snow.

Yesterday:  Broken sky cover with a few flurries and some patches of sunshine. Temperatures ranged from the teens and 20Fs to the low 30Fs depending on elevation. Winds were very light and westerly. Skies were cloudy overnight with slightly cooler temperatures and light winds.

Tomorrow: Mostly cloudy skies with a chance of snow showers, temperatures in the 20Fs and light easterly winds. We are still anticipating an overall pattern change and a storm this weekend. Stay tuned for details!