A generally LOW avalanche danger exists across all elevations bands for the Turnagain area in the morning. Radiation from the sun and above freezing temperatures will be heating up Southerly aspects today and could raise the danger to MODERATE in the afternoon. This means a person may initiate a loose-wet avalanche in steep South facing terrain. Pay attention to how wet the surface snow becomes and avoid steep Southerly terrain if you see rollerballs or point releases.  Give cornices a wide berth and avoid travel under glide cracks. Good travel habits, such as exposing one person at a time, watching your partners and re-grouping in safe zones are key ways to minimize risk.

SUMMIT LAKE / SILVERTIP / JOHNSON PASS: More caution is advised South of Turnagain Pass. Keep in mind a thin snowpack with buried old weak layers exist. There is more potential for triggering a large slab avalanche in this zone. Choose terrain wisely and pay attention to how the sun may be affecting solar aspects in the afternoon. Please read the Additional Concerns below.

Take a minute out of your day to help the Community Snow Observations crew with gathering snow depth information in Alaska!! Website is  communitysnowobs.org. It’s easy to do, you just need a smart phone, 30 seconds and your probe to measure the snow depth.

Spring has arrived and with it clear skies and unusually warm daytime temperatures. In the morning a generally stable snowpack exist, but in the afternoon radiation from the sun is now something one must factor into their day. Yesterday was the warmest day so far and several ridge top weather stations reached a high of 47F late afternoon. This is 10 degrees warmer than Monday, which had been our warmest clear weather day, and our first loose-wet cycle in very steep South facing terrain. Yesterday’s exceptionally warm temps combined with the sun broke down a surface crust in this terrain and caused another round of wet avalanches. Rollerballs and small point releases were also seen on Southeast and Southwest aspects which had held dry snow until yesterday. Today expect a melt freeze crust on a wider range of Southerly titled aspects in the morning. This crust will require more energy to break down today, but triggering a wet sluff on steep South slopes is possible later in the day. This will depend on how wet surface conditions get. Also be aware that thin cloud cover can trap in heat and accelerate this process – which is possible later in the day.

In addition to solar radiation and daily warming, there are a few other avalanche problems to consider. These are unlikely, but still important to keep in mind, especially if you’re in pursuit of soft dry snow on shaded aspects. 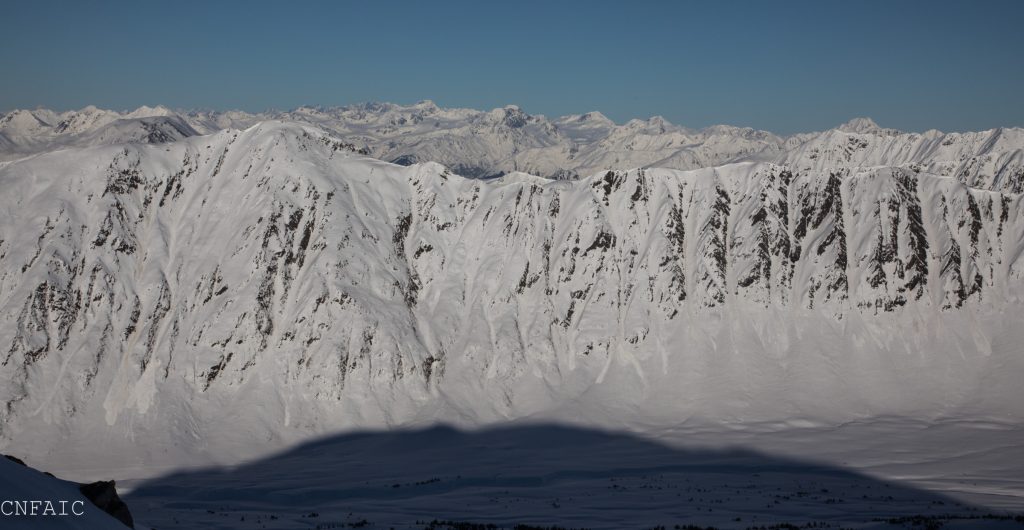 Yesterday temperatures were warmer than expected, upper 40F’s near ridgetops, and numerous wet avalanches were observed in very steep rocky terrain. This photo was taken at 3:30pm of the South aspect of Tincan Proper and the Library. 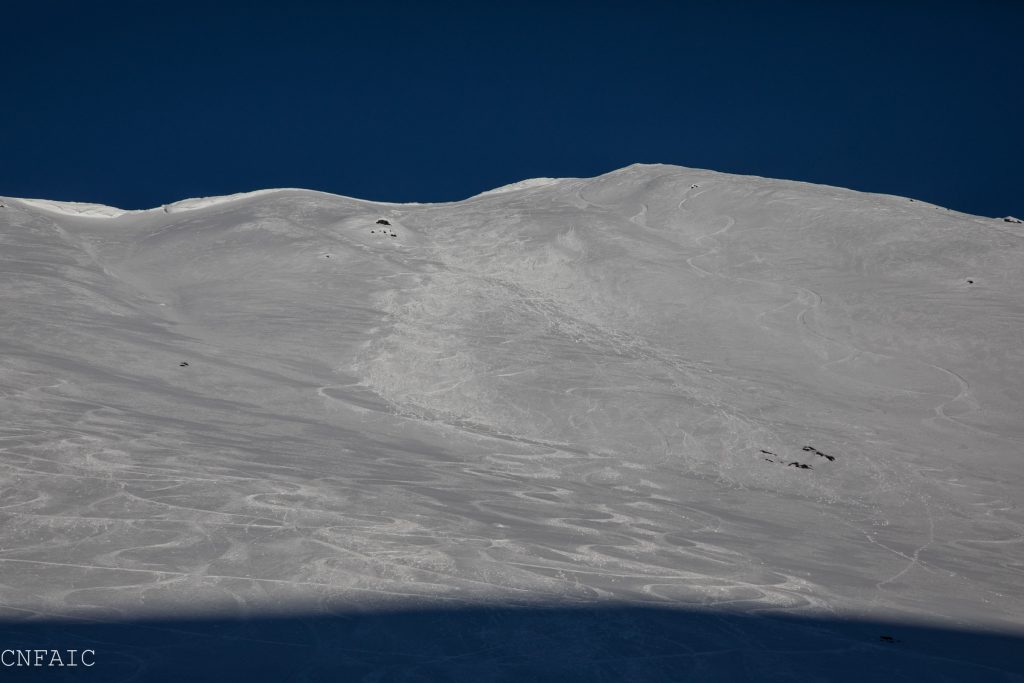 Rollerballs from ski turns on SW face of Sunburst at 4:30pm. At shade line a 1cm crust was immediately present. 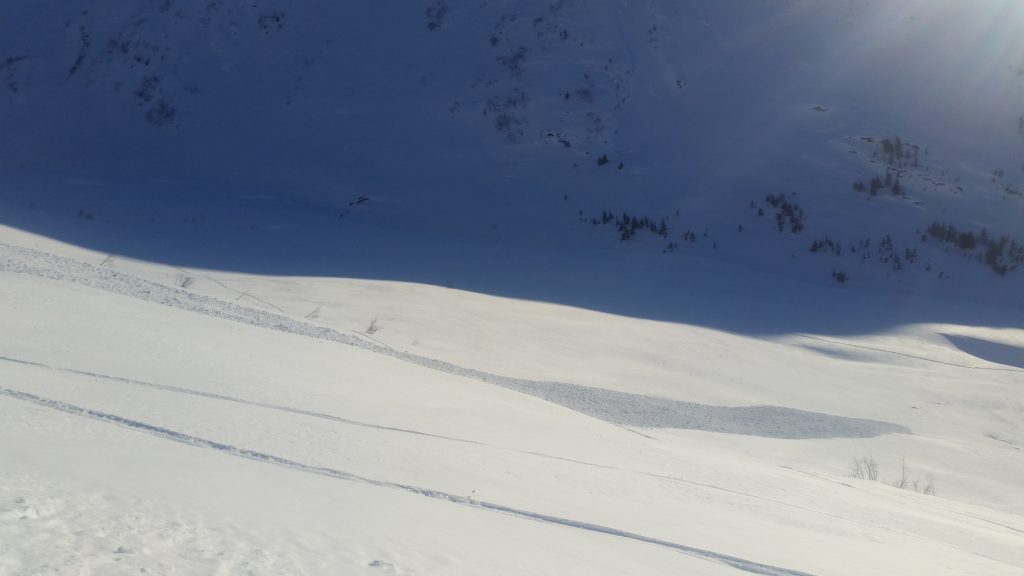 South of Turnagain – Summit Lake/Silvertip/Johnson Pass zones: A shallow snowpack with a generally poor snowpack structure exists in these areas. A variety of weak layers (facets and buried surface hoar) sit in the mid and base of the snowpack and were re-activated a week ago by a strong outflow wind event. This was the last natural avalanche cycle to trigger large slab avalanches in Summit Lake. Although whumpfing has been observed in the Summit area, no signs of instability may be encountered before a slab is triggered. If you’re headed this way, remember the snowpack becomes more complex – evaluate terrain and snowpack as you travel. Similar to Turnagain Pass sun and daily warming will also be important to factor into your day.

Yesterday: Skies were clear and sunny. Daytime temperatures reached a high of 47F at several ridge top weather stations including Sunburst, Summit Lake and Girdwood. Temps at sea level were in the mid to upper-30s F. Overnight ridge top temps dipped to 32F and at sea level temperatures dropped back into the teens F. Winds were light and variable.

Today: Looks similar with another clear and sunny day in the forecast. Partly cloudy skies are possible by late afternoon or early evening. Temperatures at ridge tops are in the low to mid-30s F this morning and are expected to rise into the 40s F similar to yesterday. Inverted temperatures at sea level and valley bottoms will rise with daily warming into the 30s F. Winds will be light and variable.

Tomorrow: Expect partly to mostly cloudy skies. A few flurries are possible, but no accumulation is expected. Temperatures will fluctuate with daily warming with overnight temps in the teens F and daytime highs near 30F. Ridge top winds should remain light.