The avalanche danger remains a ‘scary’ MODERATE on slopes above 2,000′. Large unsurviveable slab avalanches, up to 5′ deep, remain possible to trigger on slopes steeper than 30 degrees. Several tracks may be on a slope before it slides, as was the case yesterday with two large human triggered avalanches. These avalanches can be triggered remotely – from the ridge above, the sides or below. This is a very tricky and dangerous avalanche problem that deserves our respect.

SUMMIT LAKE / JOHNSON PASS:    Human triggered slab avalanches 1-3′ deep are possible above treeline as a variety of weak layers exist in the snowpack. Wind loaded slopes are the most suspect for triggering an avalanche.

LOST LAKE:   We have had reports that avalanches are being easily triggered on wind loaded slopes in the Lost Lake area. Heads up if you are headed this way!

Keep your hackles up! Despite the calm weather over the past three days, large and dangerous human triggered avalanches remain possible. There were three of these triggered yesterday in the Seattle Creek drainage on the backside of Seattle Ridge. The avalanches were 2-5′ thick and 500-1,000+’ wide. Two were on the Widowmaker slide path in Main Bowl (1st Bowl) and the other on Jr’s Run in Jr’s Bowl (2nd Bowl). A synopsis for each avalanche is listed below; we will be gathering more details today. Thank you to the many folks in the area yesterday for sending in their photos and reports.

The problem with the snowpack is a layer of buried surface hoar that sits 2-5′ below the surface. It was initially buried on January 22nd by 1-2+’ of snow then another 6-8″ of snow and wind last week. The layer is beginning to show signs of being more stubborn to trigger, meaning several people can ski or snowmachine a slope before someone accidentally finds a trigger spot and the whole slope slides. We are entering a Lower Probability, High Consequence situation and this is likely to last for quite a while. Some things to keep in mind if visibility is good enough for travel above the trees:

1-  This is a scary situation because the snowpack can ‘feel’ stable and ‘just fine’ even though it may be sitting near the tipping point.
2-  Hence, no signs of instability are likely to be present to clue us into an unstable slope.
3-  Remotely triggering an avalanche from the ridge, the sides or from below is possible, threatening others below.
4-  Save travel protocol and assessing the consequences of an avalanche are key (i.e., larger terrain = larger avalanches, is there a terrain trap  below?)
5-  Sticking to lower angle slopes (below 30 degrees) can be a great way to avoid avalanche issues.

Widowmaker main slide path:
A snowboarder triggered the main Widowmaker path from the very top of the ridge. There were 5-6 tracks on the slope prior. The slab pulled back to nearly flat ground, pulling the snowboarder off the ridge. The rider was able to quickly jump onto the bed surface and escape. The slab was 5′ thick where it was triggered and propagated the full width of the slope. Good radio communication with several groups allowed for a quick assessment that all were ok and no one was caught in the runout below. 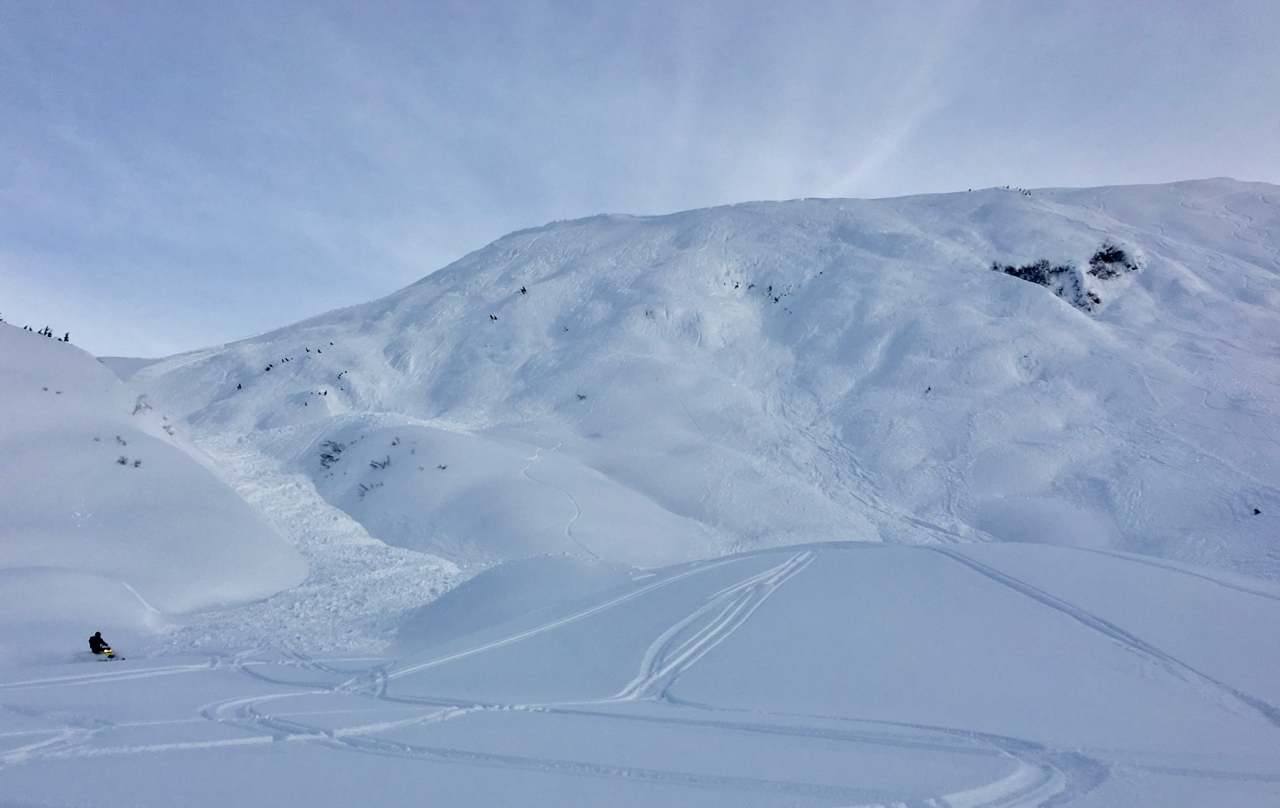 Widowmaker slide path, note the debris filling up terrain depressions. Debris reported to be up to 20′ deep in places. Photo: Jerry Mann. 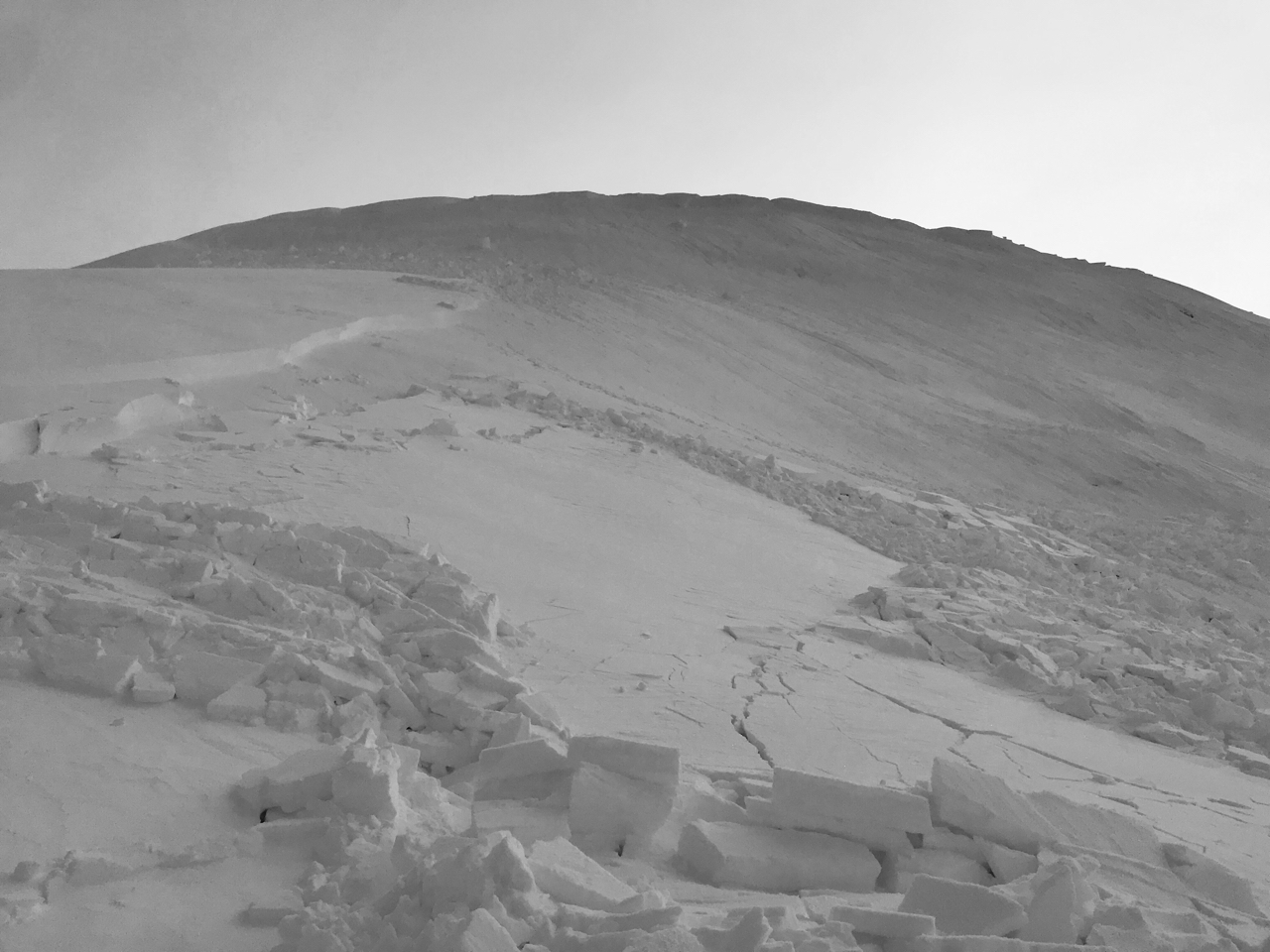 Looking near at the crown of the left side of the main Widowmaker avalanche.

Avalanche on the looker’s right side of the main Widowmaker path:
An hour or two after the main Widowmaker slide, a group of two people on the ridge remotely triggered a second avalanche on the looker’s right of the first. This path had 20+ skier/snowboarder and snowmachine tracks on it. Why it was not triggered earlier and two people 20-30′ away on the ridge did is not only hard to believe, but shows how tricky the snowpack is right now. Furthermore, this area was believed to have avalanched already last week, which should have removed the weak layer. No one was on the slope or in the runout when it slid. 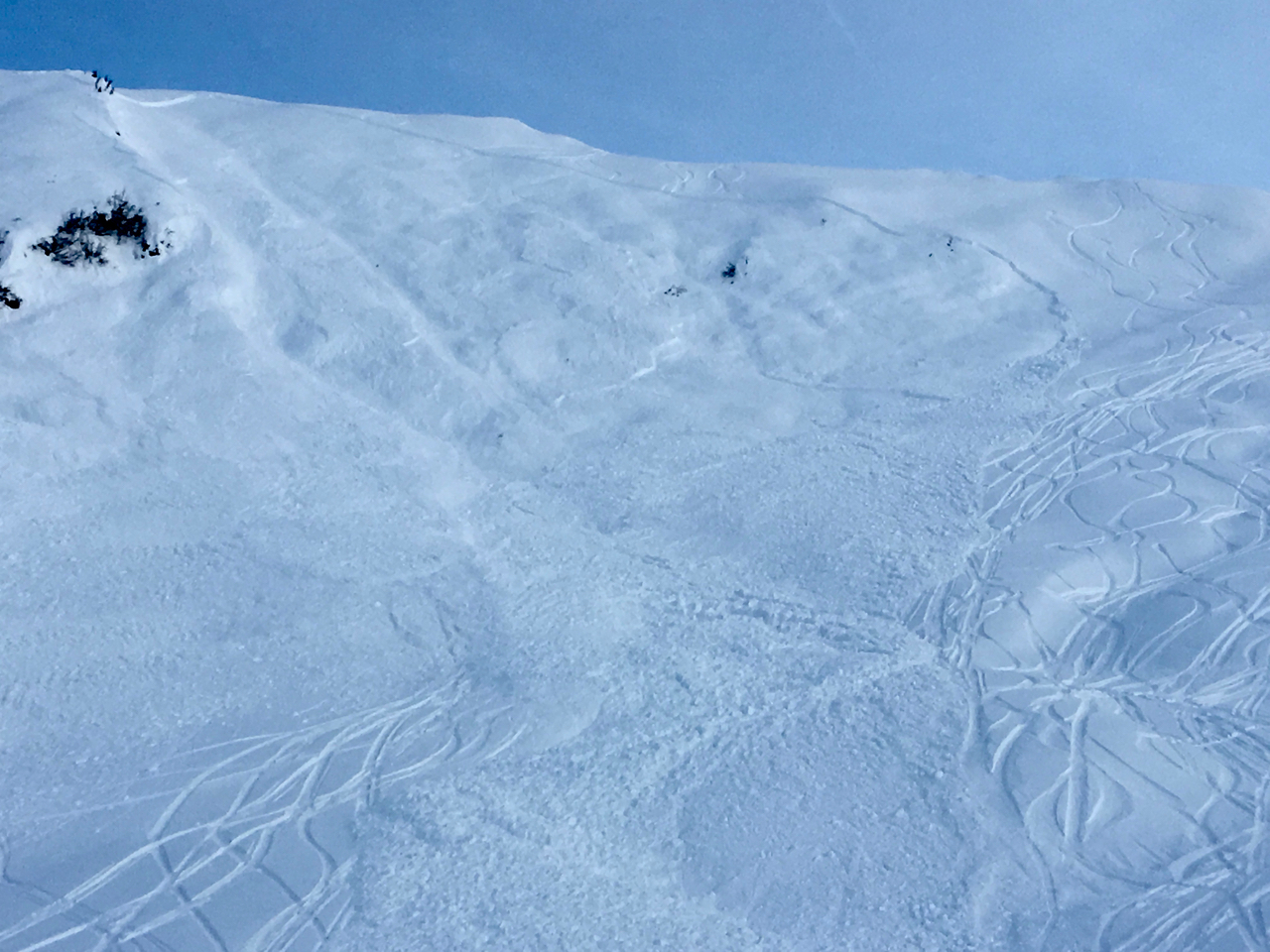 Avalanche on the looker’s right of the main Widowmaker slide. This slope was reported to have slide last weekend and suspected to be a repeat avalanche on the same buried surface hoar weak layer. Photo: Jerry Mann. 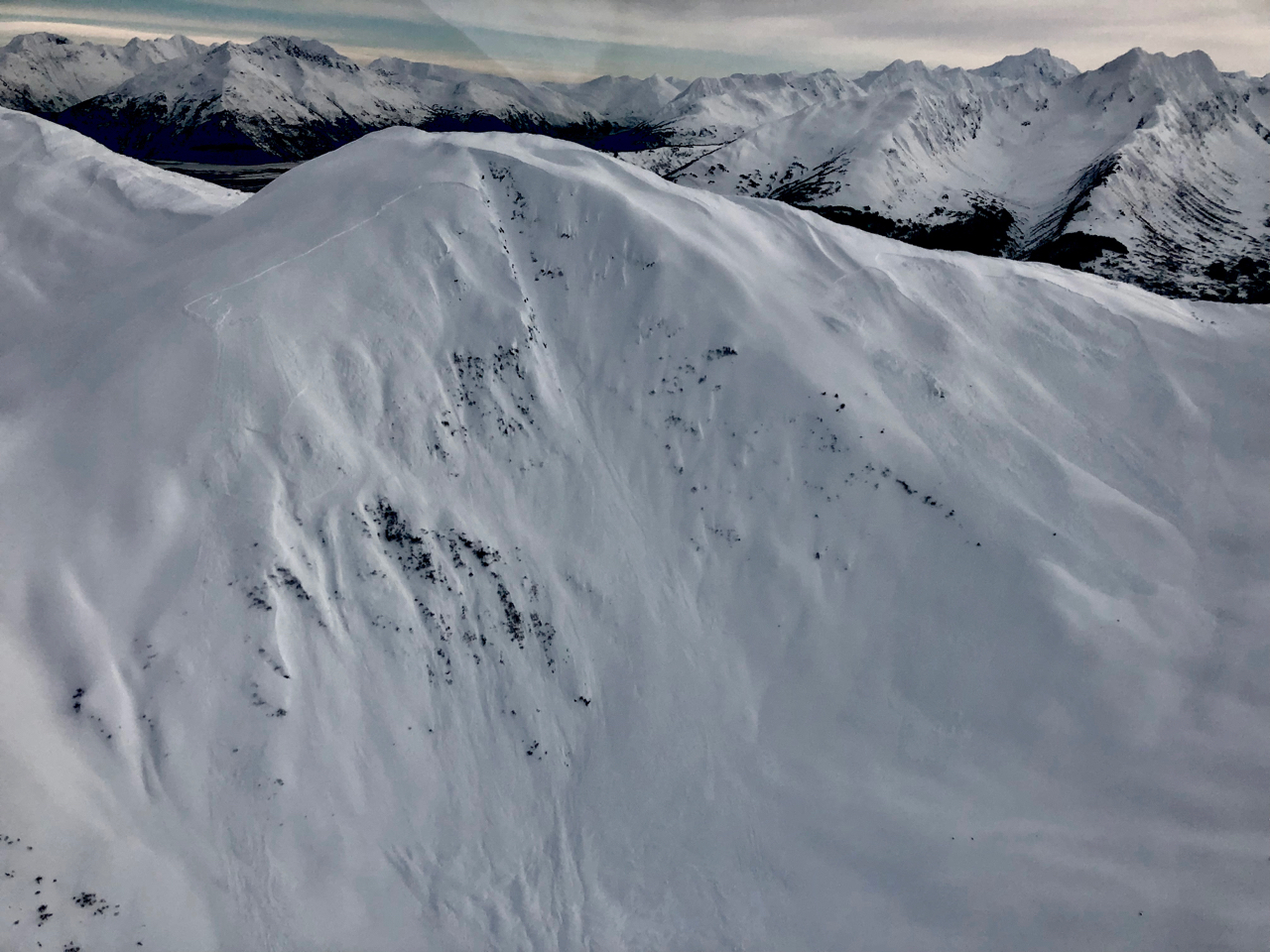 Jr’s avalanche seen from the air. Both crowns from either side of the main gut are visible. 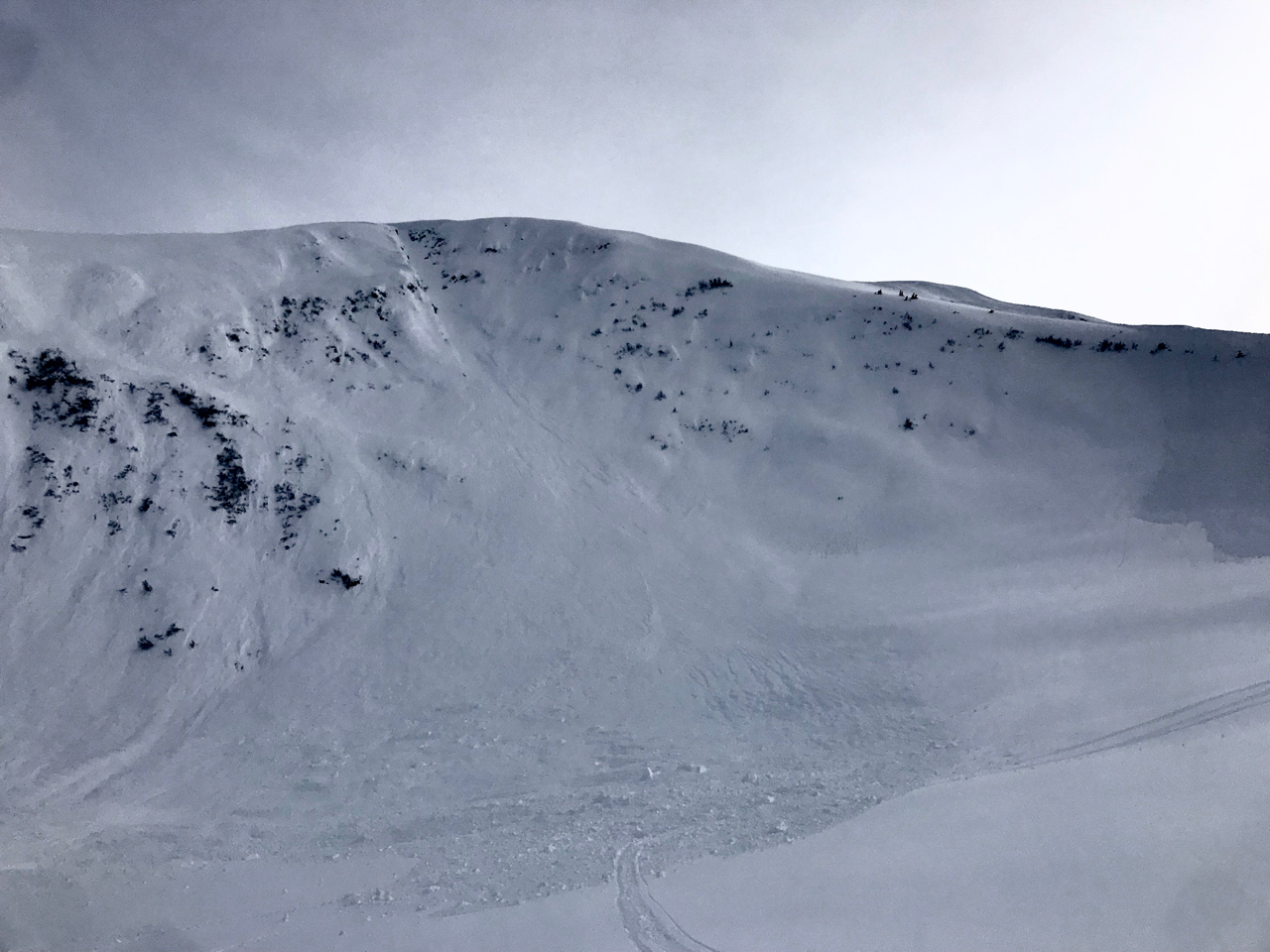 Jr’s slide path with debris running all the way to valley bottom. Only the steeper portion of the slide can be seen in the photo.

Yesterday:   Overcast to clear skies were over the region. Ridgetop winds have been mostly light and variable over the past 24-hours with a few gusts up to 20mph from the east. Temperatures remained cool, in the teens along ridgetops and 20’sF at sea level and valley bottoms.

Today:   Mostly clear skies this morning should give way to cloud cover as the next weather front moves in this evening. There is a chance for a few snow flurries to sea level but no accumulation is expected. Ridgetop winds are expected to be light and variable before turning easterly tonight and picking up to around 10mph. Temperatures look to stay in the teens along ridgelines and in the 20’s in valley bottoms.

Tomorrow:   A strong southwest flow looks to develop over the Kenai and Eastern Turnagain Arm. This will bring increased southerly winds and the chance for 2-4″ of snow. Temperatures are expected to remain cool enough for snow to sea level until Monday when much warmer air arrives.

*The Seattle Ridge anemometer (wind sensor) was destroyed. We are currently working to replace it.