The avalanche danger is MODERATE above 2500′ for triggering a slab 1-2′ thick. Slabs may be small and isolated or large enough to bury a person. Cornices have been recently loaded and could be triggered by the weight of a person or snowmachine. Identify glide cracks and avoid/limit your exposure time under this unpredictable hazard.

SUMMIT LAKE / JOHNSON PASS:  Keep in mind buried weak layers exist in the middle and base of the snowpack. More potential for triggering a large slab avalanche exists in this zone, especially in terrain that has seen recent wind-loading.

Across our region the snowpack is quite variable in the Alpine. Two storms this week left varying amounts of snow across our region favoring coastal areas like Portage, Girdwood, and the Northern end of Turnagain Pass. These new slabs were formed by strong winds and may range from 1-2’ thick. This new snow may be resting on several persistent weak layers (buried surface hoar or near surface facets) formed during the cold clear period last week and between the two storms on Tuesday. Yesterday we received a report of a skier triggered slab near Placer Valley. The slab was around 18” deep, and triggered by a ski cut on a steep terrain feature. No one was caught, but the slab did have two separate layers and was large enough to get someone in trouble in high consequence terrain. Keep in mind there is potential for a slab to be larger and more connected in bigger terrain. Shooting cracks and whumpfing may not be present until a slab releases suddenly. Identify wind-loaded features, evaluate the terrain for consequences, and always us safe travel protocols.

South of Turnagain – Johnson Pass/Summit Lake zone: A very poor snowpack structure exists in these areas.  Multiple mid-pack weak layers of facets and buried surface hoar have been found as well as a facet/crust combination in the bottom of the snowpack. No recent avalanche activity has been observed since the New Year’s storm, but more uncertainty exists for triggering a deeper more dangerous avalanche. If you’re headed this way, it will be important to evaluate terrain and snowpack as you travel. Be on the lookout for signs of instability and maintain extra cautious around wind-loaded slopes. 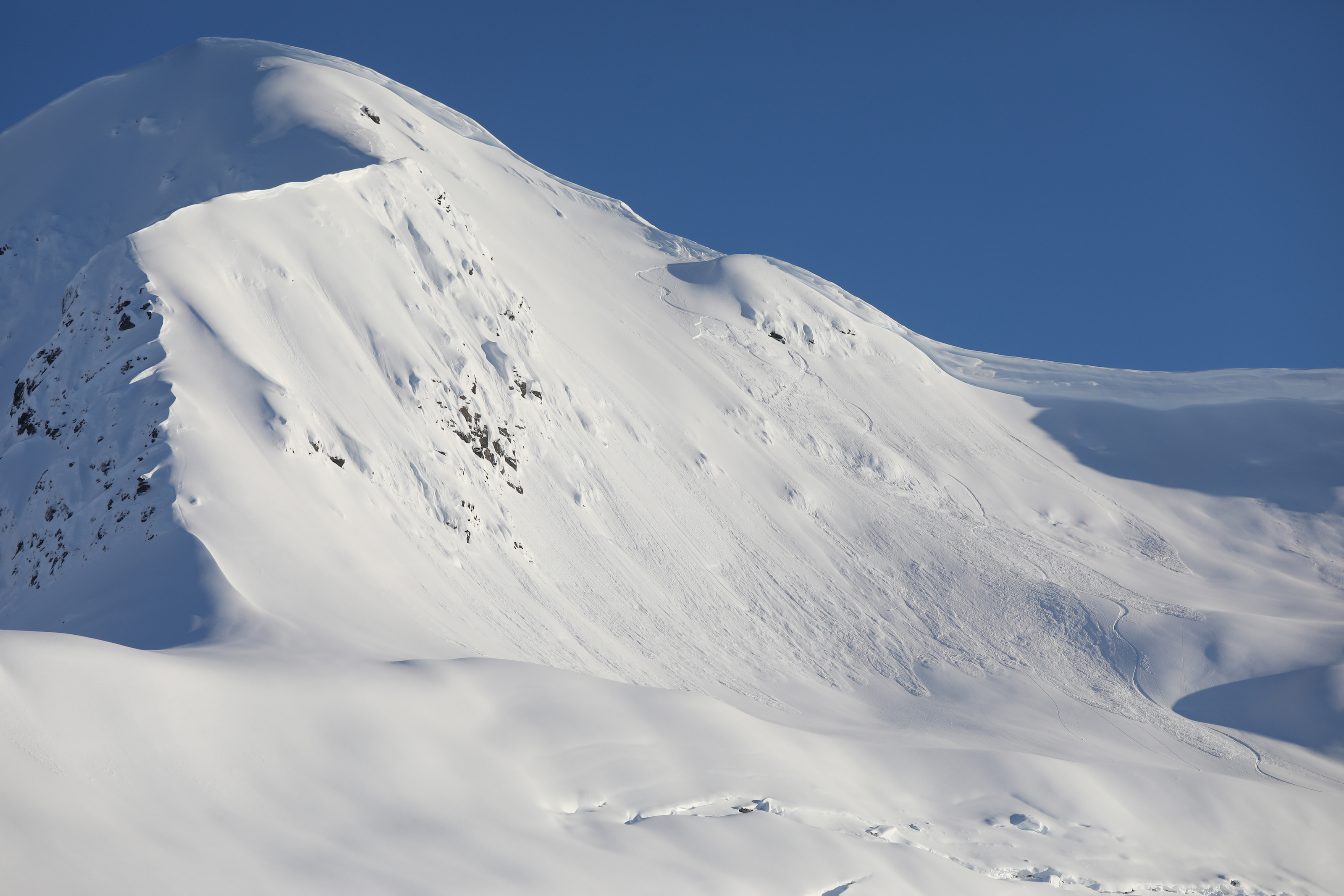 Skier triggered slab on a West aspect in the Placer Valley. Also notice the large cornices.

Cornices:  Recent strong winds and new snow have added stress to cornices. Not only can they break farther back than expected, they may be more tender than usual. Give these features lots of space.

Loose Snow: Yesterday several sun triggered wet-loose avalanches were observed on South facing slopes where rocks and vegetation were heating up the new surface snow. This harzard is unlikely today, but something to keep in mind with inverted temps in the upper elevations. It’s still pretty early in the season for any significant radiation affect at our latitude. 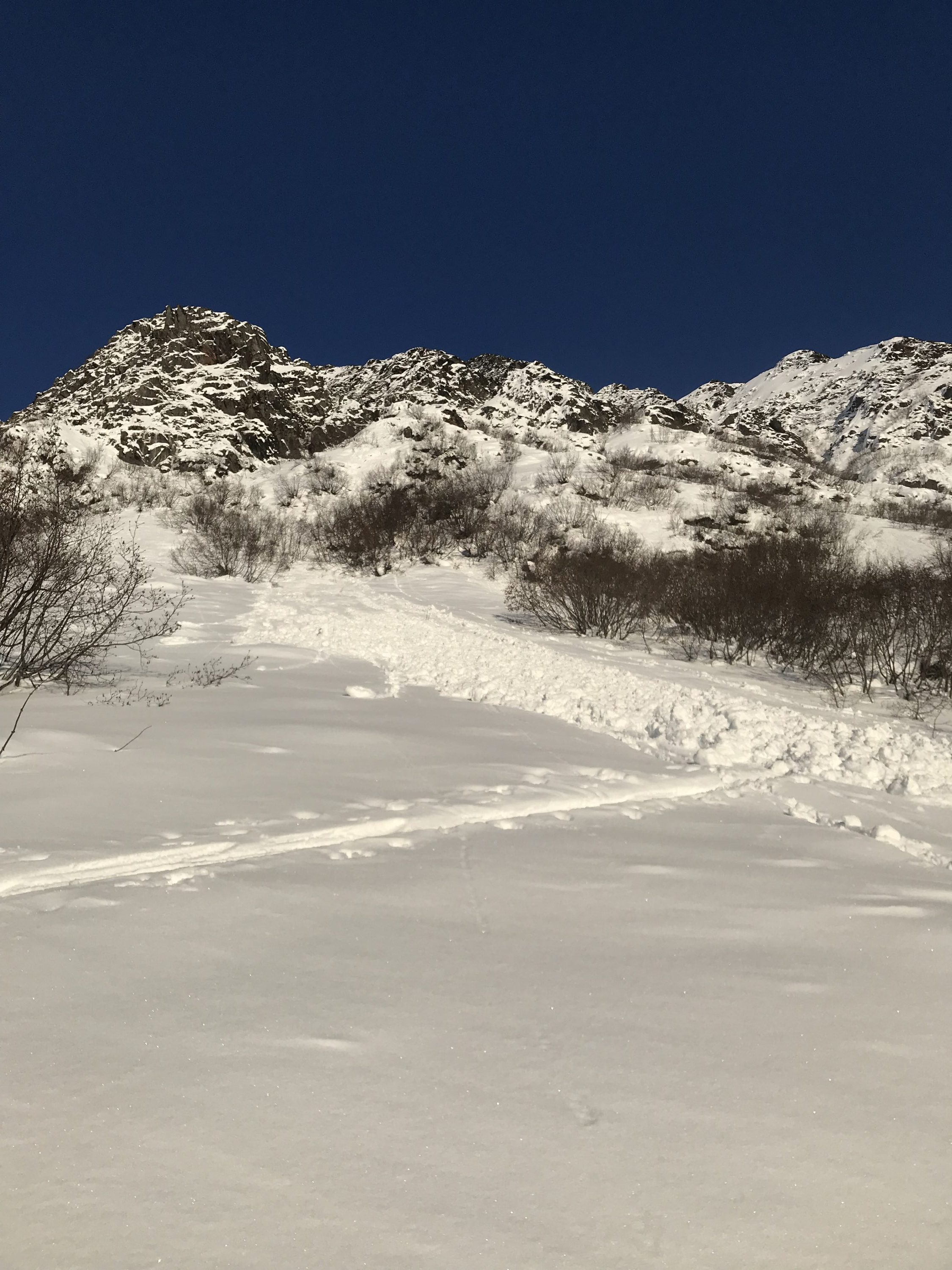 Be on the lookout for glide cracks opening up. They may be hard to see and filled in by recent snow and wind this week. Remember the known areas with cracks are Eddies, Tincan, Sunburst, Magnum, Cornbiscuit, Lipps, Seattle Ridge, Johnson Pass, Lynx Creek, Summit Lake, Petersen Creek, and Girdwood. This avalanche hazard is unpredictable and can release without warning. Identifying cracks and avoiding exposure time under them is the best way to manage this problem.

Yesterday: Skies were clear with valley fog in some areas. Warm air from the day before was mixing in places and slightly inverted. Temps near sea level dropped into the low 20F’s and upper elevations temps were in the low 30F’s upper 20F’s. No precipitation fell yesterday and winds were calm.

Today: Expect clear skies with valley fog. Temperatures will be inverted with valley bottoms dropping from the low 20F’s into the teens and upper elevations will be in the upper 20F’s. Winds will be light and variable. No precipitation is in the forecast.

Tomorrow: Clear skies are expected through the weekend. Temperatures will continue to fall.   Expect upper elevations in the teens and valley bottoms may see low’s in the single digits F. Winds are expected to be light and variable.