A  CONSIDERABLE  avalanche danger remains at all elevations and on all aspects. Large slab avalanches 2-4′ thick are likely to be triggered on slopes steeper than 30 degrees.  These may be triggered from a distance or from the bottom of a slope.  Cautious route finding and conservative decision-making will be essential for safe backcountry travel.

*A  Special Avalanche Bulletin  has been issued through the National Weather Service.  This will remain in effect through 6pm tonight.

Triggering a large and unmanageable slab avalanche 2-4′ thick remains our primary concern. Yesterday, a snowmachiner remotely triggered two slabs on Seattle Ridge from a meadow below the slope; it’s important to remember that these avalanches can be triggered from the flats. These slabs were on the North end of the ridge above the powerline trail. This longtime Turnagain rider noted that avalanches in this area are not often seen. Additionally, similar slab avalanches were triggered in Girdwood Valley in the Notch Mtn area.

The avalanche activity yesterday was all in the mid to lower elevation bands. Various layers of old faceted snow sit under the 2-4′ of storm snow from Friday (photo of this below). The faceted layer has been overloaded by the new snow and is failing, creating the current ‘persistent slab’ avalanche problem. At the higher elevations, above 2,500′, the facets are not as pronounced, yet there are old layers of buried surface hoar that are a concern. How likely a slab is to be triggered in these weak layers at the higher elevations is uncertain at this time. Of note is very little to no traffic was seen in the upper elevation bands yesterday.

If you are headed out into the backcountry today things to keep in mind are:

Slab avalanches on East faceing Seattle Ridge (looker’s right of the up-track). Two of these could be the avalanches that were remote triggered from meadow below yesterday. 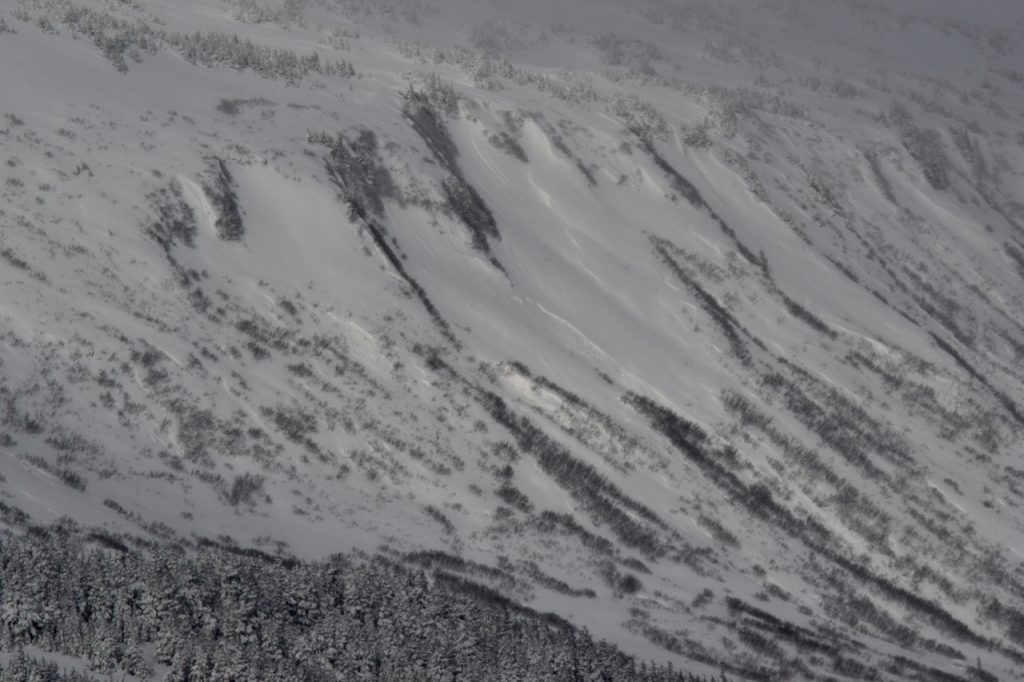 Loose snow sluffs on the West face of Magnum 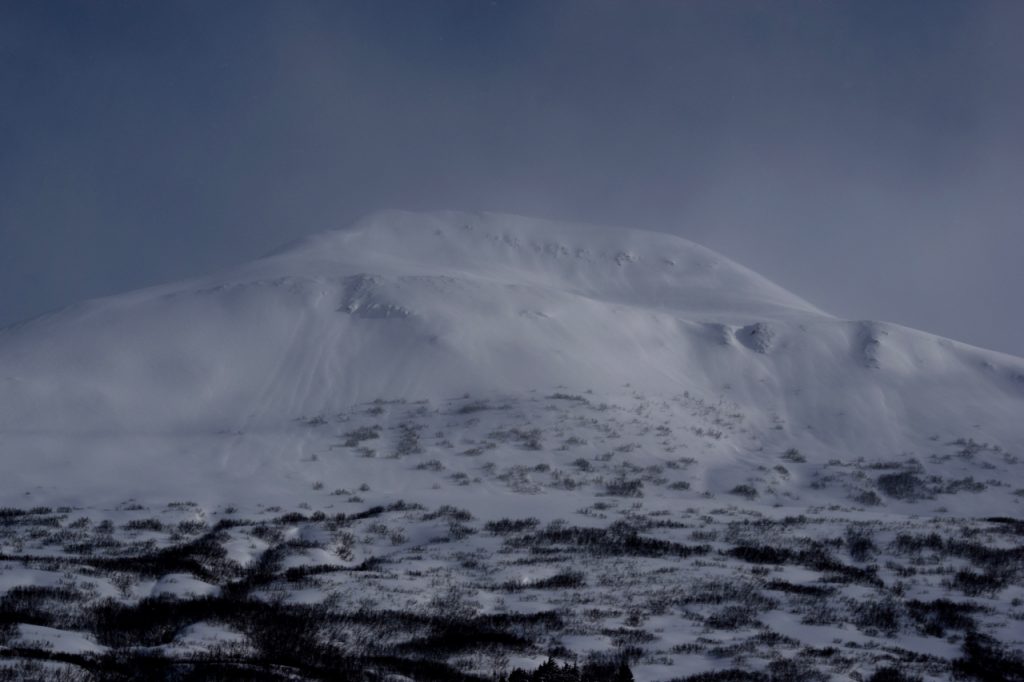 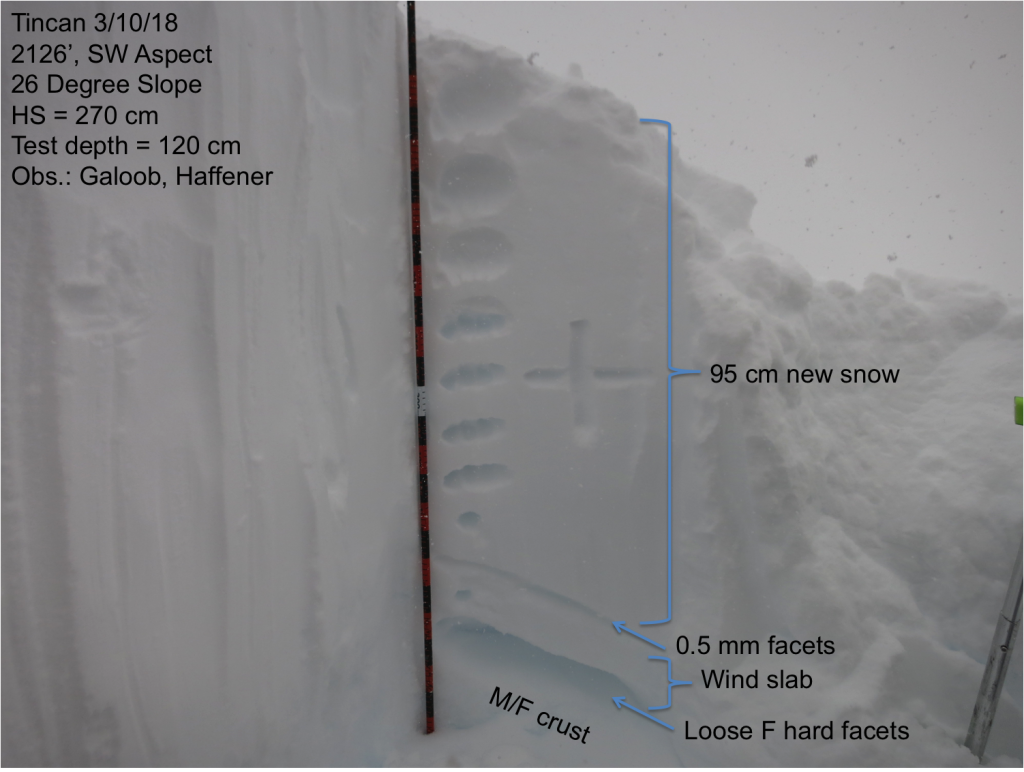 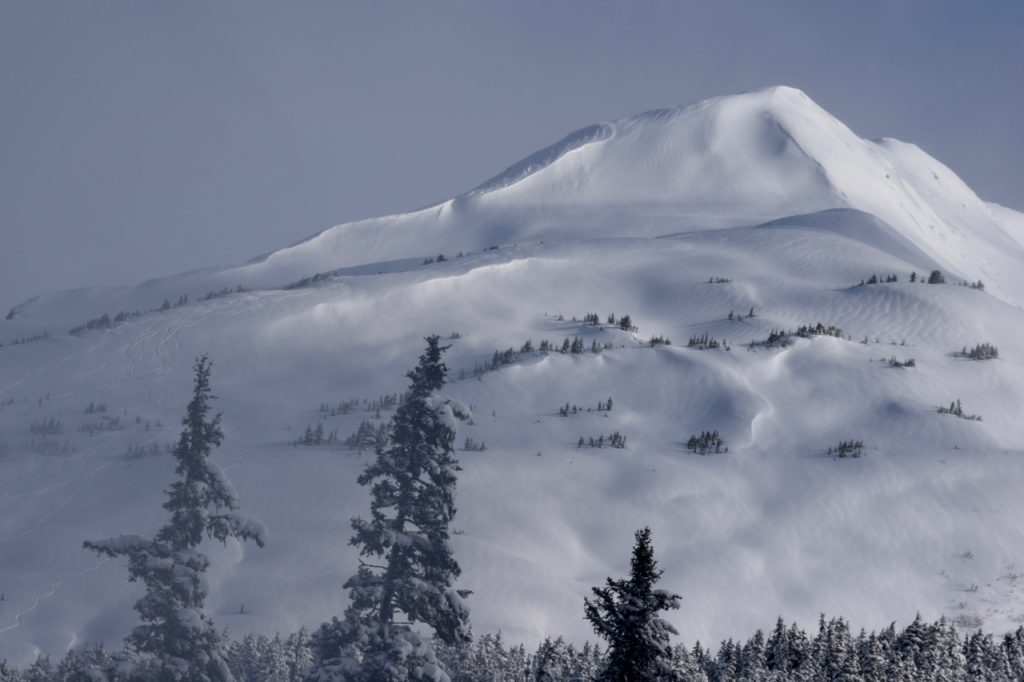 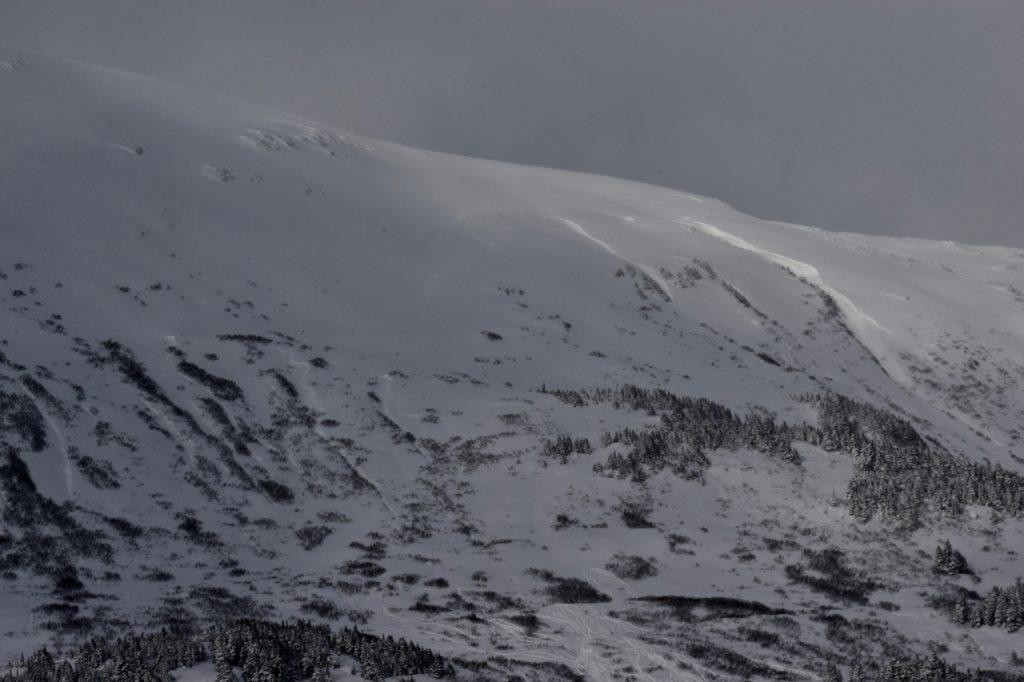 Turnagain Pass flats – plenty of safe places to play that are out of avalanche terrain. (Photo: Allen Garrett) 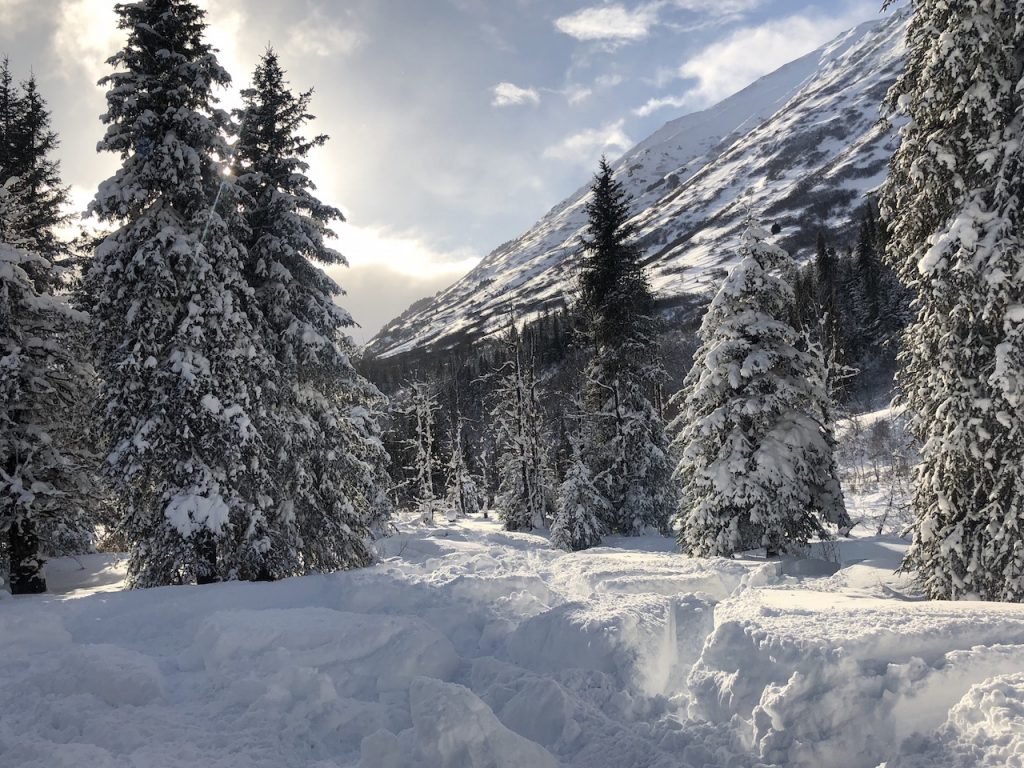 Cornices have grown and are suspect for breaking while traveling along ridgelines. Give these an extra wide berth and minimize any time below them. Cornice falls can trigger avalanches on slopes below.

Yesterday cloudy skies with light snow showers gave way to breaking skies in the afternoon. Total 24-hour accumulation was 2-5″ of low density snow in favored areas and no snow in others. Ridgetop winds were light to moderate from the East (5-20mph). Temperatures were in the mid 30’sF at sea level and in the teens along ridgetops.

For today, Sunday, a low pressure spinning East of us in the Gulf may push some moisture our way. Clear skies this morning are forecast to turn cloudy later today along with a chance that 1-3″ of light snow will fall. Ridgetop winds look to shift to the North and West and stay light (5-10mph) as we are on the back side of the low pressure. Temperatures will remain cool for March, in the mid 30’s again at sea level and teens along ridgetops.

Looking ahead to the work week, Monday another system passes through with a chance for snow followed by clearing and the chance for a nice day on Tuesday. Unsettled weather looks to continue later in the week.

*Seattle Ridge anemometer (wind sensor) rimed over and not reporting