The avalanche danger is expected to rise to HIGH this afternoon in the Alpine due to heavy snowfall and increasing wind.  Pay attention to changing conditions.  The  NWS has issued a Blizzard Warning from Portage Valley to Turnagain Pass. *Travel in avalanche terrain is NOT recommended above treeline and careful snowpack evaluation and cautious route-finding is required below treeline.

This morning there is a CONSIDERABLE  avalanche danger at all elevations above 1,000′ for storm snow avalanches. New snow overnight is landing on a weak surface and soft slab and wind slab avalanches, up to a foot or more thick, are expected to be easy to trigger. Additionally, above 3,000′  large avalanches breaking near the ground may occur due to new snow overloading a poor snowpack structure.  The avalanche danger may rise to  CONSIDERABLE  below 1,000′ where debris from avalanches above may run.

*Dangerous avalanche conditions are expected in the Southern Kenai Mountains (such as, Seward and Lost Lake) due to heavy snowfall.

If you are headed to Hatcher Pass get the Saturday forecast here at  hpavalanche.org.

Join CNFAIC on  Wednesday, January 3rd  from 7pm – 8:30 pm at the Blue & Gold Boardshop  for a discussion on Understanding Weak Layers and the Current Snowpack at Turnagain Pass.

On this last day of 2017, after a 2 week dry spell, snow is falling again in the mountains. The storm is slowly filtering in and is expected to favor the Portage Valley area, as is common, along with the Southern Kenai mountains near Seward. Snowfall rates are around 1/2 inch per hour this morning and so far Girdwood Valley has picked up 6-8″ of snow at the mid and upper elevations and Turnagain Pass around 5-7″ of new snow.

Snowfall is expected to increase through the day. By this evening an additional 10″, and up to 20″, could fall in favored locations. Another 5 – 10″ could fall tonight. This heavy snowfall combined with strong winds will dramatically increase the avalanche danger. In the Alpine, where snowfall and wind are most pronounced, natural avalanches will be expected. Near and below treeline, winds may be less active and soft slab avalanches in the new snow should be expected. The new snow is falling on a weak surface made of facets and surface hoar. This will make it hard for the new snow to stick to the slopes. If you are thinking of heading out today keep these things in mind:

–  Soft storm slab avalanches may be easy to trigger in the trees where over 8″ of snow has fallen
–  Keep a close eye out for how much snow has fallen, perform hand pits to assess the old/new snow bonding, remember the more snow the larger the avalanche
–  Avoid large slopes, their runout zones and know the terrain you are traveling in if choosing to go into the backcountry

–  Wind slab, soft slab and cornice falls are likely to be occurring naturally during the storm in the Alpine, travel in these upper elevations is not recommended
–  Large deep slab avalanches are possible in the Alpine

Photo: near surface facets capped with surface hoar is what is now underneath the new snow. This ‘set up’ will inhibit bonding with the new snow and encourage avalanches during this storm cycle, and possibly beyond. 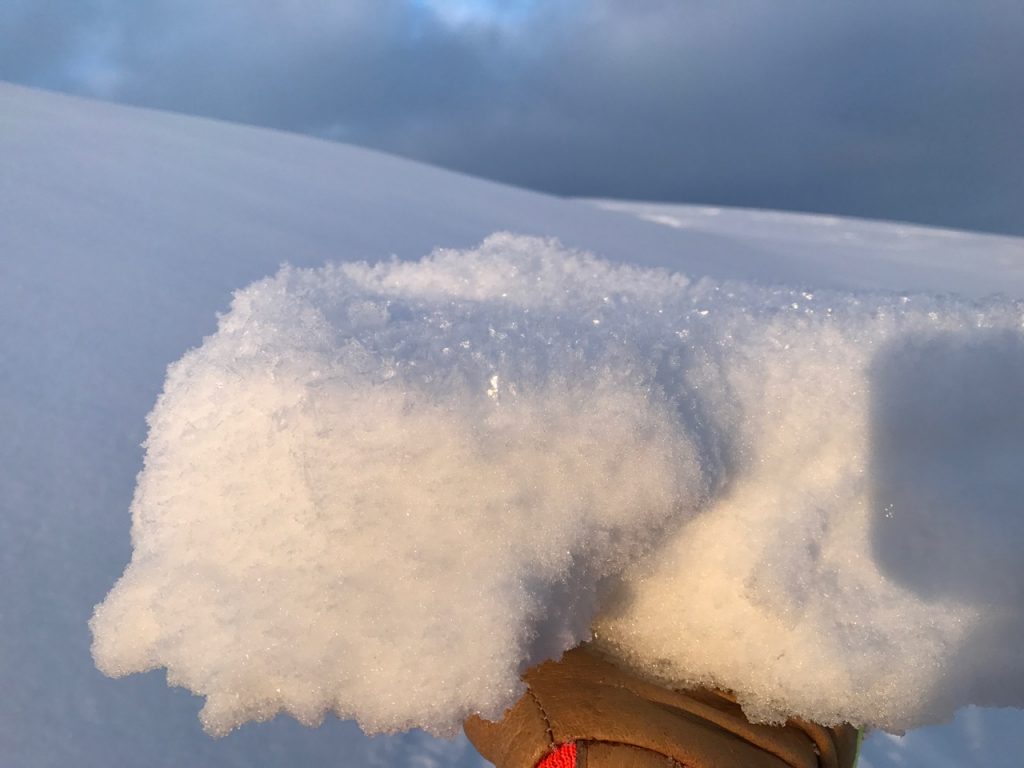 Stormy weather moved in yesterday on Turnagain Pass. Photo is from the top of treeline on Tincan. 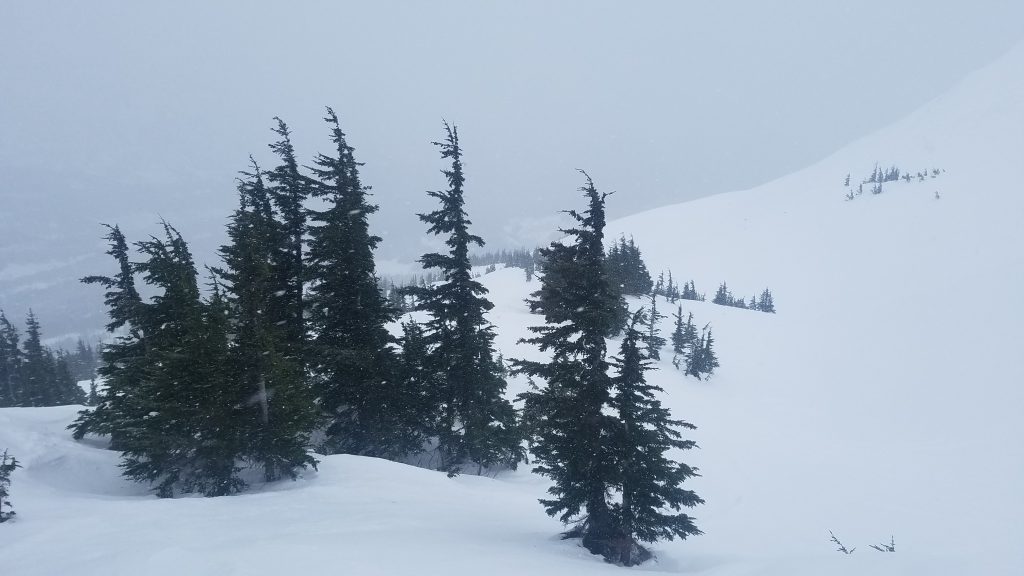 In the alpine, above 3,000’, rapidly loading slopes may awaken a large and dangerous deep slab avalanche. At these elevations, a hard slab, 3-5+ feet thick, is sitting on top of weak sugary snow (basal facets) near the ground. Observations over the last few weeks indicate this poor structure is widespread across our region in the alpine elevations. As new snow increases the load over this snowpack structure during the upcoming storms, there will be the potential for large natural avalanches. Between storms, human triggered deep slab avalanches will be possible. This is a high consequence avalanche problem that is impossible to outsmart and can take a long time to heal. Keep this in mind as breaks between storms may allow for travel to the Alpine.

Overcast skies, light snow flurries and strong winds filled the region yesterday as a low-pressure system moved in. Ridgetop winds have been from a generally Easterly direction and averaging 25-45 mph with gusts up to 89mph. Snowfall has been slow to arrive and as of 6am roughly 5-8″ has fallen at the mid and upper elevations from the Girdwood Valley to Turnagain Pass. Temperatures have risen with the storm and are in the mid 20’sF in the Alpine and near 30F at 1,000′.

Today, the storm is expected to peak with an additional 10-20″ of snowfall (1″ water equivalent) before decreasing tonight (5-10″ forecast and ~.6″ water equivalent). The Easterly winds are expected to continue in the 25-45mph range with stronger gusts. Temperatures should hover in the mid 20’sF in the Alpine and near 30F at 1,000′. Snow should fall to sea level through today and into the New Year.

New Year’s Day another low-pressure moves in on the heels of our current storm. Expect the Easterly ridgetop winds to ramp up during the day along with light snow flurries and overcast skies. Temperatures may begin to rise as well as this storm system is warmer. Stay tuned and keep your fingers crossed that the rain/snow line remains low!