The avalanche danger is expected to rise to CONSIDERABLE late in the day on Sunday and into Monday. Warm temperatures continue to soften the snowpack creating a wet avalanche hazard on all slopes over 35 degrees in steepness. Natural wet avalanches may begin to release as early as this afternoon and are expected to occur on Monday. Steep and rocky slopes with a shallow snowpack are the most suspect for releasing. Human triggered wet slab and wet loose avalanches will be likely on steep slopes that have a wet, saturated and unsupportable snowpack.

Hiking on summer trails during the springtime warm-up (including the Byron Glacier trail, Crow Pass, etc).    Extra caution is advised for trails that cross under avalanche paths. Avalanches possible at the higher elevations could send debris over snow-free hiking trails.

MONDAY APRIL 24th AVALANCHE OUTLOOK:
A CONSIDERABLE avalanche danger is expected for Monday. Increased warm weather conditions will enhance the possibility for natural wet avalanches on all aspects above 1,000′. Please see the discussion below for more details.

During the springtime warm-up and the snowpack melt-down (or shed cycle), there is an ‘old-timer’ rule of thumb. This goes as follows: One can start expecting wet avalanches to begin after three consecutive nights with no re-freeze along the ridgetops. Last night was the second night without a sold re-freeze, and tonight will be the third…..

Although many South and Southeast slopes such as Seattle Ridge have already melted down over the past 2 weeks of sunny weather (meaning significant wet avalanche activity has occurred), there are still West, North and East slopes that remain intact. Westerly and Easterly slopes are theoretically next in line. Will we start seeing the West/East aspects release this week – there is a good chance with the cloudy and warm weather forecast. So what to watch for if headed to the mountains? Is the snowpack frozen or is it mushy and wet? That’s the key.

Cloud cover: Starting last Friday night, cloudy skies have been trapping in the daytime heat and severely limiting the amount of overnight re-freeze. Although the breezy winds have helped combat this, the pack is still loosening up and becoming weaker. This trend is expected to continue with the forecasted warm, cloudy conditions. Aside from the avalanche concern – many folks have been traveling on glaciated terrain – snow bridges over crevasses are sagging and punching through is becoming more likely.

These are the different characters of avalanches that occur with the melt-down or shed cycle during springtime. Things to keep in mind if headed out:

Yesterday, this was the only recent avalanche noted – a small glide on the lower South face of Tincan 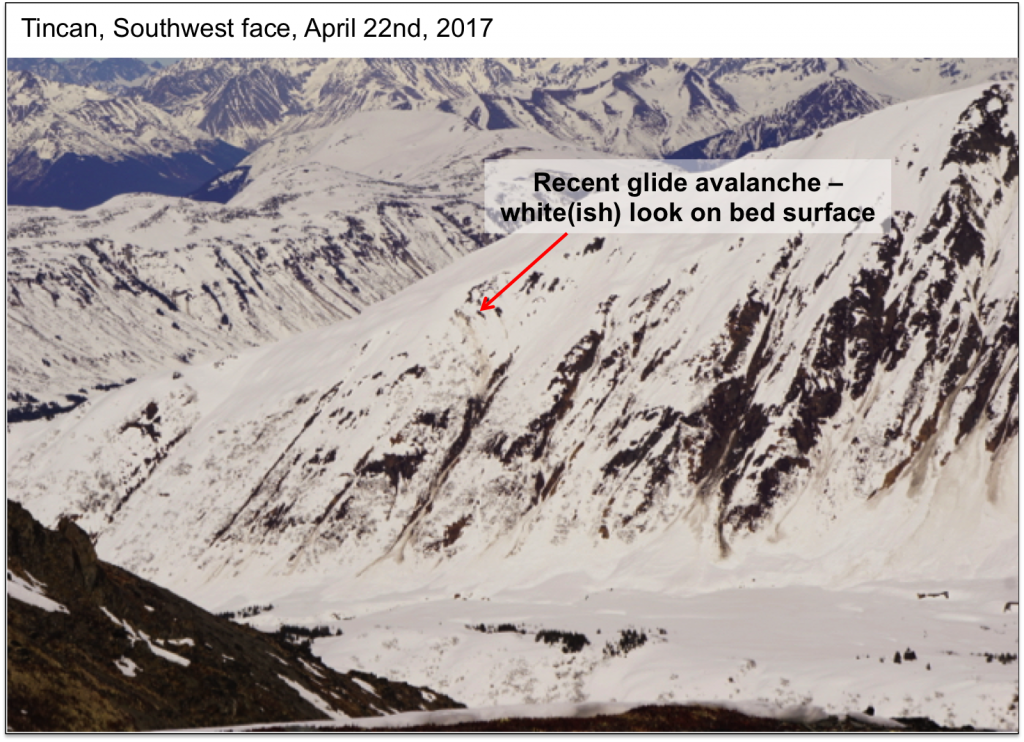 Glide avalanches are still releaseing here and there – we saw one yesterday pictured above. Watch for glide cracks and avoid being under them as they can release at any time. 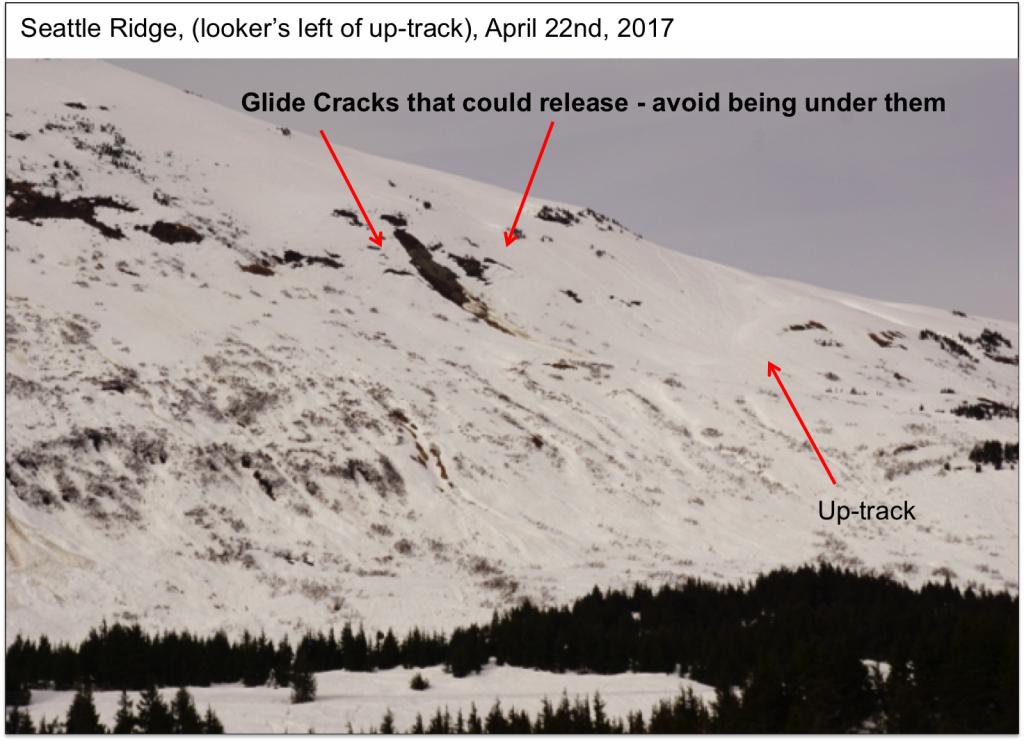 Upper elevation Northerly aspects warmed yesterday enough to moisten the top 4″ at 3,800′. This trend is expected to continue with the forecast warm, cloudy conditions. With the added warmth of the pack in these shaded zones, increased stress on underlying weak layers will be occurring. There are several buried persistent weak layers in the snowpack; ranging from buried surface hoar 2-6′ deep, mid-pack facets and facets near the ground. Shallow snowpack zones such as the Summit Lake area harbor depth hoar near the ground. As the snowpack warms up, these weak layers could re-activate and triggering a slab avalanche is possible. This is a low probability, high consequence problem. Keep these points in mind:

Overcast skies and a breezy East wind were over the area yesterday. Over the past 24-hours, Easterly ridgetop winds have been averaging between 10-20mph with gusts to 30mph. Temperatures were up to 50F below 2,000′ and up to 36F along the 4,000′ ridgelines. All the precipitation, light rain, so far has stayed far to our South.

For Monday: A weak low pressure moves through that will bring a chance for light rain to 2,500′. Temperature and winds are expected to remain very similar to Sunday, the main change being increased chance for light precipitation and thickening cloud cover. A series of small disturbances will continue to move through during the workweek, keeping skies cloudy and temperatures warm.