Hiking in Portage Valley:  Travel along, and past, the designated Byron Glacier trail is not recommended due to exposure to avalanche terrain. Natural avalanches are possible today that could send debris to valley floors.

Skookum Valley is closed to motorized use as of today,  Saturday,  April 1st.  This is an annual closure as per the Chugach National Forest Plan document.  All other motorized areas remain open – see area status on the bottom of this page for more information.

The warm, wet, windy storm continues to impact the advisory area and the message remains the same today. We don’t want to sound like a broken record but these conditions deserve respect. Slabs will likely release naturally in steep terrain and could step down into older layers in some locations. Natural avalanches could run the full length of a slope and it will be extra important to avoid being near any runout zones today. Human triggered avalanches are very likely. Snowmachiners riding near the toe of the Skookum glacier witnessed a large natural avalanche in the afternoon yesterday on a S-SW aspect. Recent natural avalanches were observed along Seattle Ridge and observers reported a lower elevation natural avalanche occurring in the afternoon in Girdwood Valley as temperatures rose. Yesterday winds blew from the SE-ENE 20-30 mph with gusts into the 50s. Winds are forecasted to be similar today, adding to wind slabs and cornices.  Large collapses (whumpfs) were observed near treeline yesterday and very reactive snow was found in snow pits at the same elevation. Snowpack tests were showing instability on the surface hoar buried by this storm cycle and the weak facets that formed during the dry spell (most of March).

How much load is on top of the weak snow (near surface facets, buried surface hoar)? Totals from 3/27-4/1.

Another .65 H2O is forecasted today. More load on an already touchy snowpack! Avoidance of avalanche terrain is the only way to “manage” the avalanche hazard today. 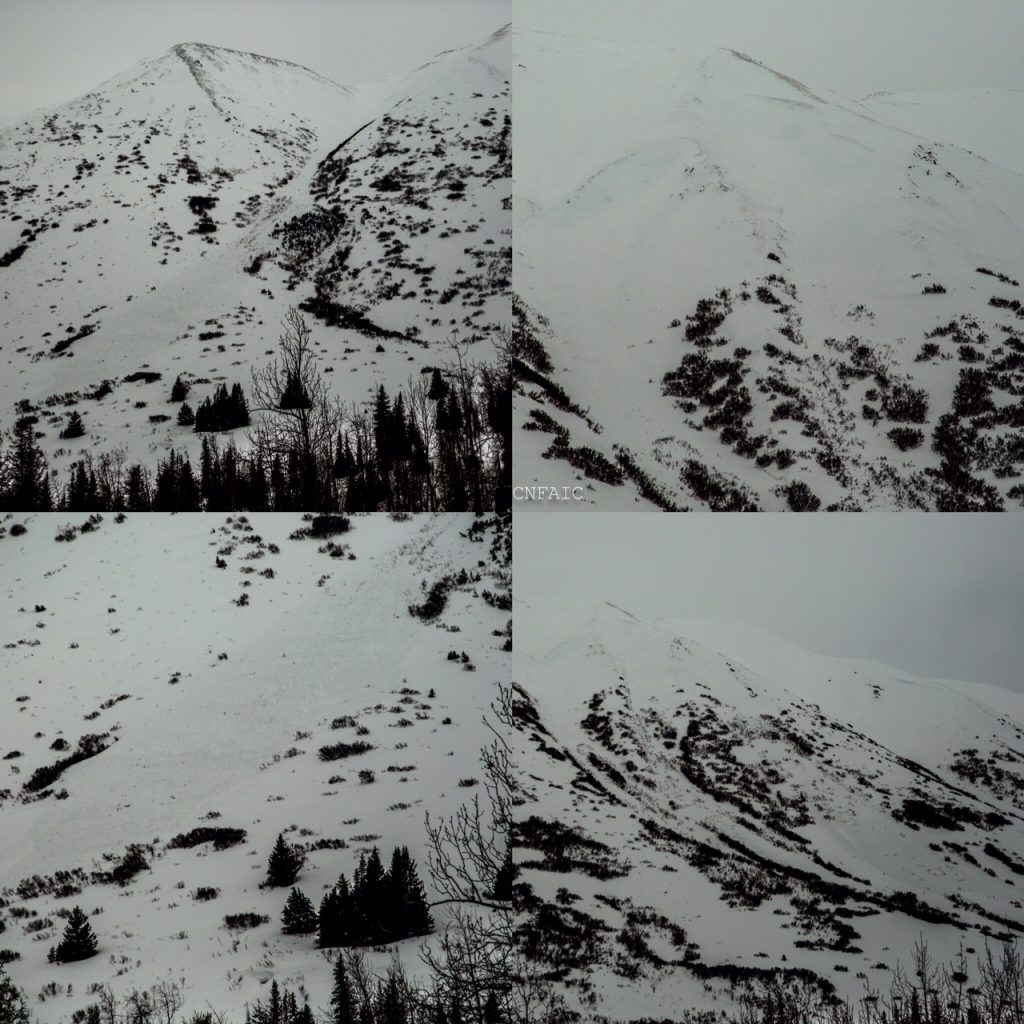 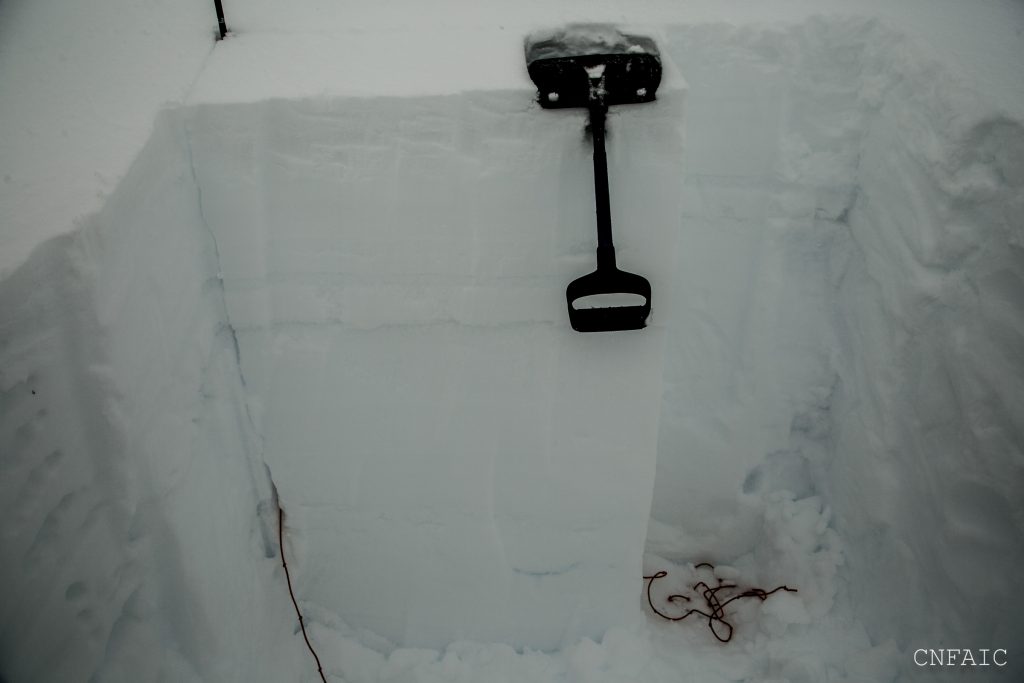 Facets that formed during the March high pressure were the the weak layer failing in the snowpack tests. 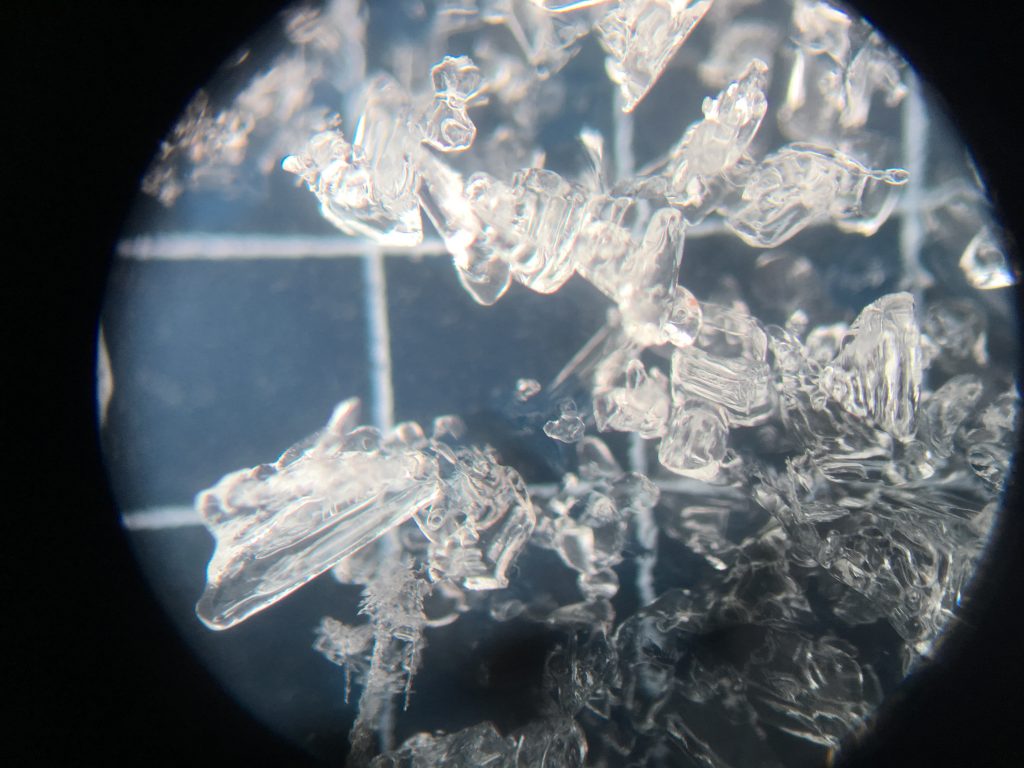 Rain fell up to around 1800′ yesterday, mid elevation temperatures stayed above freezing for 24 hours and more rain is forecasted today. The rain/snow line is forecasted to remain around 1800′.  Roller balls and wet loose activity were observed at lower elevations yesterday. The snow surface is becoming more saturated as rain falls. Over a half an inch of water forecasted to fall today. This combined with temperatures in the 40Fs will keep wet loose activity likely and combo of wet/dry slab avalanches possible due to water interacting with dry snow, buried crusts and weak layers. Any sun making it through the clouds will add more heat to surface snow and promote melting. In channeled terrain an avalanche from above will likely entrain wet/damp snow in the lower elevations increasing overall volume. Again it will be important to avoid steep terrain and maintain a conservative distance from all runout zones.

Don’t forget that our snowpack harbors several old layers of weak snow (near surface facets and surface hoar). Avalanches releasing in the storm snow have the potential to ‘step down’ into these layers. As the load increases as the new snow piles up and begins to stick to the old snow surface, avalanches breaking into the older, deeper layers is possible. Both of these situations can create a much larger avalanche – something to keep in mind as the storm cycle continues this weekend. Snowpack tests yesterday showed propagation potential in old layers. The question is how much incremental loading will tip the balance?

Snow pit yesterday at 1550′ on a NW aspect showing multiple old weak layers (both buried surface hoar and near surface facets) that are still reactive. 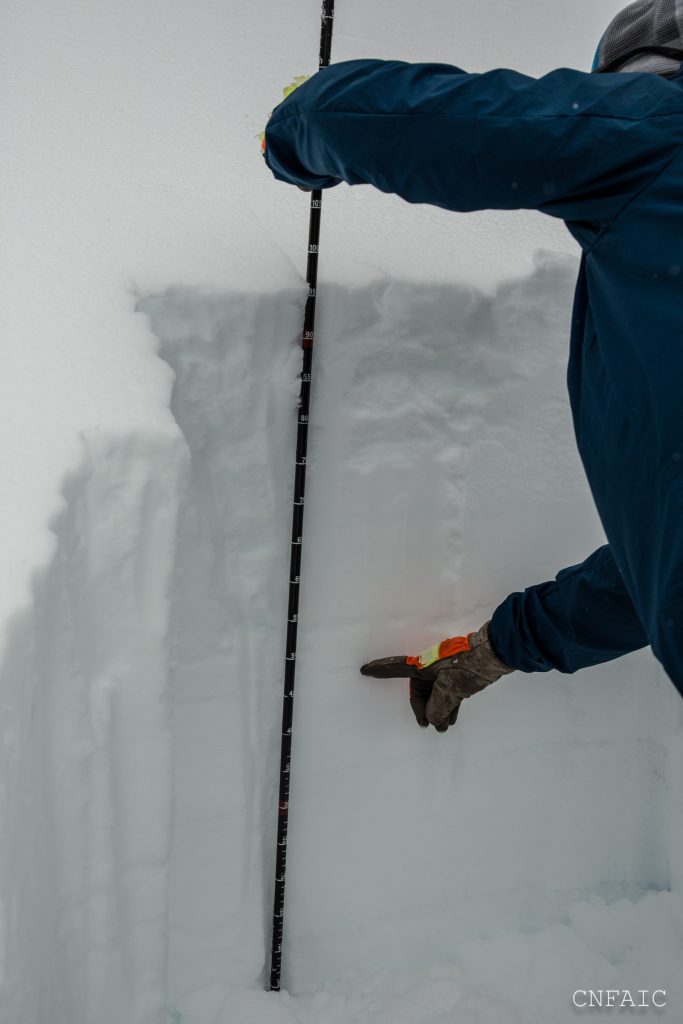 Yesterday was cloudy and the ceiling lifted on and off throughout the day. There were rain and snow showers with a few additional inches of snow accumulating at higher elevations. Winds continued from the ENE-SE blowing 20-30 mph gusting into the 50s. Rain/snowline fluctuated around 1800′. Temperatures rose to above 40F at low and mid elevations. Ridgetops saw mid to high 20Fs. Overnight temperatures stayed above freezing at mid elevations.

Today is forecasted to be almost identical with a little heavier precipitation.  Tonight will cool down slightly and winds will diminish. Tomorrow there is hope for those who still want winter in the NWS discussion, “As the upper low moves inland on Sunday, southwesterly cold  air advection will help to drag snow levels back down towards sea  level.”  The pattern remains active into the week.  Stay tuned!

*Seattle Ridge rimed up after 1 pm yesterday. No wind data after that time.