A  LOW  avalanche danger remains in the backcountry  at all elevations. Although triggering an avalanche is unlikely, it is still possible on steep wind loaded features similar to wind slab triggered yesterday on a SE aspect of Seattle Ridge.  Surface warming on East-through-Southwest-facing slopes due to radiation from the sun could make triggering an old wind slab or wet loose avalanche easier in the afternoon. Be aware of old hard wind slabs and dry sluff in steep terrain, as well as large cornices. Glide cracks continue to open – limiting exposure under these is recommended.

Remember that good travel habits remain important, even during ‘green light conditions’. This includes exposing only one person at a time on a slope, watching your partners closely and having an escape route planned in case the snow moves.

Summit Lake, South of Johnson Pass and North (in parts of the Girdwood Valley):  A reminder that the snowpack remains thinner in these areas with a poor structure. The chance for triggering an avalanche that breaks in the old weak layers is unlikely but not impossible. Read the Saturday Summit SummaryHERE.

“Even though avalanche conditions are low right now, doesn’t mean they can’t happen. ” Words of wisdom from a snowmachiner who triggered a wind slab on a SE aspect of Seattle Ridge, near God’s Country yesterday. While side-hilling a steep wind loaded feature a slow moving slab broke about 15’ above just after the rider cleared the slide path. The crown was estimated between 12-18” deep and hard chunks of debris came to stop on the gentler slope below. This avalanche happened around 12:30pm on an aspect susceptible to solar warming. Although there were no reports of wet loose avalanches or roller ball activity, Southerly surfaces were warming up yesterday. Even subtle surface warming can make wind slabs more susceptible to triggering. Steeper slope angles and slopes with rocks exposed will be most suspect. Light winds today are expected to keep surfaces cooler, but pay attention for damp surface snow. Soft snow still sits on many slopes and roller balls could occur in these areas and a there is chance of shallow wet loose avalanche activity. Things to keep in mind if you are headed to the mountains to enjoy these long sunny days:

Wind Slabs: Old and hard winds slabs are easy to find but for the most part they are locked into place. Be suspect of smooth pillowed snow on steep features or in rocky areas, where they are not supported from below. Solar warming could make it easier for someone to pop one out.

Loose Snow Avalanches (Sluffs): Watch your sluff. Dry sluffs on steep slopes are probable and have been fast moving this week. And, as mentioned above, wet loose (or damp) sluffs, both natural and human triggered, may occur.

Glide Avalanches: Glide cracks continue to slowly open above popular terrain on Seattle Ridge and in other areas of the advisory area. These could release at any time, watch for these cracks and avoid being under them.

Cornices: Cornices may start to loosen with the warming – as always, give these monsters a wide berth from above and limit exposure time traveling underneath.

Persistent Slabs and Deep Slabs: There are various weak layers in our thin snowpack. Buried surface hoar sits 1-3+’ below the surface and faceted snow sits in the mid and base of the pack. These weak layers with varying degrees of strength are in a dormant stage due to plenty of time to adjust with a lack of changing weather. Although this means the layers are not producing avalanches, it doesn’t mean an outlier can’t occur which could cause a large avalanche breaking deeper in the pack.

The rider reported being just below the trees on the left side of the photo when the avalanche released. No one was caught. Photo by Brian Bird 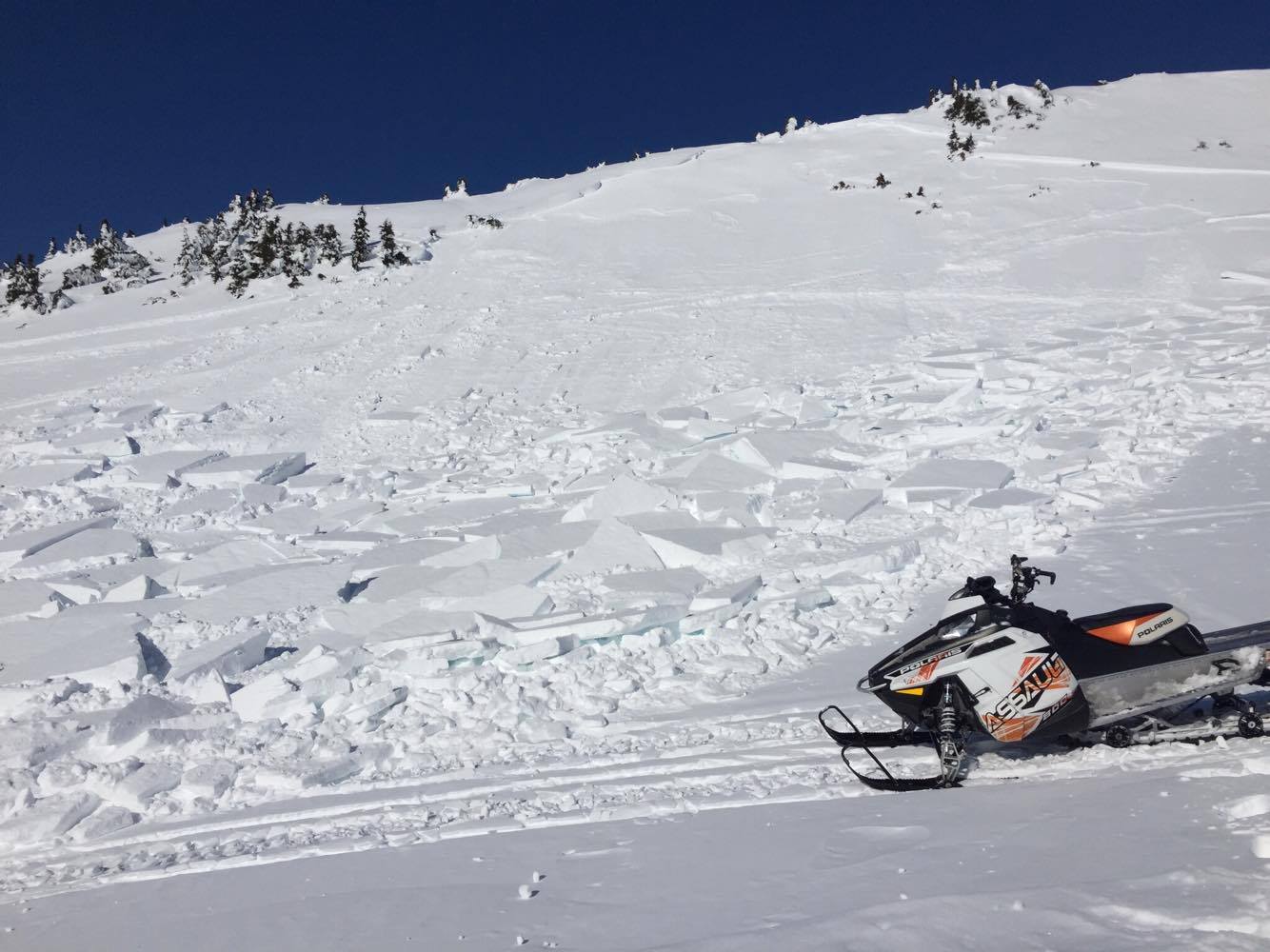 A view of the slide from the Seward Hwy on a SE aspect of Seattle Ridge near God’s Country. 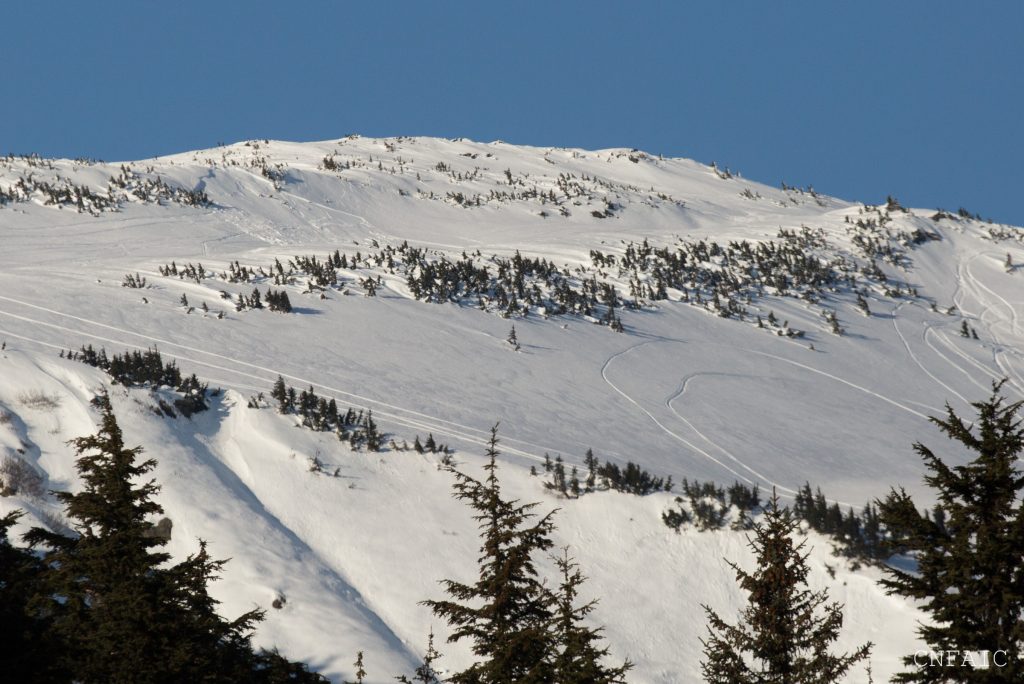 Yesterday skies were clear and sunny. Temperatures averaging in the teens F increased into the low 20F’s mid day in the alpine. At lower elevations there were a few hours where temperature reached 30F at Center Ridge weather station. Winds were light and variable. Overnight temperatures dropped back into the low teens F.

Today a similar pattern is expected. Temperatures in the teens F may reach the mid 20F’s by mid day.   Winds are expected to be calm in the morning increasing to 5-15mph from the North by early afternoon. This evening North winds may bump into the 15-25mph range.

A high pressure over mainland Alaska will continue to dominate our weather this coming week. There is a chance of cloud cover and light flurries as early as Wednesday, but nothing to get too excited about at this time.