A LOW  avalanche danger remains in the backcountry  at all elevations. Although this means triggering an avalanche is unlikely, it is not impossible and concerns are: triggering an old hard wind slab in steep rocky terrain, loose snow sluffs on steep slopes with soft snow and cornice falls. The glide cracks on Seattle Ridge continue to open – these can release at any time and limiting exposure under them is recommended.

Remember that good travel habits remain important, even during ‘green light conditions’. This includes exposing only one person at a time on a slope, watching your partners closely and having an escape route planned in case the snow moves.

There will be an Alaska State Trooper Helicopter in the Turnagain Pass area this afternoon and tomorrow afternoon conducting avalanche rescue training operations.

Another day of brilliant sunny skies and cold temperatures is on tap – Marvelous March. Winds are slated to remain mostly light, possibly getting up to moderate (15mph) along some ridgelines from the North. It is that time of year where longer days can be had in the backcountry. As we often say at times of low avalanche danger, Low doesn’t mean No. And this should remain in the minds of all of us getting out into the steep terrain. Snow is a complex thing and it seems once we let our guard down, something happens. So, keep up your safe travel habits and always watch for changes in the snowpack as well as weather. Below are the ‘Normal Caution’ concerns that underscore the current green conditions:

Glide Avalanches:
Glide cracks continue to slowly open above popular terrain on Seattle Ridge and in other areas of the advisory area. These could release at any time, watch for these cracks and avoid being under them, photo below.

Wind Slabs:
Old and hard winds slabs are easy to find but for the most part they are locked into place. Steep rocky areas, where they are not supported from below, will be the most suspect zones for someone to pop one out. These areas are also where slabs are likely sitting on weak faceted snow. Even a small wind slab can have big consequences if a person is knocked over cliffs or down steep terrain. Watch for hard snow over weak loose snow as well as shooting cracks and whumphing noises.

Loose Snow (Sluffs):
Watch your sluff. Dry sluffs on steep slopes are probable and are getting larger by the day. Althought many steep South slopes have a sun crust, a slight change in aspect still sports soft snow and sluff concerns.

Cornices:
Cornices should always be given a wide berth from above and limit exposure time traveling underneath.

Persistent Slabs and Deep Slabs:
There are various weak layers in our thin snowpack. Buried surface hoar sits 1-3+’ below the surface and faceted snow sits in the mid and base of the pack. These weak layers with varying degrees of strength are in a dormant stage due to plenty of time to adjust with a lack of chaging weather. Although this means the layers are not producing avalanches, it doesn’t mean an outlier can’t occur which could cause a large avalanche breaking deeper in the pack.

Opening glide crack to the looker’s left of the snowmachine up-track on Seattle Ridge (apologize for poor image quality, but hopefully you get the idea). 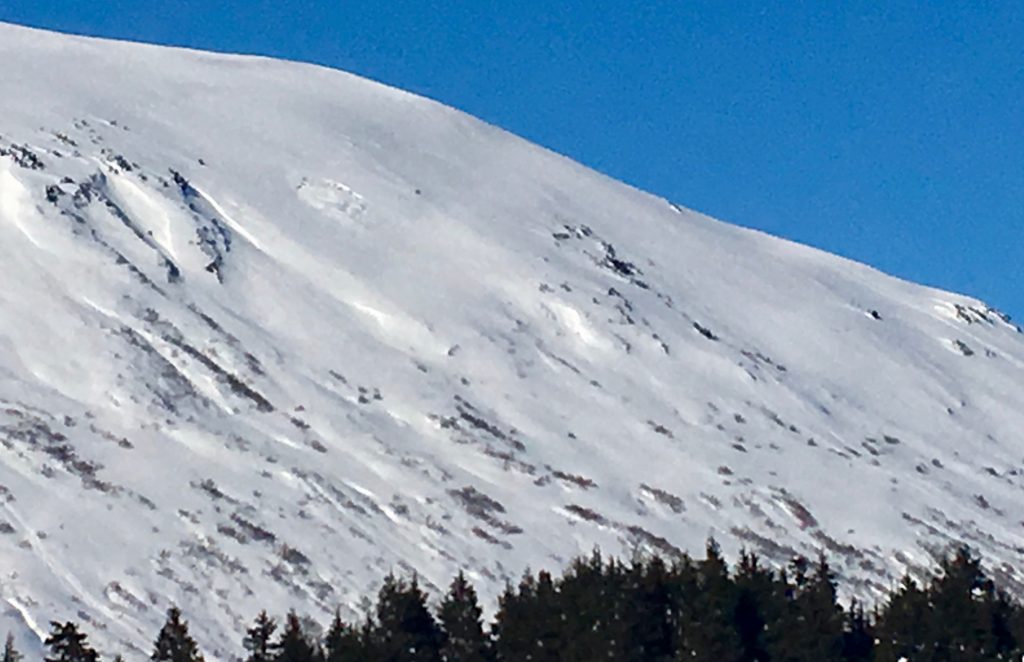 Sunny skies were again over the region. Ridgetop winds bumped up slightly yesterday, up to 10-15mph from the North and West. Temperatures were cold again, starting off at all elevations in the single digits and warming into the teens and lower 20’sF at the lower elevations. Portage is reading -10F this morning, burrr.

Sunny and cold weather will dominate again today. Daytime warming should let the unseasonably cold temperatures warm up into the teens and 20’sF in the lower elevations. Ridgetop winds are expected to be in the 5-15mph range with stronger gusts from the North. Winds could increase to 20-25mph by tonight.

The impressive blocking high-pressure bringing these cold and clear conditions looks to remain entrenched over us into the early part of next week.