Girdwood Valley:  Slabs have the potential to be larger due to more snow that has fallen on a weaker snowpack compared to Turnagain Pass. Avalanches were running to the ground during the storm.

As we got a few patches of visibility over the past two days we have been able to see evidence of the natural avalanche cycle that occurred during the storm and were reminded of the variability of the snowpack across the advisory area. In Girdwood Valley some avalanches were running to the ground on basal facets that formed early in the season. A similar weak layer is also the suspected culprit in a number of large avalanches that ran in the gullys at the southern end of Seattle Ridge.  At lower elevations in Turnagain Pass there were signs that avalanches were running on the January 13th layer of buried surface hoar. All these persistent weak layers still need time to adjust to the heavy load they received and could be triggered today. Shallow areas in the snowpack will be the most likely trigger spots. Be on the lookout for cracking and collapsing and areas where you can feel weak snow below strong snow. Do not overload steep slopes with multiple skiers or snowmachines on the slope at the same time!

Yesterday at lower elevations it was easy to find the rain/snow line around 1400′. Water had formed two layers below the surface that were slowly cooling and may have formed crusts overnight. If these are solid today the likelyhood of triggering the January 13th buried surface hoar will go down. If the upper snowpack is still wet, persistent slabs may still be possible.

Seattle Ridge South, both the gully and the face slid. Road obs yesterday showed that most of the gullys in this area slid and some made it all the way to the creek. 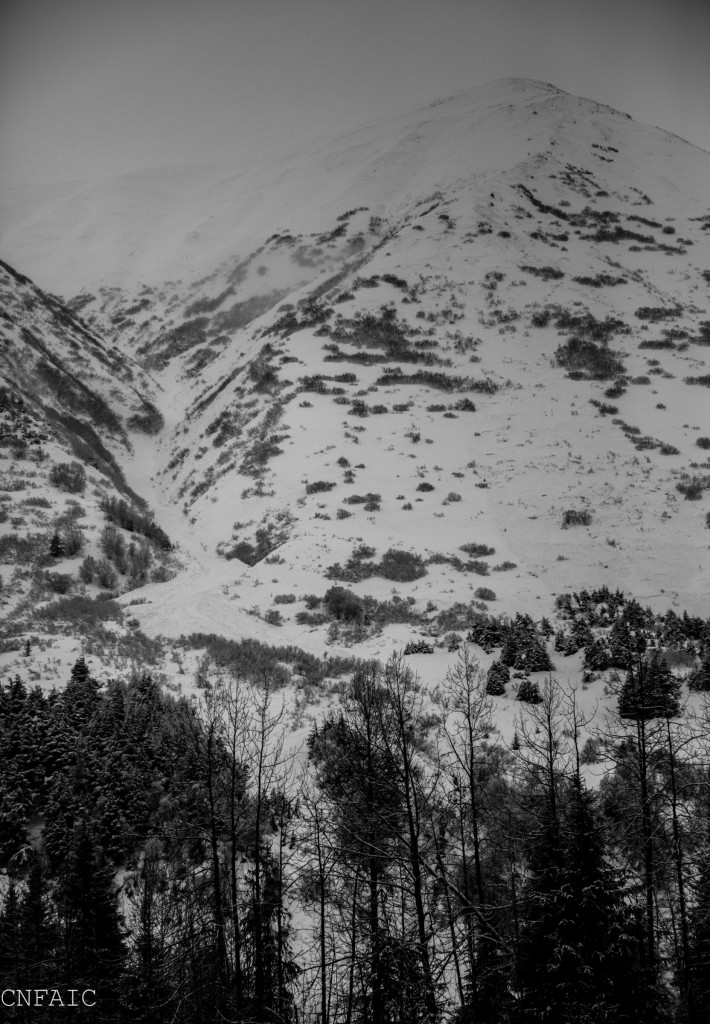 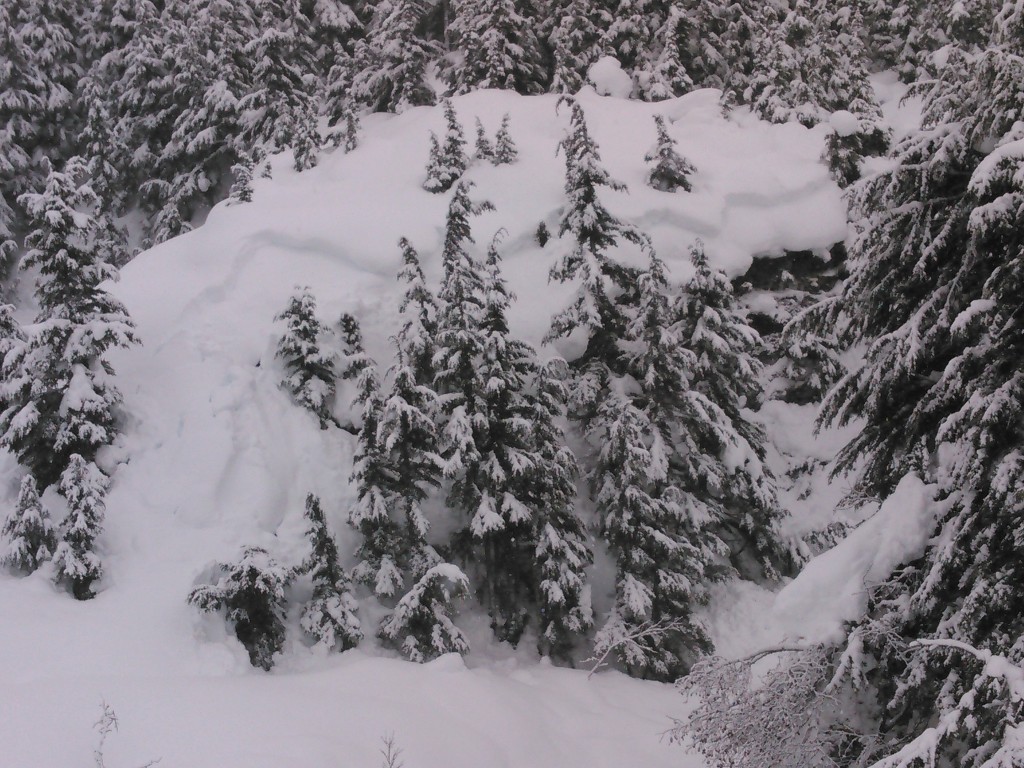 Snowpit on Tincan at 1100′, shows the layers of wet snow and the January 13th buried surface hoar 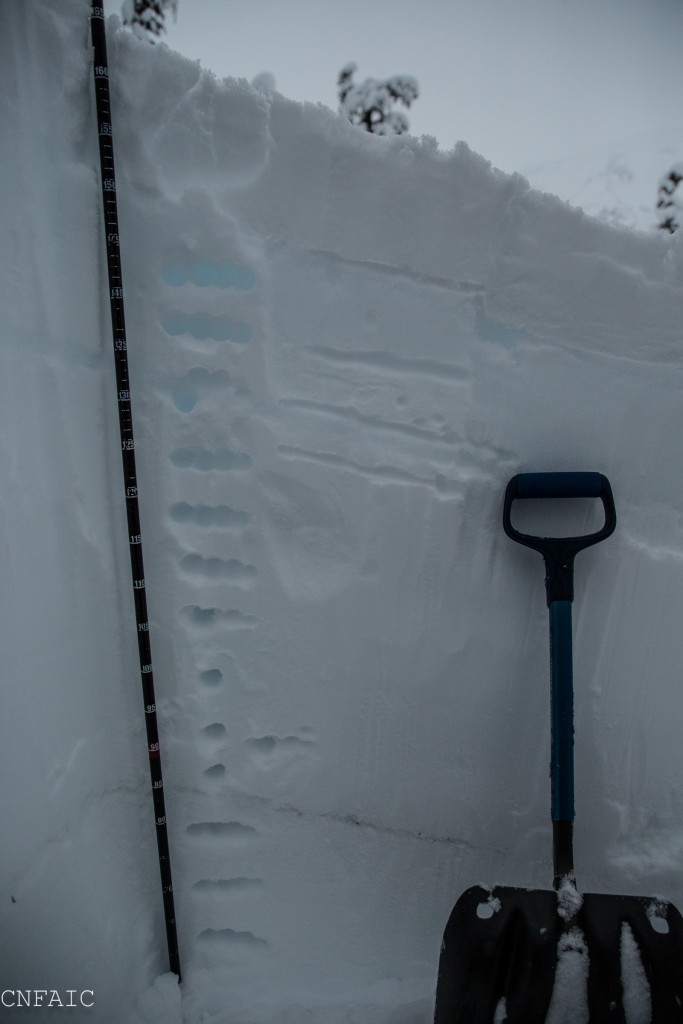 Strong easterly winds during the storm quickly moved snow, loaded slopes and triggered natural avalanches. Probing around a minor ridge yesterday showed that the winds had definitely redistributed snow. The windward side had less than a meter of snow and leeward side had over 2 meters. There was wind features in all of the Alpine terrain that was visible. Today wind slabs 2-3′ thick are likely on steep leeward slopes. It will be important to look for pillowed or drifted areas and watch for shooting cracks. These slabs may allow you get out onto them before they break. There is still snow available for transport today and the winds are shifting to the west. Pay attention to changing conditions if you see blowing snow and slopes being actively loaded.

Warm wet snow and strong winds are notorious for cornice growing. We have had limited visibility into the Alpine but suspect they will be looming over much of the leeward terrain. Give cornices wide berth, avoid travel on slopes below and remember they can break farther back onto the ridge than expected.  If they do break and fall they could trigger an avalanche on the slope below.

Yesterday was mostly cloudy with snow showers throughout the day. Easterly winds were light with a slight uptick in the evening with gusts in the 20s. Temperatures were in the 30s at valley bottoms and 20s at ridge tops. There was a slight cooling trend overnight.

Today will remain cloudy with snow showers forecasted throughout the day. Accumulations will be minimal. Temperatures will be slightly cooler than yesterday. Winds will be westerly 10-20 with gusts into the 30s. Snow showers diminish overnight but cloudy skies and a chance of snow remains through the weekend.