There remains a MODERATE avalanche danger in the mountains surrounding Turnagain Pass for triggering a slab avalanche 1-2′ thick. The most suspect slopes are those that are steep, in areas less traveled and have a ‘stiff’ feel to the snow underfoot. Additionally, watch for new/old wind slabs in steep rocky terrain that could release, knocking you off your feet. On slopes that are well traveled and all areas below treeline, the danger is LOW for triggering an avalanche.

*Ice climbers: Please let us know if you see any avalanche activity in the Portage Valley. Although natural avalanches are not expected to occur in the terrain above climbs today or into the weekend, there has been more snow and wind here than in other areas.

Mark your calendar for next week’s  Fireside Chat: Avalanche Awareness and Rescue  w/CNFAIC in Girdwood!!
December 15 @ 6:30 pm – 8:00 pm FREE.  Join CNFAIC forecasters for an evening of avalanche awareness with a focus on recognizing obvious clues to instability and companion rescue.

**Planning on taking an avalanche class? The Friends of the CNFAIC is offering two avalanche scholarships through the Rob Hammel fund. Both scholarships are for $500. One is for avalanche professionals and the other is open to anyone!  The deadline for both scholarships is Dec 15th! For more information click this link  HERE.

The snowpack in and around Turnagain Pass is tired, stiff and needs a good re-fresh. A little snow did fall last night, a trace in some places with 1-2″ in others. With a sunny day ahead, keep in mind that we are still concerned about a weak layer 1-2′ below the surface. This is the notorious Nov 16th buried surface hoar (image below). Although we have not seen an avalanche release in this layer for almost a week, there are many slopes away from the ‘popular’ zones that have yet to be tested. These are the areas most suspect.

The good news is, with time triggering an avalanche becomes less and less likely. During the past couple weeks the slab above the weak layer has been ‘faceting‘ away with the cold temperatures. This process turns the slab into loose unconsolidated snow and removes it from the equation; a ‘slab’ is a necessary ingredient for a slab avalanche. The other side of the coin is where the winds have formed new slabs over the weak layer. These are the areas to be most concerned about and look for if you head into the more remote zones. To be clear, we know that most of the high traffic slopes folks have been skiing/riding avalanched weeks ago and have been filled back in, this is why those slopes are generally stable. A tricky situation when heading for fresh lines in the back bowls! 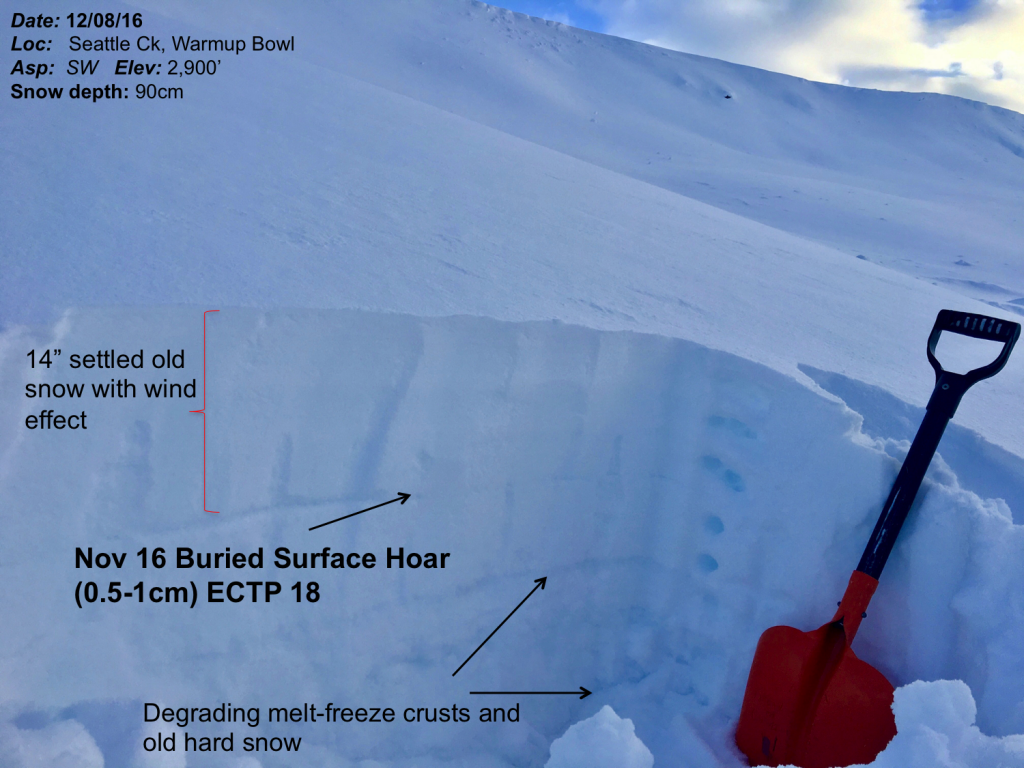 There is a significant amount of wind affected snow out in the mountains and on our favorite slopes. Ridgelines sport wind slabs, wind crusts, scoured areas that are covered by an inch or two of fluffy new snow. That said, there are still many pockets of sheltered soft settled powder that can be found.

Watch for fresh shallow wind drifted snow today. We saw drifts along Seattle Ridge yesterday and although they were touchy, they were too small to affect a person. In areas with more snow and wind, the slabs could be large enough to knock you off your feet. The most concerning aspect is getting on a wind slab that breaks deeper in the pack in the buried surface hoar. Older wind slabs are stubborn but a person could still pop one out on steep rocky terrain where slabs have no support from below. 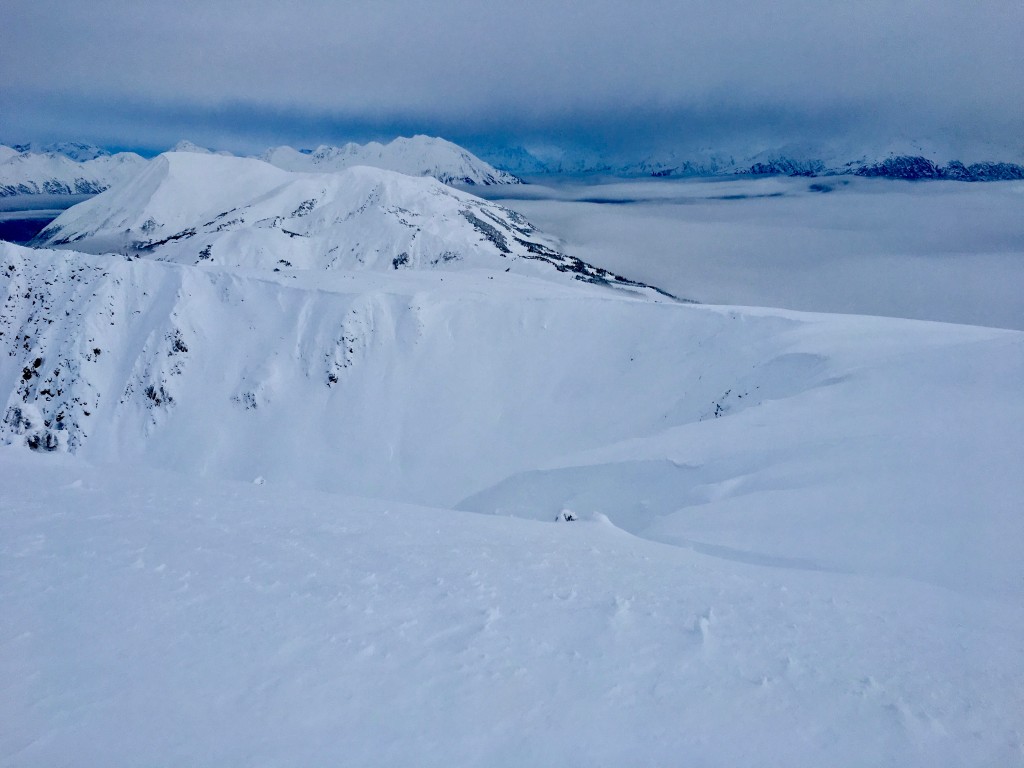 Mostly cloudy and obscured skies filled the region yesterday. Temperatures remain civilized and in the 20’s F at most locations. Winds were gusty from the North along the ridgelines yesterday, averaging 5-10mph with gusts to 25mph. No precipitation.

Overnight, a trace to an inch of very light snow has fallen. Ridgetop winds quieted down and were light with stronger gusts from a Northerly direction. Clouds are moving out this morning and skies are clearing with chances for more snow leaving with them.

A ‘blocking’ high pressure will continue to dominate Alaska’s weather and clear skies with little to no chance for precipitation is forecast for the weekend and into Monday.