The avalanche danger is  CONSIDERABLE below 2500′ due to a continued pattern of warm temperatures and an active glide avalanche cycle. Glide cracks have been releasing daily and without warning, and travel is not recommended in terrain with existing glide cracks (including the uptrack on the motorized side of Turnagain Pass.) Human triggered wet-loose avalanches will be possible on slopes steeper than 35 degrees and will be more likely later in the day with warming temperatures.

In the Alpine, above 2500′, a generally LOW avalanche danger exists. LOW danger does not mean NO danger €“ Be aware of your exposure in steep terrain and give large cornice extra space €“ these features should never be trusted.

*ATTENTION HIKERS: Summer use trails with avalanche terrain above should be avoided due to avalanche activity from above. Byron trail in Portage Valley and Crow Pass are two examples of trails not recommended right now.

Glide cracks continue to be actively releasing in popular terrain throughout our region including recent activity on Repeat Offender (photo below). Travel underneath existing glide cracks is a total gamble. The zone above and around the popular motorized up-track on Seattle Ridge continues to have our hackles up. This well traveled slope is hanging in the balance (pictured below). Although much of the snowpack has already avalanched along Seattle Ridge, there is still a lot of snow that could release. There was no overnight freeze in the 1000-2000′ elevation band and there is the possibility of rain today. These weather factors may increase glide activity.

Due to the dangerous and destructive power of even a small glide avalanche, we are recommending that people do not travel in avalanche terrain (including runout zones) on the motorized side of Turnagain Pass (West Side). Glide avalanche hazard also exists on the non-motorized side of Turnagain Pass. Travel underneath existing glide cracks is not recommended; if you were to be in the wrong place at the wrong time getting caught up in a glide avalanche would not be survivable.

Flat light and distance make it hard to see small cracks that have formed in the rocks directly above the up-track, looker right side of the photo. 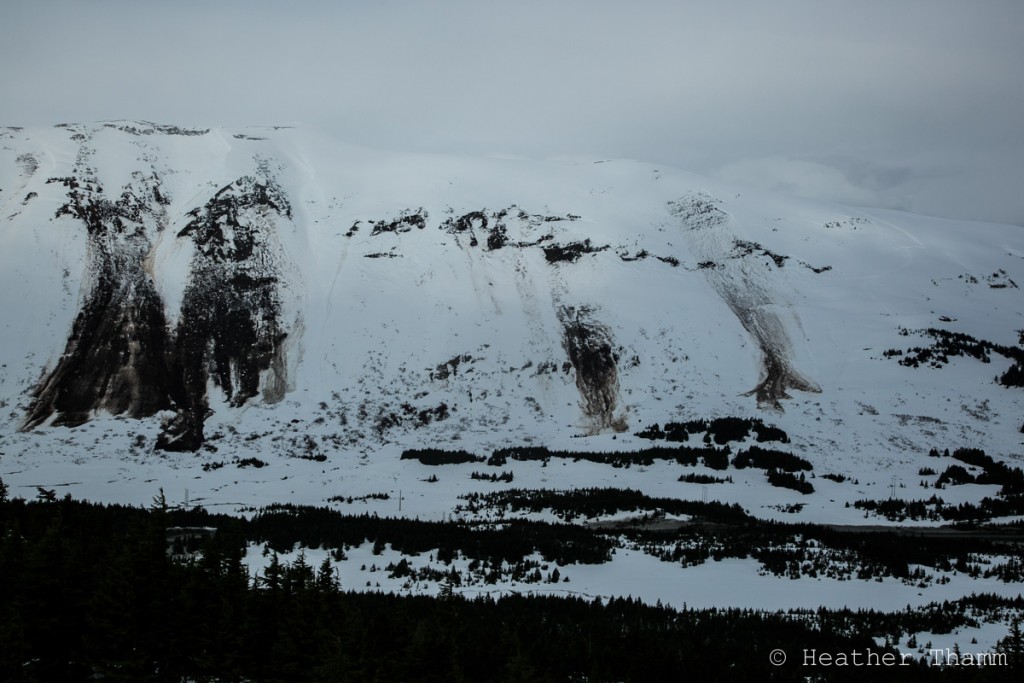 A small glide release was observed on Repeat Offender last night with the DOT web camera just after 7pm. Before and after pictures below. 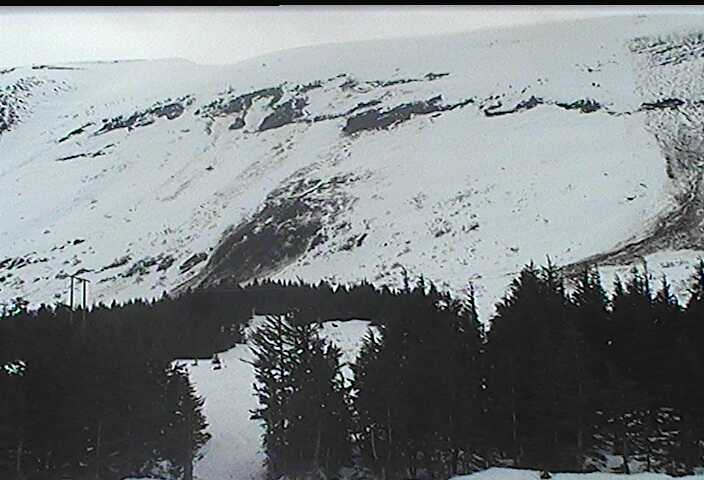 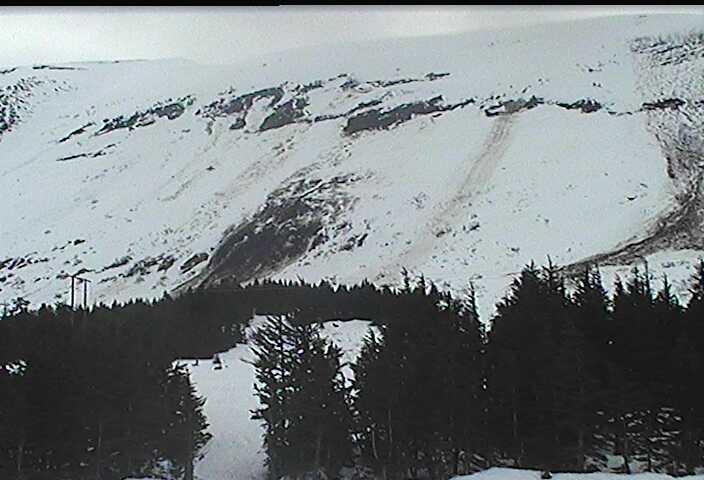 Below 2000’ we have seen multiple days without freezing temperatures and yesterday’s sun left the snowpack wet and saturated in the mid elevation zone. This combined with the possibility of rain will up the likelihood and potential for human triggered wet loose avalanches today. If the snow becomes unsupportable and your skis/snowmachine start sinking into punchy wet snow, this is an obvious sign the snow is loosing its strength. Remember wet loose avalanches can be hard to escape once initiated and particularly hazardous if they push you into a terrain trap.

Skier triggered rollerballs were easy to initiate by 3pm in the mid elevation zone yesterday. This was on a small slope of about 35 degrees. 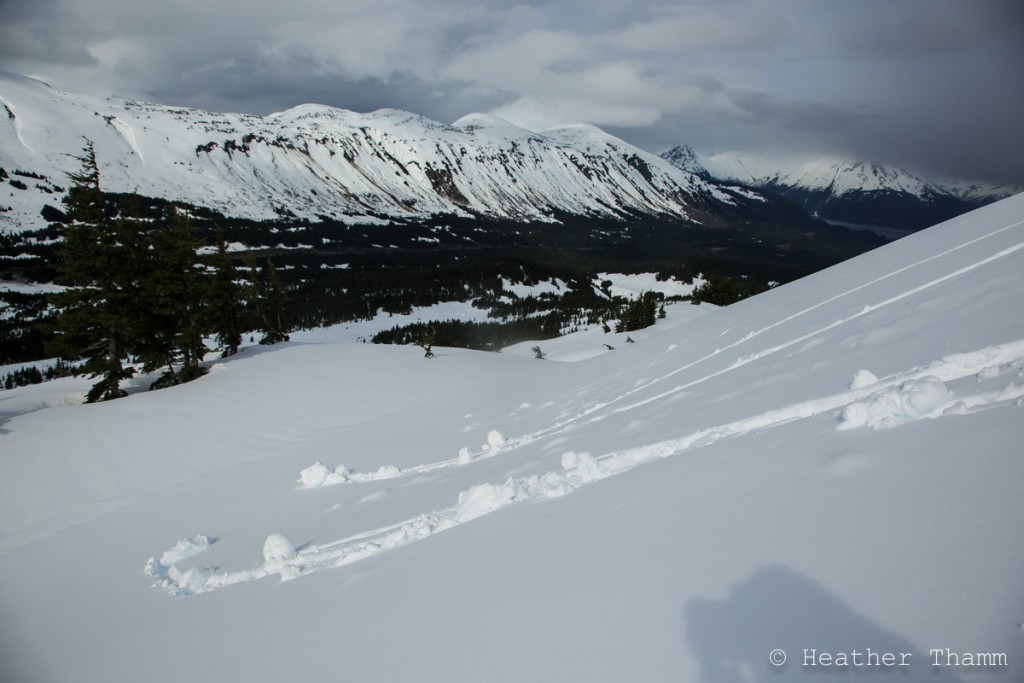 Today it will be important to be aware of terrain features that could harbor isolated instabilities in the Apline, above 2500′. Cornices remain large and warm daytime temperatures will be adding additional stress. Give them extra space and remember they have a tendency to break much further back than expected. On shaded aspects triggering an old wind slab will be especially dangerous in high consequence terrain. Ease into steep terrain with caution and be aware features (rocks and cliffs) where taking a fall would be undesired.

Yesterday skies were partly to mostly cloudy with periods of sunshine throughout the day. At Center Ridge Weather station (1880′) daytime temperatures remained warm with a high of 47F mid-day and overnight temperatures hovering just above freezing level (33F.) Ridgetop winds were light from the East and a trace of precipitation (0.1 €) was recorded overnight.

Light scattered showers are expected throughout the day with mostly cloudy skis. This will be in the form of rain below 2500′, around 0.1 € of (snow water equivalent.) Light Ridgetop winds, 5-15mph, will be from the East.  Daytime highs for 1000′ will be in the mid 40F’s again and overnight lows in the mid 30F’s.

A similar pattern is expected again on Friday, but with a higher chance of rain/snow showers.