In the Alpine the avalanche danger is  MODERATE.  Human triggered wind slabs are possible on leeward slopes and cornices remain a hazard along ridgelines.

Glide avalanches remain our primary concern as they continue to release in areas we recreate. The most concerning zone is Seattle Ridge and the popular motorized up-track. This well traveled slope is hanging in the balance (pictured below). Although much of the snowpack has already avalanched along Seattle Ridge, there is still more to come… Due to the dangerous and destructive power of even a small glide avalanche, we are recommending that people do not travel in avalanche terrain (including runout zones) on the motorized side of Turnagain Pass (West Side). Glide avalanche hazard also exists on the non-motorized slide of Turnagain Pass. Travel underneath existing glide cracks is not recommended. In addition, be on the lookout for new glide cracks forming.

New glide avalanche activity (from the past 24-hours) includes Max’s South face, and two on Easterly facing slopes in the Summit Lake area.

Photo: Max’s Southerly face – this glide released mid-slope and you can see a crack to the looker’s left that is prime to release: 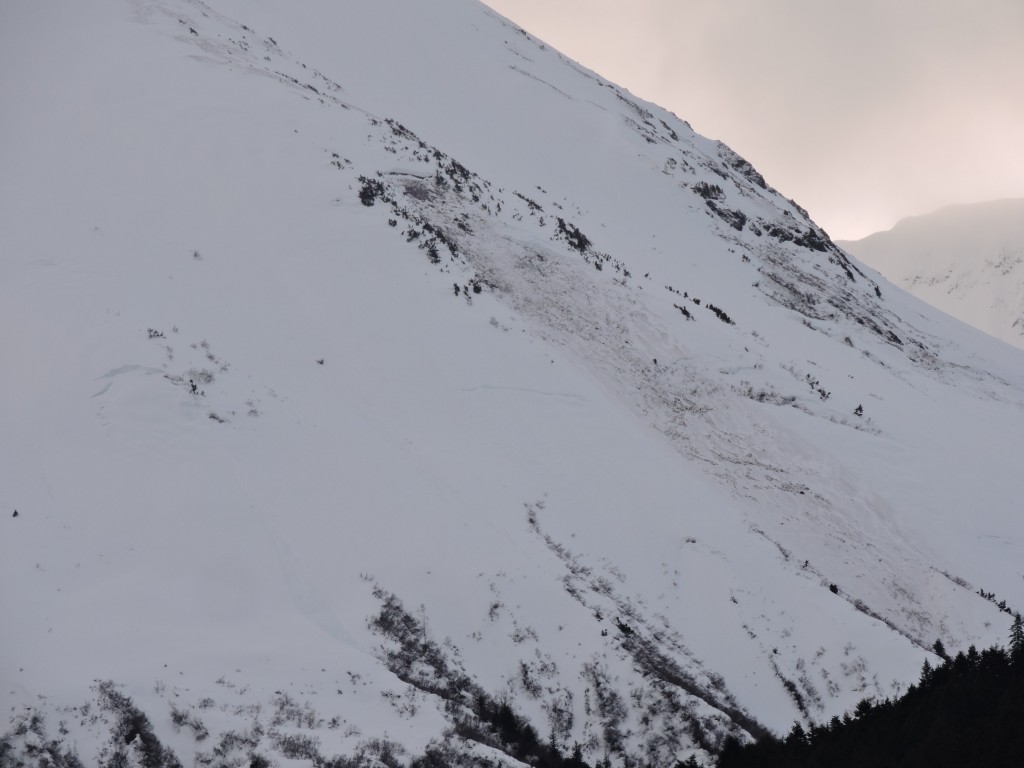 Photo: Summit Lake fresh glide avalanche. There is little snow on these slopes but they still clearly pose a threat! 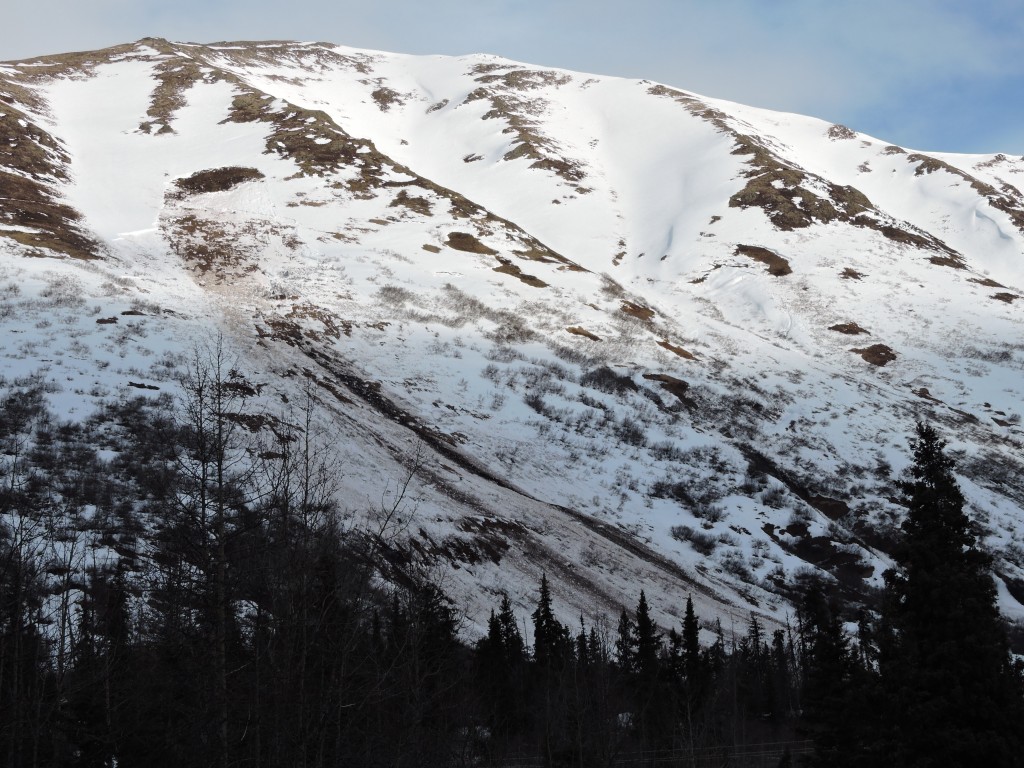 Seattle Ridge Glide Activity:
Although visibility was poor yesterday it looks as though no new glide avalanches occurred. We should be able to see these as they create such brown streaks and dirty debris piles. However, there may have been new wet snow avalanches considering it was difficult to see white(ish) debris. 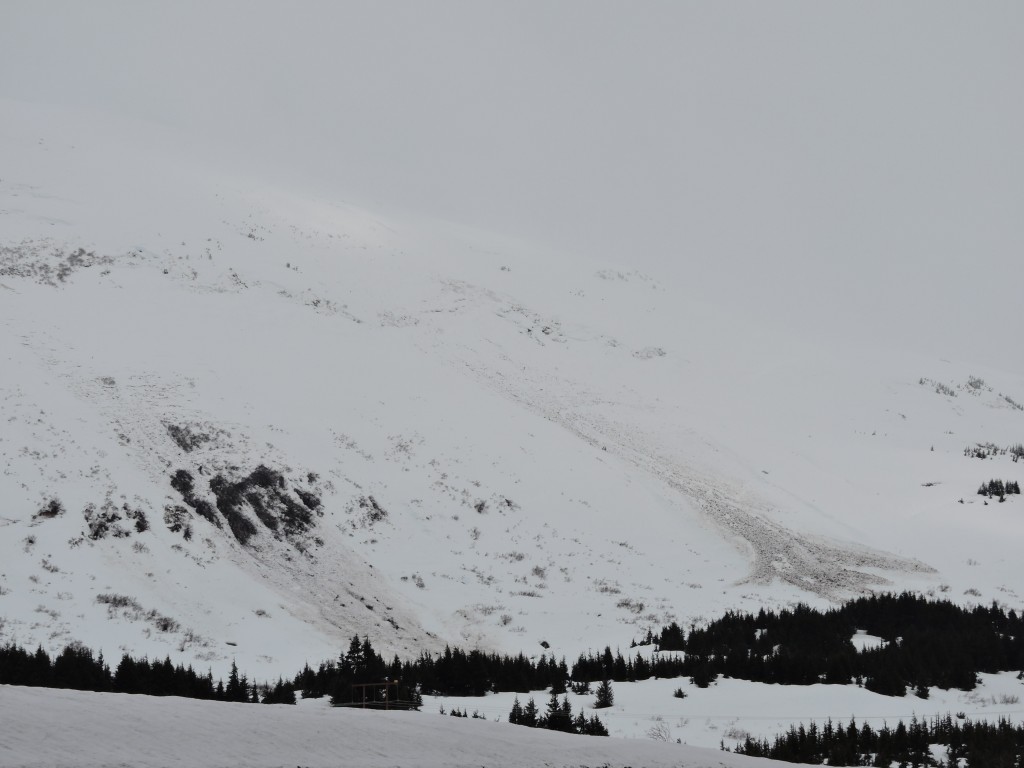 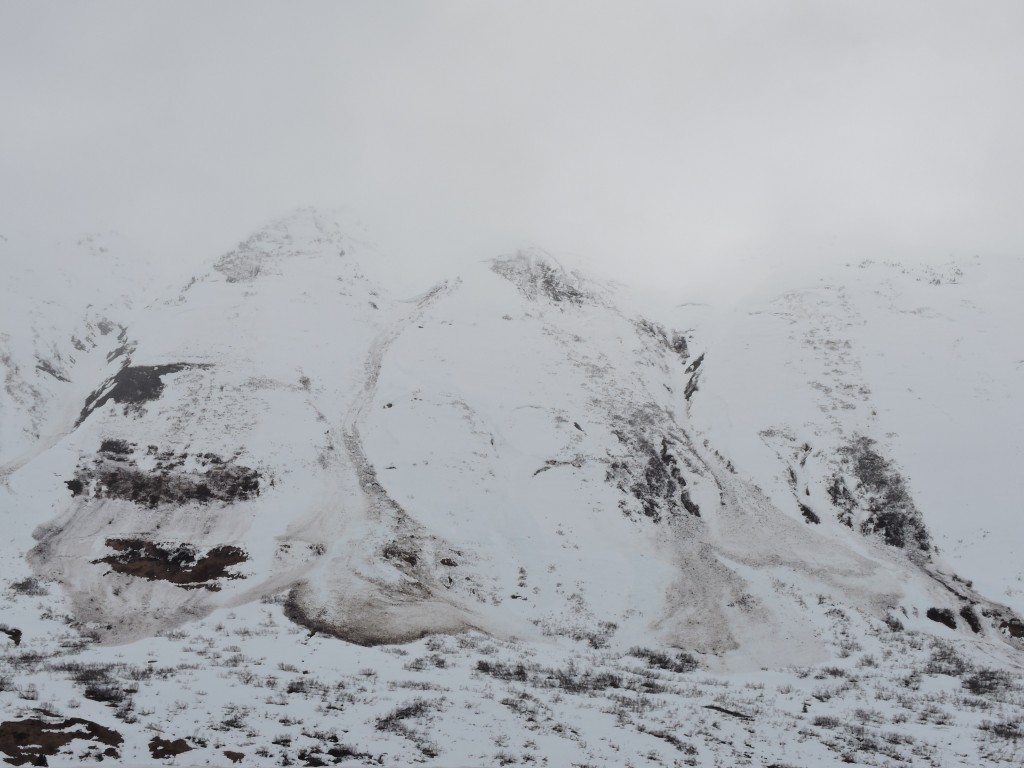 As temperatures rise today watch for any superficial re-freeze of the snow surface to soften; if the sun pokes through this will speed up the process dramatically. How much re-freeze occurred last night is tough to tell as the cloud cover was in and out (clear skies overnight can re-freeze the surface even in temperatures are as warm as 40F….due to longwave radiation loss). If you find yourself on a steep slope with saturated wet snow then triggering a wet loose avalanche, or push-a-lanche, in steep terrain will be possible.

At the uppermost elevations, where dry snow exists, watch for lingering wind slabs on steep leeward slopes. These areas are in the 3,500′ range and higher. Also, cornices could start falling any day now with these warm temperatures and limiting time under them as well as giving them a wide berth is recommended.

Partly cloudy to obscured skies filled the region yesterday. Light precipitation fell along Turnagain Pass adding up to 2″ of new snow above 2,500′ and .2″ of rain below. Ridgetop winds were averaging in the 10-15mph range with gusts to 40mph from the East at the Sunburst weather station.

Today, we should see clouds move in with a chance for breaks in cloud cover here and there through the day. No precipitation is expected and temperatures are slated to be warm…..up to 45F at 1,000′ and 35F on the ridgetops. Ridgetop winds are expected to be ~10mph from a generally Easterly direction.

Looking forward to Wednesday and later this week, we remain in an unsettled weather pattern as a series of low-pressure systems spin to our South in the Gulf shooting moisture our way.