If you are headed into the mountains today, expert level terrain management and observation skills are key to steer clear of glide cracks, steep slopes with saturated snow and slopes with recent storm snow.

As a warm band of moisture moves through the region we contine to see rain between 2,000′ and 2,500′ and wet snow above this. So far total rainfall during the storm (beginning early yesterday morning) is around 1 to 2″ in the Girdwood and Portage Valley areas – lesser amounts have been seen on Turnagain Pass and South. We have another .5-.75″ of rain on the way today with snow up high.

Although we are seeing a storm moving through, the main concern will remain focused on glide avalanches. Two new glide cracks released yesterday in the Turnagain Pass region. One (pictured below) was on the South side of Seattle Ridge and the other was on the North face of Sharks Fin. The fact these cracks keep releasing into avalanches should be evidence enough that avoiding travel under glide cracks remains a prudent rule. 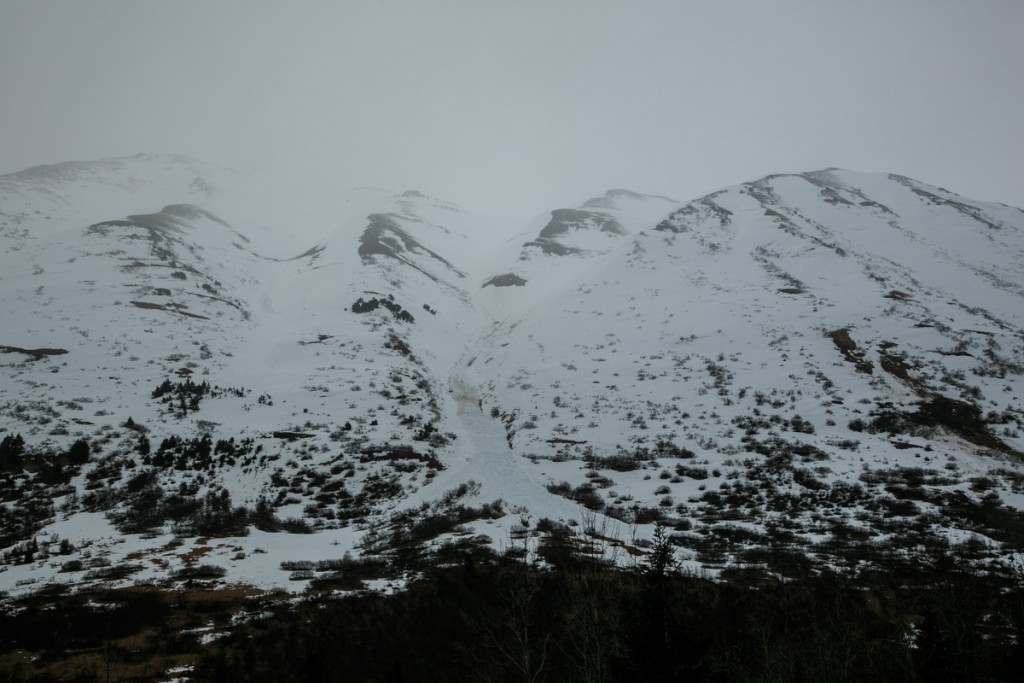 Keeping an eye on the Seattle Ridge ‘up-track’. The last glide avalanche threathening this popular zone was on Thursday, April 7th. 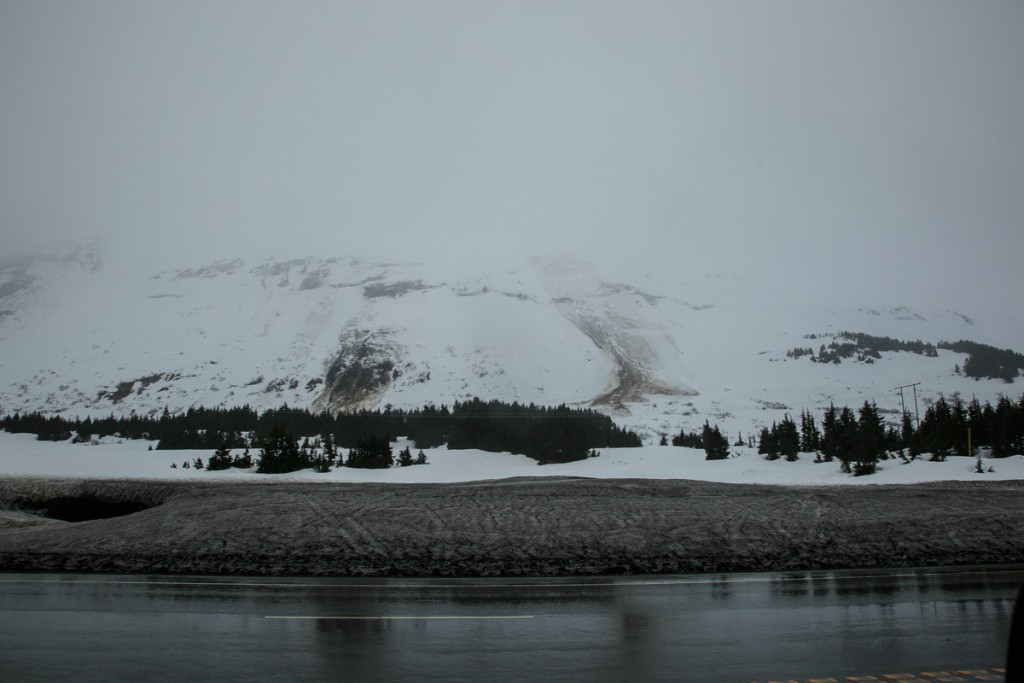 As rain continues to melt and saturate the snowpack from 2,500′ and below, wet loose snow avalanches are a concern. At these elevations, triggering wet snow sluffs on steep slopes is likely – if one were to travel on steep slopes in this weather. At the elevation band between 2,500 and 3,000′ where wet snow is falling, shallow wet sluffs composed of the new snow are likely to occur naturally. We have not seen the typical springtime large wet avalanches that are compose of the older snow yet, but are watching for this.

Saturated and mostly unsupportable snow exists at the lower and mid-elevations along Turnagain Pass. This photo is near the Sunburst parking lot at 900′ in elevation. 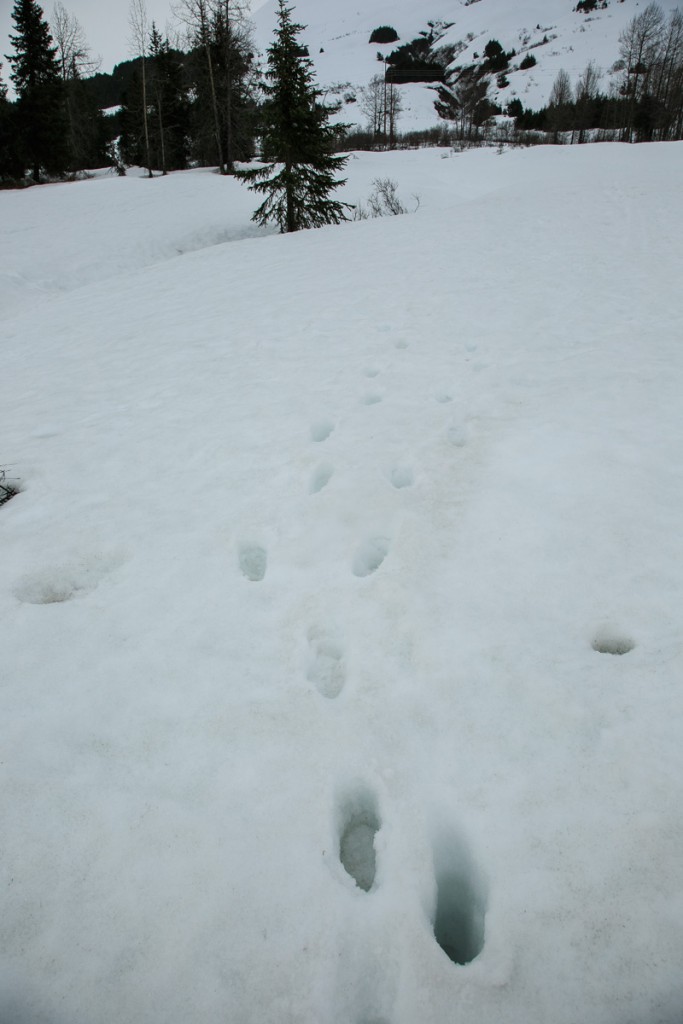 Rain and warm weather is melting the snow out quickly along the South end of Turnagain Pass. Photo is of the Sunburst parking lot looking West toward Seattle Ridge. 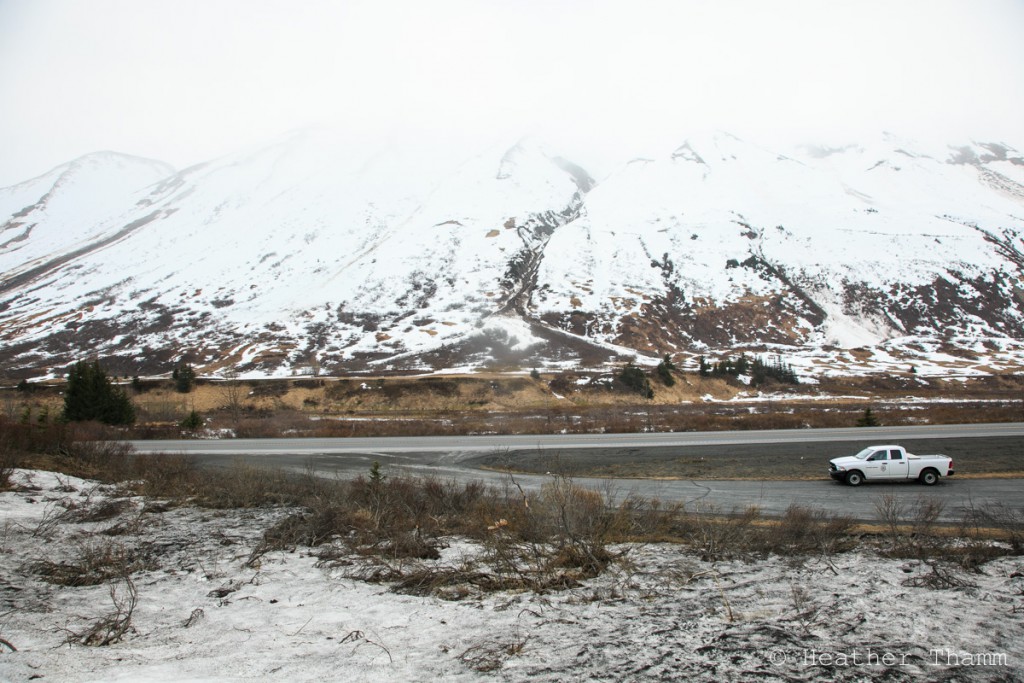 Additional Concern
Storm Slabs
Storm Slab avalanches are the release of a cohesive layer (a slab) of new snow that breaks within new snow or on the old snow surface. Storm-slabs typically last between a few hours and few days (following snowfall). Storm-slabs that form over a persistent weak layer (surface hoar, depth hoar, or near-surface facets) may be termed Persistent Slabs or may develop into Persistent Slabs.
More info at Avalanche.org

At elevations high enough to see dry(ish) snow, storm snow instabilities will be seen. At what elevations will this be? Likely above 3,000′ and in the upper sections of the starting zones along Turnagain Pass. As of this morning there could be anywhere between 6-16+” of snow that has fallen, the most in areas close to Turnagain Arm (Between Girdwood and Tincan). We are looking at another 3-7″ today. With the high winds at these upper elevations, wind slabs 1-2′ thick are likely and could release naturally. Cornice falls are also an issue. both these types of avalanches could entrain wet snow on the way down and run quite far in steep channeled terrain.

A strong frontal system moving through the region has brought rain, up to 2,500, beginning early yesterday morning. Heavy rain fell in Girdwood and as far South as Tincan but only light rain was seen South of the Pass, from Sunburst and on. Ridgetop winds over the past 24-hours have been strong out of the East, averaging ~40mph with gusts to the 70’s. Temperatures are warm, mid 20’s at 4,000′ and reaching the upper 30’sF at 1,000′.

Today the storm system will continue to push through and exit the area by Monday. We should pick up another .5-.75″ of rain up to 2,500′ (possibly higher) with 4-7″ of wet snow above this. Ridgetop winds are slated to remain strong in the 30-40mph range from the East. Temperatures should stay warm with highs today around 40F at 1,000′ and up to 30F on the ridgetops. Both precipitation and wind should decrease overnight tonight and temperatures cool off.

For Monday and Tuesday, a colder low pressure system moves past to our South that may push snow/rain and wind our way. If this low is South enough in the Gulf we could see relatively nice skies, stay tuned on tomorrow’s forecast.

*The Center Ridge SNOTEL is not reporting accurate precipitaiton data. Also, the RWIS Turnagain Pass station is down. Precipitation numbers for Turnagain Pass are estimated at ~1″ of water during this storm (past 30 hours).