The avalanche danger will be CONSIDERABLE today at all elevations and aspects above 1,000′ due to new snow and wind. Slab avalanches 8-12+” thick are likely to be triggered on slopes steeper than 30 degrees. These may also occur naturally along with cornice falls. Glide avalanches remain a concern as well and cracks will be obscured by the recent snow and wind.

Travel in avalanche terrain will take expert level snowpack assessment and very cautious route-finding. Safer places to recreate will be on mellow slopes, with nothing steep above you, or in the flats.

**Areas on the periphery, such as Portage Valley, that may receive more snow than forecast will have a HIGH avalanche danger. If you find yourself in a zone with over a foot of new snow travel in avalanche terrain is not recommended.  If you are headed to the Summit Lake area don’t forget to check  Summit Lake Summary  here.

After a week of mostly quiet weather, yesterday ushered in the first – of what looks like a couple – storm systems slated to head our way. Over the past 24-hours the mountains surrounding Turnagain Pass have seen between 8 and 12″ of snow. The storm started out cold with snow to sea level but warm air is arriving and the rain/snow line is now around 1,000′. The cold start to this storm created low density snow and sluffing was the only form of instability seen yesterday. In fact, we had a report of natural sluffs releasing off the Easterly steep slopes near the Byron Glacier trail in Portage Valley.

STORM SLAB:
The low density snow from yesterday is a thing of the past, with a rising rain/snow line and warm temperatures. The 2-3″ of snow that fell last night is expected to be heavy and the additional
6-10″ of snow for today will be even heaver as the rain/snow line is forecast to rise to 2,000′. This is a text-book ‘upside-down’ storm event. This means heavier snow is falling on lighter snow creating a ‘storm slab’ (slab over a weak layer). The weak layer in this case being the light snow from yesterday and slab thickness will depend on how much snow has fallen since last night and through today. This could be anywhere between 5 and 12″. These storm slabs are expected to be on the shallow side at Turnagain Pass but could be much larger in places favored by the storm.

WIND SLAB:
With winds picking up to the 20-40mph range we can expect wind slabs to be forming on leeward slopes. These have the potential to release naturally. They will be thicker than the storm slab, in the 1-2′ range and likely easy to trigger. Travel on wind-loaded slopes is not recommended.

CORNICES:
Cornices will be building today and could fall off naturally. Steer clear of slopes, even mellow slopes, under cornices.

Glide cracks continue to be a concern as they may release and avalanche without warning throughout the forecast region. Keep in mind cracks may be buried by the new snow and will be difficult to see. These cracks cover all aspects within the mid elevation band (between 1000-3000’) and remain a significant threat to popular terrain. As long as glide cracks continue to open up, move and release, we will stress the importance of avoiding them.

Photo below is of a glide crack from the Silvertip drainage on Friday, March 18th – credit Billy Finley. 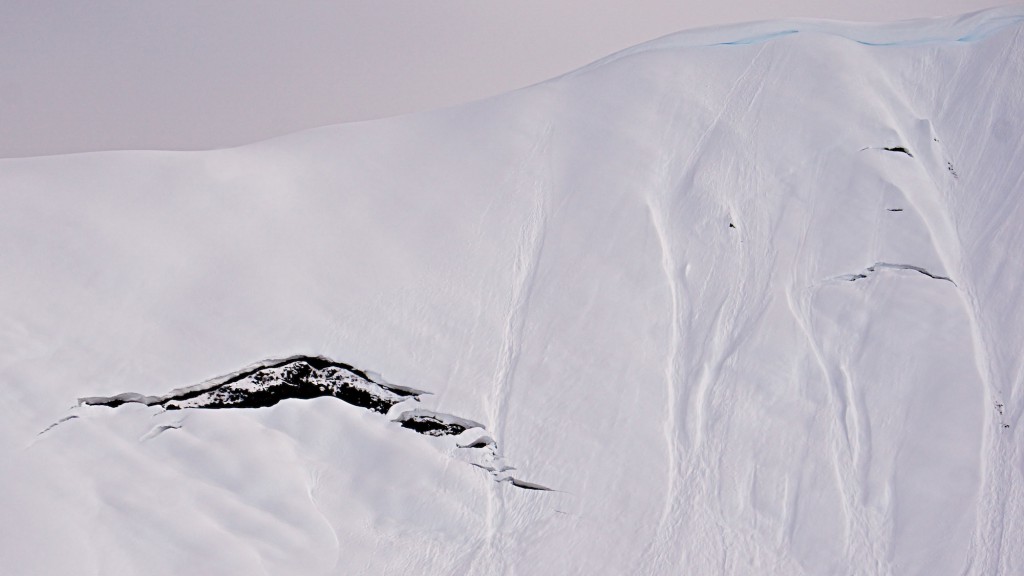 Yesterday, a region-wide snowfall event occurred over most of Southcentral Alaska with the Turnagain Pass area seeing 8-10″ by the late afternoon. Temperatures were cold enough for snow to sea level but have warmed overnight, as of 6am the rain/snow line has risen to ~1,000′ with an additional 2-3″ of snow. Ridgetop winds were light yesterday but have risen overnight as well, averaging 20-25mph with gusts in the 50’s from the East.

Today, the storm will continue. We are expecting another 6-10″ of snow (heavy snow) with a rain/snow line rising has high as 2,000′ (.8″ of rain at the lower elevations). Ridgetop winds should remain strong out of the East averaging 25-40mph. Temperatures are expected to climb to 37F at 1,000′ and the upper 20’sF along the ridgetops.

For tonight, this storm should slowly move out – we could see another 3-5″ at the upper elevations with continued warm temperatures. Monday and Tuesday will be a slight break in weather (light snowfall and breezy winds) before another very large system looks to move in for Wednesday.